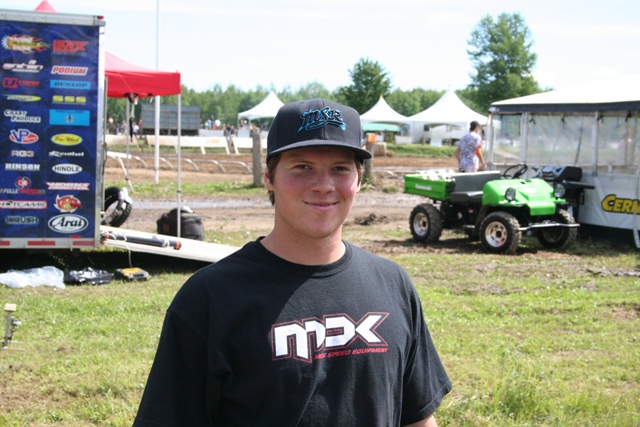 Last summer on a trip to go race in Canada with Nick Wey, I got to meet and hang out with his practice bike guy Big Nasty. I have no clue what his real name is and I don’t think Nick knew either. Anyways, he was a good dude and we kept in touch here and there whenever I’d see him at the races.

Last summer on a trip to go race in Canada with Nick Wey, I got to meet and hang out with his practice bike guy Big Nasty. I have no clue what his real name is and I don’t think Nick knew either. Anyways, he was a good dude and we kept in touch here and there whenever I’d see him at the races.

Recently his career as a mechanic has taken a left turn into the pickle business and I can vouch that he makes some fine pickles. I thought I’d reach out and he could educate all of us on Mandingo Pickles.

Me: Big Nasty, let’s talk pickles. Tell me about Mandingo and how you got into the pickle business?

Big Nasty: Well, about a year ago I was a dirt bike mechanic and helping out some teams. I thought I had something lined up to work on a team and it fell through at the last minute. A friend of mine also had some time on his hands because he’s a truck driver and then there was my brother who was in the same boat as me. It was my brother that noticed pickle sales on the internet was picking up as was the small market of homemade foods. And we just happened to have this old family recipe for pickles (laughs) so we thought we’d make some and see if anyone would buy them.

So we made some and our friends started buying them as well as some local people, we made a website and Google helped us reach out to people. Then people started ordering them around the country! We made some more and sold through them and then made a bigger batch and sold them! We were like, is this for real? And we were on our way. It started as a joke but as kind of worked out pretty well.

So, like, do you have some massive garden somewhere full of cucumbers? Where does all this stuff take place?

Little known fact is that Michigan grows the most cucumbers out of any state in the country and we happened to be right here! Michigan is very diverse when it comes to agriculture Steve. We would go to the local supermarket at first when we started getting into it but as we needed bigger quantities, we got in touch with a local distributor and we try to keep everything local in Michigan. It kind of varies a bit because we had a late harvest here and so when the weather sucks, like in the winter, we have to go to Florida. And then later in the winter we have to look in California or New Mexico, they made some pretty good pickles out there.  It’s actually a pickling cucumber and not a regular cucumber. There’s all these different classes of cucumbers with different sizes, it’s kind of crazy when you get into it.

So no more working on bikes anymore Nasty? This is your full-time job?

(Laughs) Well, I mean, considering I thought this would be a one-time kind of a joke thing, it’s been crazy. Locally around here we’ve been doing well, more and more stores are carrying us and their sales have been going up and up. The internet sales have been doing well, we’ve had some interest from some distributors on the east coast and who knows where it can go from here?

Is your friend that is in with you on this, the same guy that wore a suit to school every day when you guys were trying to be cool?

No it’s not Jumbo, this is my guy Crow-bar.

Is Crow-bar the guy that had a shotgun pulled on him in the front yard when you guys were at that party?

No, that wasn’t Crow-bar. He grew up around the corner of me, he’s my brother’s friend and we were all into racing dirt-bikes.

So you’re the connection to the motocross racing end of Mandingo?

No, not really. Crow-bar raced and was pro for a little bit before becoming a truck driver and he actually drove a couple of teams rigs for a few years. We’re all into it. I did the mechanic thing with Dave Ginolfi and that’s where that sponsorship came from in arenacross. I kind of worked that deal.

He’s giving you guys some love on the podium with the jar of pickles.

So you were Nick Wey’s practice bike mechanic for a while and worked for Ginolfi as his mechanic. Anyone else in there that I might have missed?

I worked with a couple of local guys around Michigan that were doing some pro stuff, I’ve helped out Josh Woods with some stuff. Zach Ames and Travis Sewell as well, my memory isn’t that good.

Too much pickle juice.

Do you envision Mandingo Pickles semi with a bunch of riders under the tent one day?

Oh man, yeah ever since I was a little kid I wanted to be in the dirt bike racing world. I kind of realized that I wasn’t very fast and couldn’t make it that way but if I could be at the races and not be a mechanic, that would be awesome.

Give me your best Nick Wey story.

(Laughs) this isn’t that funny but I almost killed Nick Wey on time. I was his practice bike mechanic and had been on the job for maybe a couple of weeks. We were out at Perris and I was still kind of nervous hanging out with him and the factory guys. I went down to the KTM shop to swap some suspension out and it was kind of the end of the day so everyone was rushing around and trying to get out of there. I just wanted to get the bike back together and get out of their hair.

There was a big triple there, like 120 feet, and Nick wouldn’t jump it for some reason. He finally the next day starts to doing it and about the third or fourth time of him doing it, I see the bike do something funny. I thought that it might have blown up or something like that. Come to find out when he pulled off that the front brake caliper was wrapped around the fork. I was hoping and praying that the bolts broke but nope, they were missing. It was my fault, there was no way around it. He ghosted the bike to me and we got out of there as quick as we could. He wasn’t really happy with me for a little while, you know that fact that he almost died on this massive jump didn’t really sit well with him. I was on suicide watch for a little while and I almost packed my bags and fired myself. As a mechanic, that’s your biggest fear, this was my chance to prove to these guys and I thought I had better find something else to do because I couldn’t handle the pressure.

What are Mandingo Pickles plans for 2010?

When you say helping out, do you give him money or just pickles?

I’m going to be his full-time mechanic this year and we’ll do that for free. That’s the support, it’s the trade-off. He gets my services and we’re his title sponsor. The program is coming together, he’s down at GPF right now getting ready.

What’s the ultimate goal for Mandingo, when would you guys just be swimming in cash?

Well, the short term goal is a distributor or a few of them to do different parts of the country. Then we have to get all of our ducks in a row as far as production and regulations and things like that. So that’s one level and once we get there, start building the brand and come up with some more products like relish and things like that. Just pump up Mandingo as much as we can, get a buy-out from someone and go retire onto an island somewhere (laughs.)

Who knew that Mandingo Pickles would be so successful?

Yeah for sure, I mean, canned food? I never would have dreamed that I would be doing something like this. We’re doing it on our own terms, our own way and people are really liking it and we’re growing.

Let me ask you this, whose recipe is it?

The normal dill has been made by our family for a long time and the hot one was Crow-bar’s parents, they’re more into the spicy stuff. So he came up with the formula for the hot ones. The paper that the recipe was written down on all those years ago is under lock and key, like the Coke formula.

My wife and I are pickle people so let me ask you this, there’s an aisle in our grocery store that has all these kinds of pickles in it and then there is the refrigerated section that has some other ones that are better and more expensive. What’s the difference?

When you have your big pickle companies that do crazy mass production, they do what’s called open vat. It’s really like a giant above ground swimming pool and bird poop, dirt whatever gets in there. The UV light from the sun kills some of the bacteria that would grow in there, so they scoop them out of there and use artificial preservatives and food coloring in them. That’s why you can see they are so yellow. The ones that are more gourmet, in the cooler and more expensive like ours those are usually fresh-packed. We get all of our ingredients fresh, we wash them all down and do everything right there. We pack them right there and part of our process is speeding up the fragmentation so you get the taste into the pickle a lot sooner than letting it sit outside for months on end. With ours, what you see in the jar is what you get, the peppers, garlic and whatever are right there. It’s not some crazy formula that a scientist came up with in a lab.

Time for a mailbag!