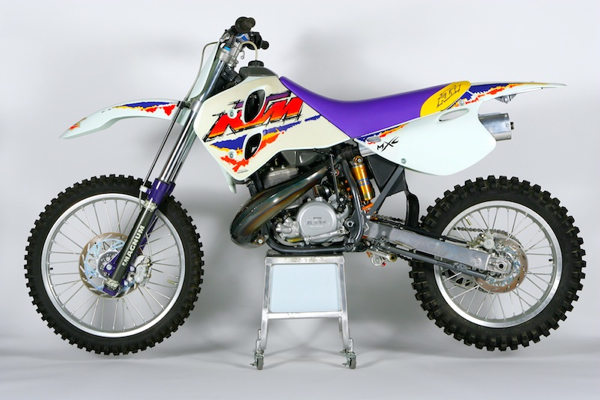 For this week’s Classic Steel we are going to look back at the biggest and baddest of the nineties big bores, the 1995 KTM 550 M/XC.

For this week’s Classic Steel we are going to look back at the biggest and baddest of the nineties big bores, the 1995 KTM 550 M/XC.

Today, KTM is riding a wave of success both on and off the track.  Their bikes have enjoyed critical praise and the racing teams have captured victories in every off-road discipline under the sun.  After all this success, it is hard to remember than not so long ago, the little company from Mattighofen Austria nearly faded out of existence.

Austrian engineer Hans Trunkenpolz founded KTM in 1934. Originally a metal working firm, they had expanded to building motorcycles and scooters by the mid-fifties. Over the decades KTM had enjoyed a good deal of success, but by the early nineties, the company was falling on hard times. The low point came in 1991, when falling sales forced the company into bankruptcy proceedings.  As a result of the bankruptcy, the company was forced into a financial restructuring and divided into four separate divisions.  The new KTM had separate operations for radiators, motorcycles, bicycles and tool manufacturing.  The motorcycle division became KTM Sportmotorcycle AG and focused their resources primarily on the off-road motorcycling market.

One of the innovative ideas the new KTM would employ would be to leverage their smaller, more nimble R&D and manufacturing departments to produce niche bikes in categories not being served by the Big Four Japanese brands. This would lead KTM to develop all sorts of different size machines in every imaginable off road category. If you were looking for something a little different than your average  cookie-cutter machine, KTM was quickly becoming the place to shop.

Because KTM was so willing to experiment, you could get your bike in nearly any size or flavor. In the mid-nineties if you wanted to ride a KTM open bike, you could race a 360cc, 440cc, 500cc, or 550cc version.  Some years they even offered a 300cc version of the 250 for those looking for a little extra edge. Bikes like the KTM 550 are a perfect example of this “hit them where they aren’t” philosophy.

In 1994, KTM USA took a hard look at the falling sales of 500cc motocross machines and decided it was time try something a little different. Their 500 at that point was getting a little long in the tooth, with the basic machine dating back to the mid-eighties. The bodywork had been freshened slightly with the new KTM look debuted on the ’93 250 SX, but underneath that new plastic was a very old school machine. Unfortunately, an all-new bike was not in the budget, so KTM went looking for ways to give their stale open classer a new lease on life.

The idea the US team came up with was to shoehorn the mega motor out of one of KTM’s European sidecar race bikes into their existing KTM 500 chassis. The bike would be exclusively for the US market (Our love of big motors has always been slightly lost on the Europeans) and look to cater to the horsepower loonies that thought that a CR500 was just not enough. If you were a bigger-is-better kind of guy, KTM had your machine.

The heart of the big KTM was its 550cc monster of a motor. The 550 was a bored and stroked version of the original 500 KTM mill that had been used by riders like Kurt Nicoll and Kees Van der Ven for what seemed like centuries. The additional displacement gave the 550 a very different feel than the 500 it was based on. It was equipped with a heavy flywheel and produced a very smooth power delivery. The powerband was actually far mellower than you would normally expect from such a large motor. Low-end power was abundant, but not explosive. The mid-range, however, was where the big 550 really started to flex its muscles. It came on strong and left other 500’s in its dust as the climbed into the meat of the power. After its massive midrange blast, the power tapered off into a lackluster top end. Compared to the Honda and Kawasaki 500’s, the KTM was less powerful at the extremes of its power curve. It was only in the mid-range that its displacement advantage resulted in more power.

The motor on the big Ka-toom was held back somewhat by its recalcitrant drivetrain. Shifting on the 550 was best executed with a heavy boot and a degree of patience. Missed shift and false neutrals were unfortunately a common occurrence. Not aiding the situation was its near worthless clutch that would start slipping at the slightest provocation. Thankfully the bike’s mountainous torque made shifting and abusing the clutch mostly unnecessary.

One of the big changes made by KTM for ’95 was the decision to ditch its long time suspension partner White Power. For years, KTM had suffered scathing reviews in the American press over the performance of Dutch made components. Year in and year out, they were improperly set up and out of step with America’s style of racing. In an attempt to finally appease American consumers, KTM made the switched to Italian made Marzocchi Magnum conventional forks and a premium Swedish Ohlins shock for ‘95.

The performance of the Marzocchi Magnum forks was a huge step up for the Austrian bike. With the change to Marzocchi’s, KTM went from having the worst forks in ’94 to the having the best forks for ’95. The conventional Magnum’s provided a super plush ride on the small stuff while taking the big hits with aplomb. They combined the comfort of the KX with the bottoming resistance of the Honda. The Magnum’s only real flaw was its longevity, as the forks tended to eat seals at an alarming rate.

In the rear, the Ohlins shock was likewise a huge upgrade on the 550. It provided a plush ride over small chop, but was a little too soft on big hits. On G-outs and hard landings the shock tended to blow through its stroke a little too quickly. If you were going to do more off-roading than MX, the setup was near perfect, but for hard core Moto it could have used a stiffer rear spring.

One area that was not improved on the ’95 550 was handling. The big KTM’s chassis dated back to the mid-eighties and it showed. It was a big, tall and heavy bike that felt even heavier than it was. In turns the bike did not like to be leaned over and preferred to be steered around the outside. The best way to execute a tight turn was to brake-slide in and blast out.  The big KTM was definitely more of an old school, “point-and-shoot” open bike. If the track was tight, the bike could be a real handful. It was much better suited to faster, more wide-open layouts.

KTM’s niche marketing plan continues to this day. They produce machines that no one else has the cojones to make. Sometimes they are huge sales success stories, like the current 350 SX-F. While others, like this 550, have faded into obscurity. The KTM 550 M/XC was certainly not about to turn the tide for big-bore two strokes here in the US. It made a good desert sled for riders looking to do more than motocross, but for MX it was a bit of overkill. It was a big, powerful, monster of a bike that demanded respect and required restraint to make work. It may not have been the best or most popular of KTM’s niche experiments, but it showed their willingness to try different things and push the envelope of design. It is that fearless, enterprising spirit that has made them the powerhouse that they are today.