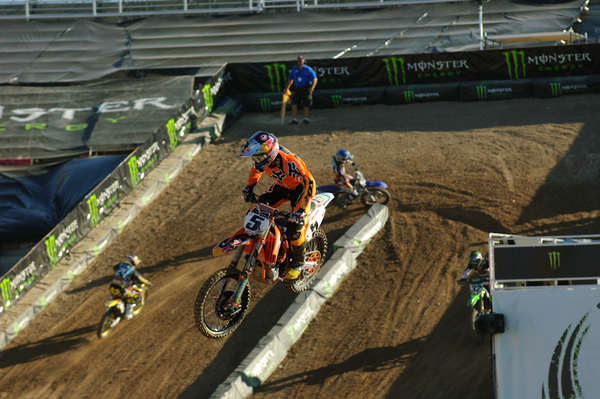 Was the Monster Energy Cup a success or not? Myself and Swizzle hash it out.

Was the Monster Energy Cup a success or not? Myself and Swizzle hash it out.

Swizcore: Typically when you set forth on an endeavor, the only way to claim success at its conclusion is if your goals were met.

Aside from actually having to award the Monster Million(well, that remains to be seen, check back with RV in 20 years), the Monster Energy Cup fell pretty much flat on its face in terms of accomplishing its goals. Let’s look at the event shall we?

The track, while a very cool hybrid layout, was too skinny, utilized absolutely terrible dirt for the out-of-stadium section (dangerous even), and offered no creative option-lines therefore the racing was single file all night. Unless you were a fed-up Kevin Windham showing Frieze how it’s really done (endearing himself to just about everyone in the class in doing so), a rider with a personal vendetta and an opportunity, or the theoretical battle for first and all the cash on the line; but we know that never materialized either, the racing was lacking all night.

So the racing was boring, next point.

This off-season exhibition race was intended to bring out some new toys, in-helmet communication, over-bores, 2 strokes, traction control, a partridge in a pear tree… lots of cool stuff that is outside the rules during the standard Supercross season. Well there’s one little problem with the prospect of all this “new, cool” in a race such as this. There’s a freaking MILLION dollars on the line! What team is going to essentially use the opportunity to win a cool-mil as a high stakes bike test? No one, that’s who. You’re going to line up with the freshest, most reliably prepared 450 you’ve ever assembled. The thing you’re definitely NOT going to do is introduce new bike systems, apparatus or technologies which make your rider anything less than as close to 100% comfortable as they can be. That means what they are used to racing is what they’re gonna race.

There were many names not participating which really affected the success of the event. Stewart is still flirting with his 2012 decision, Reed is taking a vacation after his first season as racer/owner, Shorty is just starting to ride again, Grant as well, Pourcel is across the pond and Trey is prepping for his 2012 domination (that was for you Ping). With so many names from the top of the class not racing, it had a negative effect on the on-track action. Is it really a surprise that 2011’s champ of everything won all 3 mains? Dungey was on his KTM for 8 days. Who else was going to dethrone RV? I will say though, Brett Metcalfe was extremely impressive. For a dude who admits it takes him a few rounds to get going in a series, he looked great.

The only way a race format such as the Monster Energy Cup and it’s “run whatcha brung” concept could work is if they pretty much did the opposite of what they did.

First, and this is a big one, ditch the “million dollars”. It makes the stakes too great and the chances of a team being a little experimental go right out the window. A million dollars on the line changes the mind-set of the team and subsequently the rider. The stakes are too high and with a 3-race format the mindset was more “don’t screw up”, than “attack like a rabid dog”(unless you’re RV who actually is a rabid dog).

The trickiest of propositions for this event is how to get the teams to embrace the non-standard technologies for the race. Make it a requirement? Loosen the rules during the Supercross series? Like I said, tricky. One way that it doesn’t work, is making it optional when $1,000,000.00 is on the line.

I love the multiple short main format, it will work awesome in an actual Supercross series. The format’s main hurdle at the M.E. Cup was the skinny, no-pass-inspiring track and missing many of the top guns of racing.

In my eyes, the most intriguing action of the night was watching Cianciarulo and Justin Hill race, we didn’t see much of them but even that glimpse was more compelling than the rest of the action.

I had lofty expectations for this race but there were foreseen shortcomings (racer turnout) as well as unforeseen(bad track for passing) which really made it a failure in my eyes. I hope the multi-main format makes it to the standard series, it’s needed and I really wonder if the track would have been a success in another venue with better dirt, that baked shit in Vegas isn’t good for passing anyway.

Matthes: Man, Swizzle really blew this race out of the water! I see what he’s saying and agree with some of it but in the end, the words “made it a failure” to me are a bit harsh. Then again I was actually at the race and distracted by all the pretty girls, energy drinks and Tits Legendary cheering like a little girl for Dungey next to me in the press box. In short, I had a lot going on while Swizzle was on his couch seeing if Speed TV could entertain him (the thought of Swizzle dressed like a gladiator in his living room yelling “We are NOT entertained” at the TV does make me chuckle) and I guess in his eyes, the Monster Energy Cup fell short of that.

To me though, I’d go with this recap of the event- Not bad, not great and some things need to be fixed next year. The million dollars that Swizzle says needs to go? He’s drunk and high, that’s an awesome idea and will maybe attract outside media to the sport. After all the NASCAR All-Star race that awards a million buck prize seems to get the attention of Yahoo, Google and all that. Keep that money right there where it belongs. In a glass case on top of the starting line doghouse.

The run-what-you-brung? Uh, yeah this was a case of talk-about-what-the-teams-didn’t-do. The only people that really took advantage of this were the announcers that went on and on about it. This concept was great in theory but bad in actual follow-through. No one is going to invest in this for one race and let’s face it, the AMA rulebook is already looser than a mom at the Loretta Lynn’s campfire with too many Smirnov’s in her. The teams are already doing everything they can to put a winning bike out there. There’s nothing they are holding back that is earth shattering.

I’d shorten the laps, build a better track and get some Euros over here if it were my race. The fine folks at Feld deserve credit for trying to do something different and that’s all I’ve been saying (look it up, I feel like a broken record) for a while now. Switch things up and try to make Supercross even more exciting. Once in a while when you’re trying to make an omelet, you’ll break some eggs. No big deal to me, this race has high potential and I’m not ready to write it off like my little buddy Swizzle is.

Swizcore: First of all, the fact that Matthes described TO A TEE how I was dressed and behaving during the race has me rethinking this whole “technology is good” concept. Maybe I went a little over the top with my initial argument? I didn’t mean to come across like the race was a steaming pile of cow dung. That they should just scrap it and chalk it up to a bad idea with poor execution. Not at all. I also applaud them for showing the initiative to try something new. I just think that due to the reasons I laid out previously, this attempt fell way short of what it could be. I hope it does come back and they tend to it’s failings because they are GLARING. It’s too bad Vegas has such shitty dirt because that city really is the perfect location for such a race.

Make it part of the Supercross series, maybe even the series finale.

Move it to a city with comparable social make-up but far better dirt.

That’s it. Making it part of the series solves the issue of any big names no-showing(unless they are already injured) and changing the location makes actual racing more likely due to a better track surface. The “anything-goes” bike tech is moot, no one is going to bother with it until it is a season spanning permission.

Matthes: Your ideas are ridiculous, you’ve clearly high and drunk. Or both. Of course the race has to be in Vegas, it’s Vegas! People can go and check out the race, then have fun in the city afterwards. What you want to hold it in St Louis?

And it can’t be just another supercross, we already have 17 of those and don’t need another. It wasn’t perfect but the attempt was there. It wasn’t a swing and a miss by any means, it was a hard double up the middle. With some tweaks, it could be a home run.

Observations from the Monster Energy Cup