For this edition of Classic Steel, we are going to take a look back at Steve Lamson’s 2002 Fast By Ferracci DKNY Husqvarna 250CR. 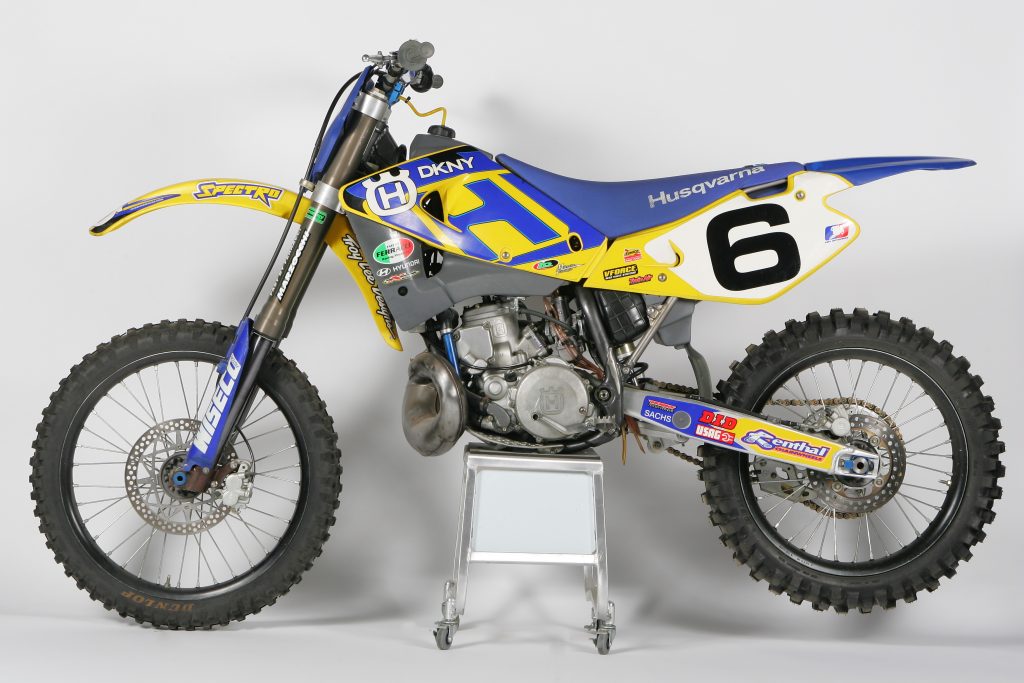 When Steve Lamson made the move to Husqvarna in 2001 it shocked a lot of people. There were rumors of a one-million-dollar championship bonus and a $250,000 salary. In the end, the lure of such a lucrative deal was too tempting to resist for the two-time champ and he left a less-profitable Honda deal on the table to sign with the new team.  Photo Credit: Stephan LeGrand

Husqvarna has a long storied history in motocross. Going all the way back to the late fifties, Husqvarnas have been at the forefront of the sport. In the early sixties, it was the new lightweight two-stroke Husqvarnas that helped push the big four-strokes out of the sport. When motocross started moving back to four-strokes in the early nineties, it was Husqvarna once again at the forefront of that movement.  Over the years, Husqvarna has won sixteen World Motocross titles and countless off-road crowns.  Unfortunately, however, all of that overseas success has rarely translated to this side of the pond. 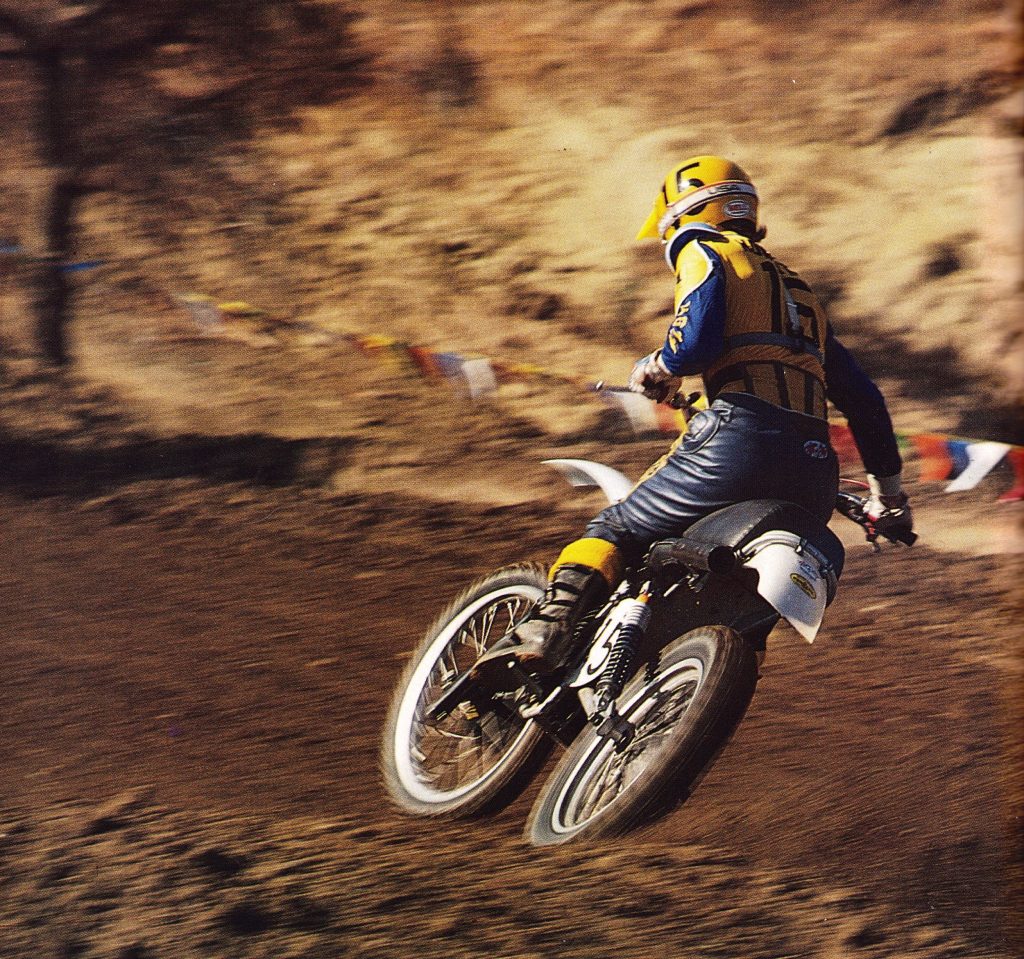 Prior to 2001, Husqvarna’s last major US title had come at the hands of Kent Howerton in 1976. With Steve Lamson on the new Fast By Ferracci squad for ’01, there was thought some of that glory could be recaptured. It was not to be. Photo Credit: Motocross Action.

In the seventies and early eighties, Husqvarna enjoyed its greatest success here in America.  With riders like Brad Lackey, Gary Semics, Kent Howerton, Mark Blackwell, Marty Tripes and Dick Burleson at the controls, the Swedish brand captured countless race victories and several major titles. In motocross, they captured the 1976 500 National Motocross title and off-road, they scored an astounding sixteen  AMA National Enduro titles in a row.

Lamson struggled mightily on his two years on the Fast By Ferracci Husqvarna squad.  In Supercross ‘01, he finished the season in nineteenth overall (one place in front of Husky teammate Jason Thomas). In ’02, he faired even worse, only making it through one round before ending his season with a broken leg.  Photo Credit: Ken Faught

By the mid-eighties, Husqvarna found itself in a major crossroads. In motocross, they were no longer really competitive against the best from Japan. As the sport had transitioned to be more Supercross-focused, the Swedish had been slow to adapt and resistant to change. Off-road, they were still competitive, but outside of the woods, they were a niche player. 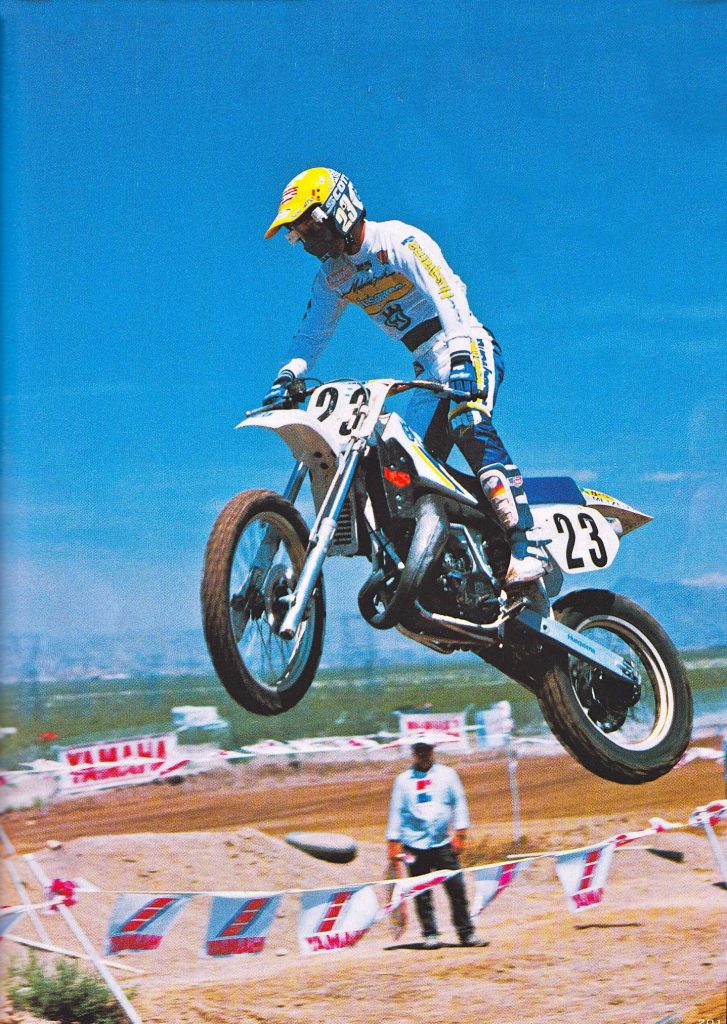 In 1987, Husqvarna decided to cut its losses and sell off the motorcycle division to Italian motorcycle giant Cagiva. Even though the new owners continued to produce motocross models, they had very little interest in promoting them in the USA. In Europe they thrived, winning the ’93 500 and ’97-’99 125 World Motocross titles, but in America, they were little more than a curiosity. 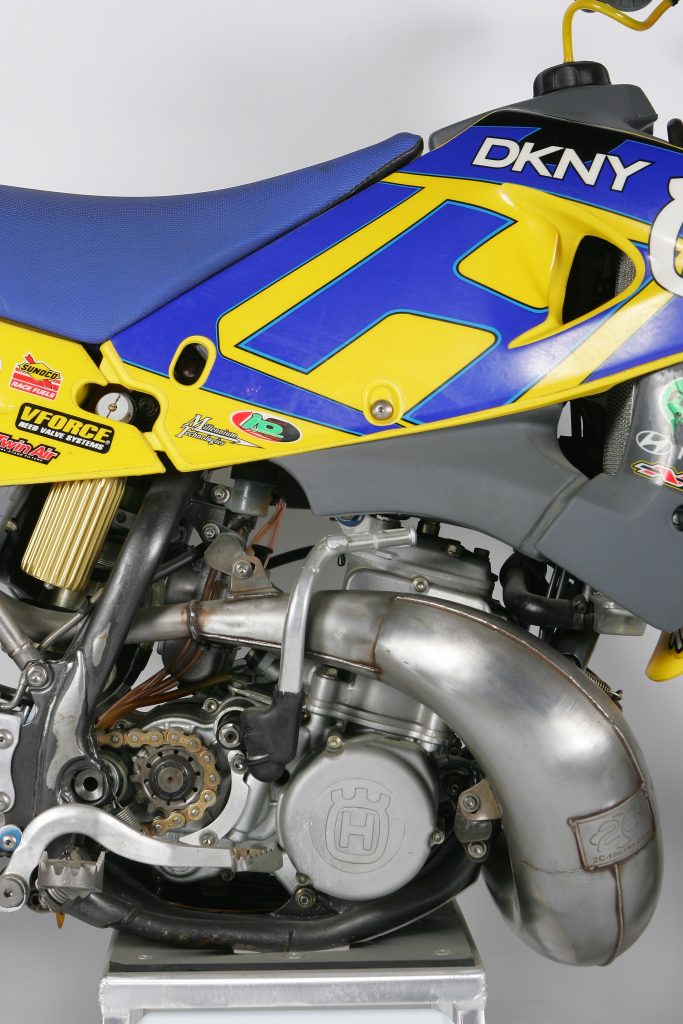 The stock Husky 250CR motor was already pretty long-in-the-tooth by the time Fast By Ferracci decided to field a team in 2000. Dating back to the early nineties, it was painfully slow and not really the best platform to build a race motor from.  Lamson’s works motor was fast but hard to ride and not in the same league as the class-leading RM and YZ mills in ’02. Photo Credit: Stephan LeGrand

Husqvarna’s reemergence into the American motocross circuit would be brought about by the convergence of two events. The first would be the clinching of a third straight 125 World Motocross title for Husqvarna by Alessio Chiodi. The second would be the decision by Fast By Ferracci owner Eraldo Ferracci to pull out of road racing at the end of the 1999 season. 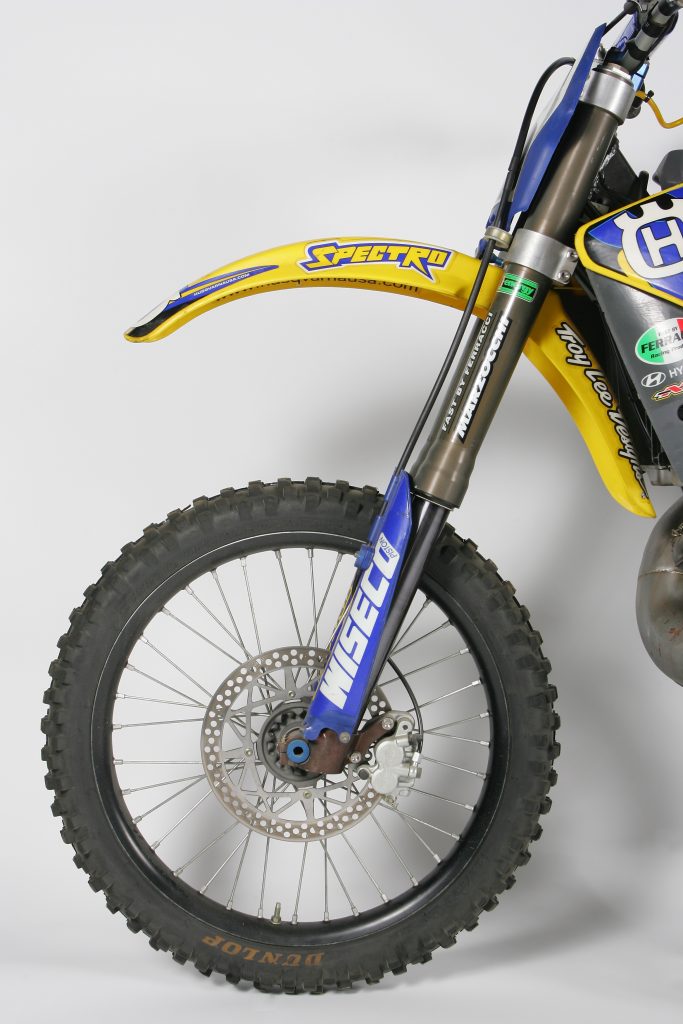 Lamson’s works bike featured Marzocchi ‘s latest 50mm works forks and oversized Brembo rotors. When Lamson first came to the team one of his major complaints was with the suspension. Ferracci had extensive road race experience, but very little motocross knowledge. Lamson’s teammate Jason Thomas told me that the entire 2001 season was more or less a learning year for the team as they tried to adapt to the new discipline. Photo Credit: Stephan LeGrand

After several successful seasons in road racing, Ferracci was looking for new challenges at the end of 1999. Eventually, that challenge would turn out to be motocross. At the time, Ferracci was the US distributor for Husqvarna, and the thought was that a motocross team would help him perk up the lagging sales of the Italian bikes in the US. 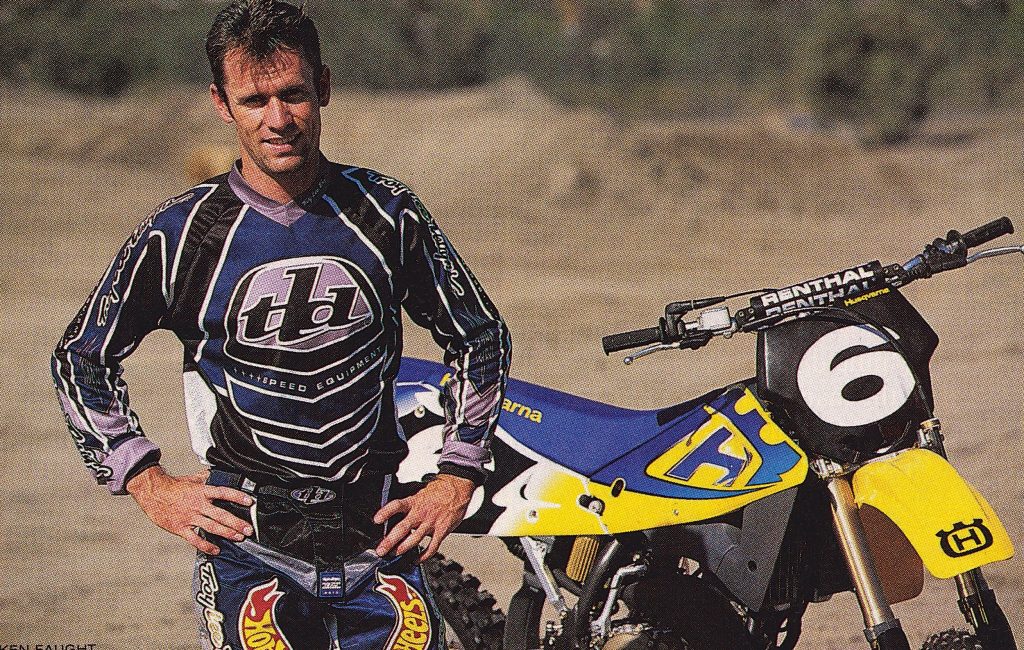 By most metrics other than Steve’s bank account, the Lamson/Husqvarna pairing was not a successful one. Photo Credit: Ken Faught.

Coinciding with the formation of Ferracci’s new motocross team was the desire of Alessio Chiodi to come race in America. After capturing his third consecutive crown, the diminutive Italian was looking for new frontiers to conquer. Like Greg Albertyn and Sebastian Tortelli before him, he felt that that new frontier should be America. With Chiodi already racing Husqvarnas in Europe, the new Ferracci team looked to be a perfect fit for the reigning 125 World champion. 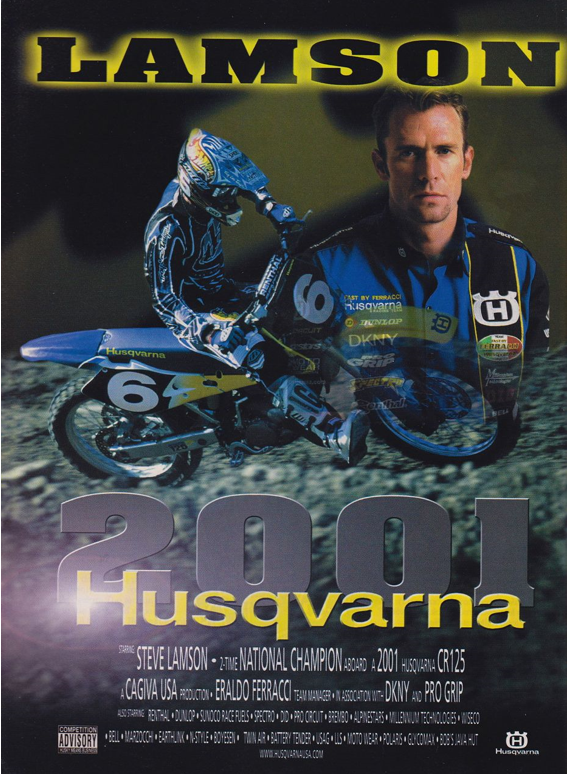 The move of Lamson to Husqvarna was big news in 2001.

Unfortunately, Chiodi’s 2000 season would not go as expected. A pre-season injury would prevent the Italian from making the splash many expected and put him on the sidelines for the entire 2000 Supercross season. In the end, his only 2000 on-track result would be a dismal twenty-ninth place finish at the motocross season opener in May. At the end of the season, Chiodi would pack his bags and head back to Europe for good. 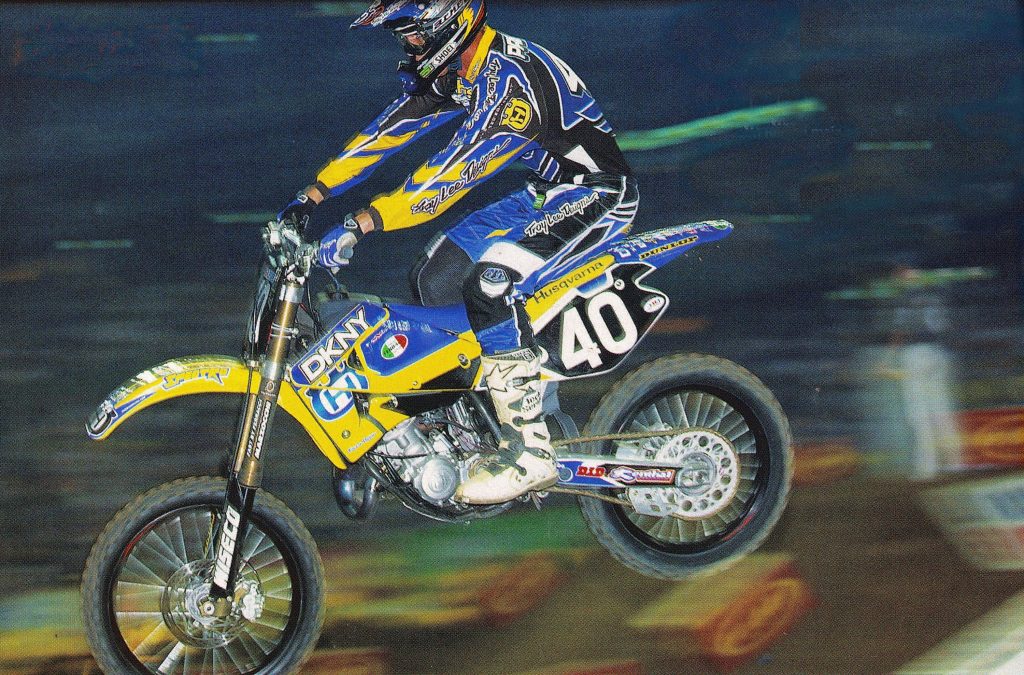 Travis Preston’s surprising victory at Houston in ’01 would turn out to be the sole highlight of the three-year Fast By Ferracci motocross experiment. Photo Credit: Scott Hoffman

After Chiodi’s departure, Ferracci would turn to a mix of young talent and veterans to campaign his Italian machines. His 2001 team would be led by two-time 125 National Motocross champion Steve Lamson. Joining the longtime AMA pro would be journeyman racers Travis Preston,  Jason Thomas, and Chris Gosselaar. 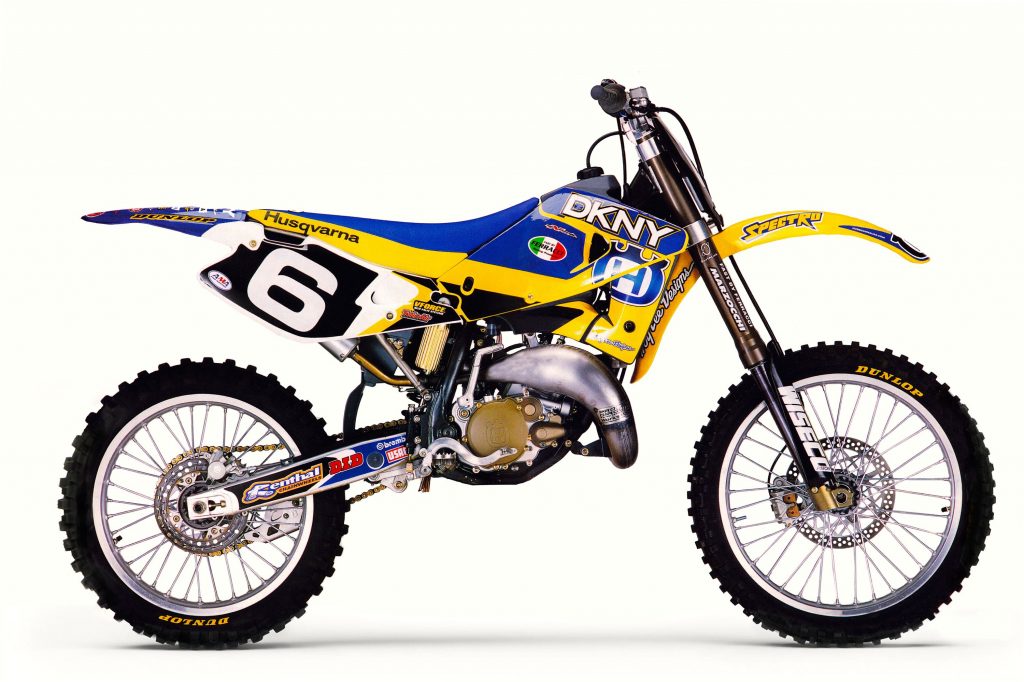 While not a great bike, Lamson’s 125 was at least moderately competitive with the other 125s of the time. Due to the success of Chiodi in Europe, Husqvarna had continued to develop the 125 platform, while allowing the 250 machine to languish unchanged. Photo Credit: MX Racer

The sole highlight of the 2001 season would turn out be the surprising  125 victory of Travis Preston in Houston.  After nailing down second place, Preston would be handed this win by Grant Langston, when the KTM star cartwheeled his machine with only turns to go. This victory would be the first for Husky since the heyday of Kent Howerton in the seventies. 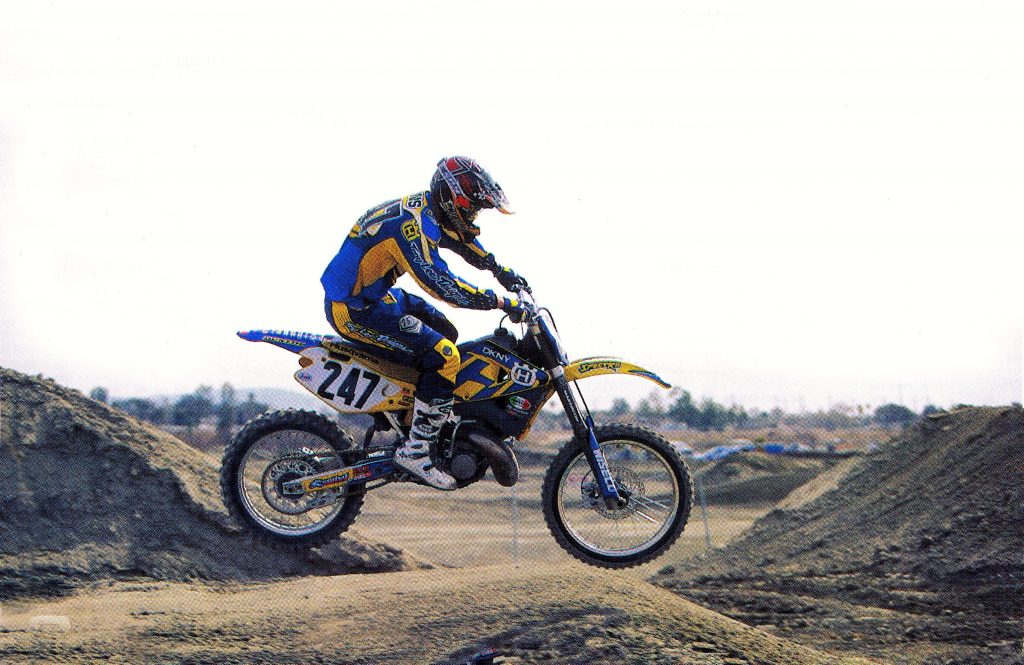 Journeyman Tyler Evans would join the Fast By Ferracci team half way through he 2002 season. A nineteenth at Unadilla would be his best finish on the team. Godspeed One Punch. Photo Credit: Transworld MX

In the 250 class, Lamson would score an eighth at Atlanta, but struggle to crack the top-ten the remainder of the Supercross season. Outdoors, he would step down to the 125 and fair slightly better, scoring a seventh at Red Bud and a sixth to round out the season. After a season of growing pains, it was hoped that better things were ahead for Lamson and the Ferracci team. 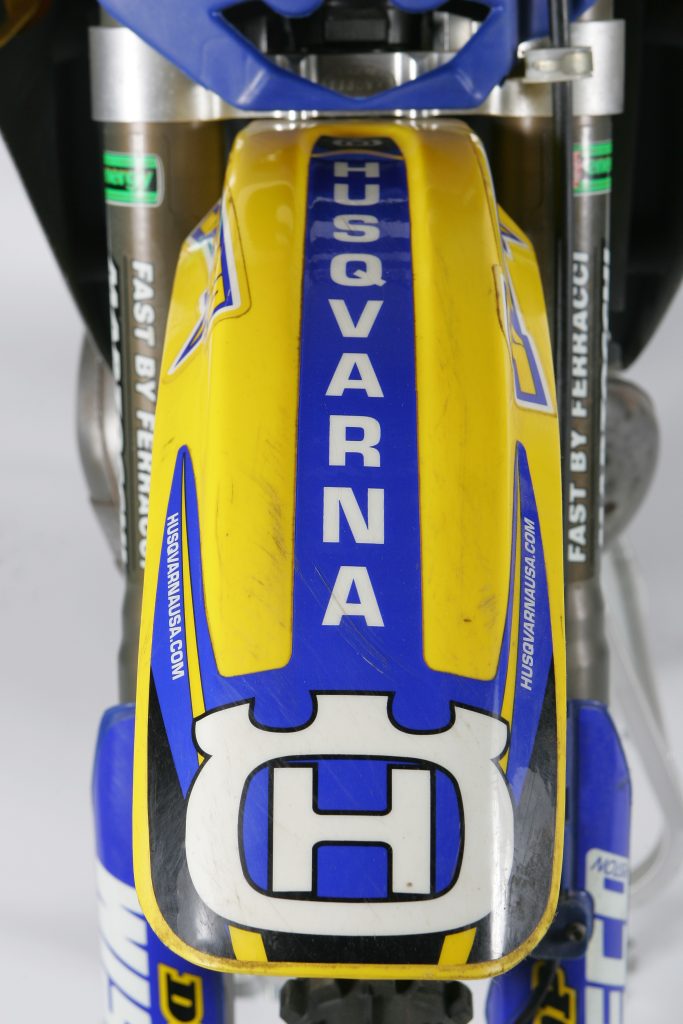 A hundred years of motorcycle heritage was not enough to power Husqvarna to the front in the early 2000s. Photo Credit: Stephan LeGrand

Unfortunately, however, that was not to be. After a sixteenth at the opener, Lamson would suffer a crash and a broken leg at round two. This would effectively end his 2002 Supercross campaign. Outdoors, things would only get marginally better. On the 250CR, he would fail to score a single top-ten finish and round out the series in a disappointing twenty-fourth place. 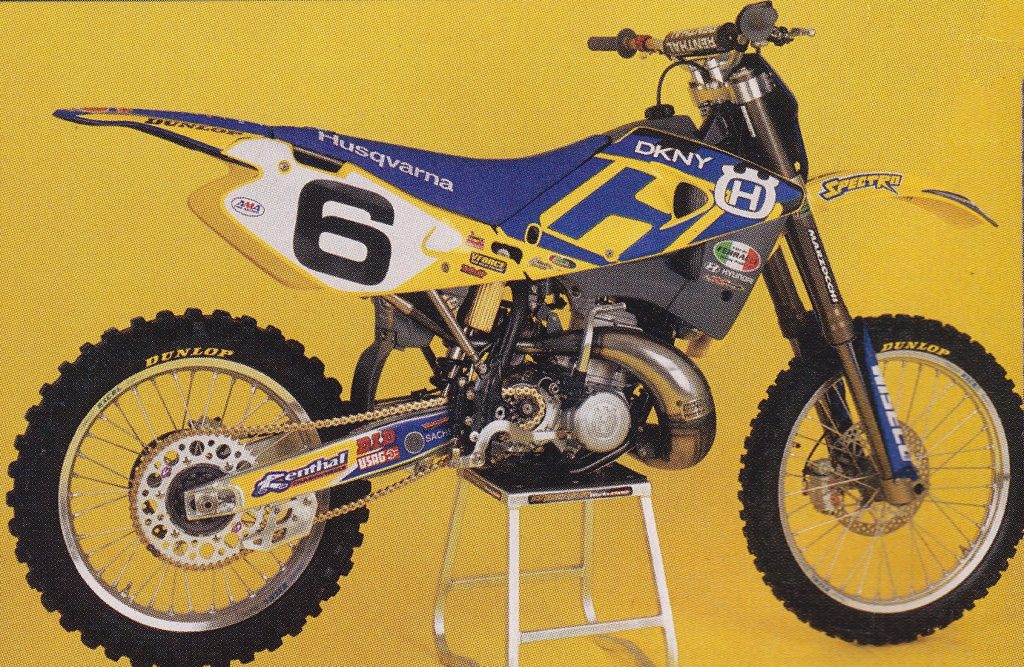 When I asked Lamson’s Fast By Ferracci teammate Jason Thomas for his take on their race bikes, he was complimentary of all the hard work the team put in to try and improve the bikes. He stated that the Ferracci did the best they could, but the stock 250CR was so far behind, to begin with, it was hard to make them competitive. Photo Credit: Dirt Rider

Eventually, financial troubles and a flooded manufacturing plant back in Italy would spell the end to the Fast By Ferracci’s motocross effort. After three years, two big stars and a plethora of journeymen racers, all the team had to show for their efforts was a single 125 Supercross win. The team had faced a steep learning curve, switching from road racing to motocross. In the end, they did the best they could with antiquated equipment. For Lamson and Husqvarna, it was an experiment that both would probably rather forget.