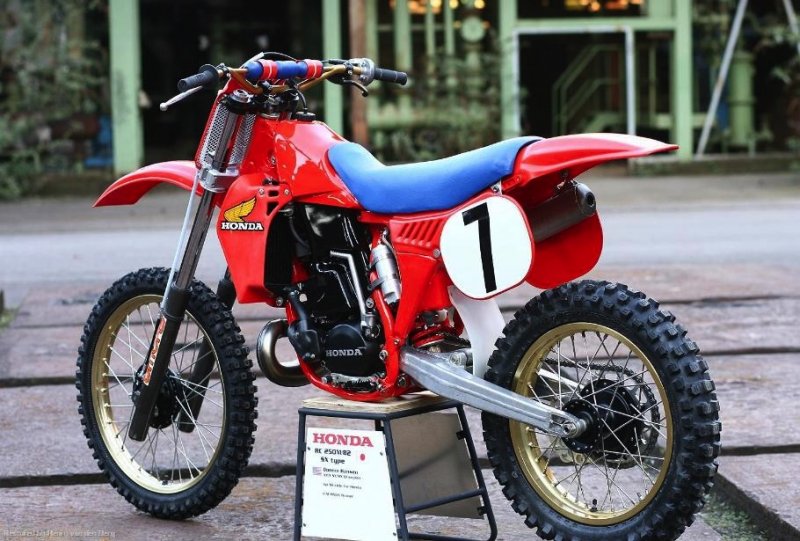 Blazier, DanDunes and myself look back on our favorite works bikes.

Blazier, DanDunes and myself look back on our favorite works bikes.

There’s no doubt about it, we’re living right now in the technological glory years when it comes to dirt bikes right now. Fuel-injection, aluminum frames, titanium everywhere, variable ignition mapping, name brand aftermarket parts coming on production bikes- you name it and the bikes have never been better. And add in the factories still hard at work trying to make their race bikes better than ever so that they can win on a Saturday and we have a special time happening right now.

But there was an era where what the superstars of the sport rode was something vastly different than what you had in your garage. The OEM’s have always used racing to make the bikes they sell better but back in the day, man, those machines were something special. The era of when works bikes, true works bikes- not warmed over production bikes that we have now, roamed the earth. These machines were something else, something radical and things were different back then.

So with that in mind, myself, Tony Blazier and DanDunes of Promototalk.com got together to make a list of our five favorite works bikes from the golden ago of motocross. Here’s Dan’s selections-

One thing that works bikes generated was fear, the fear that every other rider feels when one of these futuristic machines pulled up on the line next to them. That is why I had to include Honda’s first AMA Motocross and Supercross championship-winning bike, Donnie Hansen’s 1982 RC250, at the top of my list. I mean, look at that sexy beast! Could you imagine sitting at the gate on your production bike next to that thing and thinking for one second that you had a chance? You would feel like a kid with a sling shot going up against Rambo with a bazooka.

If I was being honest, all five of my factory favorites would be works Hondas from 1981 until the production rule came into effect in 1986. Each was a handmade work of art, but at the risk of making this a homage to works Hondas of the 80’s, I chose the bike that started their domination: Holeshot Hansen’s weapon of 1982 that won Factory Honda their first-ever 250 AMA SX and MX Championships.

This bike was so far ahead of where production bikes were that it was silly to even try to compare them side by side. Every nut and bolt was titanium, and the rest of the bike was constructed of chromoly and magnesium. Then there were the engineering anomalies, like the tank that extended super-low for handling and the tunnel they created on top of the tank to get air flowing to the air box. To kids, like me at the time, this bike might as well have said NASA on the side instead of Honda.

There is no works bike before or since that changed the history of motocross like Doug Henry’s 1997 YZM 400, the only “true” works bike in the AMA since the inception of the production rule. The production rule was put into effect in ’86 to protect privateers from having to battle $100,000 engineering marvels, but Yamaha somehow worked out an exemption and worked within the highly lopsided double-displacement rule with the AMA to further four stroke development. I’m not going to turn this into a two-stroke four-stroke debate, but this bike was a 100% prototype machine and went against every production rule in the book. Because of these freedoms, Doug Henry’s YZM 400 was the trickest handmade machine to ever shred a motocross or supercross track.

The bike was an ultra-success from the day it was introduced. Doug Henry raced the early part of the ‘97 season with the YZ250, but an injury forced him out of the series. After the success of the YZM400 program with Andrea Bartolini and Peter Johansson in the FIM Motocross World Championships in Europe, Henry returned to racing later in the year on the four stroke full time. The move was a shock to nearly everyone, and I remember thinking that there was no way a four-stroke could compete at the top levels. Well, in the first three rounds of the 1997 Nationals, Henry finished 8th, 4th and 6th overall and had me second guessing myself, then came the 1997 Las Vegas SX and the day of the apocalypse for two-stroke lovers around the world.

With Doug completely out of the championship from his earlier hand injury, he decided to ride the bike in Supercross. At most Supercross races, this might not have gone as well, but on the blue-grooved hard pack in Vegas, the four-stroke’s power delivery and Henry’s throttle control were untouchable. Doug started the night as the first-ever four-stroke rider to win a SX heat race and ended the night with the first-ever four-stroke AMA Supercross main event win. He went on to later win the ’98 AMA 250 Motocross Championship on the bike, but that night in Vegas on May 17th, 1997 will forever be known as the beginning of the end for two-strokes and motocross as we knew it.

The next bike on my list is the 1994 RH250 that Greg Albertyn won his third and final World Championship on. I was on the RM250 at the time and thought there was no way the bike could win a local pro race at Chicken Licks raceway, let alone a World Championship. Then I saw this marvel and was blown away.

Nothing on it looked like the production bike other than the plastics. The first thing that stood out was the cone pipe, but that was just the beginning. The frame geometry is completely different, handmade specifically for Albee. It has the sickest, hand-fabricated alloy tank and the handmade titanium exhaust. Add on the factory hubs, linkage, handmade factory swing arm, one of the most powerful engines of its day and Albee’s ability, and the bike turns into a championship-winning monster.  For anyone that rode the ‘93-‘95 production Suzukis—including the whole U.S. factory Suzuki team—this bike was a wet dream.

The bike was Stefan Evert’s ’93 molded to fit Albee’s riding style. It took a lot of testing to get it right, but in the end, it paid off with him edging out Evert’s for the World Championship once again in ‘94. Albee says the bike was better than the 1995 Factory RM250 he rode in his debut in the AMA Motocross Championship. The championship-winning 1994 RH250 sits in Albee’s garage in South Africa to this day.

My next choice is Johnny “O’Show” Omara’s 1980 Mugen ME125. Mugen was a Japanese engine-building company and brainchild of Hirotoshi Honda, son of the founder of Honda Motor Company, and Masao Kimura. In the beginning, Hirotoshi and Kimura focused on and had decorated success building Formula race car engines based on the Honda Civic, but in 1976, they re-routed some of that focus over to developing motocross bikes. Right out of the gate, the company enjoyed some success in the All-Japanese Motocross and, later in ‘76, won the Japanese Grand Prix with Hideki Suzuki riding their new  ME250 that was based on the CR250.

While the Mugen tasted some success overseas between 1976 and 1979, most people in the States had never seen or even heard of a Mugen. That was until late 1979 when Mugen USA was established in California and a local teenager, Johnny Omara, was signed by Hirotoshi and Al Baker—a bike shop owner in Southern California, the U.S. distributor of Mugen and Omara’s good friend and mentor—to ride the factory version.

Johnny was not known around the national moto scene yet, but at my local track, Indian Dunes, he was becoming a local hero. I was nine years old at the time, and Johnny had everything a nine year old motocross racer wanted: incredible speed, style for days, good looks, and a beautiful white and red works Mugen underneath him. He was a legend in the making.

When Johnny first showed up at Indian Dunes to test with the Mugen, nobody knew what to think. The white bike with Johnny’s all white gear was awe-inspiring. What the hell is a Mugen? Why does it have hoses running out of the engine, and what is that weird fin sticking out of the side of the tank? None of us had ever seen a white bike, and I had definitely never seen anything resembling a water-cooled engine. The bike was a UFO.

While the bike was trick, nobody would have cared if it wasn’t for Johnny’s style and immediate success. Right out of the gate, he dominated the 125cc Supercross race in Anaheim in late ’79. Then, at the1980 USGP at Mid-Ohio, Johnny—who was virtually unknown on the international scene—showed up and beat the world on the ME125. It was an incredible display of both rider and machine that will forever be cemented in the legacies of both Mugen and Omara. It was on that day that the nickname “The O’Show” was born.

At first, I was going to include Kent Howerton’s 1976 National Championship-winning Husqvarna 360, but after Tony sent me a picture of Kent’s 1980 RH 250, I jumped ship on the Husky. This factory Suzuki is a phenomenal-looking specimen and the last of the air-cooled, double-shock era. The bike was also one of the most dominant bikes of its time, decimating the field in the 1980 250cc AMA National Championship. I was a Suzuki kid in the early ‘80’s, and looking at this bike brings me right back there.

With Bob Hannah out with a broken leg for all the of the 1980 season, Kent went on to win all but one overall in the 1980 250cc AMA National Championship. On this bike, “The Rhinestone Cowboy” was undefeated outdoors, but he switched to the full floater prototype late in the season and lost one overall to Steve Wise. He also finished second in the 1980 SX Championship, winning three races, but his dominance in MX on this machine was incredible. In addition, Kent was honored as the 1980 AMA Pro Athlete of the Year.

Kent was Carmichael-esque and destroyed the 250 class outdoors in 1980. Some thought the Championship did not mean as much with Hannah sidelined, but with riders like Mike Bell, Marty Tripes, Steve Wise, Warren Reid, Jimmy Ellis and more on the line, it was still a stacked field. Moreover, Kent validated his 1980 Championship when he returned to beat Bob Hannah straight up in the 1981 Championship as well. At the end of the 1980 season, Kent was awarded this works bike as a trophy from American Suzuki.

The bike itself looks perfectly put together, but the most futuristic feature for 1980 was the carbon fiber chain guide. Today, carbon fiber is everywhere on race bikes, but to see carbon fiber on a dirt bike was relatively unheard of at that time. The bike also featured sand-casted magnesium throughout—including the engine, carburetor and front hub—and titanium nuts and fasteners everywhere. Kent’s knees were helped out with 43mm hand-crafted Kayaba front forks and specially made Ohlins shocks on the rear. One other really trick goodie was the handmade alloy rear brake pedal. This animal was almost completely handmade. I am not sure if there is a single part on this bike that could be used on a production 1980 RM250, making this bike the epitome of a works machine.