For this edition of Classic Steel, we are going to take a look back at the 1993 Suzuki RM250. 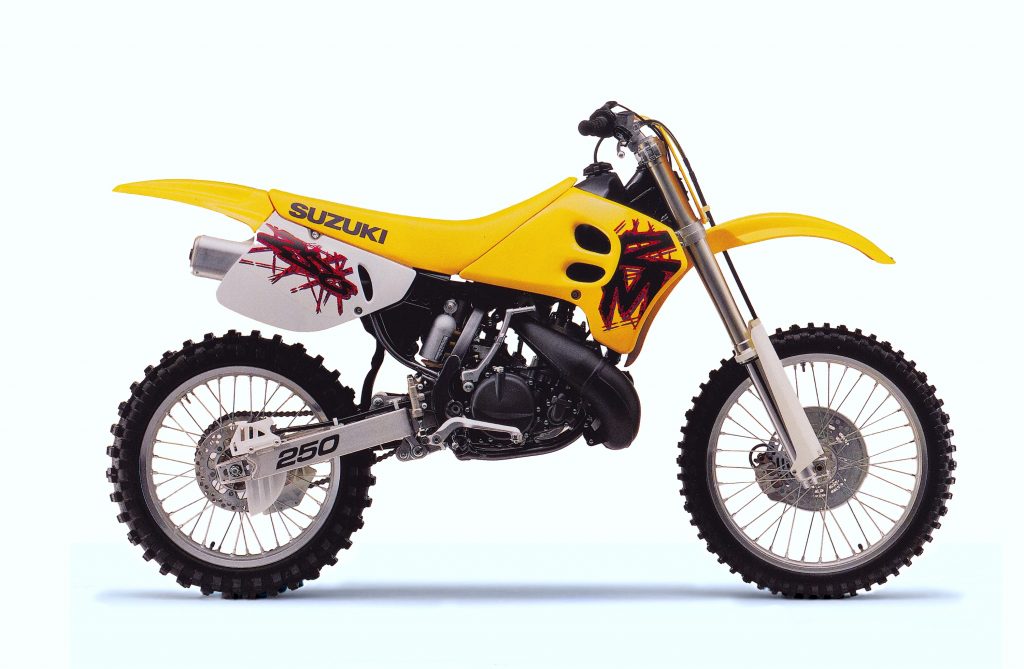 The ’93 RM was a major update for Suzuki’s venerable 250. New bodywork, a beefier chassis, and a reworked power plant highlighted the redesigned package. Although it looked greatly changed, the actual performance of the bike was not much different from the model it replaced. Photo Credit: Suzuki

The ’93 RM250 was Suzuki’s first major redesign of their deuce-and-a-half motocross machine since going to the case-reed design in 1989. The ’89-’92 RM250s had been competitive machines, but they had never been able to wrest the top spot away from perennial powerhouse Honda. Every year, Suzuki would tweak dozens of things, only to end back up with the same hard-to-ride package. For ’93, Suzuki launched an all-new RM line up intent on finally taking the top spot in the 250 class.

The new RM featured a majorly revised frame all-new bodywork and a retuned power plant. Complementing the package was a very clean and understated gunmetal and yellow color scheme. The ’93 RM certainly looked the part of a winner, with its new bodywork and handsome, modern appearance. The real question was, would all those changes deliver a truly changed motorcycle?

For ’93, Suzuki made a lot of modifications to their tried and true 250 mill, all aimed at broadening its hard-hitting, but narrow power delivery. Ever since Suzuki went to their case-reed motor design in ’89, their 250s had been “burst motors.” They were very quick-revving and potent, but lacking in torque and ease of use. The new RM featured a new cylinder and head, revised porting and a switch to a Keihin carburetor from the previous Mikuni. The result of all this reworking was a motor that ran exactly like the ’92 RM, with slightly less hit and marginally more torque. In ’93, the gold standard for motors was the CR250R. It pulled hard down low, exploded in the mid-range and revved out to the moon. It was the Motor of Doom of ‘93. Compared to the CR, the RM had less low end, comparable mid-range, and way less top-end pull. It was a mid-range only power plant. It was capable of running with the other 250s in the class, but the RM rider would be making twice the shifts of a rider on a red, white or green machine. The RM demanded total commitment and a go-for-broke approach to make the best use of its potent but limited power spread. 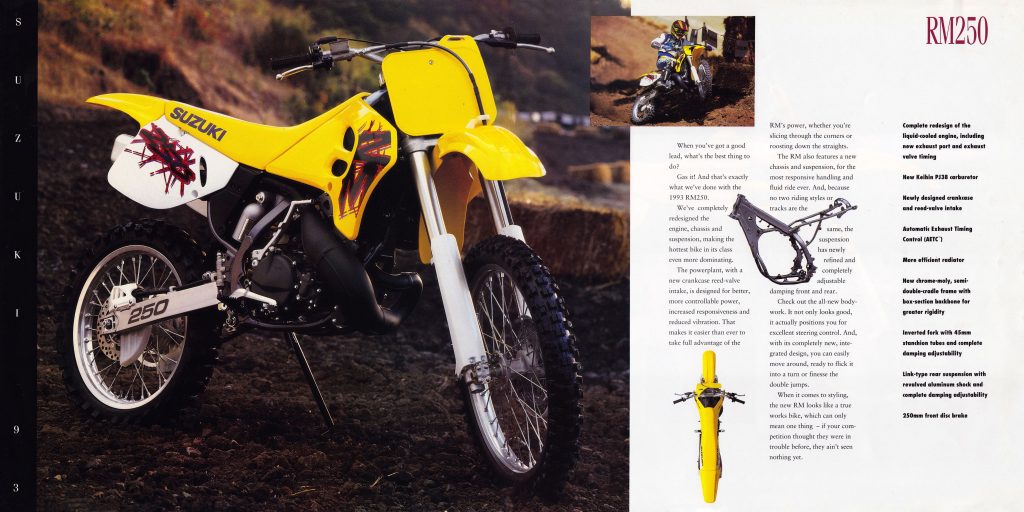 For my money, the stock 1993 RM look was a huge improvement over the pink, purple and yellow monstrosity Suzuki forced upon the buying public the year before. The stock graphics were a little odd, but the overall look of the bike was fresh, modern and undeniably attractive. Photo Credit: Suzuki

The ’93 RM’s suspension was a real case of Jekyll and Hyde. Up front, the Showa forks worked pretty well, but out back the Showa shock was a real jackhammer. In ’92, the RM had owned the worst forks on the track (no mean feat against the likes of Honda’s legendarily craptacular early 90s suspension). The ’93 versions were a big improvement, but not quite up to unseating the awesome KX250 as the suspension king of the class.  In stock condition, the RM’s Showas were under sprung for most riders and slightly underdamped. Thankfully, with a little setup, the forks could be made to work quite well. All that was required was a spring swap and some oil height adjustment to cure stock bike’s stinkbug stance and mid-stroke harshness.

The outlook was not nearly as bright in the shock department. The ’93 RM’s shock was in a word – atrocious. The shock was a real kidney-buster that liked to ricochet off square edge bumps and bounce around like Mexican jumping bean in braking bumps. The shock’s damping was not well mated to the rising rate of the rear end, or the geometry of the new chassis. You could fiddle endlessly with the clickers, but no amount of tuning could sort out the schizophrenic rear end. The only options were to get it re-valved or get used to being pummeled to death every ride.

Suzuki beefed up the frame on the ’93 RM in an effort to tame its notorious instability at speed. The frame tubes and backbone were changed from an oval shape to a rectangular design, resulting in a 35% increase in rigidity according to Suzuki.  In truth, much like the motor, Suzuki changed everything but really changed nothing. The new RM handled just like the old RM. That meant that the RM could cut an inside line as no other bike made, but it also meant that the RM danced around at speed like a 1976 Chrysler with four bald tires and a set of bad shocks.  The combination of the aggressive frame geometry and cranky rear suspension lent the RM a loose and busy feel at speed that was anything but confidence-inspiring.  It liked to shake its head and dance in the rough and generally scare the crap out of its pilot on fast straights. On a tight Supercross style circuit, the RM was magic, with its tight cornering and quick-hitting burst motor. On a fast, rough outdoor circuit, however, the stock RM was a thrill-a-minute terror machine.

One obvious change with the RM was its new bodywork. Suzuki made an interesting choice by actually making the new layout fatter than the ’92 model had been.  At the airbox, right where the rider squeezed the bike most often, Suzuki actually spaced out the side covers to provide a better grip. That, combined with the new slightly wider full coverage radiator shrouds, gave the bike a decidedly pudgy feel compared to most of the competition. Some people actually liked the new thicker bodywork as it did indeed give you something solid to cling to. Although you have to give Suzuki credit for bucking trends and trying something new, it was not a popular change and they went slimmer with the RM’s next redesign.

As far as appearance, the new bodywork was a huge success and was roundly praised by the moto media. The full coverage shrouds looked cool (and got even better with a sweet set of Tecnosel graphics like the ones on Greg’s Factory replica), and the new side panel design really freshened up the looks of the RM.  In addition to the new plastic, the yellow and gunmetal look was a major improvement over the ridiculous ’92 color treatment. The new bike may have run and handled like the same old RM, but at least it looked like a new machine.

The detailing on RMs of this era was always a bit suspect.  They were known for using an odd mish-mash of bolt and nut sizes throughout the bike. The bolts themselves were often of a lower quality than those found on the class leaders.  Everything from the seat foam to motor parts seemed to wear out faster than the competition. Another odd omission on the RM was its lack of a removable subframe. This was a full decade after Honda had added this huge convenience feature to their ’83 CR line. In its place was a single removable bar on the back of the frame that allowed much more limited access to the rear shock. Overall, the RM was a tick behind Honda and Yamaha, and probably on par with Kawasaki in quality and detailing in 1993.

The ’93 RM was certainly not a bad bike, but it was far from perfect. On the plus side, its hard-hitting and quick-revving power spread made the bike competitive and fun-to-ride. Also, its razor-sharp steering and airy feel made the bike the king of Supercross-style tracks. In the negative column, you had the RM’s extreme aversion to fast and rough circuits, gruesome rear suspension and questionable reliability. It was a bike that required more work than most of the competition but rewarded that commitment with an exhilarating and entertaining riding experience.

An Honest Look at the 250 Points