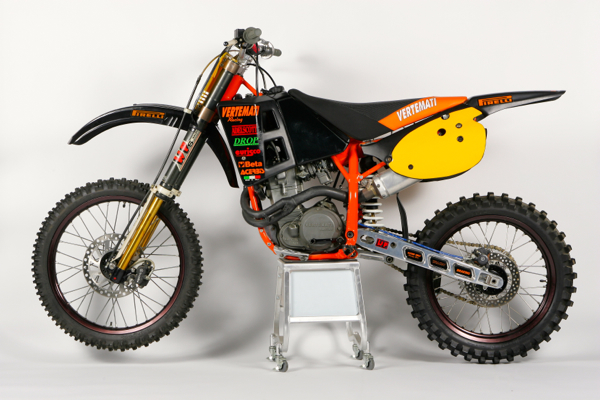 For this week’s Greg Primm’s Classic Steel we are going to take a look back at one of the most exotic of the nineties thumpers, Mike Young’s 1995 Vertemati GP500.

For this week’s Greg Primm’s Classic Steel we are going to take a look back at one of the most exotic of the nineties thumpers, Mike Young’s 1995 Vertemati GP500.

Long before they started building motorcycles, Alvaro and Guido Vertemati were true motorcycle enthusiasts. Growing up in racing crazed Italy, they had followed the GP’s from a young age and Alvaro had even competed in the Italian motocross championships for several years. In the mid-eighties the brothers acquired a Husqvarna franchise to sell the quirky Swedish machines in their native Italy. The Vertemati brothers enjoyed their Husky partnership for five years, and then in 1987 things changed, when Husqvarna’s motorcycle division was sold to Italian motorcycle powerhouse Cagiva. While the Vertemati bothers stayed with Husqu-giva for two more years, they never saw eye-to-eye with the new ownership and jumped at the chance to go Swedish again in 1989.

In the wake of the Husqvarna sale, there was a sizeable team of Swedish engineers left without a job. Taking the bull-by-the-horns, a team of former Husky engineers led by Thomas Gustavsson, decided to stay in Sweden and found their own motorcycle company. The result was Husaberg Motor AB in founded in 1988. The Husaberg operation was a small, almost grass roots affair. They lacked the massive funding and R&D budgets of the major motorcycle brands, but made up for it with bold choices and innovative ideas. They chose to focus their efforts on the fledgling four-stroke market, and started producing purpose built racing four-strokes in 1989.

The Vertemati brothers, not being happy with their current relationship with Cagiva, jumped at the chance to reacquaint themselves with their former Swedish partners. The partnership was a huge success and paid off immediately with the 1991 World Enduro title.  The Italians, bolstered by their early success, went even further and fielded a motocross team with Italian Walter Bartolini (brother of ’99 World MX champ Andrea) at the controls of their highly modified Husaberg. The Vertemati-Husaberg quickly gained a reputation for horsepower, as Bartolini pulled several holeshots in ’91 and ‘92. The Vertemati team, however, would take a huge step forward with the signing of little known Belgian rider Joel Smets in 1993. Smets (a future four times World Motocross Champion) would spend the ’93 season in the shadow of countryman Jacky Martens (who would capture the ’93 500 GP Title on a super-trick Husky 610), but would show good speed and a great deal of promise on the Husaberg 501.

1994 would prove a pivotal year for the Vertemati’s, as disagreements over sponsorship and money would end their alliance with Husaberg. Faced with once again starting over with a new manufacturer, the brothers decided to take the bold move of producing their own racing motorcycle. Unbelievably, the original Vertemati SAS GP500 was conceived, designed and built in only FOUR MONTHS!

Based loosely on the Husaberg’s they had been racing, the all-new bike was a hand-built rolling piece of art.  Even though Vertemati was basically using the ’94 Grand Prix’s to shake down the new design, with Smets at the controls, the bike proved quite effective. He set the fastest qualifying time at the first GP of the year and took home a double moto win at the second round in Austria. Smets would go onto win four motos in ’94, and finish the year in a solid third place overall. Following his breakout ’94 season, Smets found himself in a bidding war for his services and eventually signed with Vertemati’s rival Husaberg.  As a result, the Italian team went searching for a new rider to campaign the brand for 1995.

The man they found was journeyman AMA pro, Mike  “Young Gun” Young. Mike was one of the pioneers of the four-stroke movement, making a name for himself riding big booming thumpers from Husqvarna and Husaberg in the early nineties. Being known as an excellent four-stroke rider, the young American seemed like a perfect fit for the fledgling brand. Mike’s ’95 Vertemati GP500 was a slightly refined version of the machine Smets had campaigned the year before. The motor was still largely based on a Husaberg design. The top-end of the motor came straight off a Husaberg 501, while the bottom end was a new Vertemati creation. The bottom end was incredibly compact and featured a three-speed gearbox with neutral at the bottom below 1st gear. The tranny itself was acassette type that could be changed in 10 minutes without even removing the motor. The motor featured a unique forward kicking starter (shades of the old ATC 250R?) and slick hydraulic clutch. Displacement on Mike’s bike varied from 500cc to 560cc based on track conditions and could be altered by swapping out different cranks. All this was housed in beautifully crafted, sand-cast cases that just scream “works”.

The chassis on the GP500 was made up of chromoly steel tubing that was bolted together instead of being welded as on a traditional motorcycle. The Vertemati brothers believed the bolt-on chassis pieces allowed greater flexibility when making changes, easier replacement and reduced cost. The massive backbone of the chassis also served as the airbox for the motor (a trick “borrowed” from Husaberg), feeding its 40mm Dellorto carb. Perhaps the most striking part on the whole machine is its exquisitely crafted billet aluminum swingarm. This jewel-like piece of hardware was designed by Alvaro and manufactured by Vertemati family friends the Fumagalli brothers in Italy.

Topping off this rolling piece of Moto exotica were a set of full works WP forks and a works WP shock. These ungodly expensive components were only available to a few select GP teams and featured materials and tolerances well beyond the components found on production units. Brakes on the big V-machine were works Brembo’s front and rear, and Renthal handled components like the handlebar and sprockets. Virtually every bolt and guard on the Vertemati is lightweight titanium and many were actually hand-machined especially for this machine. Plastic was likewise all custom molded for the GP500 by Acerbis in Italy.

When you look at the Vertemati GP500 now it looks amazingly cobby. At first glance it looks to have been assembled Winners-Take-All-style in the back of somebody’s shed. When you dive a little deeper though, you see all the incredible attention to detail and innovation that went into the design. Nothing was superfluous and every component was scrutinized to achieve the lightest possible weight and highest performance (at 232lbs ready to race a Vertemati 4-stroke actually weighed less than a CR500R 2-stroke in ‘95). Incredibly, a bike that was designed and built in only four months was good enough to beat the world’s best on more than one occasion. Joel Smets and Mike Young both enjoyed success on the hand-built Italian machines and even stole a win or two from the powerhouse factory teams in the mid-nineties. That alone is a testament to just how good these bikes were.

Vertemati would actually sell a few production versions of the GP500 under the VOR name in the late nineties, but by that time the world had discovered the Yamaha YZ400F. The Yamaha’s impeccable fit and finish, as well as its reasonable cost, spelled doom for the more boutique four-stroke producers of the time. Bikes like the VOR, with their extraordinary cost and quirky personalities, just could not compete with the ride-it-and-forget-it nature of the big Yamaha. Even so, the Vertemati brothers continue to pioneer motorcycle design even today and have worked with brands such as Benelli to bring new ideas to the motorcycle community.  They are currently working on an all-new motocross machine and who knows, maybe someday soon we will see another Vertemati roosting around the hills of Italy.