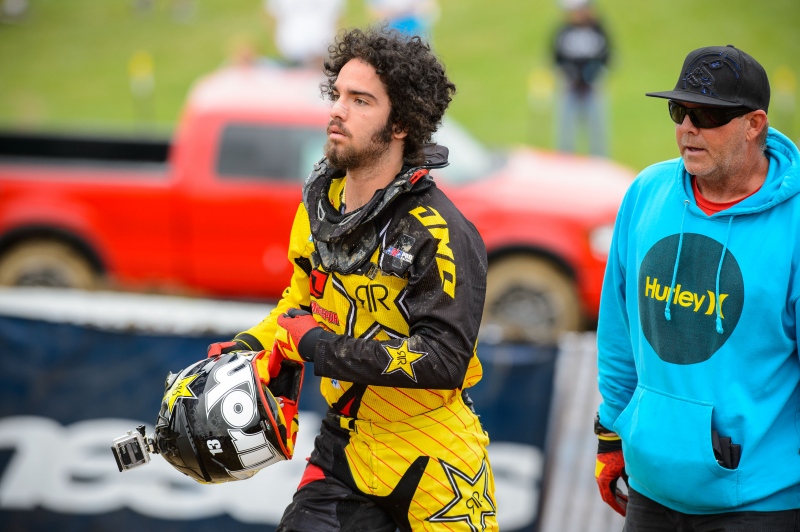 High Point left me in a low point.  Lets start with 29 seconds of silence……………….  Unfortunately this weeks Shortcoming is hitting really close to home literally on Short himself who suffered a mechanical DNF in the second moto.  These things are bound to happen you just always hope they don’t happen to you or those close to you.  Ironically I’m headed to Texas this week to hangout with Andrew Short an12pxd his family.  Irony is a cold-hearted bitch.  It would be hypocritical not to feature my favorite rider just because it brings tears to my eyes so I did indeed feature Short this week and sticking with the Texas theme I also picked Wharton who had an off weekend.

I like Wharton he’s a character he’s different so I find him odd yet interesting.  I don’t have a musical bone in my body so I appreciate anyone that can carry any type of tune.  I expected a little bit more from Wharton this year but what a rebound after his world came crashing down at Indy throwing a race win away with only a few corners to go.  If you’re going to throw away a race win like that there is no better way to rebound then to win at your hometown race in Houston.  In case you were curious how many search results might come up on the Google if you type in “Blake Wharton throws it away”, well I stopped counting after 11.  That’s a heart breaking experience to go through at least it wouldn’t have been his first win because that would have only made it worse.

What am I going to be able to tell you about Wharton that you don’t already know?  His brother Tyler was also fast and he wore skinny jeans way before they were “cool”.  Blake had a couple shoulder surgeries, that remind me of what Dean Wilson is going through right now.  Everyone knows that Blake plays music and he recently recorded a demo.  I didn’t plan ahead enough to get my hands on a demo and I couldn’t find it online but I did find some a music video with him signing.  Here are the link to the video I’m referencing.

To try and get to know Blake a little bit better, let’s listen to his lyrics and comment on them.

Blake singing: “This song is for America”

Moser comments: I already like where this is going, these colors don’t run.

“Beautiful one not as young as you used to be, many fine” (inaudible-I think he says “stores”) since the day you were conceived, you’re still my love, your still the one that I adore, your liberty, is what you have stood for”

I like where he’s going with this and it’s a song you would have a chance to get laid with, pretty mellow and he can carry a tune.  I was in “select” choir in middle school and think if he stood up it might improve his breathing technique.

“Appeal to heaven on behalf of me, appeal to heaven before the colony, join or die or let alllllll men be free, appeal to heaven is my heart felt beat (inaudible) to god and not a need to stand, somehow I feel that your slipping from my hand, you will stand tall to ring the cancer from within, I often wonder yes I do, how much more you will put up with.”

Alright so he’s throwing a little history in there, I see what he’s doing that’s cool.

“I’m Blake Wharton and I approve this message”

Nice political touch there at the end and although he’s sitting he does have great posture.

I guess I can also throw a short amount of real information into this article here is what the Rockstar energy drink MX race report had to say.

Things started to go awry as early as the second practice. Blake’s fast time in the second go around was not as good as the first, even though the track had improved. He struggled in the first moto but still made a vast improvement in moto 2. The upcoming break will be very good for Blake. He can spend the time, not resting, but working on the things he needs to improve and return to the consistency he has experienced in prior races. Every rider has a day here and there where things just don’t go according to plan”

Good on whoever is writing this press release to at least call out their rider for having a bad day and expecting more instead of sugar coating it and making excuses.  Are all the press releases like this with “real” information maybe I should start reading them more.  Well here is what Blake had to say-

“I don’t really have a lot to say after this race. I think the track really came around the last moto. I think it was as good as a track has been this year. It was gnarly. Pretty good considering it got a lot of rain. It usually dries up pretty quick though cause it’s on a hillside. I didn’t have a great weekend to say the least. I struggled a little bit with my starts but I was close. I just couldn’t get around that turn one or two spots better. It was like you just missed a good start because of those spots. I just rode average really. This next weekend is off then we’re heading into Budds Creek. Just gonna keep riding and trying to improve.”

Reading this makes me imagine what is must feel like if one of us “normal” people were to have a shitty day a work when nothing really went right and then 5:00pm rolls around you’re just spent, done, ready to go home, and then someone wants you to talk about it while recording the conversation.

Nothing roons your day like reading “Shorty out with a bike problem” sigh.  I know this is racing and bike problems are going to happen but that doesn’t make it hurt any less.  Shorty has had more than his fair share of bike issues over the years who could forget the TPS sensor on the KTM 350 in supercross?  Also that year on the 350 the back to back moto problems at Hangtown.  The practice crash on the prototype KTM450 that we don’t talk speak of.  Factory Honda motor at Southwick in practice one year.  Also on Factory Honda they couldn’t get the bike to start prior to the Texas national and he missed the 1stmoto.

I feel like I’m missing another mechanical DNF but I don’t like to dwell on the past or on the bad times, as my dad TwoHandsTom always says the glass is half full.  Team owner of the BTO Sports KTM team was on the PulpMX show Monday and said they didn’t know what the problem was yet but that it’s just one of those fluke things and that’s racing it’s going to happen.  Luckily Shorty wasn’t hurt and there is always next week.

Although the wound was still fresh I sucked it up bit my lip and text Shorty’s mechanic to try and get some info on the cause of the bike problem in the second moto.  These are the lengths I’ll go to for you the thousands of Shortcoming readers.  My relationship with Nate is best described as complicated.  Nate is pretty quite, where as I’m kind of outgoing some might say loud or annoying or that I get in the way and ask to many questions when someone is trying to do their job and work on a motorcycle, some people may describe me like that.  Someone had a very good interview with Nate about what exactly he does every week it’s a really good read with some interesting insight into the life of a mechanic check it out here (scroll down a bit he’s the 2nd interview) (seriously it’s a good interview check it out) http://pulpmx.com/stories/btosports-ktm-team-profile-1

I like Nate he’s funny and a genuinely nice guy check out this video that Kyle Cowling did with him that talks about where he came from and how he’s gotten to this point in his career.  “A Mechanics Journey” http://www.vitalmx.com/videos/features/Nathan-Alexander-A-Mechanics-Journey,8453/elmo,16138

Nate is a self made man and he’s worked hard to become a factory mechanic even living in a tent at one point.  All those guys asking how to get a job in the industry need to look no further than the blood sweat and tears Nate has put in for little to no money long before he made it to where he is today.

Moser:  Are you ready to talk about this?  I have to write about Shorty for this weeks Shortcomings, so what broke in the 2ndmoto and subsequently caused me to drink to excess?

I don’t know.  I’ve told you a thousand times I’m a parts changer.  I build the chassis, clean parts, change clutches and fill up the gas.  If the motor falls out of the frame that’s my fault.

I’m not blaming you, maybe we shouldn’t do this.  I thought someone said it was an electrical issue.

It could have been, but I don’t know I’m not an electrician.  I don’t have a crystal ball in my toolbox.

You do have shallow T handles in your toolbox though.

Yes but only at home.

So when something like this happens do you basically send everything back to KTM?

Are there any aftermarket parts the BTO Team runs that the KTM factory team doesn’t besides FMF, tires, and handlebars?

Is this your first DNF as a mechanic?

I answered all my questions

I can never tell if you love me or hate me?

Are we hanging out this week at the Short family farm?

Well if my relationship with Nate wasn’t already complicated enough it just got worse.  This couldn’t come at a worse time because I’m headed to Shorty’s house this week to hang out with Nate.  Give him a follow on twitter @nasty_nine he post a bit of everything, rap quotes, behind the scenes moto info, selfie photos, and best of all Shorty related photos.

Thanks for reading, I might not see you next week I may never leave Texas.