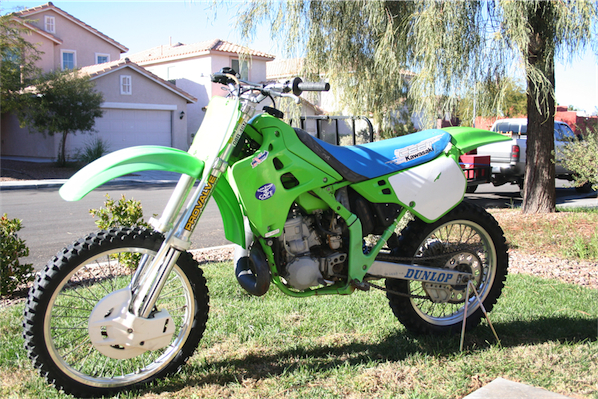 Welcome to my new make-work project

Welcome to my new make-work project

I have no idea why but for a long time now I’ve wanted to restore a bike. Anyone who reads or listens to my stuff knows that I love the olden days of moto. Just the nostalgia of the 80’s and early 90’s are hard to duplicate, the time in the sport where things were way different than before. I know, I know- it’s the old “I had to walk uphill to school both ways” thing (and truthfully I do wonder if some people will, years from now, look back at the Villopoto-era as the grand old days of motocross. That would be pretty funny but I bet people do) but in a way I’ve always thought it would be cool to have a new older bike to, well, do I don’t know what with.

And honestly, I’ve been thinking more and more about trying to work less. With yet another full year of sx/mx staring me in the face, I’ve tried to step back a bit and do something-anything- other than typing on a computer or talking into a microphone. So this restore would be a nice little break from the couch/chair and give me a bit of a, what do they call it, a hobby.

My first search was for a ’87, ’88 Honda but most of them that I found were beat down pretty good. I wanted to restore a bike, not re-make a bike. But one different bike was on my list of machines- a 1990 KX 250. For whatever reason these bikes always caught my eye, I never owned one (I rode Kawi’s in ’88 and ’89 but switched to Honda for ’90-’92) but they were certainly pretty sweet for their time. The first bike to have a perimeter frame and when it came out, in my opinion anyways, it was the best looking bike by far. I didn’t want a ’91 because that was already the second year and I didn’t want a 1989. Nope, it had to be a 1990 KX 125 or 250 or nothing else from the green guys was to be considered. For the record I also had a ’88 YZ250 on my list because of it being the first year of a radical new look for Yamaha. And as far as Honda, my desire for one covered a number of years and models.

Your list is probably different than mine and that’s the beauty of these things- different years and bikes mean different things to different people. There’s no explaining it.

So when I found a couple of pretty good looking 90 KX250’s within days of each other in Southern California I figured this was my sign from above. Every couple of weeks I would check Craigslist here in Vegas or in SoCal and just couldn’t find what I wanted. Some were too much money and already restored and most were basket cases that I wouldn’t even know where to start.

So the deal was made- $700.00 bucks and what I got myself into, I have no idea. Looks like the tools need to be dusted off and my fingernails greasy once again.

Thanks to Babbitt’s for the deal on the OEM parts, may I recommend them for your business the next time you need some OEM parts?

Maybe I’ll ride it, maybe leave it in the garage- we’ll see. But for now here’s the start of the restore. Keep checking back and I’ll fill you in as I get deeper and deeper into #project90