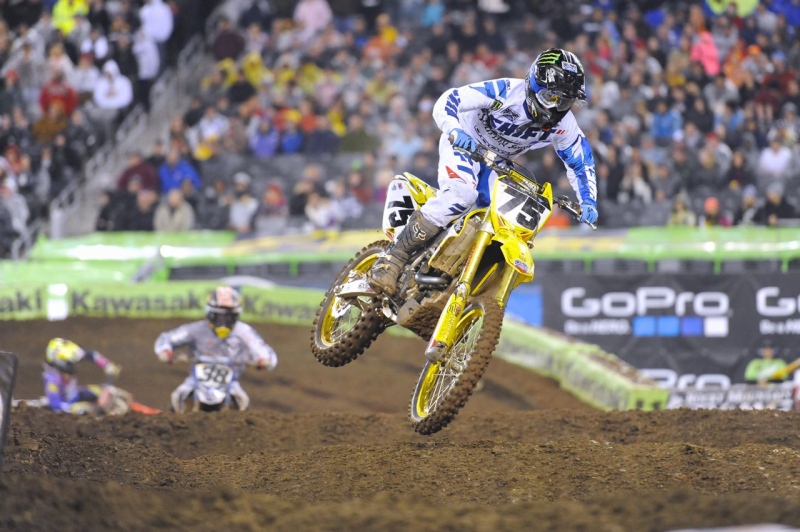 Matthes: Hey JT, I feel a bit for the RCH guys as they got a lot of flack on Twitter and Pulpmx Show’s for not giving guys like Weston Peick a chance on their team. Instead they went with Josh Hill for three years and due to injuries, Hill didn’t contribute a whole lot other than a heat race win last year and some decent finishes here and there. Well, a couple of weeks ago the team announced that it’s dropping Hill for the nationals and giving Peick a chance for this summers nationals. And then what happens? Hill goes out there and rides his best race in years and gets a third place. Which angered Denny Stephenson and many others that Hill was not going to be let go from the team. By all accounts it’s not all Hill’s riding that got him turfed for the nationals, it was a some off the track stuff and team problems that made them go with Peick. What do you think?

JT: I don’t think they made a bad move, per se. I think that head to head in an outdoor setting, Weston Peick is a better rider than Josh Hill right now. The result sheet further bolsters that notion and I think this summer will also be its own proof. There has been much public pressure for RCH to hire Peick during the season and they have acted on that. The interesting thing here to me is that not only are they making said move, they are also bringing in Ivan Tedesco for the outdoors. I have heard that Tedesco is replacing the injured Broc Tickle but it still seems odd to me. Ivan didn’t really light the world on fire in his 2014 supercross stint and Hill is arguably faster than IT9.

The more logical move on paper would be to add Peick and move HIll over to the replacement role until Tickle is ready. The fact that they went a different direction leads me to think there is a bit more to the story, as you alluded to. Many have pointed to both Kenny Watson and Ricky Carmichael’s strong friendship with Tedesco as a reason while others point to Tedesco’s reputation as a particularly good test rider. Whatever the case, it surely wasn’t popular with a few fans and industry members alike. The good news is that I have heard rumblings of Hill getting a solid deal to race in Canada so he will land on his feet, regardless. Ah, the drama of supercross contracts!

Matthes: If I put myself into Carey Hart’s shoes, I’m not sure that I would’ve kept bringing Hill back year after year when it looked like he was done. So props to him for doing that and it’s a rare thing in this dog-eat-dog industry. Obviously we don’t know what the deal is with Hill being let go but there’s more to it than lack of results, there was some talk of Josh not gelling with the team over the bike and some missed flights-things like that. Even still, if you put yourself in the shoes of a team owner, what kind of stuff off the track, not on the track, would you consider no-no’s and pass on a guy or like in this situation, let a guy go early?

JT: I absolutely agree that Carey should be commended for standing behind Hill for so many years when Hill was not producing much in the way of on track results. Hill was paid quite well during those years of injury and you are very correct in that most would have never followed through on a contract in that same situation. That says a lot for Carey as a person and businessman.

As for the off track issues, I haven’t heard too much in that regard. The biggest reason I am guessing is maybe he didn’t see eye to eye with the new management that RCH has undergone recently. Keep in mind that they have not only added Ricky Carmichael to the picture but also Mark Johnson and a silent partner as well. With changes at the top, that almost always means changes throughout the hierarchy, including riders. I think Josh Hill may just not be on someone’s wish list of riders and that decision won out.

Matthes: The bottom line is in our sport we never really know what the contracts say or what the deal is behind the scenes. We can speculate and all that but I do know that every contract basically states that either side can end the contract if they want. So hence, Hill became a victim of Weston Pieck riding so well and the team needing the results. Maybe Sycuan Casino put the heat on and was wondering what was going on as Tickle hadn’t been replaced? Maybe Mark Johnson and Ricky Carmichael soured on Josh because of something Hill said that got back to them? Who knows but one thing for sure this sport is wildly unpredictable and I’m not sure that’s a good thing.