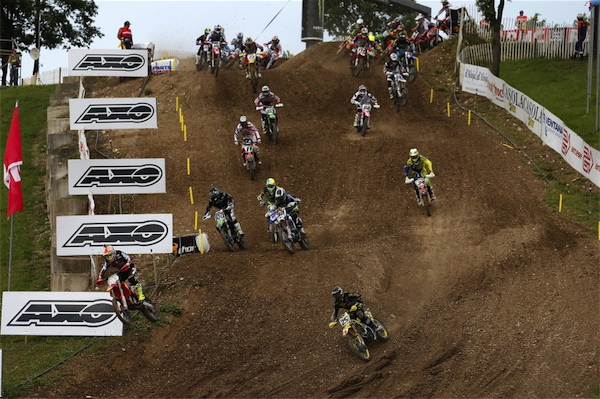 It was Déjà Vu for Antonio Cairoli in both motos in France.  The Italian crashed with only a couple of laps to go in each race, just to hand both wins over to title rival, Clement Desalle.  Cairoli caught Desalle again in race one, but just couldn’t make the pass on the last lap.  He also failed to pass Jeremy Van Horebeek for second place at the finish in race two, so it means Cairoli lost eight points in the championship and his lead is now down to 20 points!

It must be remembered that Cairoli has had a lot to deal with over the past two weeks (losing his father and still racing two GPs on the bounce), and his unlikely lapses in concentration are no doubt a consequence.  It hasn’t been an easy time for Cairoli, his girlfriend Jill, or his close family and friends, but Tony’s professionalism and will to win throughout everything are to be greatly admired.  Antonio will be glad to get the weekend off to digest all that happened over the previous two weeks.

Clemet Desalle, however, deserves huge credit.  The Belgian has hit his best form in a couple of years to claw back the points gap.  With his constant pressure on Cairoli during both motos in France, Cairoli was forced to keep pushing right to the end in both races.  Desalle has the momentum behind him now, and this is looking like his best chance to really challenge for the title in few seasons.

Jeremy Van Horebeek was on the podium again.  Van Horebeek has been on the podium more than any other rider in the class, but is still awaiting his first win.  Jeremy had a bad start in race one, but went with leaders Desalle and Cairoli in race two (as did Steven Frossard) in what was a four-way freight train at the front.  Van Horebeek held off Cairoli in a frantic last lap in moto two that saw the Belgian claim a second place finish on the podium.  He is now 33 points off the Italian in the championship, and is the only other realistic championship contender after all the injuries.

Steven Frossard isn’t a contender for the title anymore after a series of DNFs and crashes at the beginning of the season, but he is showing he is a threat for race wins.  Frossard hung with Cairoli in Britain last week and ran with the top three in moto two in France.  A moto win might not be far away for the Frenchman.  Frossard is getting closer and closer to being the rider who challenged Cairoli for the title until injury got in his way back in 2011.

In MX2, it was the Jeffrey Herlings show again, but just like at the British GP, Arnaud Tonus pushed Herlings for the first twenty minutes of the second moto.  Tonus is learning every time he gets away with the Dutchman, but Herlings always seems to have that little bit extra when he needs it.  The slick French track used to be Herlings’ Achilles heel in his first couple of years in GP racing, but the World champion has improved significantly on hard, slick tracks, and appears to have zero weaknesses when it comes to track surfaces now.  Whatever the track, the Dutchman can adapt to it!

It was a good day for Jordi Tixier.  While the Frenchman still does not quite have the raw speed he showed at times last season, he did make the podium in front of his home fans and is closing in on third place in the point standings.  Tixier still struggles under pressure, so to make the podium at his home race will hopefully help him learn to cope with the nerves of big occasions.  Something he will need to conquer if he is picked for MXDN in Latvia.

Thomas Covington finally got two starts where he was in the top ten, and held strong on what was a very tricky and technical track to post eleventh overall.  Remember, this was the track Blake Baggett crashed on numerous times and got lapped at the Nations two years ago.  It isn’t an easy track to adapt to, so the teenage American did pretty well considering.

In early 2015 news, Tim Gajser signed a two-year deal to stay with HRC Honda.  Tim told me last week his deal was 90% done and after his podium, HRC were quick to seal the deal with the hottest prospect in GP racing. Gasjer and Honda could challenge KTM’s supremacy in the next couple of years.  In other Honda news, it is rumoured they are ready to offer Herlings a huge pay-day to race their 450 in MXGP next season.  KTM is apparently trying to convince Herlings to stay in MX2, so they can continue to win both titles.  But Honda’s offer might tempt Herlings to move up or at least force KTM’s hand in allowing him to move up so he can stay orange! Either way, the young Dutchman won’t be having money problems in the next couple of seasons!

Honda isn’t just trying to sign Herlings next season, they are trying to dispose KTM as the leading GP team.  It would represent a seismic shift for them to have both the hottest young talents of Herlings and Gasjer in both classes.  HRC is also interested in Gautier Paulin and Arnaud Tonus for an MXGP ride next year.  The Japanese factory is beginning to flex their muscles in GP racing, and KTM will definitely be looking over their shoulder. Don’t rule out some audacious bids for some of the top US starts either in the future.