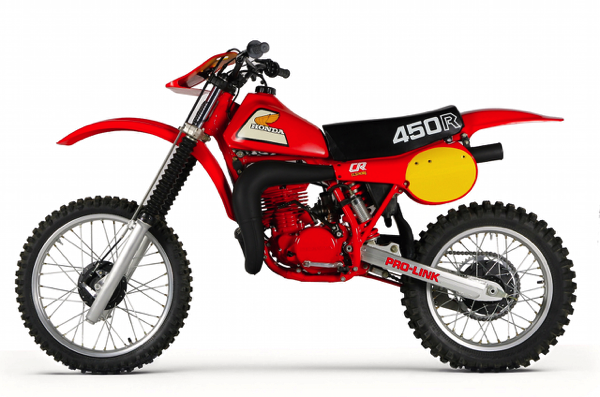 For this week’s GP’s Classic Steel we are going to take a look back at Honda’s first Open class motocross machine, the 1981 CR450R Elsinore.

For this week’s GP’s Classic Steel we are going to take a look back at Honda’s first Open class motocross machine, the 1981 CR450R Elsinore.

Perhaps no machine in history has been as hotly anticipated as the 1981 Honda CR450R Elsinore. Throughout the seventies, Honda raced Factory bikes in the Open class, but held off on actually producing a 500 class machine. Riders like Pierre Karsmakers, Jim Pomeroy, Marty Smith and Brad Lackey took the fire-breathing Factory Honda Open bikes to victory, while Joe Motocross was left to sit on the sidelines with dreams of a big bore Honda.

In the later part of the decade, desperate Honda devotees took to punching out their CR250R’s in an effort to build a 500 class Honda of their own. Using 360cc kits from Mugen (imported by AL Baker of XR’s Only fame), the Elsinore could be made into a competitive Open class racer. The 360 kit punched up the ponies, but did nothing for the stock CR250R’s high-strung nature. Much more akin to a ultra-powerful 125 than a trench digging 500, the Mugen 360 was fast, but demanding.  For Open class racers looking to ride red, the Mugen kit was a viable alternative, but it was no substitute for a factory built machine.

By 1980, desire for a factory built Honda 500 was reaching a fevered pitch. Team Honda was coming off back-to-back 500 World Motocross Championships (and an AMA 500 National Title) and riders both here and across the pond were anxious to get their hands on a genuine RC500 replica. Early spy photo’s showed a bike that looked remarkably like the Factory machines and only served to feed the flames of consumer desire. The new CR’s looked to be the trickest Hondas ever offered, with tons of new technology stolen right off the works machines of Malberbe, DeCoster and Sun.

For 1981, Honda would be scrapping their complete lineup (with the exception of the new for ’80 CR80R) and coming out with all new full size machines. Best of all, for the first time, an Open class Elsinore would be joining the CR125R and CR250R.  The new CR450R Elsinore would adopt the Pro-Link single-shock system used by the Factory team in 1980 and mate it to a set of massive (for the time) 41mm Kayaba forks. The motor would retain a traditional air-cooled configuration (both the CR125R and CR250R picked up water-cooling in ’81) and mate it to a new four-speed trans. New bodywork and a fresh coat of fire engine red paint were spec’d to finish off the trick new CR.

Once the bikes were released, there could be no doubt the new Elsie’s looked the part. Spacy styling highlighted a package that sweat trickness from stem to stern. Little details like a side-pull throttle, dual-leading shoe brakes and quality switchgear throughout pointed at Honda’s apparent attention to detail. Once you dug a little deeper, however, there were problems.

First, and probably most concerning, was the new Honda’s motor, which was completely out of step with the Open class fashions of the time. In 1981, torque was the name of the game and big bore brutes like the Maico 490 and Yamaha YZ465 ruled the roost. They offered blistering performance, but mated it to a chugging and chunky style of power.  They were like big powerful turbo diesels, friendly on the surface, with gobs of tire shredding torque in reserve.

When designing their new mill, Honda had taken the opposite approach.  Instead of going for a big displacement tractor, they preferred to bore and stroke their exiting 250 design. This yielded a relatively short stroke (85mm x 76mm) and a rather smallish 431cc’s of displacement. This was significantly less than the 465cc’s of the Yamaha and 488cc’s of the ground-pounding Maico.

On the track, the 431cc mill punched out an abrupt and very quick-revving style of ponies. Power was extremely explosive, with a sudden delivery and quick turnover. Low end was poor , before hitting like a ton of bricks in the midrange, as all 38 pound-feet of torque pored out in one massive blast.  Then, just as fast as it had started, the party was over and the big Elsie demanded another shift. Thrust was non-existent above the midrange and revving it out only made it go slower.

With its frenzied delivery and short powerband, gear selection became critical and here the CR once again went astray. On the best Open bikes of the day, a rider could place his beast in third and rarely shift, as he rode the bikes tremendous torque curve. On the CR, that was just not possible, as its peaky powerband and quick-revving motor demanded constant shifts to keep it in its narrow sweet spot.  Power delivery on the big Honda was much closer to a breathed on 250 than a monster 500, and timing these shifts was imperative to making the most of its limited power spread.

Unfortunately, nailing these shifts was no easy matter on the 450R. When building the new bike, Honda decided to fit the bike with only four gears. While this in and of itself was not an issue, the bike’s poorly spaced gears were. On the Elsinore, first was incredibly tall and fourth was too short. This meant just getting the CR going from a standstill required a good deal of clutch slippage (something its pathetic 250 sourced clutch was not up to) and if you were not careful, the Elsie would cough and stall.

Once you managed to get it in motion, then the CR’s razor thin powerband and widely spaced gears left riders in a bit of a quandary. If you revved it out to pull the next gear, then the Honda fell flat on its face, if you tried to short shift it to keep it on the torque curve, then the 450 would bog. Even worse, if you geared it down to tighten up the spaces, then you were left constantly grabbing for a fifth gear that was not there. It was a classic case of lose-lose, with no easy way to rectify its mismatched powertrain.

While the 450R’s power was certainly a major concern, it was far from the last of the big Elsinore’s maladies. First and foremost was probably the Honda’s bloated weight, which tipped the scales at a waistband-busting 253 pounds. This was a staggering 29 pounds more than the class-leading Maico MC490 Mega Two and actually heavier than Yamaha’s original (and notoriously porky) YZ400F four-stroke!

This eye-opening weight figure impacted every facet of the bike’s performance and handicapped it before it even set foot on the track. At 42.8 hp, the 450R started out with 5 less horsepower than the mighty Maico and that gap widened even more when you added in the excess suet it was lugging around. On the track, the bike felt every bit of its 250 pounds and smashed into obstacles lighter bikes floated over. In the turns, it was fairly accurate, but at speed it was a runaway tractor-trailer with bald tires and a bad steering rack. Headshake was of the soil-your-pants variety and the CR could literally wrench your hands from the bars at any time without warning.

In the suspension department, the CR’s components were no match for its absurd power delivery and portly disposition.  Up front, a set of 41mm Kayaba forks offered 12 inches of travel and no external damping adjustment. As delivered, they were badly undersprung and underdamped, with virtually no control in either direction. Under deceleration they dove excessively and any moderate sized bump sent them crashing to the stops. Rebound was nearly non-existent and the forks were like giant pogo sticks in the rough.

Out back, the outlook was slightly better, with a huge dose of new technology. New for ’81, was Honda’s works inspired Pro-Link single shock suspension system. The Pro-Link was Honda’s first attempt at a single shock linkage system and it incorporated much of what we still see in use today. There was a beefy alloy swingarm, mated to a bell crank linkage and bolted to the bottom of a single Showa damper.  The purpose of this linkage was to vary shock piston speed as the rear wheel moved through its travel and provide better bottoming control, while maintaining a smooth ride at low speeds. On the Honda, this linkage was mounted low and below the shock, offering a much lower center of gravity than the Suzuki and Kawasaki single shock systems.

On the track, the new Pro-Link had the basic idea right, but the execution all wrong. At low speeds, the damping was too light and it liked to blow through the stroke. In the mid-stroke, the shock hit a virtual wall of damping and refused to move in the last six inches of the travel. It was both too soft and too hard at the same time and virtually worthless as a racing instrument.

Making matters even worse was the CR reliability, or more accurately, lack thereof. Tops on the hit list, was the Honda’s clutch, which was stolen directly off the CR250R. This unit had proven woefully inadequate on the 250, so it did not take a lot of imagination to predict how it was going to handle an over-geared 500. Any amount of clutch abuse (a necessary evil on the Elsie) was enough to smoke this pathetic unit and turn it into a lurching and dragging mess. If the clutch stayed in one piece, then it was only a matter of time until the base gasket blew. If that defied the odds, then the frame and swingarm were sure to crack. Shock hoses blew, air filters leaked and plugs fouled.  Overnight, the bike that people had dreamed of for nearly a decade, turned into a nightmare of epic proportions.

On the bright side, not everything was a complete failure. The bike looked great, aside from its very unfortunate front number plate. The front plate was designed to route more air to the motor, but most people found it to be an eye sore. Other than that, the plastic was of high quality and the styling was clean and highly modern. The brakes were dual-leading shoe and the strongest binders on the market. All the components were top notch and a cut above those found on the competition. Items like the forged levers (bent instead of breaking), quality grips (no need for Ourys) and slick folding shift lever showed Honda’s attention to detail in an otherwise lackluster design.

Overall, the new CR450R proved to be a massive disappointment for Honda. While they sold thousands of them on anticipation alone, the actual product turned out to be a colossal dud. It was an ill-handling, unruly, unreliable and overweight beast that disappointed everyone who shelled out their hard earned $2148 to buy it.  Quickly, Roger DeCoster and the Honda engineers realized they had made some unfortunate choices with the 450 and set about making amends with a hugely improved Open class Honda.  The 1982 CR480R rectified most of the 450’s deficiencies and turned a sow’s ear into a silk purse overnight. The 480 was everything the reviled 450 was not and sowed the seeds for a decade of Honda dominance.