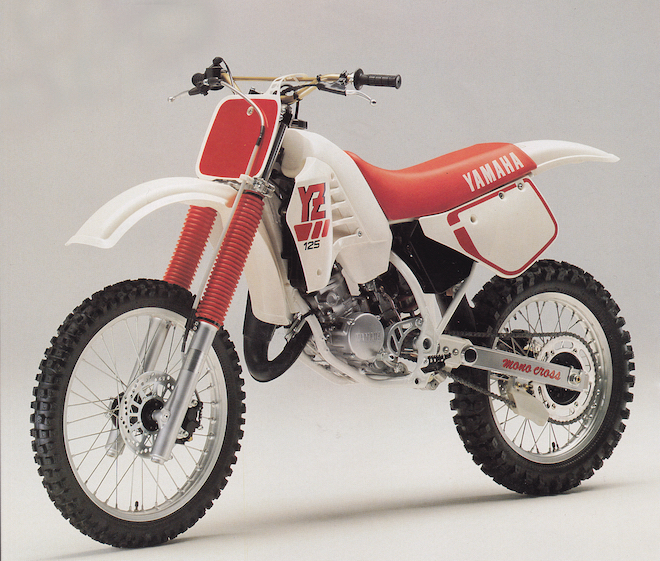 In its third year of production, refinement was the name of the game for Yamaha’s 125 in 1988. A new cartridge fork, silver accents and some minor motor mods highlighted a largely unchanged package. Photo Credit: Yamaha

The 1980s were an up and down decade for Yamaha’s 125 motocross program. At the start of the decade, the YZ was on top with the best bike in the class. It was fast, light and generally did the best job of going fast around the racetrack. In 1981, however, the balance of power shifted back to Suzuki with the arrival of their groundbreaking Full-Floater suspension system. The ‘81 RM125 laid waste to the competition and made the old-school monoshock YZ look like yesterday’s news. In 1982, The YZ fought back with an all-new Power Valve motor that roosted on the competition, but its cranky rear suspension and oddball handling kept it from overtaking the RM at the top of the standings.

For 1983, Yamaha finally moved the radiator from the handlebar to the front of the tank, trimmed the weight and dialed up a decent rear suspension design. The improved handling and suspension were welcome upgrades, but once again the YZ was forced to play second fiddle; this time to the upstart CR125R.

In 1984, things started trending in the wrong direction for the YZ125. An all-new bike turned out to be the dog of the class and the YZ slid from second to a distant last in the 125 standings. The 1985 season brought with it a new look, but the same old bow-wow of a motor. The ’85 YZ was slow, poorly suspended and a complete embarrassment on the track. Hopping it up only made it less reliable, while doing nothing for its meager output.

After two years of utter futility in the 125 class, it was time for a fresh start in 1986. An all-new YZ125 moved to case-reed induction and introduced a slim layout that rivaled the Honda for fit and feel. The new bike was worlds faster than the ’85, but harder to ride than the omnipotent CR. Its midrange motor was fast, but the overall spread was narrow and the notchy gearbox made keeping it in the sweet spot difficult. Overall, it was the most improved bike of ’86, but not quite up to capturing the title of top 125 in the land.

For 1987, Yamaha ditched the red radiator shrouds and worked on refining the solid ’86 package. The new bike offered a beefy low-end punch and some of the worst forks ever seen on a motocross machine.  The new Travel Control Valve (TCV) Kayaba forks were incredibly harsh and virtually unridable in stock condition.  They held back an otherwise solid package and made the YZ cannon fodder for the redesigned Honda CR125R.

With yet another disappointing season in the rearview mirror, Yamaha set about bringing their second-banana up to snuff for 1988. First up on the agenda was an upgrade in suspension. The unloved TCV forks were retired and replaced with Kayaba’s new 43mm cartridge sliders. These new units offered far finer damping control and a quantum leap in performance. Complementing the new forks were a new BASS-less shock, revamped motor, new bars, better brakes, revised graphics and a new coat of silver paint for everything.

In the motor department, there were two major issues that needed addressing for ‘88 – top-end power and shifting. Since 1986, the YZ125 had been plenty fast, but the power was long on punch and short on breadth. It came on strong down low (extremely early for a 125) and hit very hard in the midrange, but threw out the anchor if revved. In an effort to coax a little more rev out of their 123cc case-reed mill Yamaha redesigned the cases to accommodate a larger reed-valve, redesigned the valve to mimic an FMF unit, streamlined the YPVS for less restriction and changed the ignition.  A new pipe, new porting and a rebalanced flywheel further tried to free up the Y-Zed’s reluctance to sing the high note.

In the shifting department, Yamaha took a two-pronged attack to rectify its notoriously poor action. First, they upgraded the clutch with an additional fiber plate, one more spring and a switch to needle bearings for the actuator. In the transmission, they increased the main shaft diameter by two millimeters and beefed up the gears for more durability.

Unfortunately, all of these motor upgrades did little to actually change the performance of the YZ. It remained the same hard-hitting low-to-mid motor it had been the previous two years. Low-end was particularly remarkable for a 125 and the little Yammer positively barked out of turns. It had the most low end and midrange in the class, but once again fell short when revved. If you nailed each shift perfectly and caught the next gear before the power flattened out it was brutally effective, but if you tried to stretch out that gear a second too far, the motor stopped pulling like you sucked a chipmunk into the airbox.

It was the ultimate burst motor and riders either loved or hated its punchy delivery. For those accustomed to a traditional 125, the YZ could be frustrating. Unlike the CR125R, which just kept pulling the longer you left it on, the YZ demanded a perfectly timed shift to keep it on the bubble. With its unorthodox powerband, the YZ actually took a more Open-bike style approach; keep it a gear tall, ride the torque curve, and slip in another cog before the motor stopped pulling. Of course, this could be frustrating as well, because the YZ’s transmission continued to be the worst in the class by a wide margin.

The new transmission proved no more adept at changing gears than the old gearbox was. The new clutch worked well enough, but the gearbox itself refused to change gears under a load. Under power, it was virtually impossible to upshift or downshift without backing out of the throttle and feeding in some clutch. With each shift being so critical to making its narrow powerband work, keeping the YZ at full boil could be an exasperating experience. Nail each shift and keep her singing and the YZ could fly, muff one of those shifts though, and you would be left stomping on the gear shift and fanning the clutch as the competition roosted by.

In the suspension department, the changes were much more successful. The new 43mm cartridge Kayaba forks worked roughly 900% better than the torture devices used on the ’87 YZ. They were plush on small hits and worked reasonably well on big impacts. There was none of the harshness that pounded the rider’s wrists in 1987 and much better control in the rough.  Faster and heavier guys could bottom them out on mega leaps, but overall they were a vast improvement and on par with the competition.

In the rear, Yamaha finally ditched their creative, but unloved Brake Actuated Suspension System for 1988. The BASS was supposed to improve tracking under braking, but most riders found the YZs actually worked better with the system disconnected. The new piggyback Kayaba shock also revised the compression adjustment by switching to a bleed-type adjuster from the pop-off valve of ’87. Both the swingarm and Monocross linkage remained largely unchanged for 1988.

On the track, the new shock performed more or less the same as 1987. It was good at charging obstacles, but busy in off-throttle situations. If ridden aggressively, it did a good job of absorbing the track, but once you backed off, it got busy and unpredictable.  On square-edged whoops or braking bumps, it was prone to kicking suddenly and never quite settled down. No amount of spinning dials ever got rid of this unsettling behavior and most riders found keeping their weight back and holding on for dear life was the best remedy.

In terms of handling, the YZ was a bit of a mixed bag. The inherent stability of the chassis was quite good, but the hop-o-matic shock could often make that a moot point. Once the shock was dialed, the YZ was as steady at speed as a bullet train. In the corners, the abrupt nature of the power and the YZ’s light front end made it difficult to always hit your intended line. Wheelies were common and the bike never felt as sure and planted as the scalpel-sharp Honda. With its slim layout and smooth bodywork, the YZ was easy to move around on and an able flier. Like most 125s, it felt very light in the air and on the ground and its handling shortcomings were not nearly as much of a handicap as they would have been on a heavier and more-powerful machine.

In the braking department, the YZ made major strides in 1988 by finally stepping up to a disc in the rear. Although extremely cobby looking, the new 220mm disc offered a lot of power. Its main weakness was its grabby feel, which took a lot of getting used to. Those accustomed to the previous drum or Honda’s excellent rear stopper were likely to find themselves stalling the YZ several times before becoming familiar with the YZ’s light-switch engagement. Up front, the disc size was increased 10mm for 1988 to a total of 230mm. This gave the bike more bite, but again, not as much feel as the well-modulated dual-piston units found on the CR. Overall, they got the job done, but lacked the feel of the best binders in the class.

In the detailing department, the YZ was pretty typical for the time. Things like the butter-soft steel bars, rock-hard grips, brittle levers and cheesy fasteners were all par-for-the-course in the mid-eighties. The lack of a removable subframe (the YZ made due with a removable bar on one side) was less forgivable, with Honda, KTM and Kawasaki all offering them by 1988. Probably the most annoying feature, however, was the Yamaha’s chain buffer, which was as hard as a rock and noisy enough to be heard over the exhaust. That tell-tale clackity-clack became an unfortunate YZ trademark in the mid-eighties.

In the plus column were the YZ’s slim ergonomics, comfortable seat, easy-to-access filter and excellent overall reliability. Even with its cranky transmission, nothing in the motor broke and the YZ actually became a popular choice for off-road enthusiasts looking for a 125 that could take major punishment. The lack of top-end hurt it in the desert, but the excellent bottom-end torque and plush forks were perfect for woods work. It was a very versatile bike that was fun to ride and durable.

In 1988, Yamaha produced a polarizing 125. Its potent low-to-mid motor made it both unique and more adept off road than your typical 125, but its stubborn gearbox and precipitous drop off in top end made it a hard bike to ride fast. Unlike the typical 125, the YZ was no pin-it-to-the-stops and hang on type of bike. It was a machine that required skill and careful gear selection to make work. Get it right and you flew; get it wrong, and you were left sucking wind as the competition blew by. For those who made it work, the YZ was fast and fun; for those who couldn’t, the YZ was frustrating. For most 125 hot shoes, the Honda CR125 was a better choice, but for those who enjoyed its distinctive flavor, the 1988 YZ125 could be a potent motocross weapon.