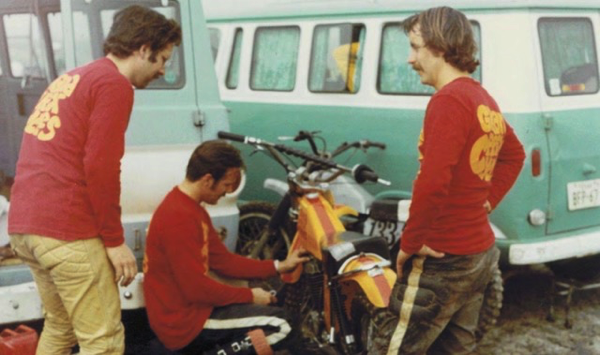 For part five of my motocross gear history series, I am going to take a look back at one of the real powerhouses of the motocross gear industry, Fox Racing.

For part five of my motocross gear history series, I am going to take a look back at one of the real powerhouses of the motocross gear industry, Fox Racing.

For this instalment, we are going to mix things up a bit by enlisting the help of two of the people intimately familiar with the Fox story – founder Geoff, and his oldest son Greg.

Started in 1974 by a Santa Clara University physics professor, The Moto-X Fox (as it was originally known) has grown from a motorcycle dealership mail order operation, into one of the most influential brands in all of action sports. Today, the iconic Fox head logo can be found everywhere from motocross tracks to shopping malls. Even though hardcore fans often lament this mainstream acceptance, it is hard to argue with the success it has brought. For many people outside of the sport, Fox is motocross.

The origins of Fox Racing can be traced all the way back to the mid-sixties, when a young Geoff Fox was attending graduate school at the University of Wisconsin. There, Fox was introduced to the joys of motorcycling by commuting to classes on a Honda CL 175. After a while, he began to notice one of the machines parked next to his on campus was consistently covered in mud and inquired as to how this happened.  This inquiry would lead to Geoff’s introduction to off-road riding and racing. Over the next few years, he would dabble in enduros, trials and even the odd motocross race. Most of all, he was hooked on the excitement and camaraderie of dirt bike riding and took that passion with him back to California after graduation.

By 1969, Geoff had his Ph.D., a new family (with two young boys, Greg and Pete) and a teaching job in the physics department at Santa Clara University. Although a full-time teacher and family man, he continued to make time for the sport he loved. Treating himself to a new Yamaha, Geoff took advantage of the many riding opportunities Northern California in the early seventies had to offer.

It was at this point that Geoff made the acquaintance of Ian MacLachlan. A parts manager at the Yamaha dealer he frequented, MacLachlan and Fox immediately connected over their shared passion for motorcycling. Within a few months, the two had become regular riding buddies.

After about six months of riding and racing together, MacLachlan approached Geoff about striking out on their own and starting a new dealership. At the time, this was just not financially feasible for Fox on his teacher’s income, but he did agree to help MacLachlan by providing some flooring assistance with his new venture. “Flooring” is a term used in the retail world for the up-front financing used to buy inventory. Essentially, if a new bike cost $500 from the manufacturer, Geoff would provide this money upfront to purchase the bike, and then he would recoup his investment, plus interest, once the bike was sold to the final consumer.

While not a huge amount of money, this cash infusion was enough to help MacLachlan and another partner, Chuck Bullwinkle, get Grand Prix Cycles started. At the time, motocross was really starting to take off in America, but just as today, the real money was in parts and service, not new unit sales. On the sales side, margins were small and with dozens of brands available in the early seventies, competition was cutthroat.

After a year or so in business, Bullwinkle decided that he wanted out of Grand Prix Cycles. At this point, Geoff had been flooring bikes a while and felt the time was right to up his investment. After working out the details, Fox purchased Bullwinkle’s stake and became a 49% owner in Grand Prix Cycles. Now an official partner, Geoff quit his teaching job and took on the role of manager of the Santa Clara store (MacLachlan managed the Freemont location).

One of first steps Geoff took toward making the business more profitable was to expand the dealership’s offerings. In addition to the Puchs and American Eagles Grand Prix already dealt with, Maico and CZ were brought in to help fill out their portfolio. At the time, European brands were still considered the premium motocross machines available and the German and Czechoslovakian brands were two of the best.

While excellent on the track, these early Euro machines were far from perfect. Bikes in general at this time were fragile and the European ones could be the finickiest of all. Parts availability could also be an issue, with some things being nearly impossible to obtain. This problem was particularly acute for CZ owners, who had to deal with not just the inefficiencies of communist manufacturing, but also the trade barriers of Cold War-era Europe. Just getting basic goods out of the Soviet Bloc could be a real challenge and communication was often all but nonexistent. This lack of communication trickled all the way down to the owner’s manuals, which were regularly unavailable for the Czech machines. When you bought a CZ, you got the bike, and nothing else.

This oversight would lead Fox to his first major commercial success. After seeing first-hand the difficulty his customer’s had in deciphering and working on the Czech machines, Geoff realized there might be a market for an English-language service manual. Seizing the opportunity, Fox began by disassembling a new CZ and photographing every part. Once done with the photography, he compiled a parts list and wrote out step-by-step instructions on how to service it.

Retailing for a paltry $7.50, his CZ service manual flew off the shelves a fast as they could print them. Eventually, Fox would sell 5000 of his 150-page manuals to grateful CZ owners. After seeing this success, Geoff decided that there might be some real opportunity in mail order parts and accessories. This change in focus would eventually lead to tension between he and MacLachlan. At the time, MacLachlan was more interested in obtaining additional dealerships than selling handlebars through the mail. Coming to an impasse, Fox decided he wanted out, and in 1973, agreed to be bought out of his share of Grand Prix Cycles.

After the split, Fox decided it was time to give the motorcycle mail order thing his full effort. Motocross, and the whole motorcycle industry was booming, and if there was ever going to be a time to take the plunge, this was it.  Betting on himself, he acquired a 1500-square foot warehouse on McGilncy Avenue in Campbell, California enlisted his dad as a bookkeeper, and set about building a motocross empire.

If, after reading this, you would like to learn even more about Fox Racing’s origins, make sure you check out the great podcast Matthes did with Pete Fox a few years back where he covers a lot of what we talk about here. If interested, you can grab it HERE.

If you enjoy this and would like to read more about Answer Racing, you can check out our look back at them HERE  and  HERE

If JT Racing is more your speed, you can read all about their rise and fall HERE  and HERE.

Thanks to Geoff and Greg for helping out telling the story of Fox Racing.

Next up: Moto Gear History Part VI – Fox Racing in the 1990s