For this edition of GP’s Classic Steel, we are going to take a look back at Yamaha’s all-new YZ125 for 1993. 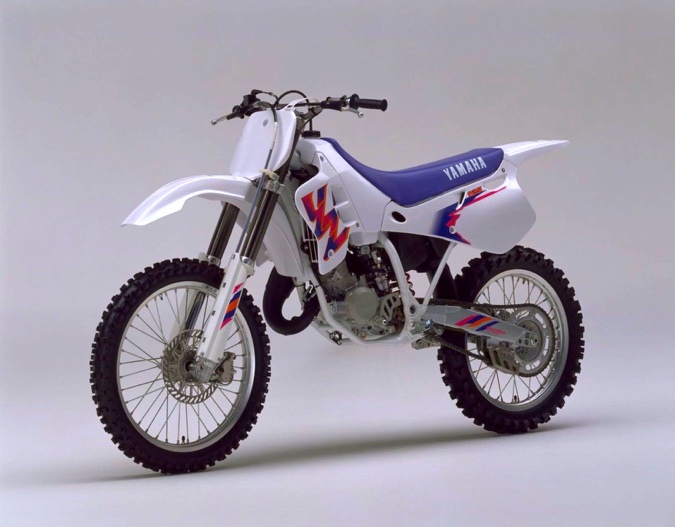 In 1993, Yamaha looked to break its string of disappointing tiddlers with an all-new YZ125. Photo Credit: Yamaha

It is no secret that Yamaha’s YZ125 endured a tough run in the late eighties and early nineties. During that era, the tuning-fork-tiddlers were repeatedly outclassed by their rivals.  A new motor revived hopes in 1986, but cranky shifting and a narrow powerband held it back from claiming the top spot in the standings. Chassis updates and suspension upgrades continued to refine the YZ package throughout the rest of the decade, but its one-dimensional motor remained a handicap on an otherwise solid racer.

The 1993 Yamaha YZ250 and YZ125 were new from the ground up, with the notable exception of their motors. On the 250, this was no great handicap, but on the 125, it held back an otherwise excellent package.  Photo Credit: Yamaha

By 1992, this handicap had become an albatross around the YZ’s neck. The stock bike was slow to the point of being painful and no longer competitive in anything above the novice class. It handled well and was suspended decently, but lacked the thrust to keep up with a well-running mini. It was slow-to-rev, hard to keep on the pipe, and an absolute disaster. 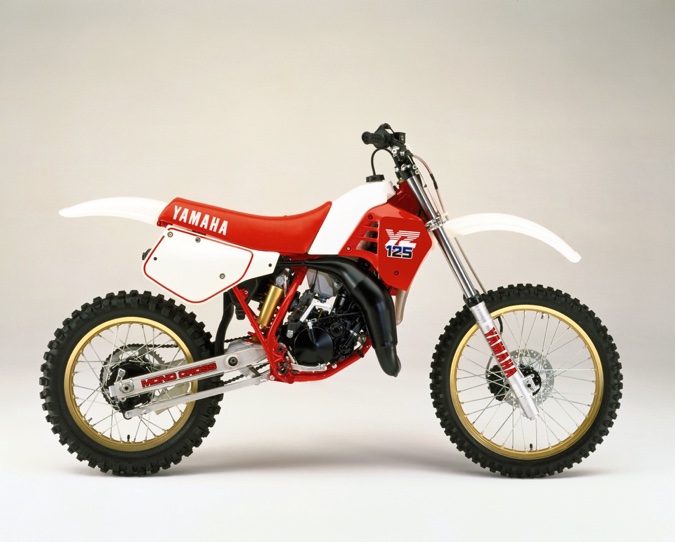 For 1993, Yamaha looked to put those bad memories in the rearview mirror with an all-new YZ125.  The ‘93 bike featured a totally new frame, redesigned bodywork and majorly revised suspension. Unfortunately, the one thing they did not really change was the motor. By this point, the YZ’s 124cc case-reed motor was very clearly past its prime, but with an all-new YZ80 and YZ250 also on tap for 1993, there was just not enough money in the budget to redesign the motor for ’93. 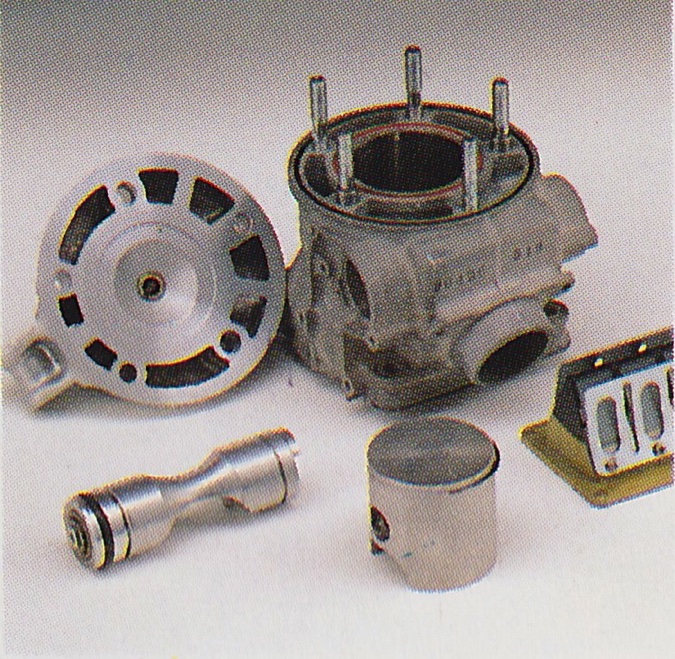 For 1993, Yamaha looked to extract a few more ponies out of their eighth-liter racer by spec’ing an all-new cylinder that repositioned the YPVS valve closer to the exhaust port for better sealing. Photo Credit: Yamaha

Even though the basic motor design remained the same, Yamaha did make several changes aimed at upgrading the YZ’s anemic performance. First up was a new cylinder that repositioned the YPVS (Yamaha Power Valve System) drum closer to the exhaust port for better sealing. The new cylinder also featured revised porting and a new combustion chamber for better flow and a cleaner burn. A new “low boy” pipe was bolted on that featured better scavenging and a lower center of gravity to improve handling. In addition to offering better weight distribution, the new lower pipe also moved the hot exhaust away from the airbox to aid in keeping the air entering the motor cooler for improved performance. 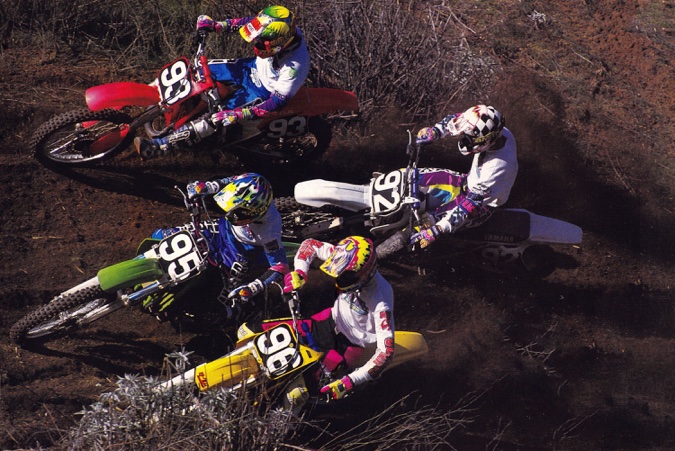 The YZ125 brought a knife to a gunfight in 1993. Photo Credit: Motocross Action

The airbox was also enlarged for ’93 and featured a new intake that drew air directly from a vent at the back of the seat. This, combined with the cooler charge provided by repositioning the exhaust, was supposed to provide better throttle response for ’93. The intake remained a case-reed and carburation was handled by a 35mm flat-slide Mikuni TM mixer. In the bottom end, Yamaha added an additional plate to the clutch to improve durability and a new coating to the shift forks to hopefully smooth out the YZ’s infamously poor shifting. Last up in the power department were new radiators that increased capacity 15% to handle the (hopefully) increased power for ’93. 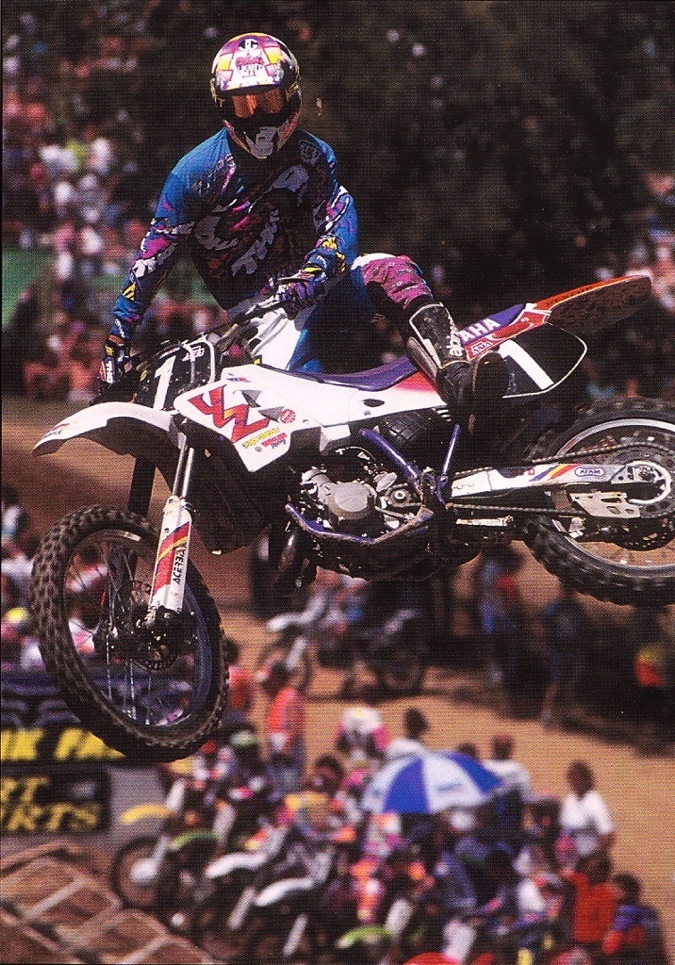 Yamaha’s Jeff Emig did not let the failings of the stock YZ125 hold him back from running at the front of the pack in 1993.  Photo Credit: Motocross Action

While the motor changes for 1993 were not earth shattering, they did add up to a slightly better power package than the year before. The new motor offered a broader pull than 1992 and a little more power throughout. There was not much torque off the bottom, but the new bike did pick up better than the ’92. As with every YZ125 since 1986, it did its best work in the midrange, but even there, it was not very impressive. Once past the midrange, it flattened out quickly and preferred to be shifted rather than wrung out. If you tried to keep it pinned, it tapered off less drastically than previous YZs, but screaming it was still not the best way to make use of its power. To make time on the YZ, it was best to shift right past the torque peak in the midrange and not allow it to fall off the pipe. If you could keep it in its narrow sweet spot, it was not a total disaster, but keeping it there required a great deal of skill. Overall, the new bike was easier to ride and slightly faster than the ‘92, but still quite a bit slower than any of its 125cc rivals. 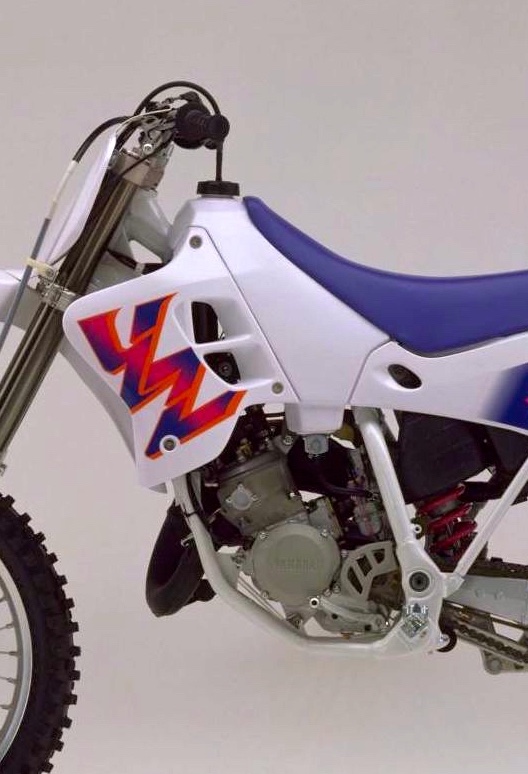 Weezer: The stock YZ125 offered a broader pull for ’93, but not a lot more power. It was smooth and easy to ride for newbies, but too slow for anyone above the novice class. Compared to its rivals, it offered less power at every point on the curve and required major engine mods to run at a competitive pace. Photo Credit: Yamaha

On the chassis front, the new YZ was more successful. The new frame maintained the overall geometry of 1992, but offered a claimed 50% greater rigidity, better ground clearance and (finally) a fully removable rear subframe. New bodywork was also slimmer through the middle and flatter on top to make moving around easier than ever before. On the track, the new chassis offered an excellent combination of turning and stability. It was not as sharp as the twitchy RM and CR, but far nimbler than the freight-train-like KX. It offered a solid middle-of-the-road package that did everything well, but nothing spectacularly. It was not going to dive underneath a CR, but neither was it going to pitch you off unexpectedly on that four-gear straight like an RM. It was solid, predictable, and confidence inspiring. 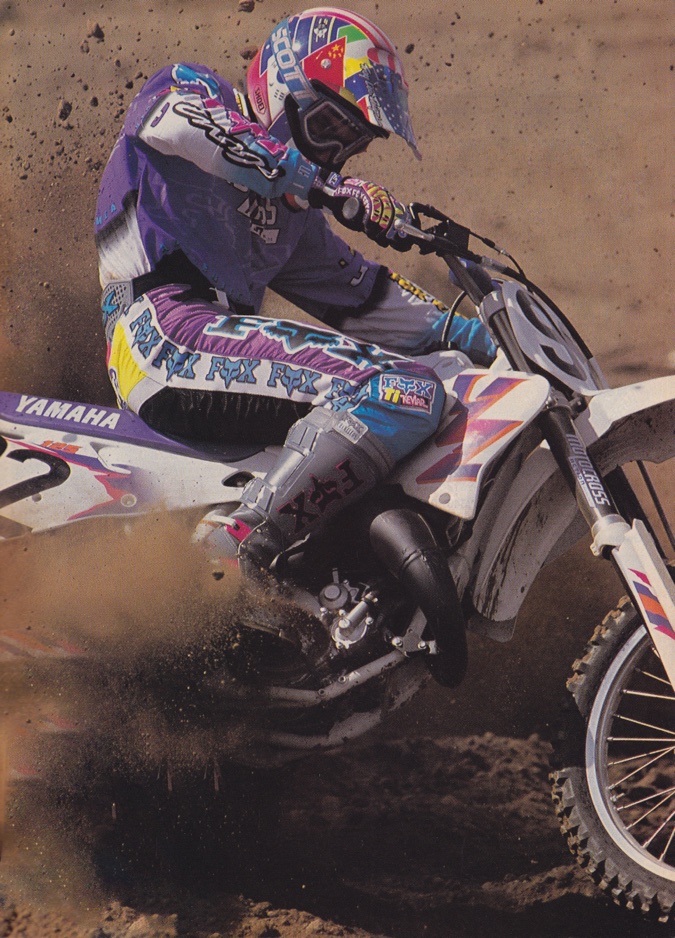 All or nothing:  Total commitment and a locked right wrist were the only ways for a YZ pilot to keep the red, green and yellow competition in their sights in 1993. Photo Credit: Chris Hultner

Some of the credit for the YZ’s excellent handling certainly went to its new suspension. For 1993, Yamaha redesigned the internals on their 43mm inverted Kayaba units to allow increased oil flow and provide better cooling. The cartridge rod diameter was increased from 20mm to 25mm and new low-friction bushings were added to fight stiction. In addition to new valving, the spring rates were also bumped up to provide a more balanced ride. 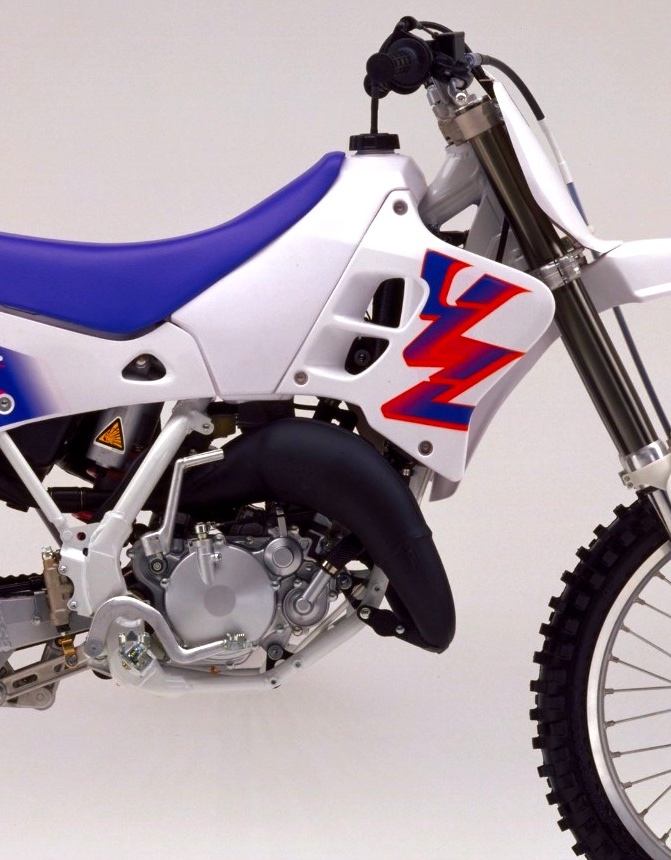 Since its introduction in 1986, one of the major gripes with Yamaha’s case-reed motor was its recalcitrant shifting. For 1993, Yamaha added a new special coating to the shift forks in an attempt to slicken up its notchy engagement. While slightly better than the ‘92, it continued to be the most stubborn cog-box in the class. Photo Credit: Yamaha 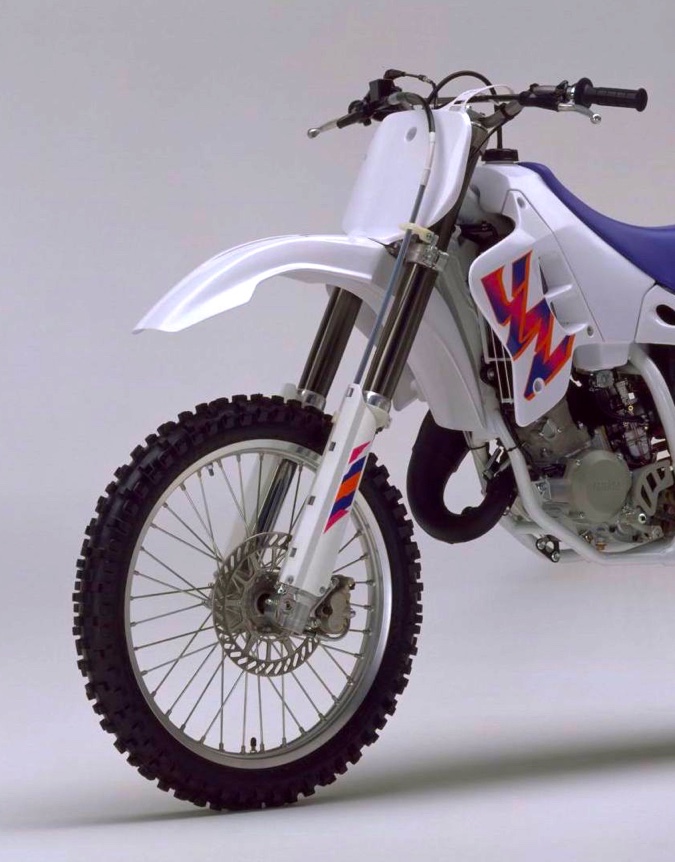 One of the best features on the new YZ125 were its excellent 43mm Kayaba forks. Plush in action and well sprung, these were some of the best silverware available in 1993. Photo Credit: Yamaha

Out back, an all-new Kayaba shock was paired with a redesigned Monocross linkage and new Deltabox swingarm.  The new linkage offered a revised curve and a more compact layout that did away with the low-hanging “cow catcher” design of the ’92, while the new damper featured a 2mm larger shock shaft, increased oil capacity, revised damping, and new seals to improve performance. Travel remained the same at 12.8 inches and the shock offered adjustments for both compression and rebound damping. 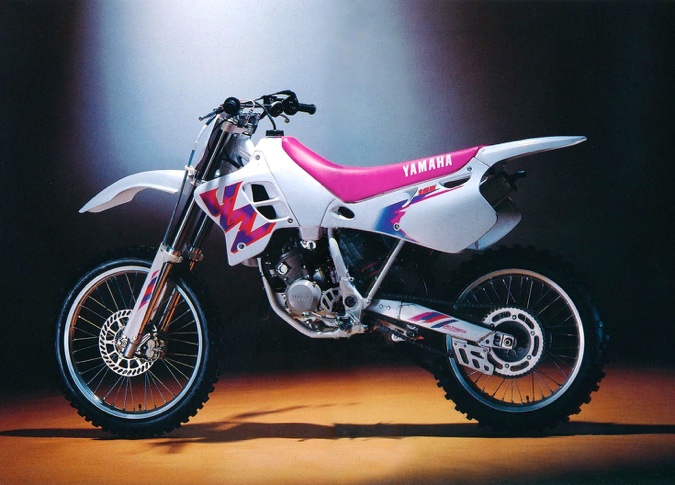 While YZs bound for the USA dropped the magenta color of ’91-’92 in favor of a purple hue, Yamahas headed for the UK and some other markets retained the pink look for ’93. Photo Credit: Yamaha

On the track, both ends of the YZ were improved for ’93.  The forks in particular were excellent, taking hits big and small with equal aplomb. It was sprung well for faster riders and stayed plush even on hard hits. They were not quite as buttery smooth as the KX’s amazing forks, but they were head and shoulders better than the Showa units found on the RM and CR. 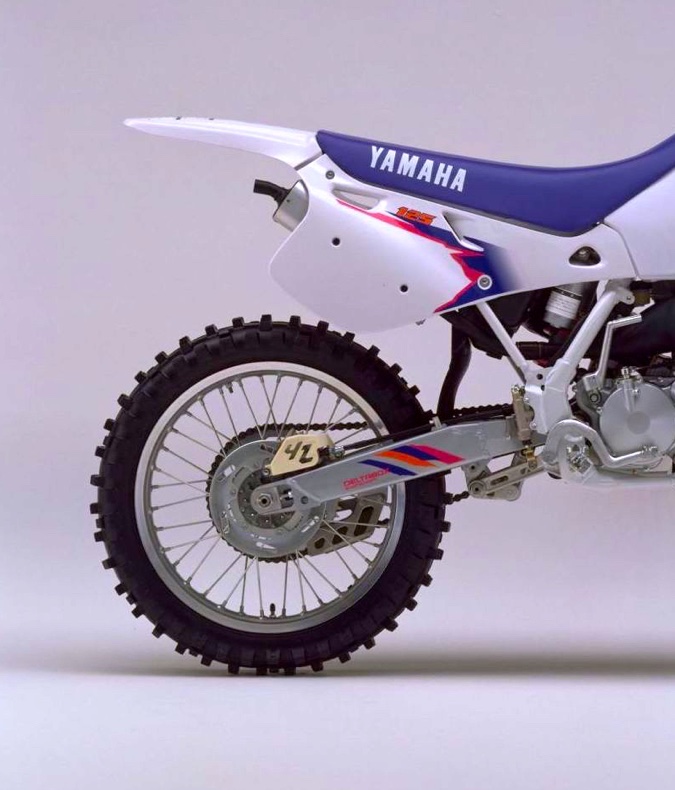 A totally redesigned Monocross suspension graced the rear of the 1993 YZ125. While not quite as well-sorted as the front forks, it was easily the second-best rear end of 1993. Photo Credit: Yamaha

In the rear, the YZ’s damper was equally improved for 1993. The new frame, linkage and swingarm contributed to a 38-percent increase in torsional rigidity over 1992 and the new bike offered a much more solid feel in the rough. The shock was sprung somewhat stiffly for slower or lighter pilots, but it was just perfect for aggressive riders. It absorbed anything short of a supercross track in stride and could be charged into whoops and large obstacles without fear of the bike kicking or doing anything funny. Again, it was not as ultra-plush as the Kawasaki, but better than the RM and way better than the CR. 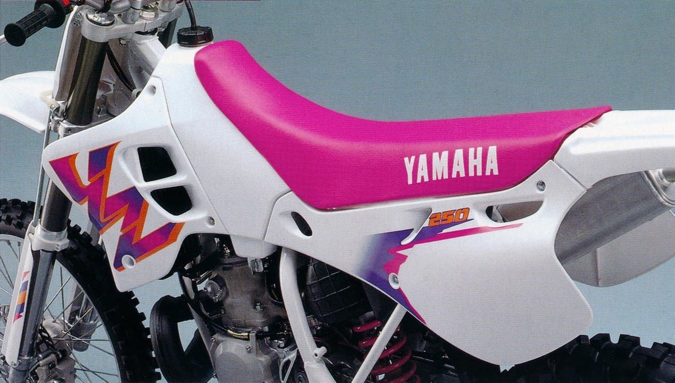 Even though the ’93 YZ125 was down on power compared to its rivals, it was not without merit as a racing machine. It offed the best overall mix of handling traits in the class, excellent suspension, and a light feel. If it had only had a little more power, it would have been champ. Photo Credit: Karel Kramer/ Dirt Rider 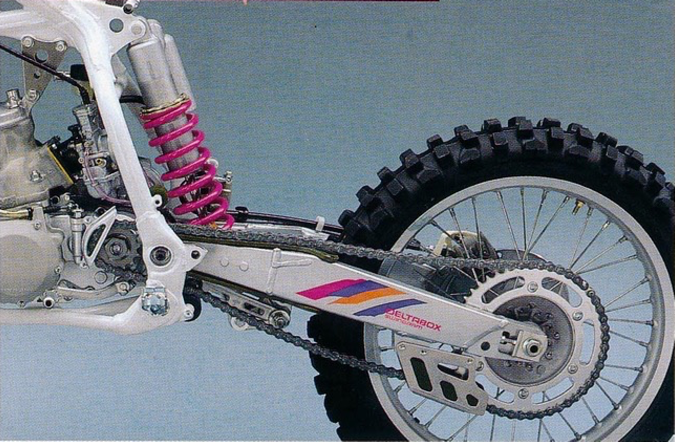 All-new plastic for 1993 smoothed the lines and flattened out the rider compartment of the YZ125 and YZ250. Photo Credit: Yamaha

In the details department, the YZ was also much-improved over 1992. The new plastic did away with the weirdly-bulging right side panel of ’91-’92 and replaced it with a far sleeker profile. The new seat was also flatter and taller than 1992. While this made moving about easier, some shorter riders lamented the new roomier layout. Overall, the new plastic was well received, but care had to be taken to prevent boots from snagging the radiator wings and pulling them out of their mounting holes. The grab handles built into the side panels were also a nice (and MXA approved) touch. 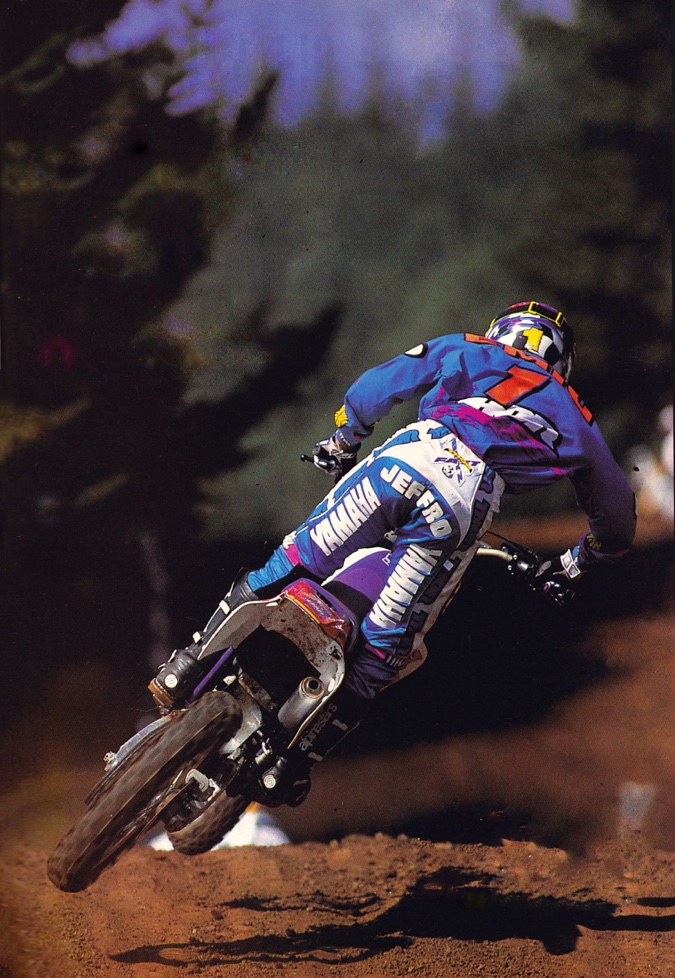 In 1993, Jeff Emig was the often the fastest man in the class on his Steve Butler-tuned YZ125, but a lack of consistency prevented him from repeating as 125 National champ. Photo Credit: Ken Faught 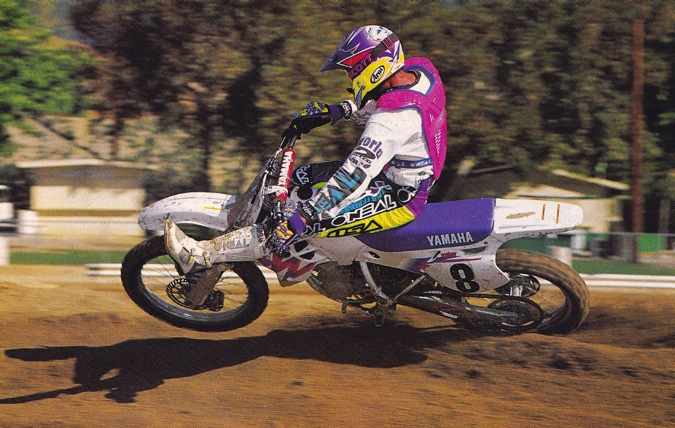 Better late than never: A full decade after Honda and KTM added it to their machines, Yamaha finally added a fully removable subframe to the 1993 YZs. Photo Credit: Yamaha

Maybe most welcome of all the changes in 1993 was the addition of a fully removable rear subframe for the first time. This time-saving feature had been seen on Hondas for a decade, but Yamaha had been reluctant to install one on the YZs. In 1993, shock servicing finally moved into the eighties for Yamaha pilots. Braking, reliability and component quality were also very good for 1993. The bike may have been slow, but at least it did not blow up every ten minutes like the very fast but very fragile KX125. 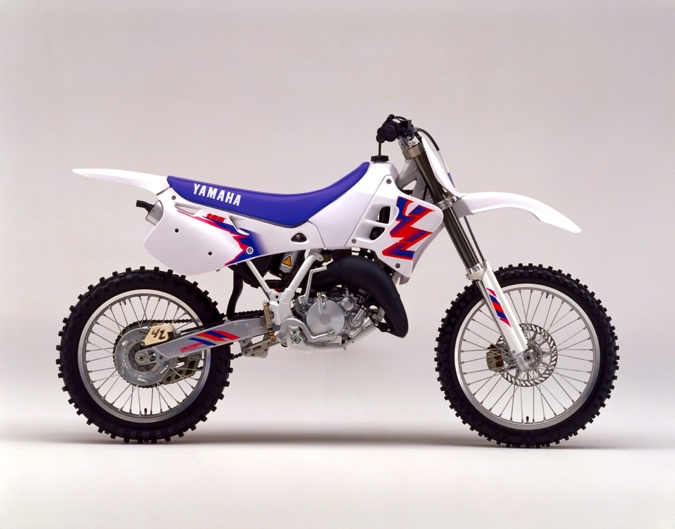 In 1993, Yamaha improved everything about their 125 racer, except the one thing that mattered most.  Photo Credit: Yamaha

Overall, the 1993 Yamaha was an excellent motorcycle, in need of a major power transplant. It handled well, looked sano and gobbled up the track, but lacked the power to run at the front. While less peaky than previous offerings, the new-look YZ offered up very familiar performance. In the 250 or 500 division, its other virtues probably would have made up for its relative lack of thrust, but in the motor-is-everything 125 class, it was paramount to a death sentence.

Pay The Man! Contingency and What it's all About