I have been riding the 2018.5 Husqvarna FC 450 Rockstar Edition A LOT. Over the course of only a few months I have over 50 hours on the test unit I have. I am in love with how well it works on the track, how easy it is to ride and how light it feels through corners. Yes, that’s right even with the WP 48mm AER fork it is still pretty damn good. However, I can’t leave well enough alone and must tinker with things to see if I could get the white edissssshhhh even better than where it’s at currently. I called the guys at WP to see about getting a set of their Cone Valve Fork’s and Trax Shock to see if this sucker can improve even more. The Cone Valve fork and Trax shock is basically WP’s A-kit option for us average dudes out there. Yes, it is expensive, but if you are in the market for close-to-factory level suspension, it is considerably less money than the Showa A-kit sets that are for sale. The Cone Valve fork and Trax sock can be purchased at any authorized WP dealer. Your dealer then can get you your own valving set up, but for this test WP valved my stuff for me directly. WP even offers the Cone Valve and Trax suspension for the Honda, Kawasaki, Husqvarna, KTM, and Suzuki models. So is it worth the money? I rode the stock suspension and Cone Valve/Trax set ups at several different tracks and here is what I came away with: 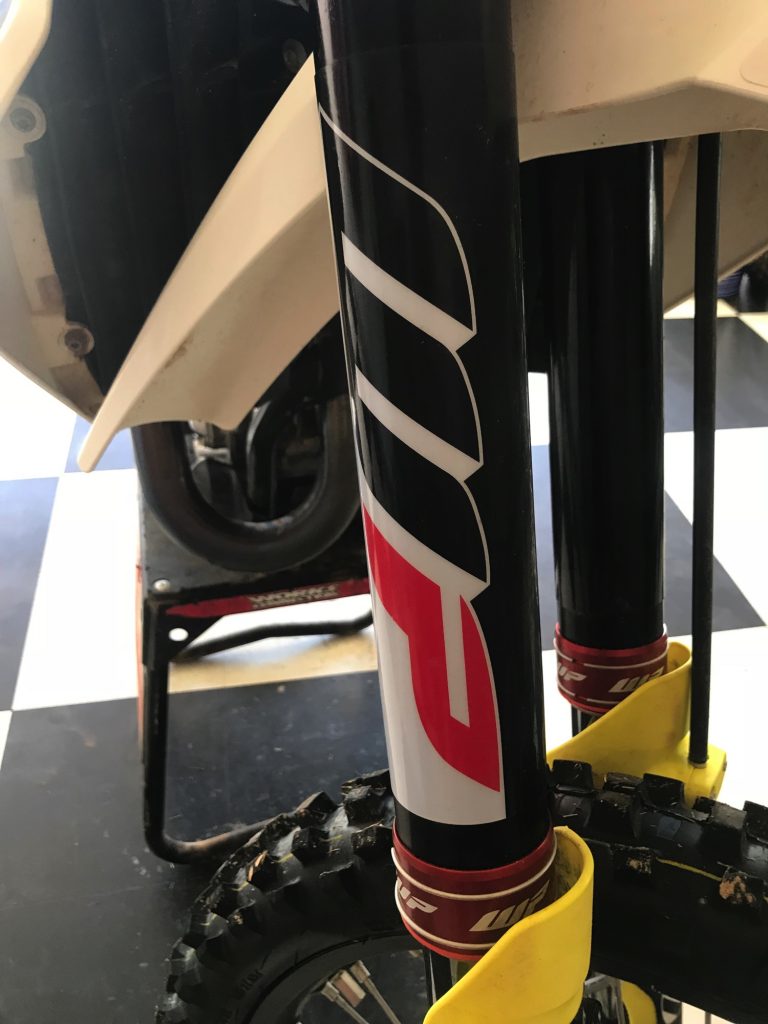 We are dealing with two totally different types of fork’s here, so the feel on the track is going to be completely different. The stock AER fork is the best air fork on the market, but still doesn’t have that predictability over the course of a full day of racing/riding. I will find a good setting with the AER fork and it changes slightly throughout the day. The first thing I noticed when I when out on the track with the Cone Valve fork was that the Husqvarna turned slightly slower on initial lean (into corners). You can actually feel the extra weight right away in the front end, but it wasn’t a bad feeling, I was just surprised I could feel it this much when entering corners. I started out with a fork height of 3mm up in the fork, but went with a 5mm height setting after I felt the slower front end lean feel. Along with the extra weight feeling however I gained more front end traction through every corner (especially flat corners). The Cone Valve fork leaves you with a more front end tire contact patch sensation and you can lean over more in ruts without getting the high front end, vague feeling like I did with the AER fork. With the AER fork I get some pushing in the front end through the middle to end of the corner, which made me roll off the throttle to try and compensate. With the Cone Valve fork I can lean in the corner and the fork stayed planted, which let my front end settle and bite. The CV fork also felt less active on braking bumps. I am able to jump in and out of bigger bumps without having the fork rebound too quick. If I wanted to pound through the bumps, the fork had a better damping control feeling through the middle to end part of the stroke. The most notable change was to my wrists when over jumping or flat landing with the Cone Valve fork. The AER fork holds up well, but I feel like it stops at the end of its stroke leaving me with a spike feeling that jolts up through my hands. With the Cone Valve fork, it’s a smoother action feel and I have less harshness at the end of the stroke than I do with the AER fork. You are getting more comfort and performance with the spring CV fork than you are with the AER. The only downside I can see from going to the CV fork is the weight (which didn’t bother me after a few laps) and spending the money to switch over to spring. It’s costly! The guys over at WP have great settings that can get shared with authorized dealers if need be to get you comfortable in a hurry. It only took me got me two settings to get to where I was happy with my fork setting. 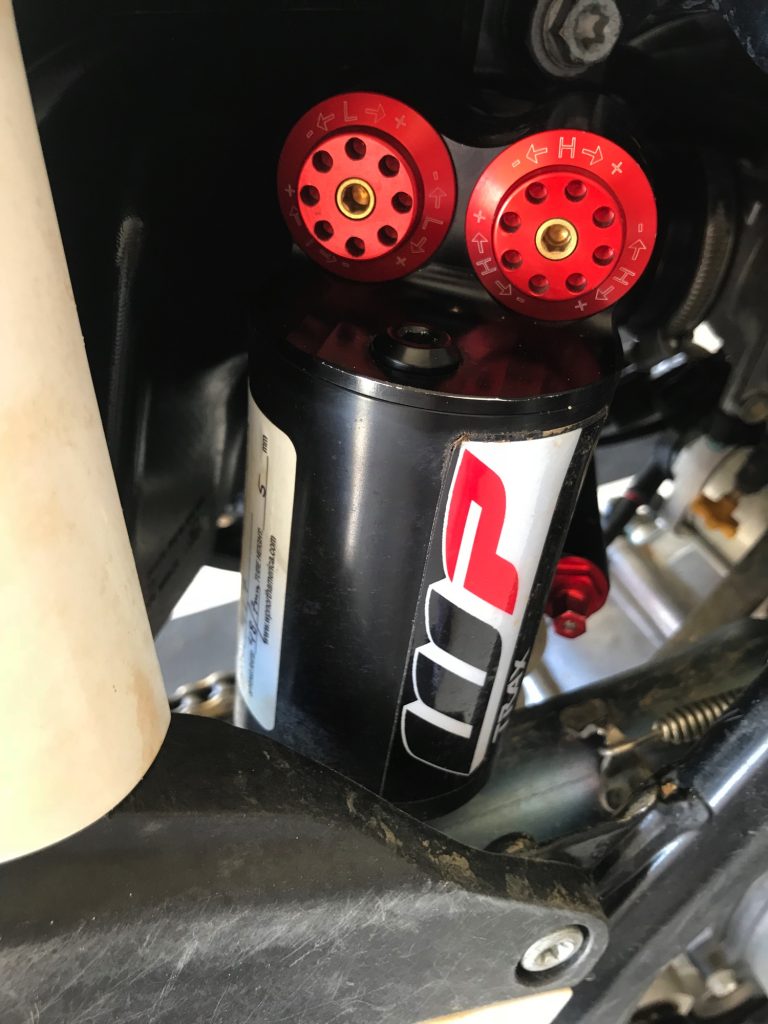 The Trax shock gave the rear of the Rockstar 450 machine a firmer feeling than the standard shock, but it wasn’t so firm that it beat you up around the track. Unlike the CV fork, you will lose a little comfort on small bump absorption, but gain performance on bigger bumps on the track. Where the stock shock will blow through at the end of the stroke (high speed compression) the Trax shock holds up better and you are able to get more aggressive around the track. I can hit the faces of jumps harder and the Husqvarna will not give you an empty, low feeling sensation that the stock shock sometimes gave me. In order to combat that feeling with the stock shock I would have to crank up the high speed compression so much that I lost the comfort coming out of corners (and rear wheel traction). The Trax shock provides you with more high-speed damping and you still get a decent amount of acceleration comfort. I also noticed a little more connectivity to the the rear wheel (when hard on the gas) on flat corners with the Trax shock. The Trax shock is firmer so there is less wallow in the rear end when accelerating, so the rear of the FC450 tracks straighter and doesn’t upset the chassis. “Balanced” is a great word to describe both ends of the Husqvarna Rockstar Edition now (with the cone valve fork and Trax shock). I have the Trax system turned “off” for my setting as I felt like it had more of a dead feeling (which is a feeling that I like). A “dead feeling” is where the bike can be pushed hard into braking bumps or square edge chop and will not move or react as quickly. With the Trax “on” the rear wheel followed the ground slightly better out of choppy ruts/corners, but reacted too quickly when coming into large braking bumps when entering corners. I would think the Trax system would benefit an off-road rider that needs his rear end to move and follow the ground more at higher speeds (think west coast off-road). I ran the sag a little higher at 103mm (rather than the standard 105mm) and this seemed to be the happy spot where the Husqvarna felt less rear end low. The Trax shock is very finicky to adjustments so make sure you only do very small 1 click increments as you will be able to feel each change you make. 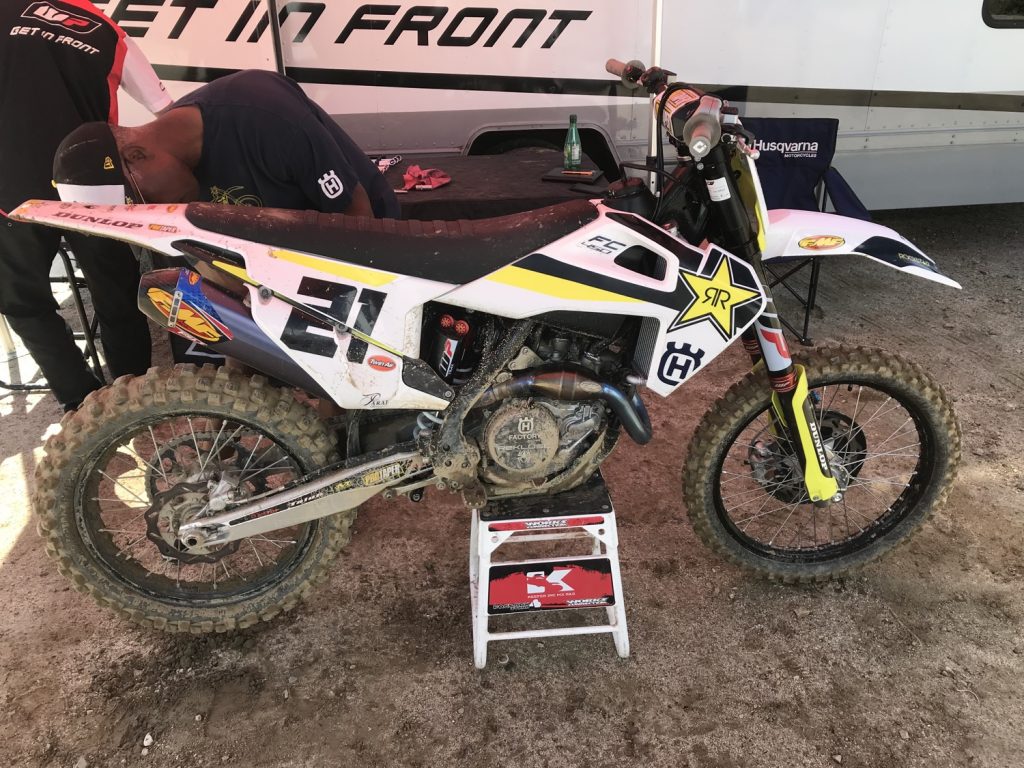 If I was a Husqvarna Rockstar Edition owner (which I might be in the near future) and I was looking for that next level performance, this WP set up would be a great choice. I have always felt more of an upside going from stock to WP A-Kit level suspension on a Husqvarna/KTM than I have with a KYB or Showa A-Kit level on a Yamaha or Honda. While it is expensive to obtain these bump sticks it is slightly cheaper than other “Kit” level suspension. Remember when WP wasn’t the best set of suspension you could get on a bike? All of that is long gone now as WP has come a long way with their suspension and now one of the leaders in suspension performance and comfort. I know Matthes is sick of hearing about this bike, but I can’t wait to keep riding the crap out of this thing. The WP CV fork and Trax shock is huge reason why my Husqvarna FC450 Rockstar Edition test bike works so damn good!