If there is one 2019 450 motocross machine that I think has the fastest overall engine character, it would have to be the Honda CRF450R. This engine is basically a race engine out of the crate. If you want to get to point A to point B in a quick manner, this Honda is the engine for you. So why on earth would you need more power? To me you wouldn’t need MORE, but maybe you can massage that power and move it around so that the engine delivery is slightly more controllable. This is where the KTM and Yamaha engines are better than the red machine. Both have more controlled power when the track gets rough or slippery. Controlled power is crucial in today’s 450cc world and a good muffler system can give you exactly this, if it’s a good system. Key word here people is “IF” it’s a good system. It is not as simple as reading dyno charts and slapping it on your bike. It requires real world track testing to feel the power character as well. We wanted to install/test a muffler system on our 2019 Honda CRF450R (that we purchased ourselves) to see if we could improve on a power plant that was already pretty damn impressive. We chose the Yoshimura RS-9 full titanium muffler system to try back to back with the stock system to see if it was in fact, what we were looking for. 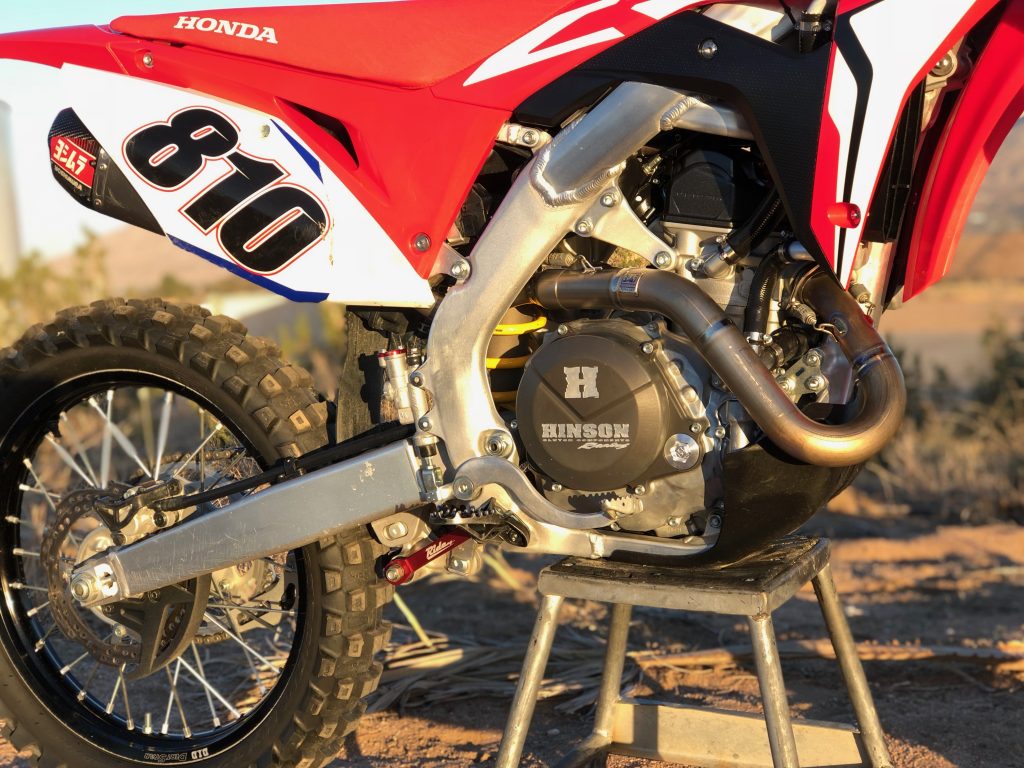 When I originally tested the 2017-2018 CRF450R Yoshimura RS-9 system, we thought it was a pretty damn good system that was better than stock. However, the 2019 CRF450R stock exhaust changed for the better, so Yoshimura went to work on a new headpipe design to try and achieve even more power (than the stock 2019 exhaust system). Yoshimura also wanted to tuck in the new headpipe design, so it was less susceptible to crashes. Note: The “RWE” Yoshimura headpipe is the same as the “R” Yoshimura headpipe.

Once installed and on the track the Honda’s exhaust note turned from the high pitch semi raspy stock sound to a deep throaty, more traditional 450 factory race bike sound. The crack of the throttle (or RPM response) is slightly smoother and less crisp than that of the stock system, but bottom end pulling power is increased over stock. Rolling out of corners, in second or third gear lets the rear wheel find increased traction over stock and was more controllable while accelerating out of hard pack corners. The slightly smoother RPM response takes away the Honda’s exciting feel slightly, but helps you gain a little more control coming out of corners. This is what I was looking for in a Honda CRF450R muffler! The mid range pull is healthier, with more meat, than stock and while the stock system had a tough time pulling third gear in tight/slower corners (without a gearing change), the Yoshimura system will give you an easier time rolling third gear in those tighter corners. With just the flick of the clutch lever (in third gear) the Honda will be in the meat of the power once again and have you down the straight in a hurry. We noticed top end and over-rev was better than stock, as the Yoshimura system helps the Honda carry second and third gears longer. It pulls amazingly well on deeply tilled dirt in second and third gear and there wasn’t a time where I thought to myself  “I need more top end pulling power”. You could tell Yoshimura was focused on controlling, yet increasing, the bottom to mid-range pulling power when they designed this 2019 CRF450R muffler system and they succeeded in doing so. It’s also impressive that they didn’t lose any top end and over-rev in the process, in fact they got some extra! 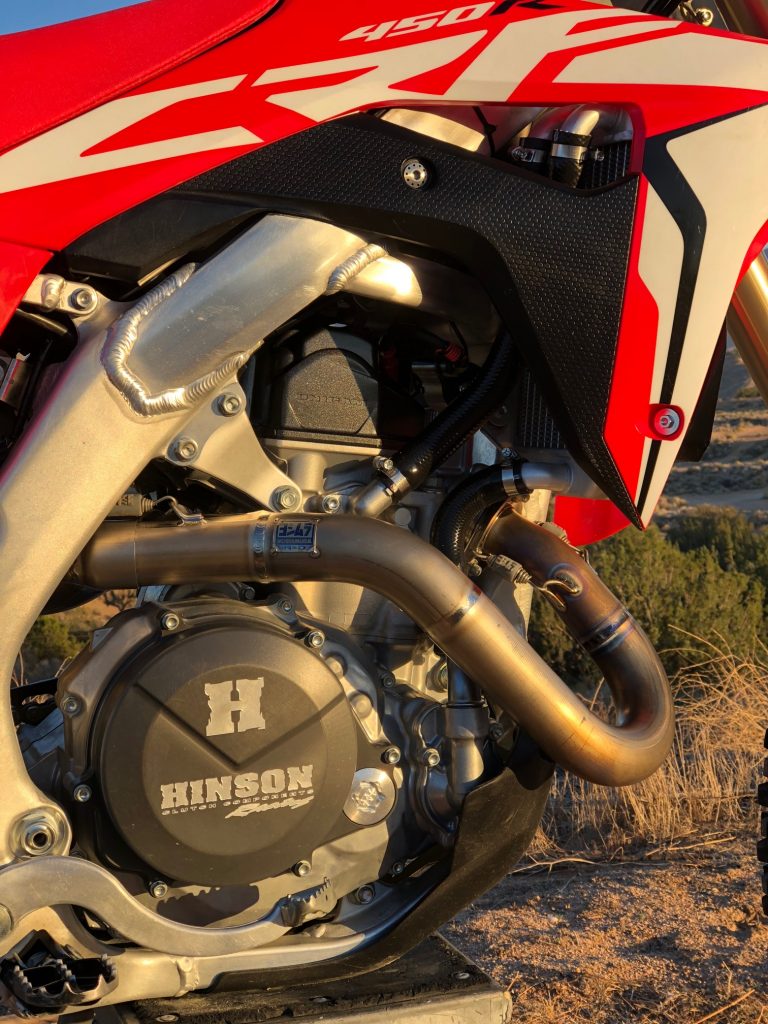 After weighing both the stock and Yoshimura RS-9T systems you will be saving almost two full pounds, which is great since the Honda is on the heavier side (on paper) for a 450cc motocross motorcycle. This is a significant weight loss but for $1,499.00 it is a very pricey bolt on modification. If you are looking to save a little money, Yoshimura offers the stainless steel/carbon version for $980.00, but you will not be saving much weight (only half a pound).

Again you can’t say enough about the craftsmanship that goes into a Yoshimura system. The welds are flawless and the mufflers tuck up inside the side number plates for a stealthy, compact look. If you’re looking for a little added pulling power, with more control/connection on the track, and not to mention sexiness out your new 2019 Honda CRF450R, the Yoshimura RS-9T system will help you do all of those things very well. You will have to decide if you want to dip into your checking account to pay for these added features, but if you’re in the market for a 2019 Honda CRF450R muffler, there is not a better system out there for this model. The Yoshimura system has held up great over my years of testing them and you can even send your system back for Yoshimura to re-furbish if you choose (for a fee of course). You can head over to Yoshimura-rd.com to get yours or call them at 800-634-9166.