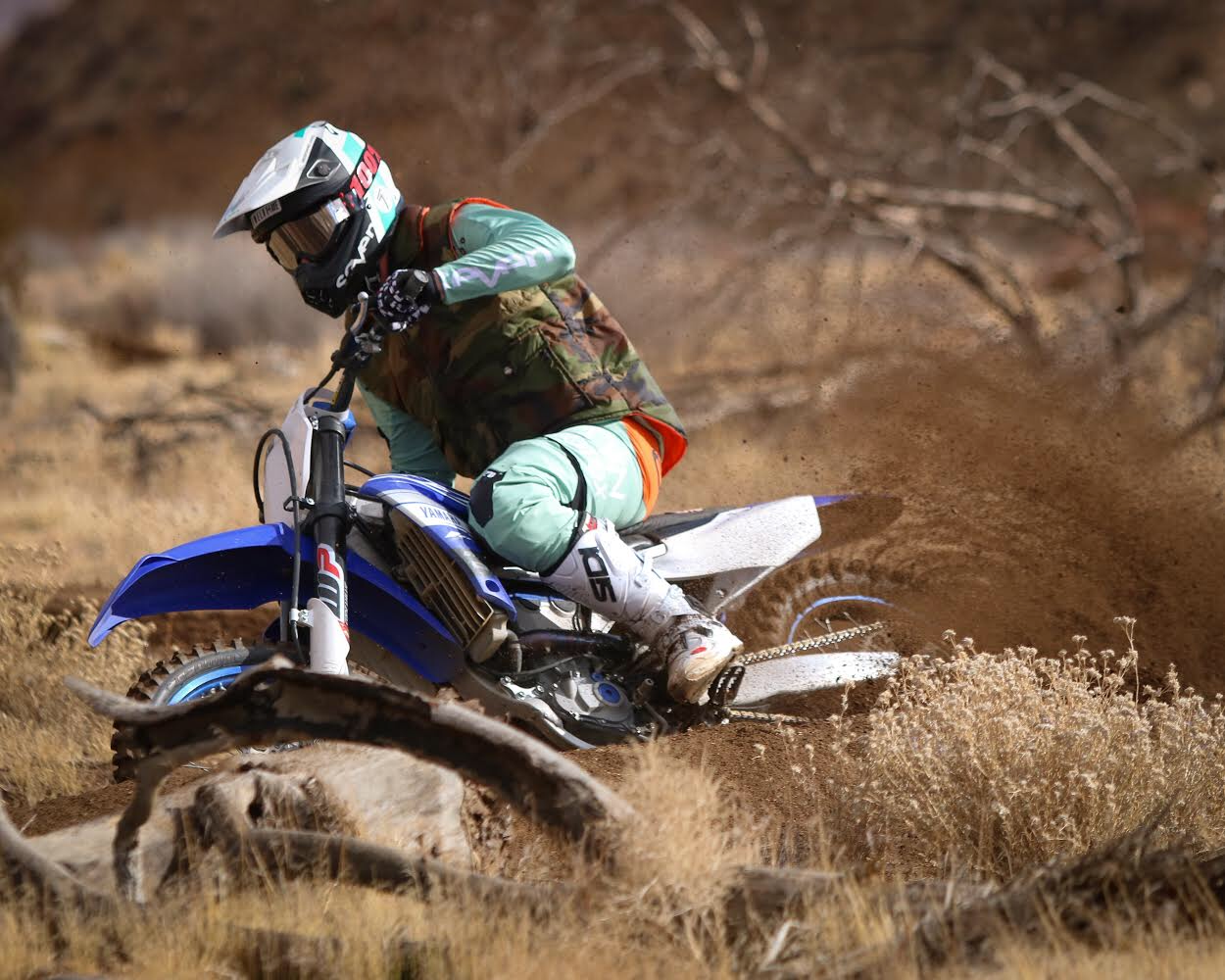 Before you get all crazy and say “You just screwed up the Yamaha Keefer”, just calm down a little. You’re only as good as what you try, so why not try something outside the box. I decided to test the WP Cone Valve Fork/Trax Shock for the 2019 YZ450F to see how it compared to the stock suspension and a set of re-valved KYB/Enzo suspension. Yes, WP makes suspension for Japanese models and I have had some success with WP on a Honda, so why not try a blue bike now. I went out for a full day of testing with WP at Glen Helen, then took what I thought was the best setting and rode with it at several other tracks for almost a month to see how it compared to the other two sets of suspension. This was an interesting test for me because I am very comfortable on KYB suspension so to tie with something so different really let me pick the WP suspension apart. Below are my findings: 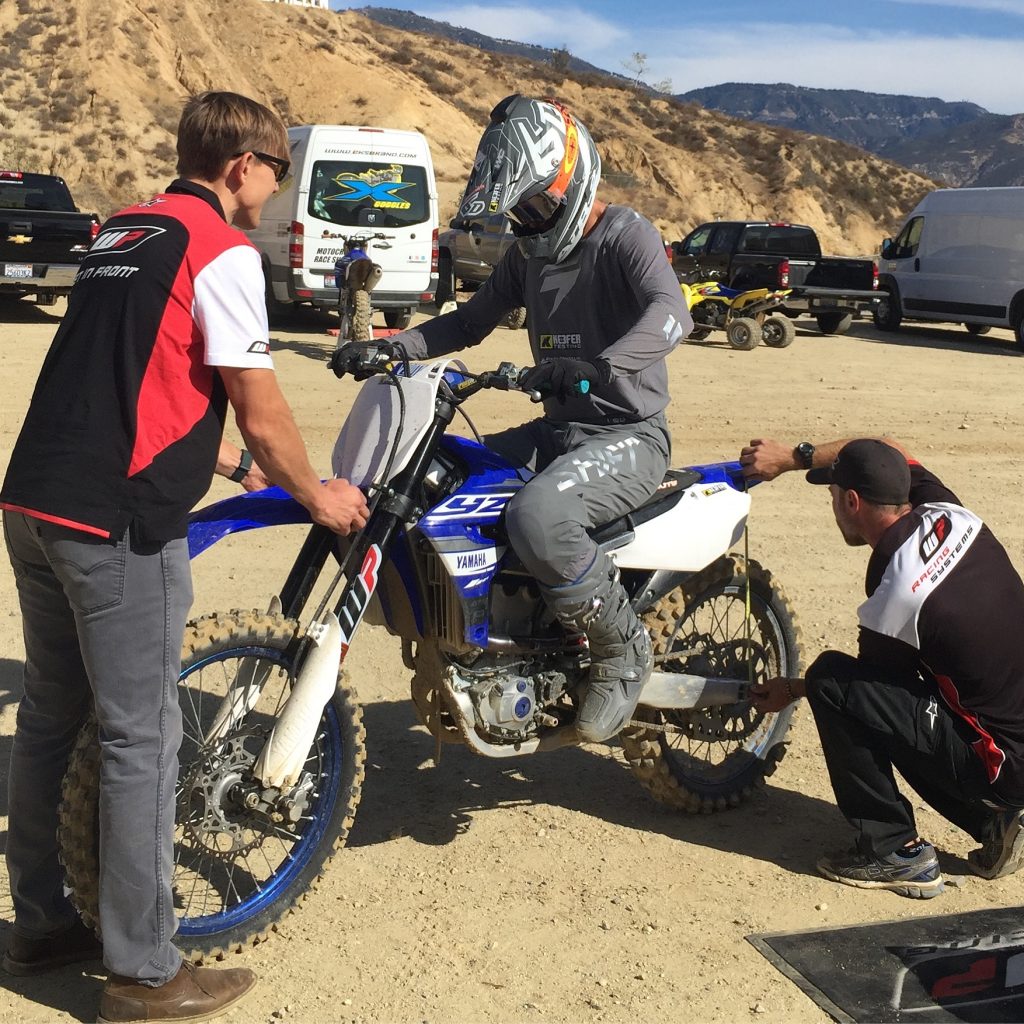 We are dealing with three totally different types of settings on these forks, so the feel on the track is going to be completely different. The stock KYB fork is the best production fork on the market, but still is a little soft at times for my front end aggressive type of riding style. The KYB/Enzo fork has better hold up, but requires me to really be aggressive when riding the Yamaha. If I get lazy or tired the fork can beat me up at times, but this fork allows me to push my limits without making me feel sketchy. The first thing I noticed when I when out on the track was that the WP Cone Valve fork cornered slightly better on initial lean into corners (compared to the stock and Enzo forks). You can actually feel the extra front end bite right away in the front end, but it wasn’t a drastic feel, just enough to where I feel like I could cut down earlier from corners (change of line direction). I started out with a fork height of 5mm and it ended up staying at the height for the remainder of the test. Along with the extra bite in corners I noticed that that CV fork moved in the stroke less than the other two forks. The feeling of the CV fork has more of a dead feel than that of the other two KYB sets. The CV fork felt less active on braking bumps, which gave me a ton of confidence charging into rough corners. I was able to jump in and out of bigger bumps without having the fork rebound too quick. 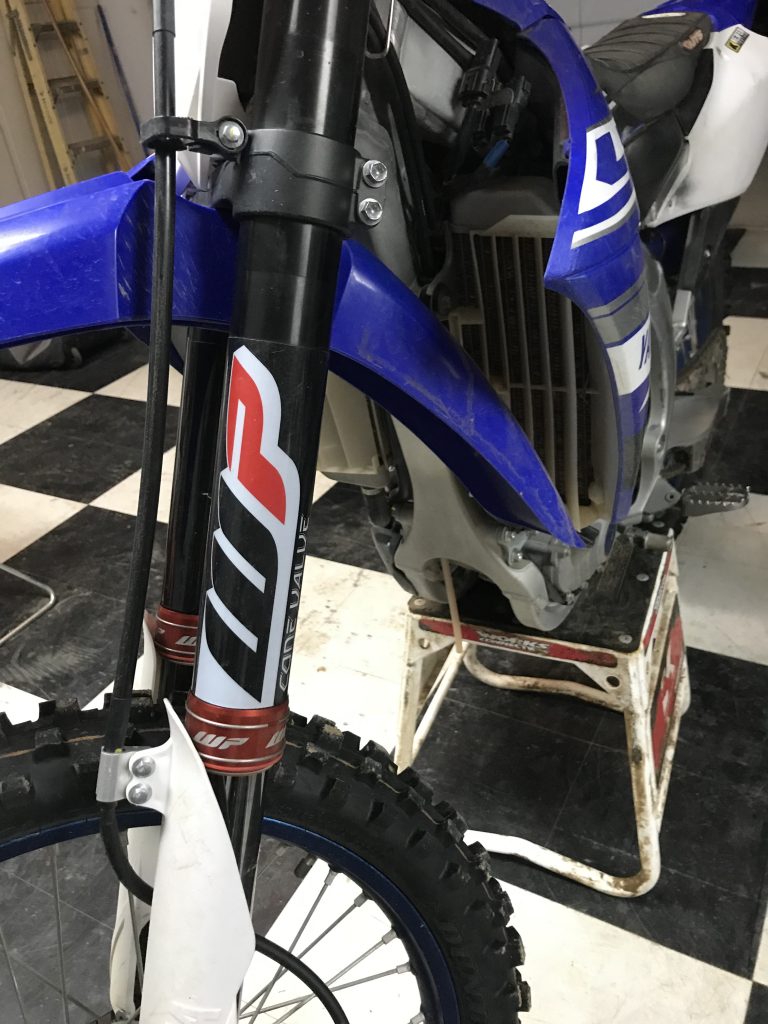 If I wanted to pound through the bumps, the CV fork had an adequate enough of damping control feeling through the middle to end part of the stroke. The CV fork didn’t have the bottoming resistance like the Enzo/KYB fork, but still had more bottoming resistance than the stock fork. The Cone Valve fork has a smooth action feel and I received less harshness through the middle part of the stroke than the Enzo/KYB fork. The only downside I can see from going to the CV fork is that it does make the front end feel slightly more rigid than that of either KYB set. Some less sensitive riders may not even notice this, but I did start to notice this after some time on the WP set compared to the KYB sets. You only can really feel this on slap down landings or super hard pack tracks. For an A-Kit type of fork this CV fork is definitely better than that of the stock fork and has slightly more comfort than that of the Enzo/KYB re-valved set. With the Enzo/KYB fork I could be more aggressive with more performance, but with slightly less comfort on small chop. The WP CV fork allows me to push the Yamaha harder around the track compared to the stock fork, but lets me ride smoother than the Enzo/KYB front end. For the cost of $4,250 this is a viable option or the consumer that wants an A-Kit fork for their Yamaha. 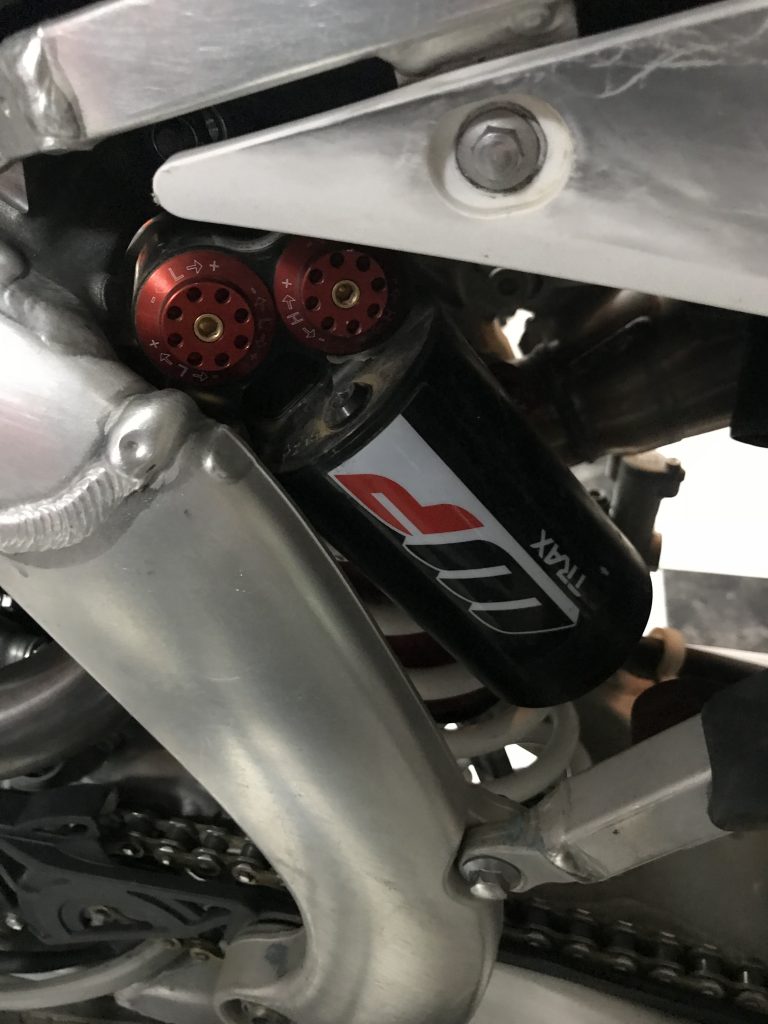 The WPTrax shock gave the rear of the Yamaha YZ450F a firmer feeling than the standard shock and felt lower in the rear than that of the Enzo/KYB shock. The firm feel didn’t translate into a harsh ride on acceleration bumps and to me the Trax shock actually had more comfort in that area than the other two shocks. Where the stock and Enzo/KYB shock can feel high at times, coming into corners, the WP Trax shock gives the balance of the Yamaha a lower to the ground feel. This feeling is nice because I never got a kick to the butt sensation on de-cel bumps, which gave me more confidence to accelerate through the first few braking bumps. The Trax shock provides you with as much high-speed damping as the Enzo/KYB shock and you still get more acceleration comfort than my Enzo/KYB setting. I also noticed a little more connectivity to the the rear wheel (when hard on the gas) on flat corners with the Trax shock, compared to the other two shocks. The rear of the YZ450F tracks straighter with the WP Trax shock on long rolling sweepers and doesn’t upset the chassis as much as the stock shock. “Balanced” is a great word to describe the Yamaha and it still remains that way with the Trax and CV suspension installed. I have the Trax system turned “off” for my setting as I felt like it had more of a dead feeling (which is a feeling that I like). Just in case you don’t know what a “dead feeling” is, it is where the bike can be pushed hard into braking bumps or square edge chop and will not move or react as quickly. With the Trax “on” the rear wheel does follow the ground slightly better out of choppy ruts/corners, but reacted too quickly when coming into large braking bumps (kicking) when entering corners. I would think the Trax system would benefit an off-road rider that needs his rear end to move and follow the ground more at higher speeds (think west coast off-road). I ran the sag a little higher at 103mm (rather than the standard 105mm) and this seemed to be the happy spot where the Yamaha felt most balanced. The Trax shock is very finicky to adjustments so make sure you only do very small one click increments as you will be able to feel each change you make. The Trax shock will cost you $2,320, which Is less that that of a KYB or Showa A-Kit shock. 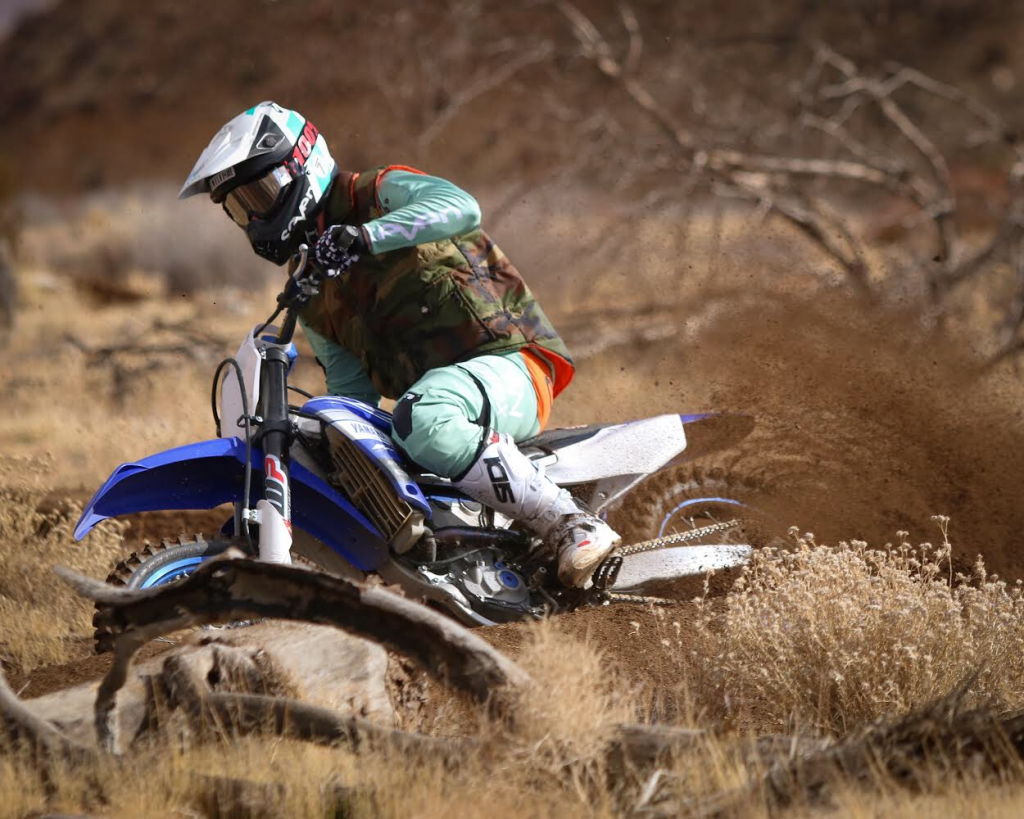 So you may be asking yourself, “where does this leave me in the realm of which set of suspension I would want on my 2019 Yamaha YZ450F”? The WP CV fork and Trax shock shouldn’t be overlooked if you want to go to an A-Kit type of set up. I have ridden with a lot of A-Kit suspension sets on the Yamaha and the WP should be considered into your final decision. It is tough to say which set of suspension is clearly better because it depends on rider preference and settings. A huge misconception is that you just buy a set of A-Kit suspension and it will be better than your stock stuff right away. That is so wrong! A-Kit is built for performance and usually has less comfort than that of your stock stuff. WP managed to weave both performance and comfort into their A-Kit suspension pretty well with the Cone Valve fork and Trax shock. Just because it’s “different” doesn’t make it not as good on the track than other more popular suspension set ups. You can head over to wp-group.com to check out all of WP’s products and services.