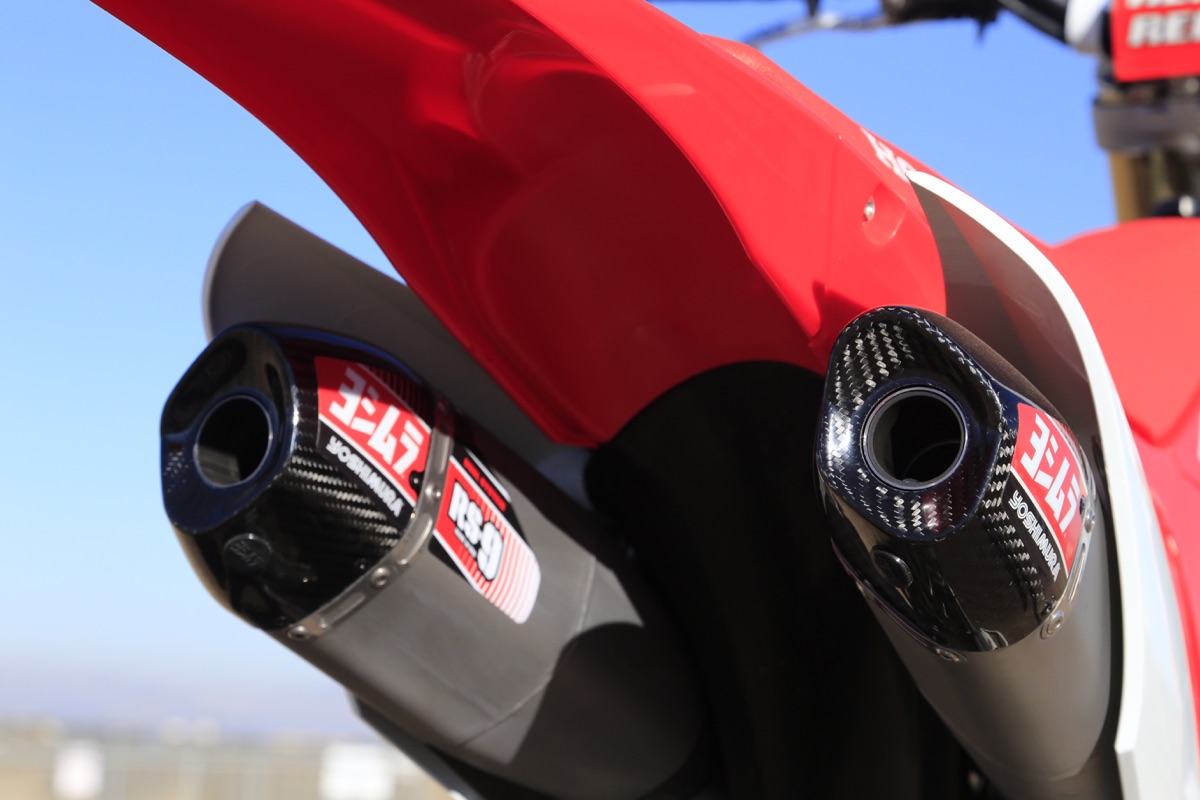 It’s no secret that the Honda CRF250R is still lacking some bottom to mid range power when compared to the other competitors in the 250 class in 2019. Seeing as how I’ve been logging some hours on this machine as of late, I decided to test the full Yoshimura RS-9T titanium system to see if we can get some added low end power. Installing the new full system took me less than 20 minutes and the instructions were very detailed. All of the parts that came inside the box fit perfectly and no curse words were thrown out in the garage while installing the Yoshimura exhaust. 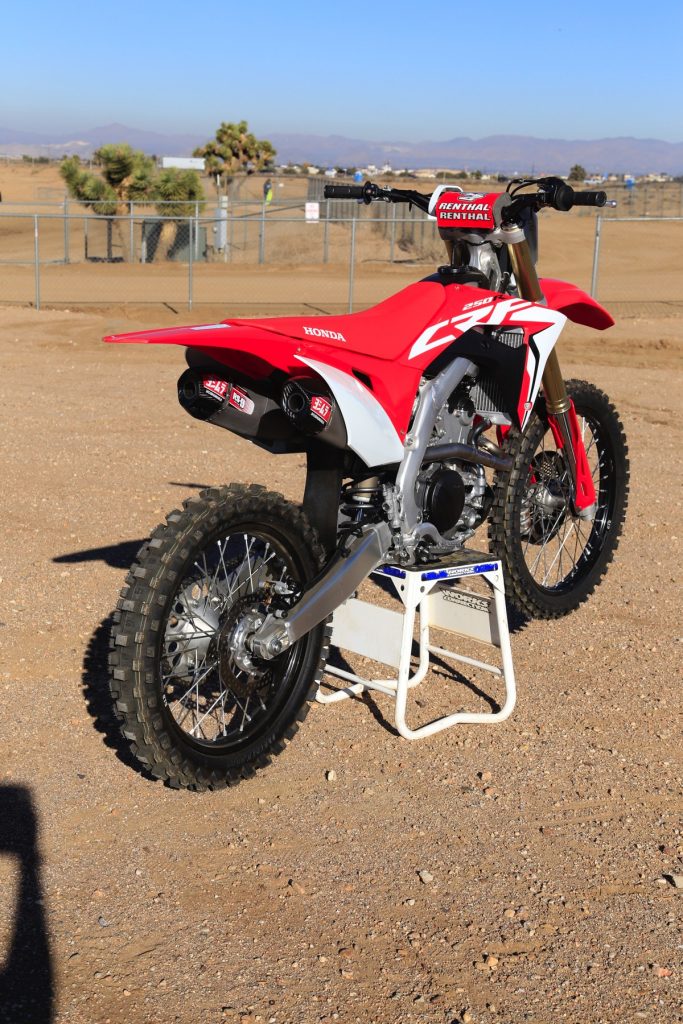 Now to the part that everyone wants to know. Does the Yoshimura help the 2019 CRF250R? The simple answer is yes, but who likes simple answers? Not me! With the stock system, the Honda pulls nicely from mid top end, but when exiting corners and trying to grunt up obstacles, the engine needed some assistance. The best way I can explain the stock feeling 2019 CRF250R is that it needs help on “recovery” when the rider makes a mistake. “Recovery” basically means how long it takes the engine to recover by getting in the meat of the power again. When you’re tired or lazy and miss a shift, this is where the Honda CRF250R gets smoked by the Yamaha YZ250F. I had to ride a gear lower at times in corners (with the stock CRF250R compared to other 2019 250F machines) and if I didn’t, it took a bit of clutch feathering and more coaxing to get the bike pulling hard again. If the track is flowy and fast the stock Honda works great, but when the track is tighter, this engine suffers.

As soon as I fired the bike up with the new exhaust it was clearly a bit louder, not obnoxious, but a nice throaty sound that was deeper. I tested the stock system back to back with the Yoshimura system on consecutive days, so it was interesting to see the places (at each track) where the bike really felt different. 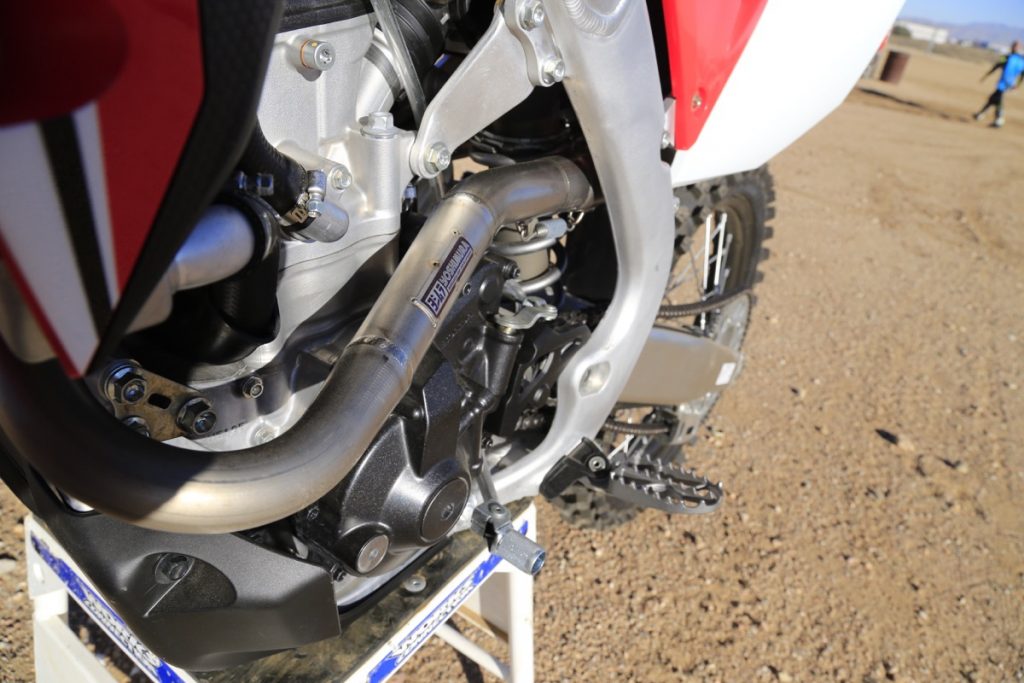 The most noticeable place the bike felt better was out of tight inside ruts that exited up jump faces. With the stock system I had to slightly slip the clutch all the way up the lip (to be able to clear the jump). When I bolted on the Yoshimura system I could leave it in second gear and just use the meat of the newfound bottom end power to pull me up and over those types of jumps. When I had to be in second gear and scream the bike (with the stock system), I could now be in third gear and use the smoother/stronger part of the power to exit the turn with the Yoshimura muffler system. RPM response was improved as well and this made the Honda feel even lighter when popping out of corners. Connectivity to the rear wheel was improved and even with that extra RPM response I gained with the Yosh system, I received more rear wheel traction. From mid to top end I only noticed a sightly better pulling power down each straight with slightly more over-rev. This part of the muffler wasn’t mind blowing, but took me a couple tracks to figure out that there was a little extra “meat” through the mid range (compared to stock). Overall the little Honda just has a little more RPM response, better pulling power through second and third gears, and a small gain when revving the bike out in each gear. 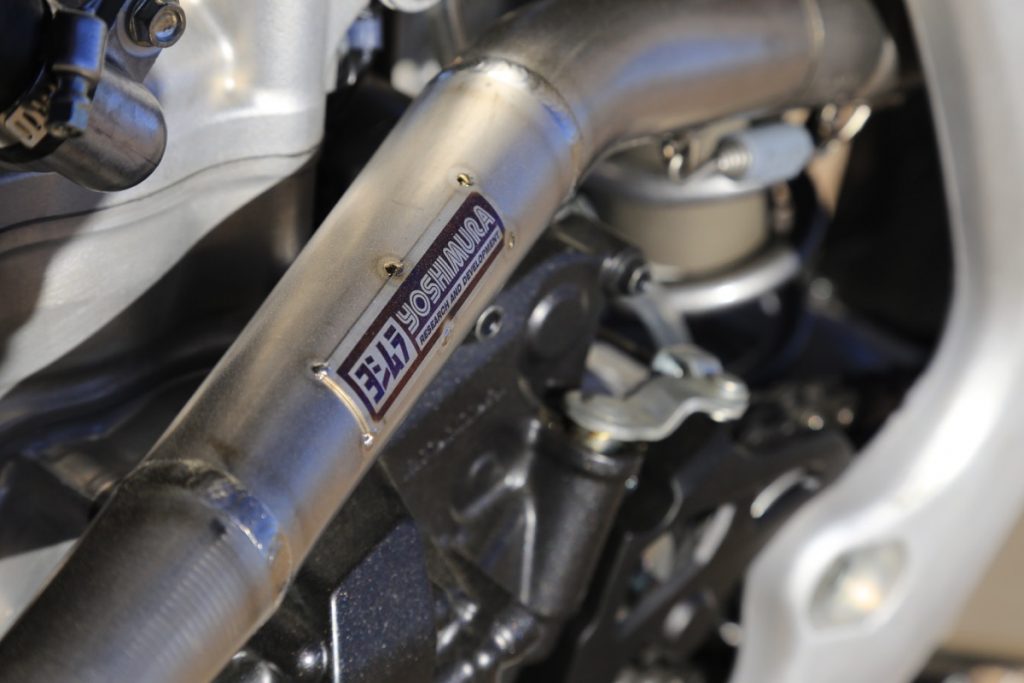 This doesn’t mean that your new Honda CRF250R (with the Yoshimura exhaust) is going to be a YZ250F killer, but it closes the gap a little. If you have a 2019 Honda CRF250R and feel like you’d like a bit more bottom-mid range power I’d definitely look into the RS-9T system. There are three types of Yoshimura mufflers that you can choose from; a slip on muffler system ($763.15), the full stainless system ($947.36), and the full titanium system ($1463.15). Admittedly none of these are super inexpensive options, but it’s one of the few things in today’s four-stroke world that provides a true bolt on benefit. Besides, if you were looking to save a few bucks, I don’t think you would be rocking a new 2019 Honda CRF250R right now anyway.