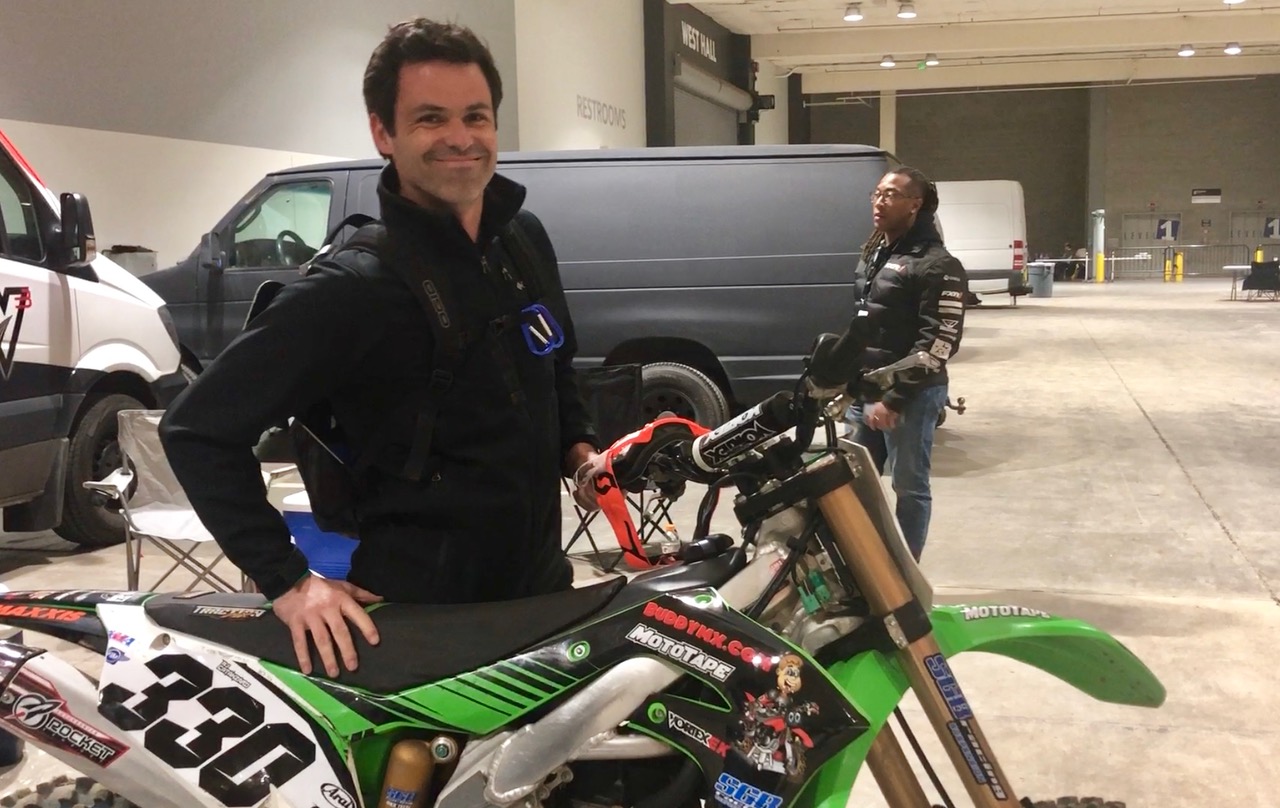 Experience and Words By: Jesse Smith

With only a few minutes to spare, I threw on a tool-laden backpack, grabbed a pit board and laced my arm through a helmet. With a pristine pair of goggles perched on the handlebars, I threw a leg over the #330 Kawasaki and sped along the outside of CenturyLink field where AJ Catanzaro waited for his machine. Earlier that day I was just your average Supercross fan. Now, I was lining a motorcycle up on the start gate at a professional Supercross race.

This all started a few months earlier when a call for interns came across my Instagram feed. A group called The Collective Experience was teaming up with pro rider AJ Catanzaro to offer fans a chance to work for a rider and gain experience in the industry. The opportunity appealed to me immediately, driven mostly by my life-long love of this sport. I was also genuinely curious to know what it was like on the ground floor of a professional race. This was an opportunity I could not pass up. 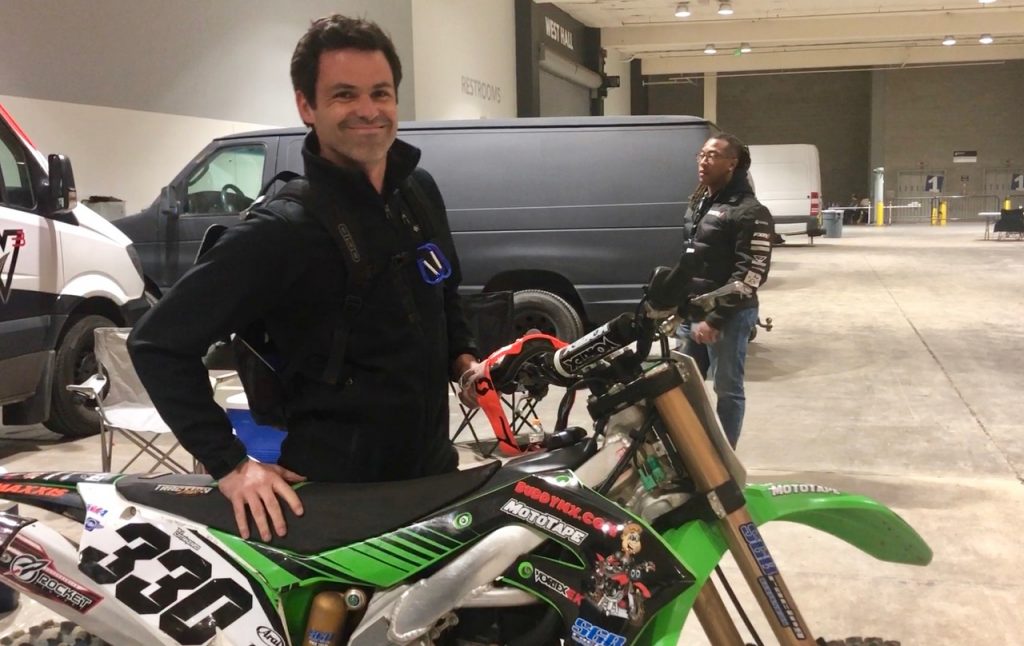 Though I could imagine any number of incredible possibilities for that day, my practical side assured me that I’d likely be doled out menial tasks like cleaning boots or handing out stickers. While I hoped I’d get the chance to spend time on the track and close to riders, I was prepared for this outcome and excited to get whatever exposure I could.

Arriving early to Century Link field, I watched as the pits awoke with the hustle of team support workers. Marveling that for these people, today is just another day at the job. Soon, I met up with AJ and his crew and we made our way to their pit location. After introducing myself, AJ looked at me and said, “How mechanically inclined are you?” After a pause, I replied that I could handle basic maintenance, but with larger tasks I was out of my depth. He replied, “I don’t have a mechanic today, so we’ll figure it out.”

This last statement slowly sunk in. I was going to act as his mechanic for this race. Luckily, I had been a fan of this sport long enough to know roughly what a Supercross mechanic does. I had seen the famous team mechanics like Dan Betley and Carlos Rivera go through the motions to prepare their riders for each race. I had a conceptual idea of what my duties might be, but that was the extent of it. Beyond that, I had exactly zero practical experience as a mechanic. This was going to be an interesting day!

The morning began with track walk, a ritual of race day where riders and their mechanics converge on the track in its virgin state to size up the layout and develop race strategy. As we neared the end of the start straight, AJ looked from left to right and with a confused look on his face finally said, “Where is the first turn?” I was thinking the same thing as I tried to make sense of the unconventional layout of this Seattle course. As we finally made our way down the first straight, AJ exclaimed, “Not a good start to track walk.” 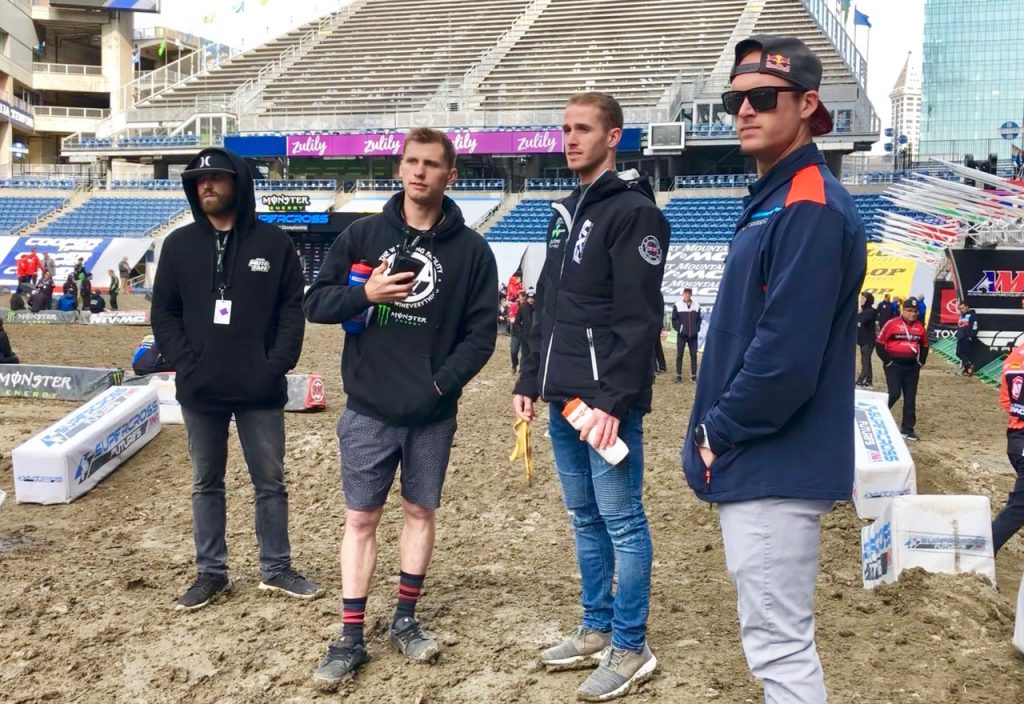 Once track walk was through, we retired to the pits. AJ and I went over the bike. He pointed out settings he wanted adjusted, and things he wanted inspected prior to going out. Soon we were heading out on track for his first qualifying session. AJ’s results from the previous round had him qualifying in the A-group alongside the biggest names in the sport. After a short meeting with AJ, I was clear on my duties. I was to record lap times and position on the pit board, and keep an eye out for him coming in to the pits. It is hard to express how quickly the ten minutes allotted for this first session went by. I frantically juggled live timing on my phone in one hand, and a pen and pit board in the other. The finish line in this round was positioned fifty yards ahead of the mechanics area, so recording and relaying times on the pit board was a real challenge. Likewise, the mechanic’s area during qualifying is intense. Riders dash in with little notice to make rapid adjustments before returning to the course. It was a challenge to stay focused on AJ and his lap times, while trying to avoid the erratic movements of other riders and mechanics. 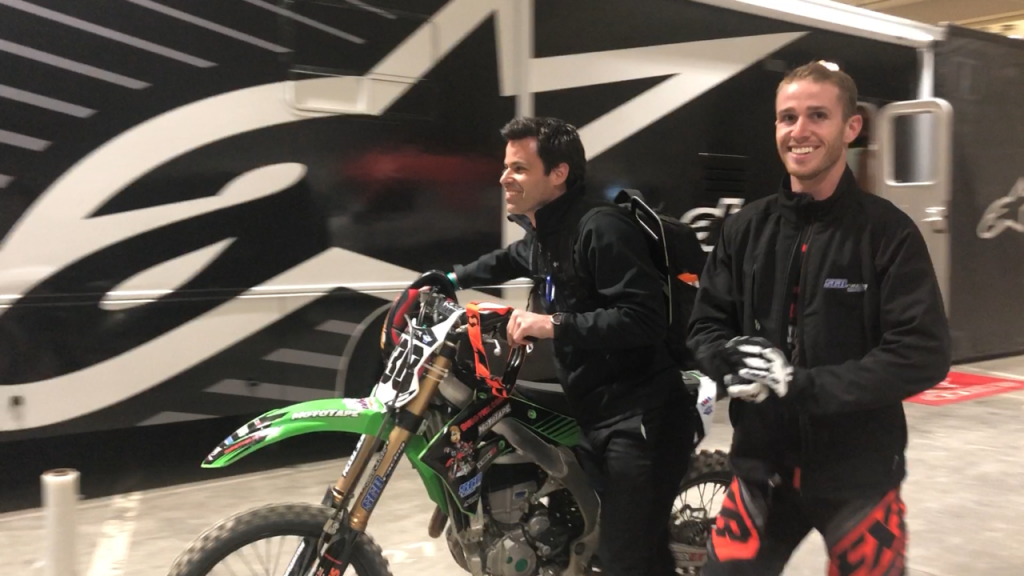 AJ and Jesse heading out for the heat race #2

As qualifying ended, AJ pulled off the course and rode up alongside me. Without looking at me, he stopped and slid forward on his seat, the universal sign for “hop on!” Having seen mechanics jump on the back of bikes for a ride back to the pits, I knew exactly what I was supposed to do.

“Did you put anything on the bike?” He yelled back to me as we rode back to the pits

“It was so slippery, I had to stop and rub dirt on it!” he said. 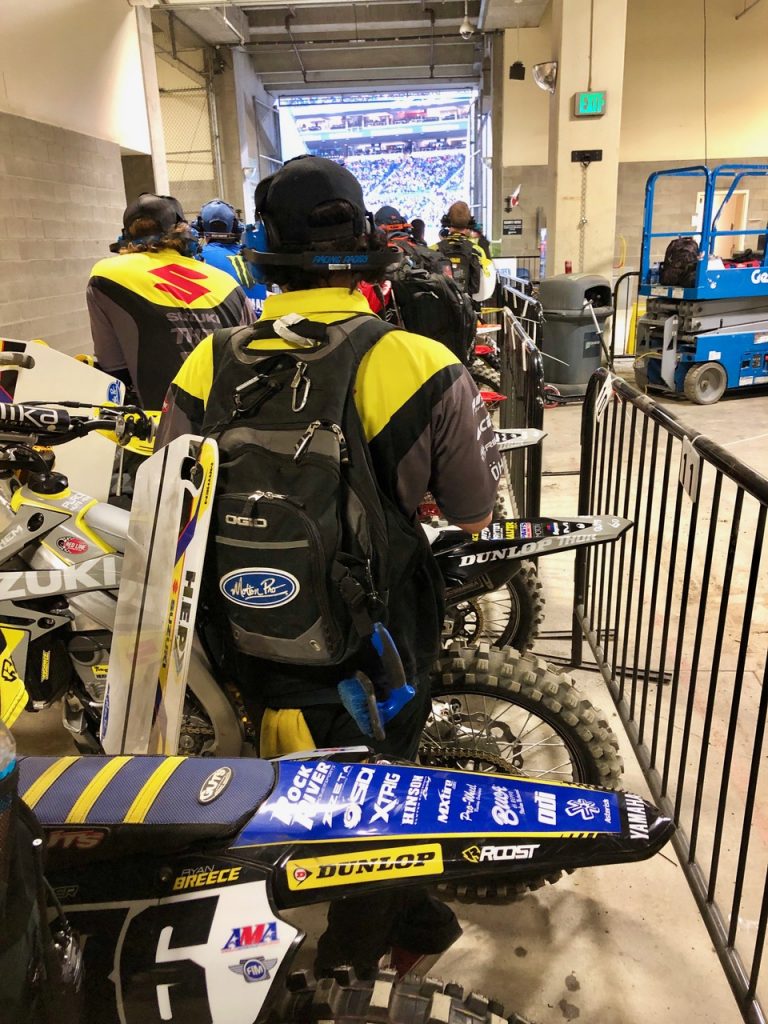 After thinking about it my heart sank. I knew exactly what had happened. A few minutes before qualifying as I was readying AJs goggles, another fan joining us for a “fan experience” asked if he could shine AJ’s number plates. I said he could, but failed to realize he would also try to shine the side plates, thus coating the exact surface riders use to grip the bike with a Teflon-like coating. I sent AJ on track with a shiny, slippery motorcycle. This was my first failure as a mechanic.

After that, I was on high alert, doing my best to not let anything else go wrong. While AJ rested and ate lunch, I inspected the bike. After cleaning all the plastics with brake cleaner, I went over the checklist to ready the bike for the first heat races. During this downtime, I was interested to see how AJ prepares for races. AJ is clearly a well-respected member of the Supercross fraternity as rider and team personnel alike strode by to chat with him. As a professional athlete goes, AJ is remarkably easy going during these days. Whether it is his nature, or just the years of experience, he seemed to take the entire day in stride. Contrasted with my experience as an amateur racer, I can only recall the sickening butterflies and restless anxious energy that preceded any race. 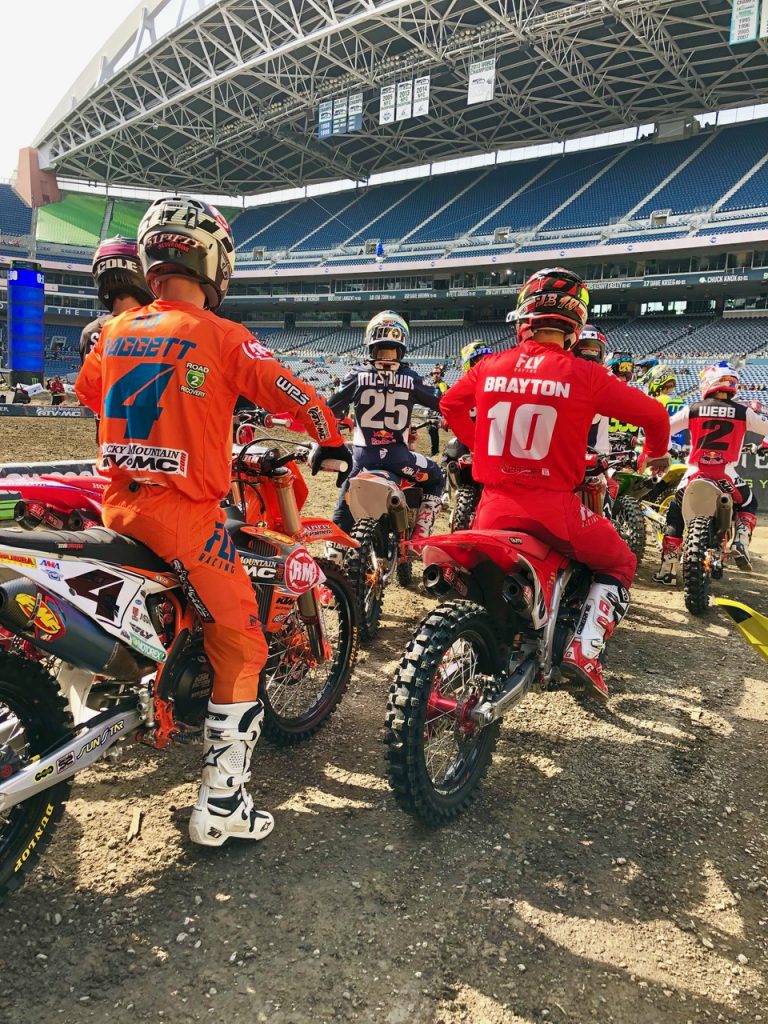 450A group lined up for qualifying

Soon, I found myself lining up in the tunnel that leads to CenturyLink field. Around me were other mechanics holding their rider’s machines. Through the tunnel I could hear the announcer and the intermittent cheers of the fans coming at me from one direction as the sound echoed through the narrow tunnel. As the first heat race concluded, we began to inch forward, and in doing so the sound of the crowd enveloped me. An AMA official waved me forward and I walked forward toward the starting gate where AJ waited at his gate. Starting the bike and giving it a few revs to warm it up, I listened and felt the vibration of the engine. As cliché as it sounds, the noise of the crowd and the announcers faded into the background. As I neared the gate, I positioned the bike at AJ’s gate right next to Eli Tomac. I noticed that every inch of Eli’s bike was pristine and new. The subtle scratches on AJ’s bike and gear highlighted the vast difference between factory and privateer riders. Once I positioned the bike, I took a rag and cleared the gate of any dirt, helped set the holeshot device and took up position on the throttle side of the bike. I gazed through AJ’s goggles, inverted them to shake any debris clear and handed them to him. As the 30-second board went up, I patted AJ’s back with a word of encouragement and retreated to the side of the start gate with the other mechanics. The drop of the gate, and the roar of racers passing past is followed by another synchronized, much slower race; that of the mechanics rushing to the mechanic’s area. 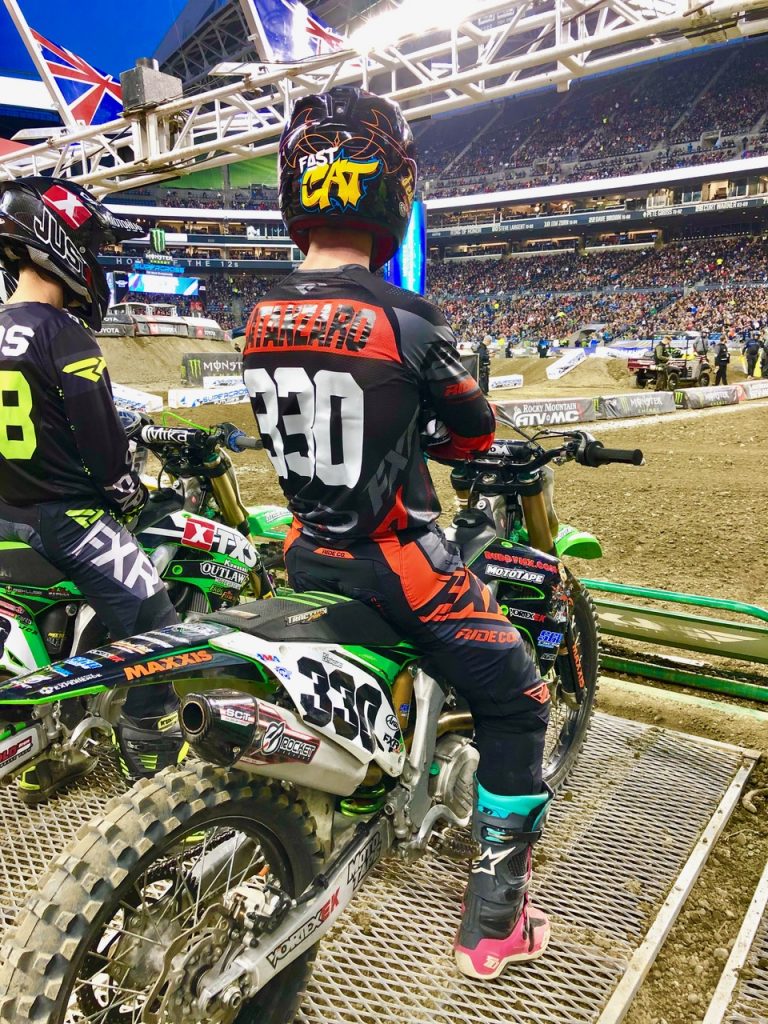 The progress of the race went by, much like qualifying, in a blur. As riders finished the first lap, I felt into position behind Oscar Wirdeman and Carlos Rivera. In the brief calm as the race proceeded on the far end of the course, I took a moment to see the crowd from this standpoint, to take in the sights and sounds that until now I had only experienced from the stands, or on TV. I heard the engine sounds ebb and flow in the distance. I heard the announcers and saw rider positions begin to display on the timing screen. As the race leaders finished their first lap, I saw Oscar and Carlos relay their messages to their riders. As they retracted their pit boards, I stepped forward and dropped the board over the padded fence, with AJ’s position written on it and held it out for him to see. As AJ navigated the sand whoop section that preceded the mechanics area, I saw him effortlessly go from standing to seated position as he approached the next turn. In doing so, I clearly saw AJ’s eyes divert from his turn line and fix their gaze on the pit board to see the message I had scrolled on it. In the same moment he returned his gaze to the turn, slid elegantly into the 180-degree turn, ripped open the throttle and accelerated out of the outside line leaving only the falling remnants of the roost from off his rear tire in his wake. 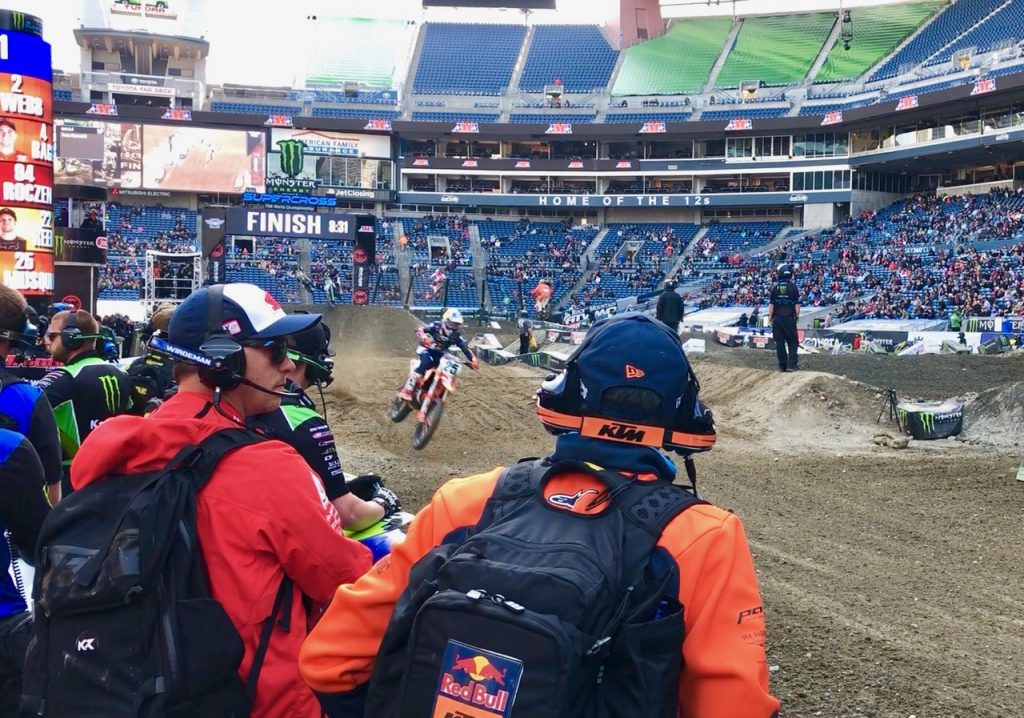 Taking my place amongst the legends of Supercross mechanics.

As the race came to and end, AJ rode up to me and handed over this Kawasaki, opting to stay on course until the last chance qualifier. I pushed the bike through the tunnel that exited the field past another crowd of riders awaiting their race. Once outside, I jumped on, started the bike and rode away. Speeding quickly away from the stadium and toward the pits, the noise smell of the race faded quickly and the reality of that night set in. Earlier that day I was just a Supercross fan and now, for at least this day, I was a mechanic at a professional Supercross race… and my rider was waiting for me. 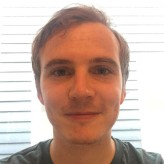