New feature: This week I dive into the sand section segment times. Check it out below for each class.

The first race of the East Coast swing is complete and the 450 championship has begun to cement as a 3 horse race. Eli Tomac, Ken Roczen, and Cooper Webb are showing they are ready to battle week in, week out. Maybe most important tonight was that Eli Tomac got his 3rd win of the season. Since 2000, 80% of the riders that are first to their 3rd win go on to win the championship. While the stat drops to 70% when you go back to 1977, the odds are in favor of Eli Tomac taking the crown.

What I found most interesting in tonight’s stats is that Eli Tomac was top 3 rounding the first turn every single time he was on the track. He was upfront on the practice holeshots, the heat race, and same for the main event. I’ve repeatedly highlighted that Eli has the highest position change in the 450 class and its resulted in him having to constantly work through the pack. In Tampa, Eli’s position change stat was +2. Tied for his season low in Oakland which was also where he last won. In 2018, Eli won 9 main events on the back of 8 main event holeshots. On the podium, Eli mentioned they are constantly working to improve and my spidey sense can’t help but wonder if they found something to help with starts…

As always, drop me a line on Twitter or Instagram @3lapsdown with any questions or just to bench race. Hope you enjoy the analysis.

STAT OF THE RACE
19 = the number of laps led by Shane McElrath. While Jordon Smith was credited with the holeshot, Shane made quick work in the first rhythm section and went on to win wire-to-wire. Looking at the Race Stats, Shane had an almost perfect night, qualifying 2nd, won his heat race, 1st gate pick, led all laps, and took the win. He looked good. Really good.

ROOKIE DEBUT
Jo Shimoda of the GEICO Honda team made his supercross debut in Tampa and had a solid night. He finished 5th in his heat race after a great start and race long battle with veteran Josh Hill. He then got another great start in the main event and although he dropped -5 positions, he still finished 10th place. The future is looking bright under the GEICO tent with Jo alongside fellow rookie Jett Lawrence.

SAND SEGMENT RANK :: AVG TIME
Not entirely surprising, Shane McElrath was the fastest through the sand section. Maybe more interesting is that early title favorites Jordon Smith and Jeremy Martin lost an average of 0.52 and 0.44 seconds a lap in the sand segment. What’s more interesting is there’s no sand in the remaining east coast rounds which means we’re likely to see a bit closer racing amongst these riders. 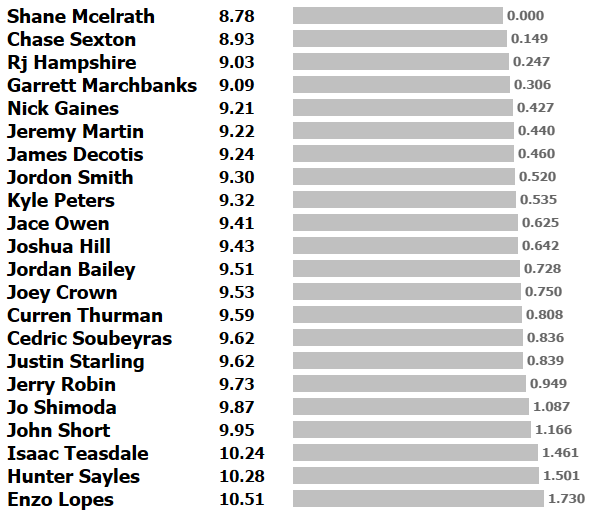 WEEK 7 SHAKER & STUDS, FADERS & DUDS
Disclaimer: I’ve a ton of respect for everyone on the entry list. The Fader and Dud awards are tough to hand out, but the numbers are the numbers and they tell a story. Don’t shoot the messenger.

STUD
Garrett Marchbanks, Monster Energy Pro Circuit Kawasaki. Coming into the series, Garrett seemed to be overshadowed by the arrival of new teammate Jordon Smith. But after rounding the first lap in 11th position, Garrett had a +7 position change and finished in 4th place, one spot ahead of his teammate.

FADER
John Short of the Manluk Racing dropped -7 positions. Not sure if this was due to a crash though. Anyone got more info!?

STAT OF THE RACE
+2 = Position Changes for Eli Tomac. For a guy that now has a season leading +35 (Webb +16, Roczen +6), this is a refreshing change. Good starts aren’t everything, as he demonstrated at round 3 in Anaheim, but they make it a lot easier.

TICKLEBACK
What a return for Broc Tickle. He rounded the first lap in 10th place and finished a respectable 12th after a 2 year hiatus from the sport. He just proved very worthy of the JGRMX Suzuki spot and this adds yet another talented rider into the mix for the remainder of the season.

SAND SEGMENT RANK :: AVG TIME
The top 4 through the sand segment are not surprising in the least, but looking down the list, Aaron Plessinger presumably used his height to nab 6th an Kyle Chisholm used his sand experience to grab 9th fastest. But most surprising to me was Justin Barcia ranked 18th and lost 0.827 per lap in the sand (did he crash here?). 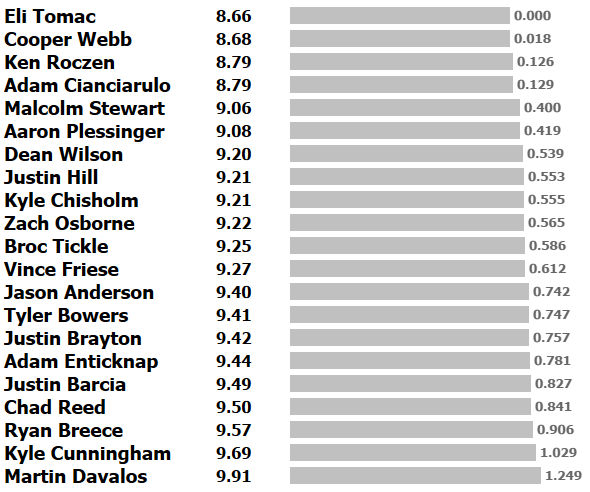 WEEK 7 SHAKER & STUDS, FADERS & DUDS
Disclaimer: I’ve a ton of respect for everyone on the entry list. The Fader and Dud awards are tough to hand out, but the numbers are the numbers and they tell a story. Don’t shoot the messenger.

SHAKER
Justin Barcia, Monster Energy Yamaha. He rounded the first lap in a horrendous 14th position. In his patented never give up style, Justin fought back the entire main event to finish 4th place. It was impressive to see him make the last 3 passes in the waning laps as other riders faded.

STUD
Justin Hill, Smartop Motoconcepts Bullfrog Spas Honda. Don’t look now but Justin Hill is started to string entire main events together. Justin has a -3 Race +/- (moved backward in 5 races, forward in 2), but that’s a 0 Race +/- in the last 4 rounds. This is a great story in the making for Justin.

FADER
Vince Friese and Malcolm Stewart, Smartop Motoconcepts Bullfrog Spas Honda. Malcolm clearly has podium speed but has to build the endurance to run the pace a full 20 minutes. Vince clearly has holeshots on lock but not the pace of the leaders with a relative consistent 13-15th place finish week in, week out.