Southwick is known for local legends giving the best factory riders in the world a run for their money. By my count, there’s been over 140 local New England riders that have raced the Southwick National going back to 1976, but this count will be a bit low because we’re missing 25-40th place results from the 1980’s and 1990’s. No question though, John Dowd and Doug Henry rise to the top of any conversation when we’re talking about the best New England rider at Southwick. But who’s better?!

Here’s the 20 riders from New England that have finished inside the Top 10 of a moto at the Southwick national. Of those 20 riders, only 2 have won it (Dowd and Henry) and 5 have stood on the overall podium. Notable to mention that JoJo Keller is the only other New Englander besides Dowd and Henry to win a moto at the Southwick national. In 1980, he went 3-1 for 2nd overall behind Kent Howerton. He also won the second moto in 1982 but unfortunately DNF’d the first moto. 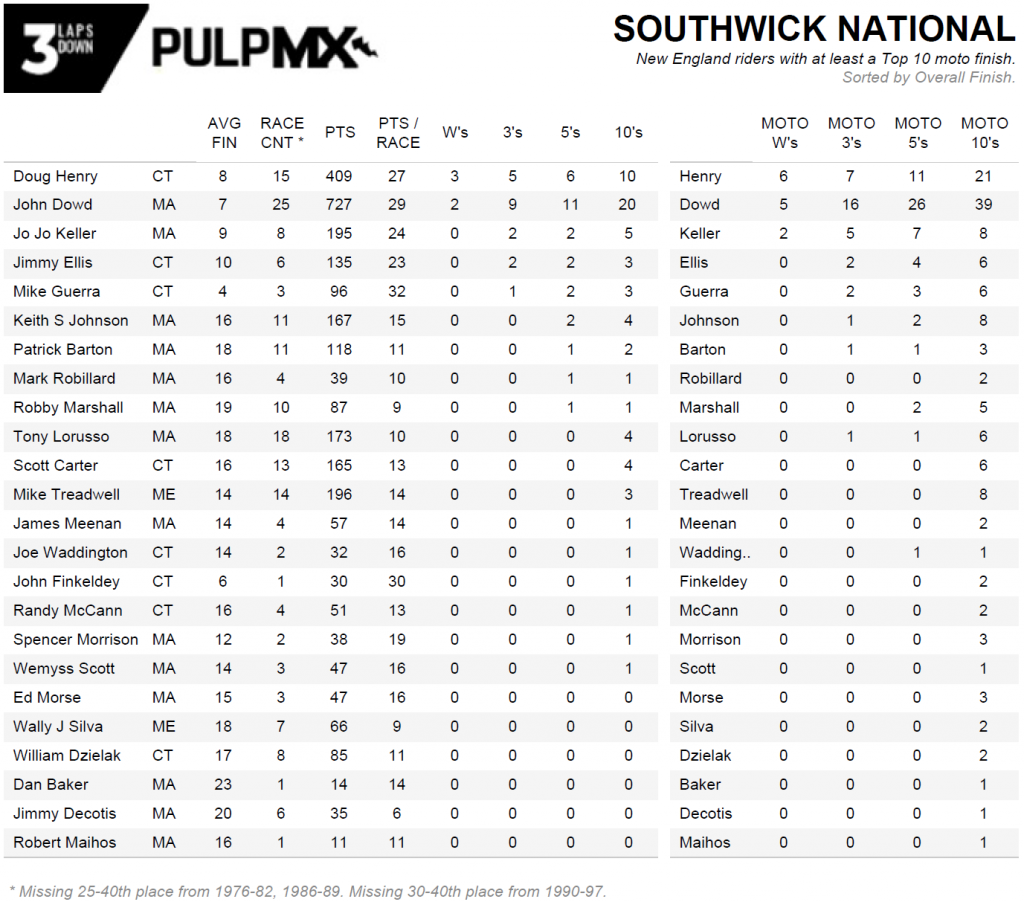 Riders like Keith Johnson, Pat Barton, Robby Marshall, Mike Guerra, et al have put in some incredible rides over the years. From Top 5 overalls to podium moto finishes, these local legends have beat the best in the world. But it’s John Dowd and Doug Henry that are a notch better. These two riders won championships, supercross main events, and multiple pro motocross overalls and motos. The question is…

I texted a few of the local New England legends and asked them “Who would you vote as the better Southwick National rider – Dowd or Henry?”.

Ricky Zielfelder, owner of Factory Connection and the old GEICO Honda team, immediately responded with “You can’t do that! Love em both!”. Similarly, Keith Johnson said “That’s like asking who my favorite child is”. As I reached out to more local legends, there was one common theme – it wasn’t easy to pick who’s better at Southwick. With a bit of persistence on my part, each selected one rider but not without hesitation.

JoJo Keller went for Henry based on more overall wins after we poured through some stats. Mike Treadwell gave the nod to Henry for his national races but Dowdy for national+local races. Pat Barton went with Dowd after praising Henry and Tony Lorusso went with Dowd based on his longevity. I’m sure if I asked the question again and gave more stats, each may switch their answer simply because it’s not an easy question.

But what DO the stats say!? Who’s better at the Southwick national – Dowd or Henry!?

After wins, the comparisons get a bit tougher because John Dowd raced 25 of the 40 Southwick nationals compared to Henry’s 15 times. Dowd made the best of those 25 races and has scored the most points (727) in Southwick national history vs. Henry (409) who’s ranked 5th. Interesting to see that Mike Larocco (540), Ricky Carmichael (504), and Tim Ferry (437) have scored more points than Henry at Southwick.

Given the differences in number of times Dowd and Henry have raced the Southwick national, average/points per race is a better comparison. Dowd (29 pts/race) edges Henry (27 pts/race) by 2 pts. Dowd also averaged a 7th place finish vs. Henry’s 8th place at Southwick, just a smidge better. What’s particularly impressive is that Dowd raced the national well into his 40’s and that average didn’t drop much. 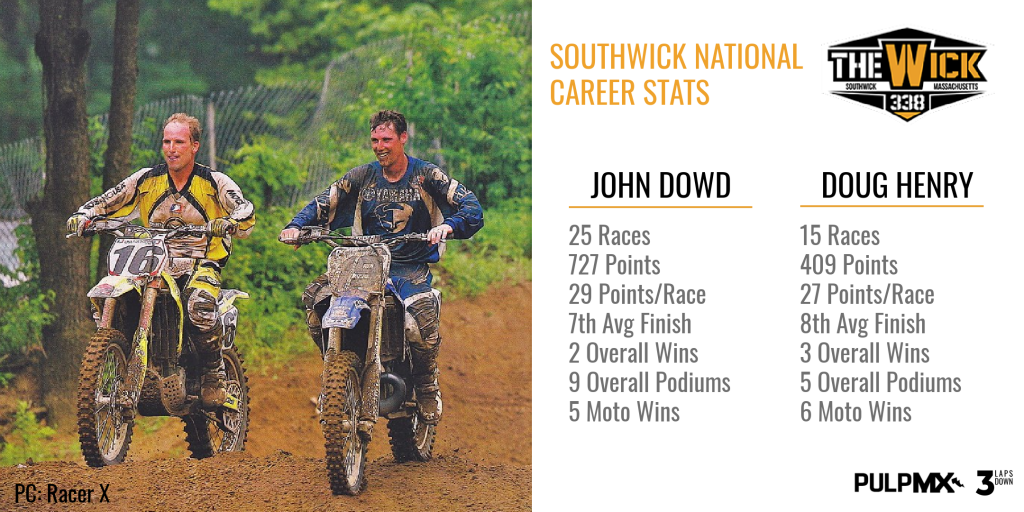 Another good comparison is head-to-head Southwick results. They faced each other 6 times and Dowd won 6 of 6 times. In their head-to-head races, Dowd went 2-2-6-2-3-6 and Henry went 7-8-7-14-5-17. Dowd has the advantage here. Making their lives difficult was Ricky Carmichael who raced them in 5 of those 6 head-to-head races. Also particularly impressive for Dowd who finished 2-6-2-3-6 against Carmichael at Southwick.

Summarizing, it’s Doug Henry that has the wins, but John Dowd has the better results on average and head-to-head matchups. No wonder the local legends struggled to choose a ‘side’. But there’s likely one race that tips the scales in favor of John Dowd. Back in 1998, Dowdy straight up beat Ricky Carmichael in the second moto to take one of his two overall wins. There’s only a few riders that have beaten Ricky Carmichael and to do so at Southwick where Carmichael won 10 of 11 overalls is something special.

Regardless who you think is better at Southwick, both John Dowd and Doug Henry epitomize the New England work ethic. As Rick Zielfelder said, “they would both ingest a pound of grainy said to win motos!”. It’s this “grit” that makes both of them Southwick legends.

So who do you think is better at the Southwick national – John Dowd or Doug Henry? Hit me up on Instagram or Twitter @3lapsdown and let me know what you think.