The media hasn’t been to a fly away introduction since pre pandemic times, so it was nice that Honda invited all of the media to Mt. View motocross park in Sandy, Oregon to try out their new 2022 CRF250R. I mentioned in Racerhead last week that there is always one bike that is the most anticipated of each model year release and this year it was the new CRF250R. Honda made significant changes to the CRF250R’s engine, chassis, a weight loss program, as well as suspension settings, but changing a bunch of things doesn’t always mean that it’s better right? Instead of flying out there for a couple days, I decided to make a road trip out of it and bring my son as well as a couple friends for a few days to enjoy the cooler temps of the PNW. Getting to ride in the Pacific Northwest in the summer is much better than riding in the Southern California inferno. so thank you Honda for getting us out of Hell’s Kitchen! Here are ten things you need to know after riding the CRF250R up in the pines of Oregon. 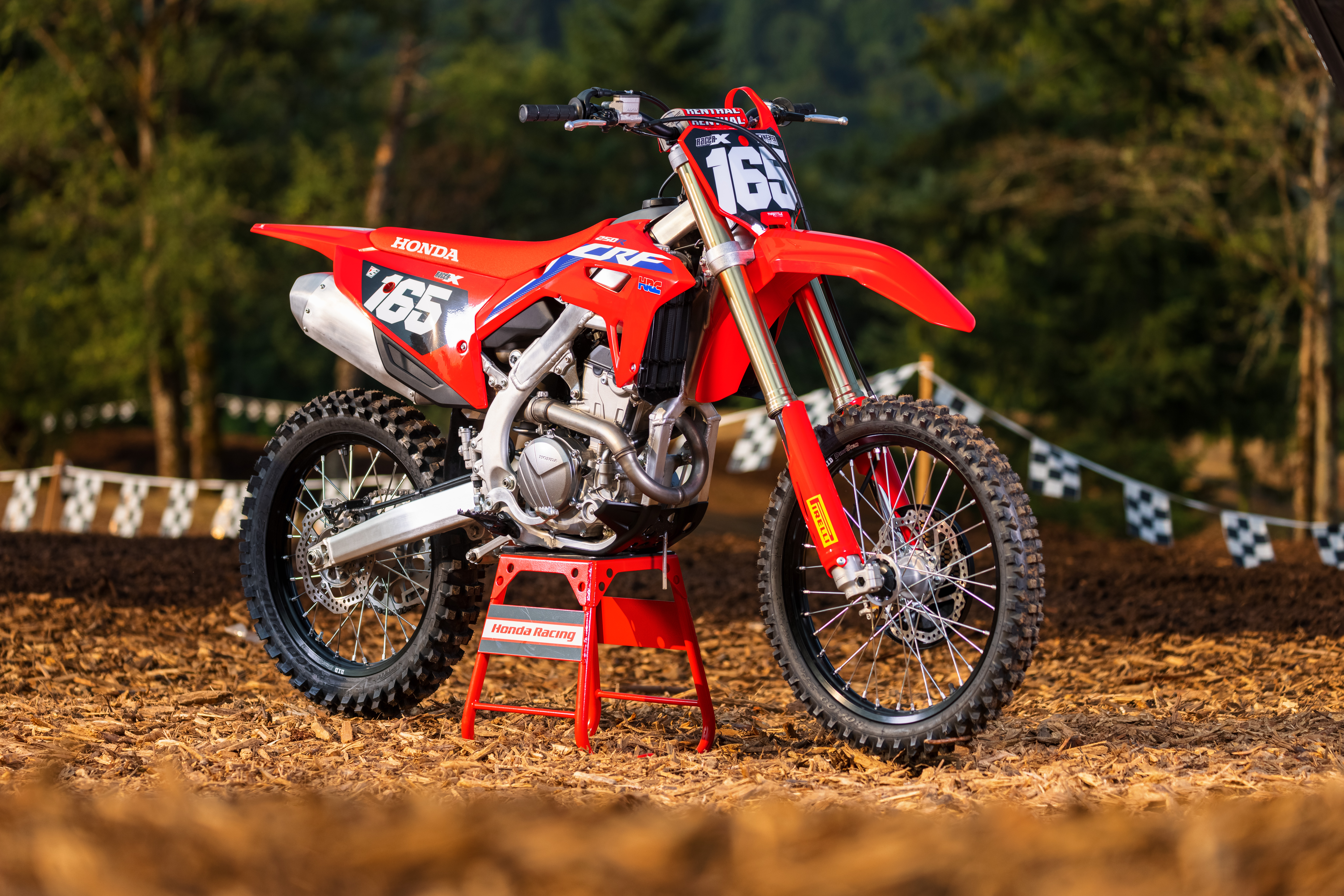 Engine: The 2022 Honda has more bottom to mid range torque than the 2021, which makes it a much more friendlier vet 250F machine. I am a huge proponent of using third gear in corners and that is one of the reasons why I love the Yamaha YZ250F so much. The Honda is not quite on par with the Yamaha down low, but it is much closer than before. The CRF250R has an exciting low to mid rpm response and pulls far through the top end. It almost has as much top end/over-rev of a KTM 250 SX-F, yet pulls harder down low than the orange bike. If the Yamaha and KTM had a baby, the Honda CRF250R would be born. Its power is a blend of both machines and much more fun to ride than previous red models. The Honda also has more of a free revving feel to it (similar to a KTM) and is easier to get back into the meat of the power, if you make a mistake. If you were to ask me if it’s better than a YZ250F, I would have to say no and yes. No, in the fact of as much torque as a Yamaha, but it is better through mid-top! 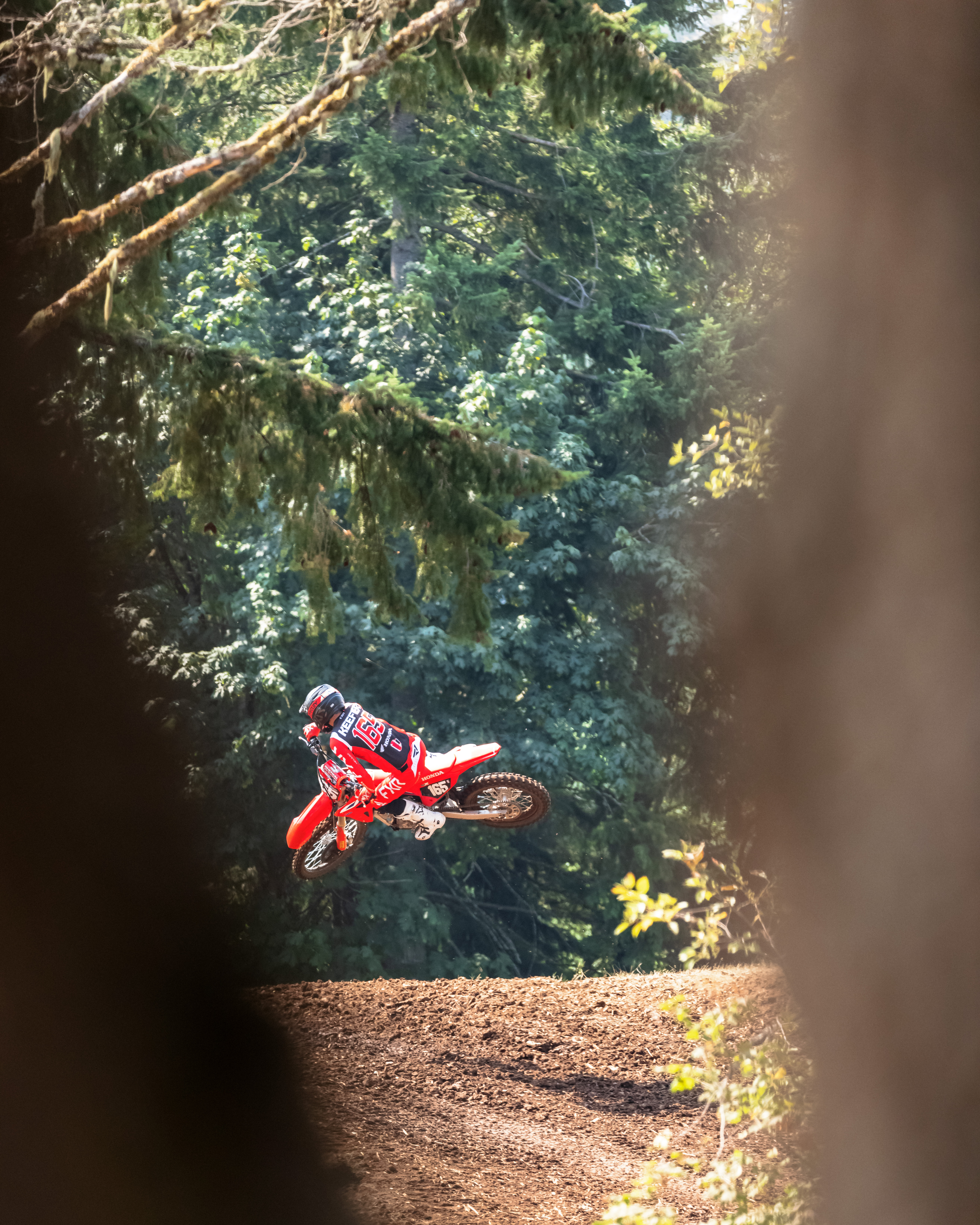 Chassis: We all know Honda has one of the best cornering chassis’ out there, but it wouldn’t hurt to get some added compliance and straight line stability from the Honda right? The 2022 gives you a little more of a forgiving feel on throttle while leaning. Think of a time where you need to go wide into a corner and then start angling back to get to the inside. This is where this updated 2022 chassis is better than previous years. I get some added contact feeling on lean angle that I didn’t have with the older chassis, which I find important if you want to keep momentum on a smaller cc’d bike. 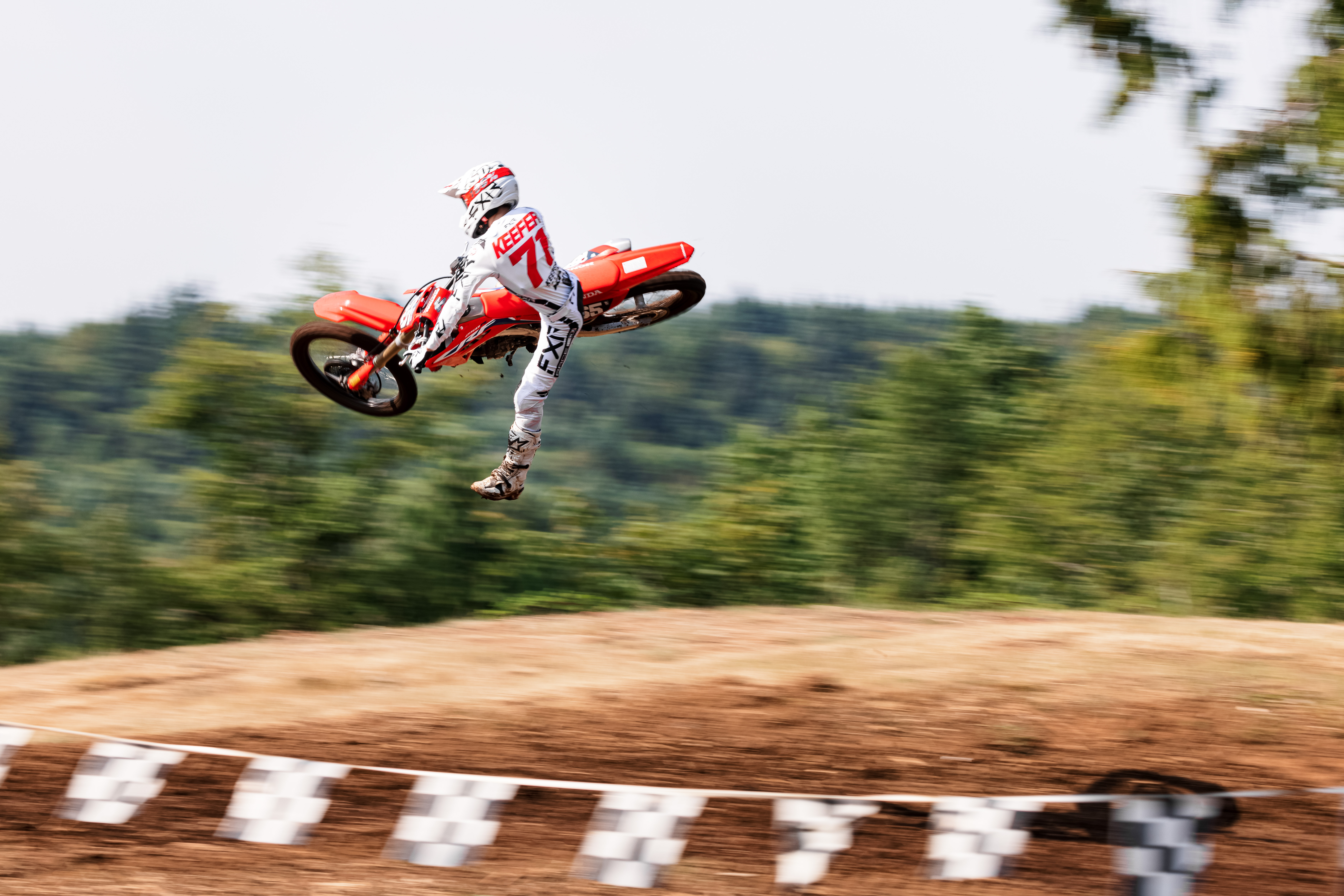 Suspension: With the added power and lighter weight the suspension has been revised and to me has slightly more comfort, but that could be some of the newfound chassis comfort talking as well. Even though the Mt. View track wasn’t the best to test suspension on, but I did manage to get a feel of what we think could be a setting to leans toward. The front end wasn’t as soft as I expected it to be for my weight (170), but I did go two clicks stiffer on the fork and this helped keep the front end from diving too much on de-cel. This only worked if I dropped the sag setting to 107mm and turned in the high speed compression in a 1/4 turn. After these adjustments were made the balance of the motorcycle was much improved and the CRF250R settled into corners even better. 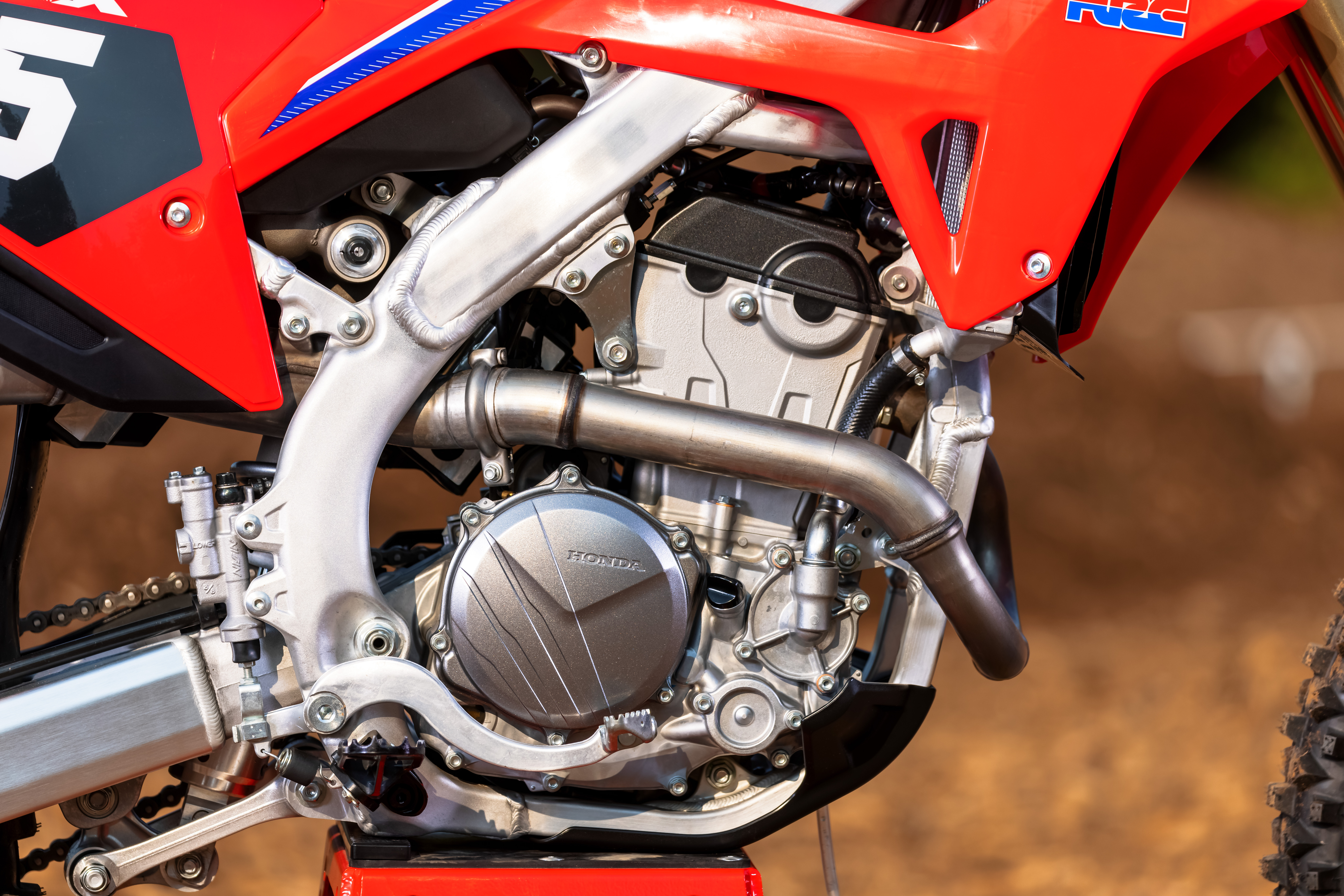 Cooling: The thicker water pump propeller as well as the new radiator louvers cool down the unit much better than the 2021 bike! Not once did I see coolant puking out of any test bikes during the time I was at the introduction. I couldn’t have said that in previous years. We will take the CRF250R to some sand tracks once we get our hands on ours back at home. 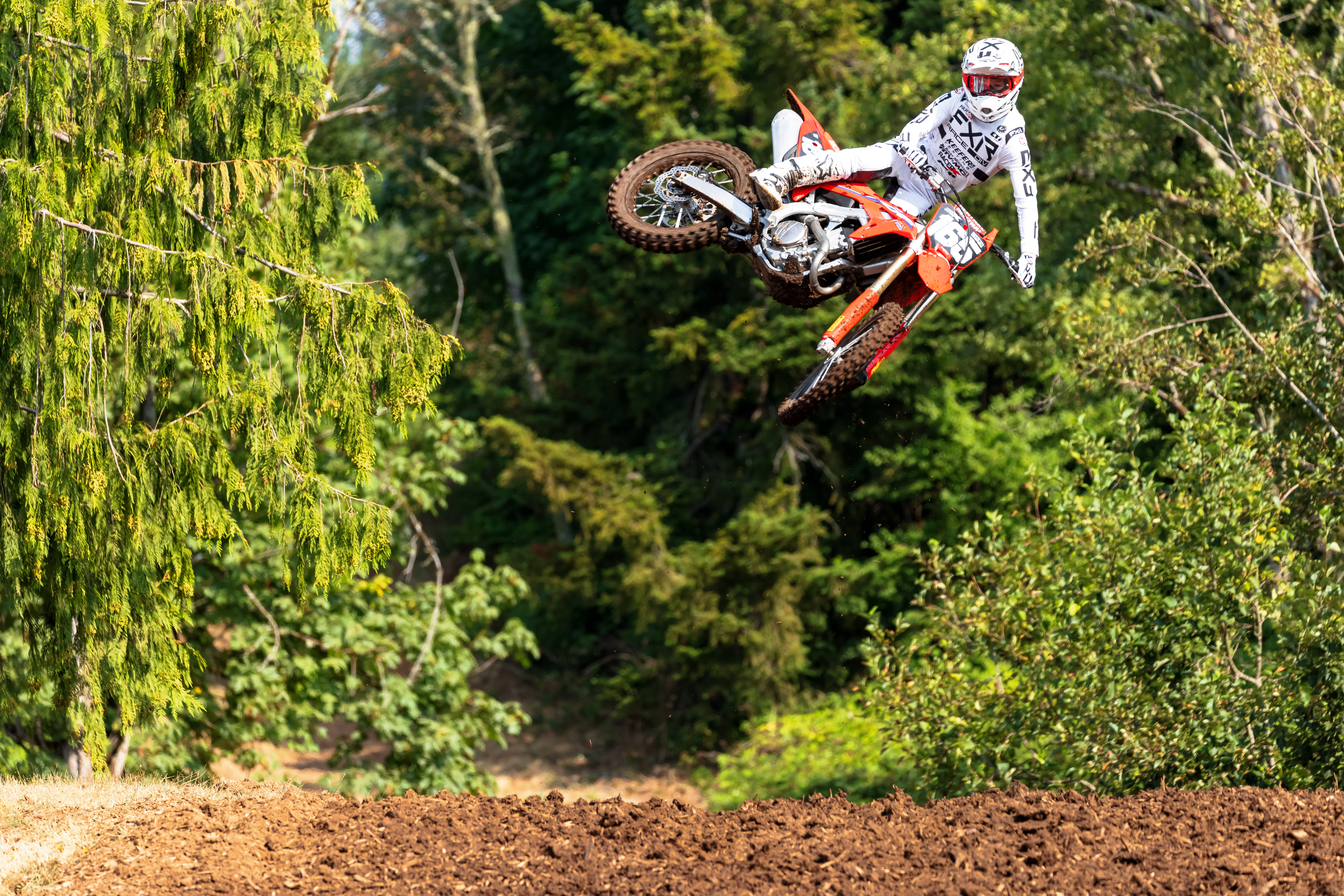 Clutch: The nine plate clutch system holds up way better to abuse than the old eight plate system. Don’t tell Honda this but I was more abusive towards the cutch when I went out then I needed to be just so I could see what damage (or heat) I could do to the clutch. It held up fine and the bike was in a constant state of rotating between riders for six hours with minimal fade. I couldn’t say that last year. 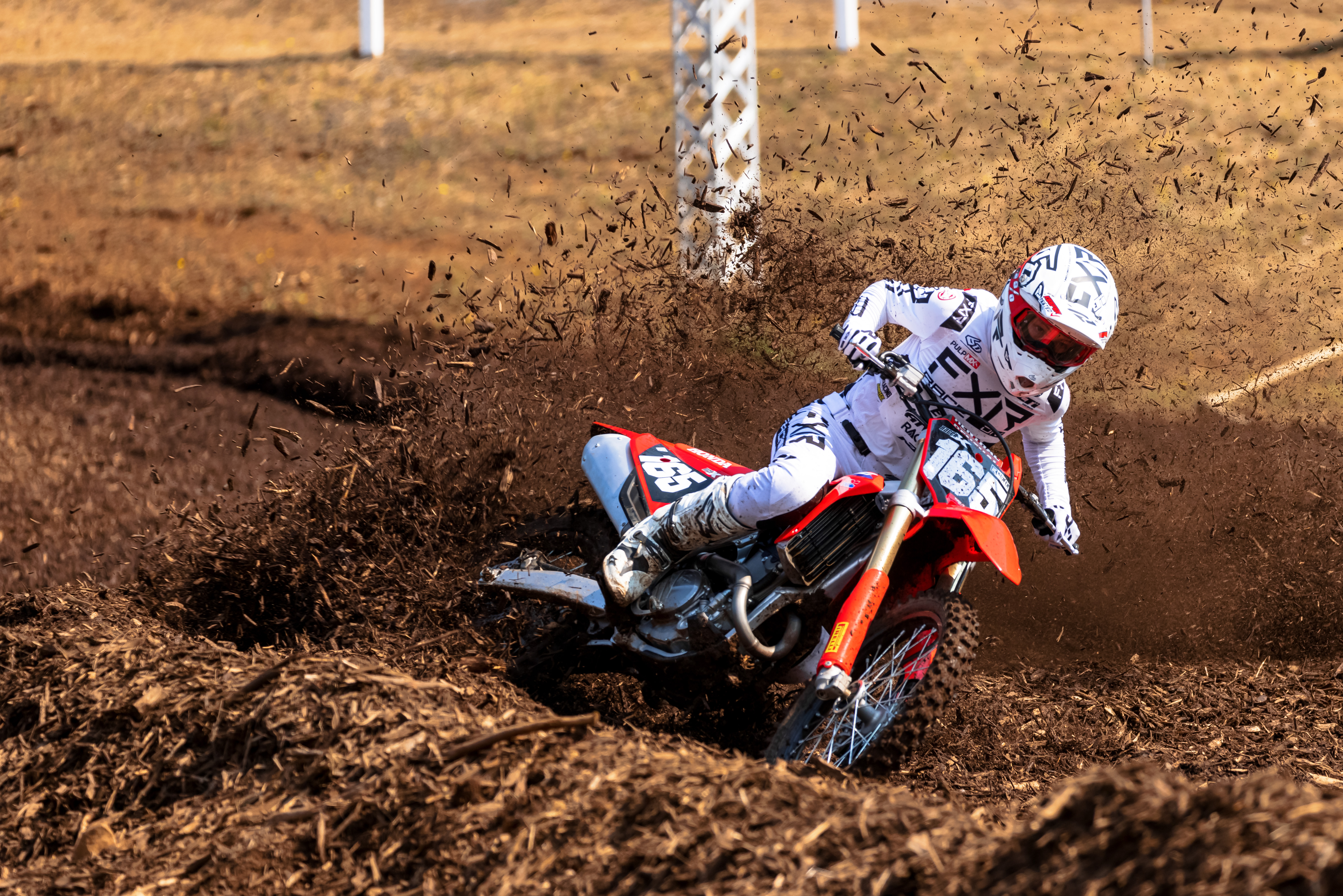 Weight Feeling: With the claimed eight pounds that the 2022 lost, you can definitely feel some of that when you start your lean into corners as well as when you want to stand up around the whole corner. I have always felt like I could stand up more on the Honda than other machines (besides the KTM), but the 2022 just gives me that feeling even more. Maybe this will not grab your attention that much, but it’s nice to have that lightweight feel while trying to maneuver you and your bike in ruts while standing. 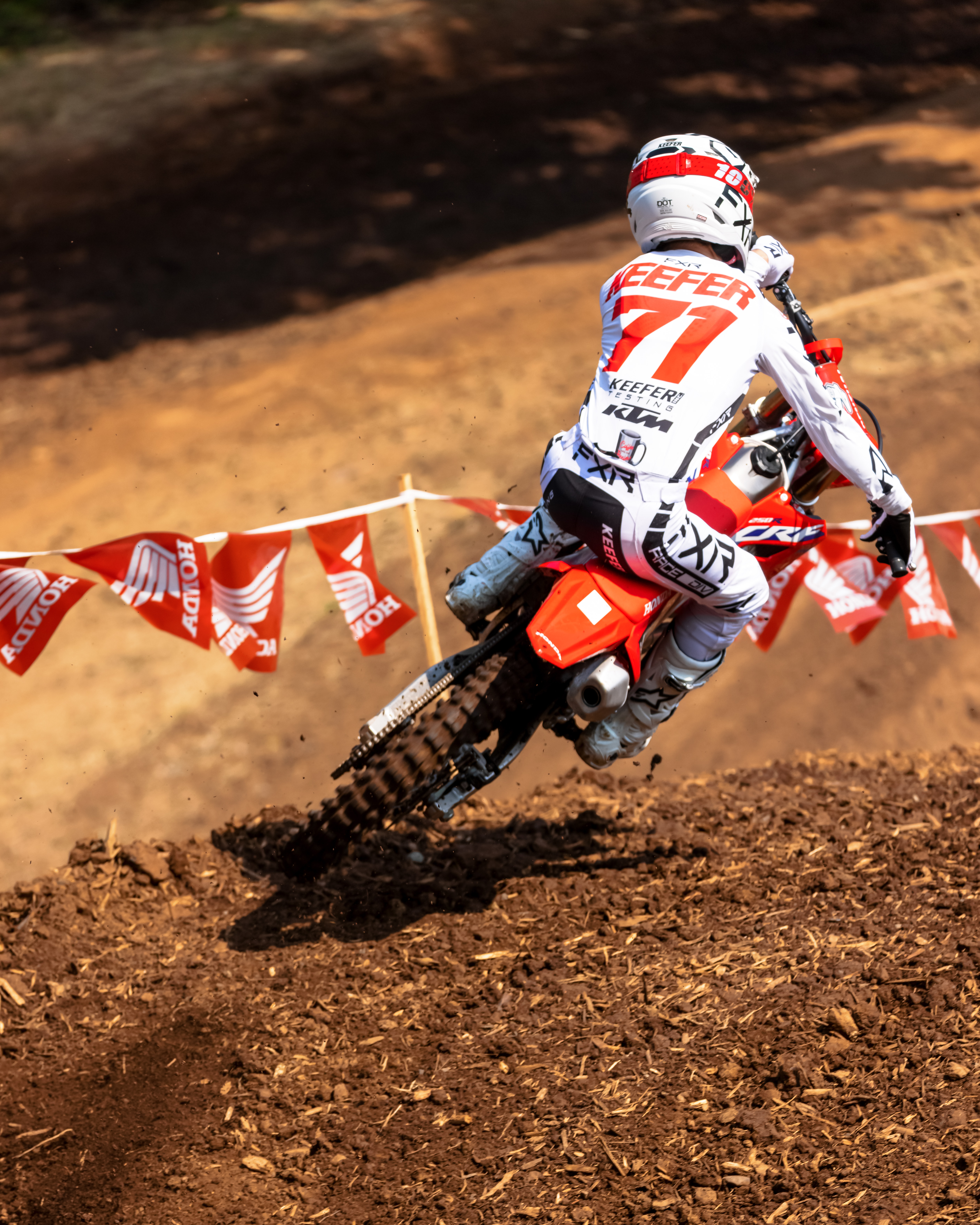 Tires: Having Pirelli on an OEM is huge news. Dunlop has dominated OEM’s for years, but with weight in mind, Honda decided to try the Pirelli MX32 Mid-Soft tires n the 250R and they work well. I do wish that the 1.85 rear wheel came equipped with a 2.15 and a 110 rear tire, but I am fine with the performance of the Pirelli. The carcass feel of Pirelli’s rubber absorbs a lot of the track before it gets to your suspension and I like that feeling out here on the west coast. I do know that the Pirelli carcass will not last as long as the Dunlop, but these tires are built on performance, not durability.