Ken Roczen dominated Unadilla and Phil Nicoletti said it best on the PulpMX Show on Monday night, “he made it look easy”. He was fastest qualifier and set the fastest lap in both motos, got 1 of 2 holeshots, led 27 of 30 laps, and won both motos to take home a perfect 50 points. Plenty of folks have talked about how his riding style is suited to the track, so instead of talking about that more, let’s take a look at the lap times and see just how much he dominated the competition.

In the first moto, Ken Roczen and Aaron Plessinger had an intense battle until Aaron ‘Larry looped it’ on lap 8. They were pushing each other to the limits and set a blazing pace. In those first 8 laps, Ken Roczen set 6 of the 10 fastest laps in the moto. However, it’s worth noting that Aaron had set 3 of the fastest 5 laps! Both of these riders were in a class all their own though Ken was just a notch faster than Aaron. 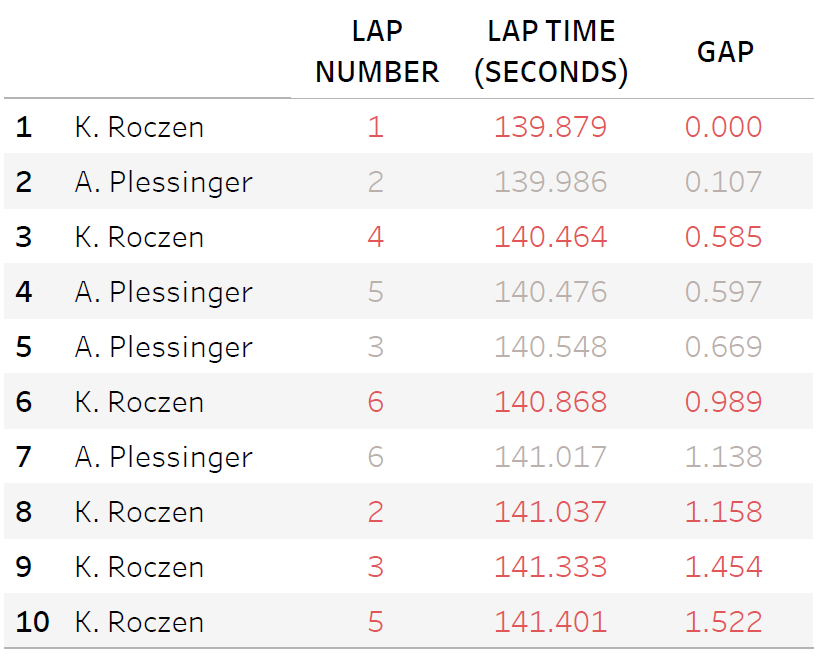 What’s most interesting to see is that both Ken Roczen and Aaron Plessinger set a fastest lap that was almost 2 seconds faster than any other rider (see the chart below). The Frenchmen duo of Marvin Musquin and Dylan Ferrandis was 1.8 and 1.9 seconds back. For a moment, consider that Ken and Aaron set fastest laps that were almost 3 seconds faster than Eli Tomac’s best lap! Eli Tomac won 3 championships in a row between 2017-2019 and Ken and Aaron set a pace to beat Eli by 30 seconds. 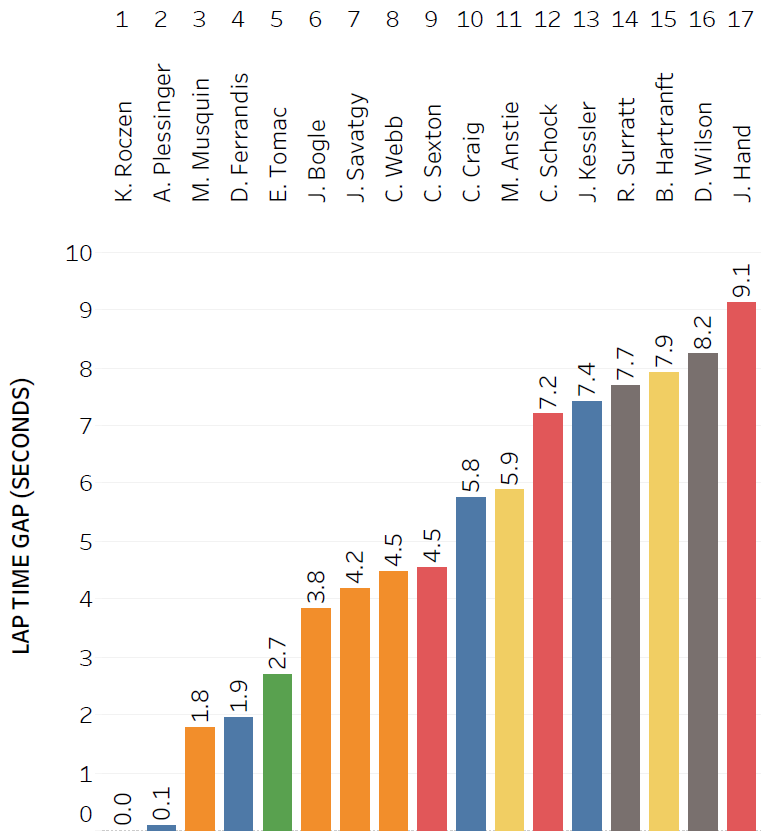 Finishing out a look at the first moto, the chart below highlights the gap between Ken Roczen and Aaron Plessinger vs. Eli Tomac each lap of the race. For those first 8 laps, they were gapping Tomac by approximately 2 seconds a lap. Whether you’re a fan of Ken or Aaron, they put on one helluva great show in moto 1. 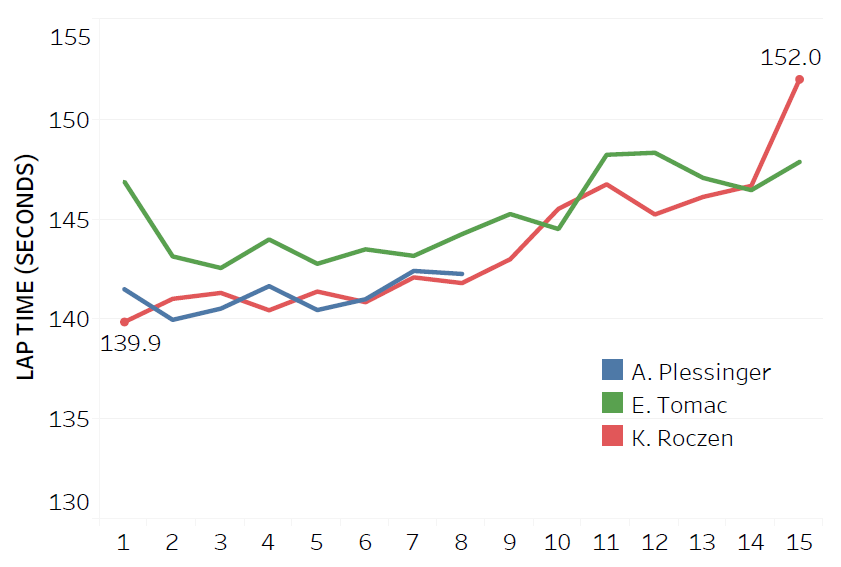 The second moto was more of the same from Ken Roczen, but instead of Aaron Plessinger, it was Chase Sexton that joined him in setting a blazing pace. Ken set 5 of the 10 fastest laps in the moto with Chase setting the other 5. Similar to the first moto, there were two riders that were riding at a pace well above the rest of the field, but it was only Ken Roczen that did it in both motos. 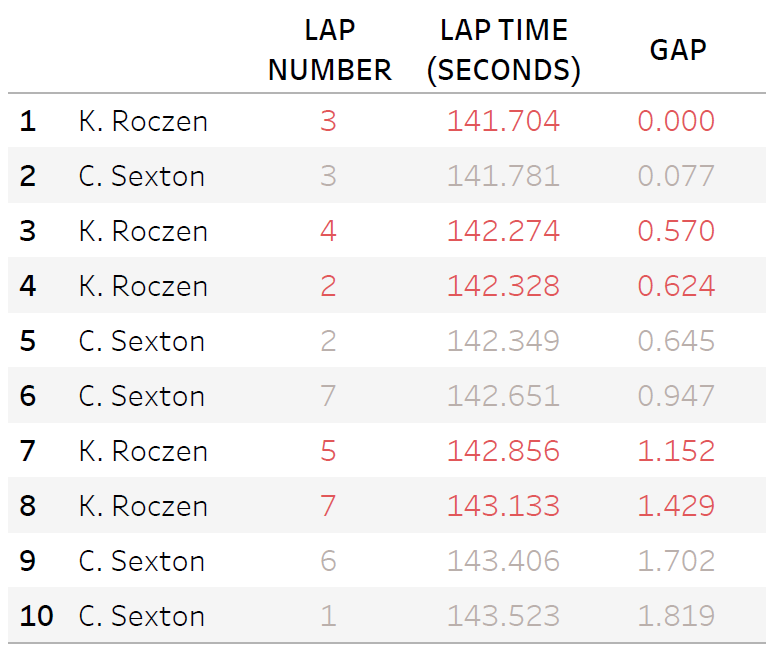 Once again, you can see that Ken Roczen (and Chase Sexton) set fastest lap times that were 2 seconds faster than the rest of the field. Interestingly, it was once again the Frenchmen duo of Dylan Ferrandis and Marvin Musquin that were 3rd and 4th. It’s tough not to consider that 3 of the 4 fastest rider are from Europe. It makes it a bit easier to explain our MXdN woes. 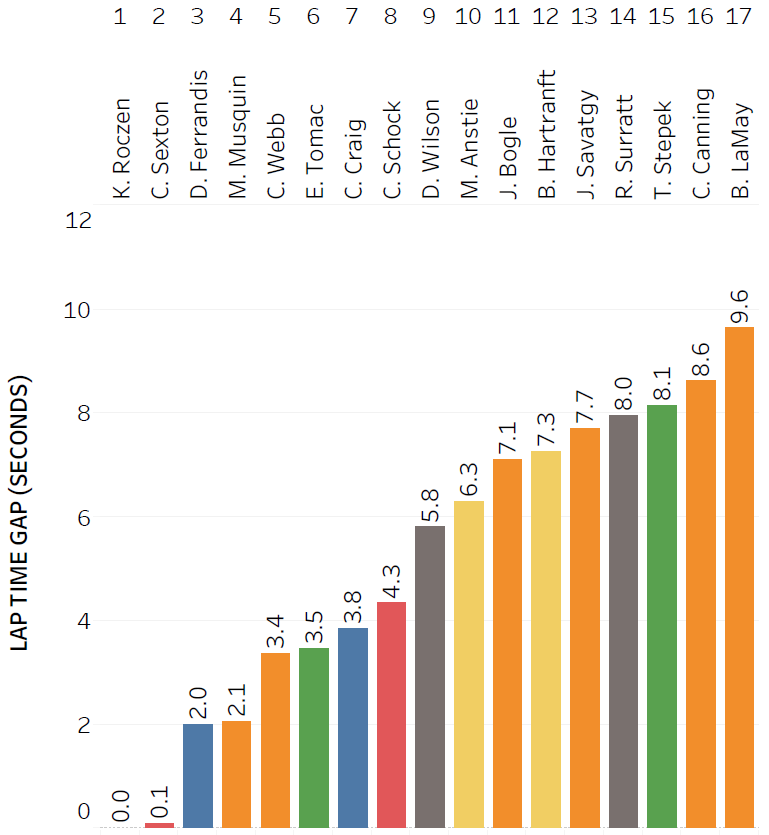 And once again, you can see that Ken Roczen and Chase Sexton were gapping the 3rd place finisher by almost 2 seconds a lap the entire moto (chart below). When you consider these are the best riders in the world, it’s amazing to see such a big gap lap after lap. 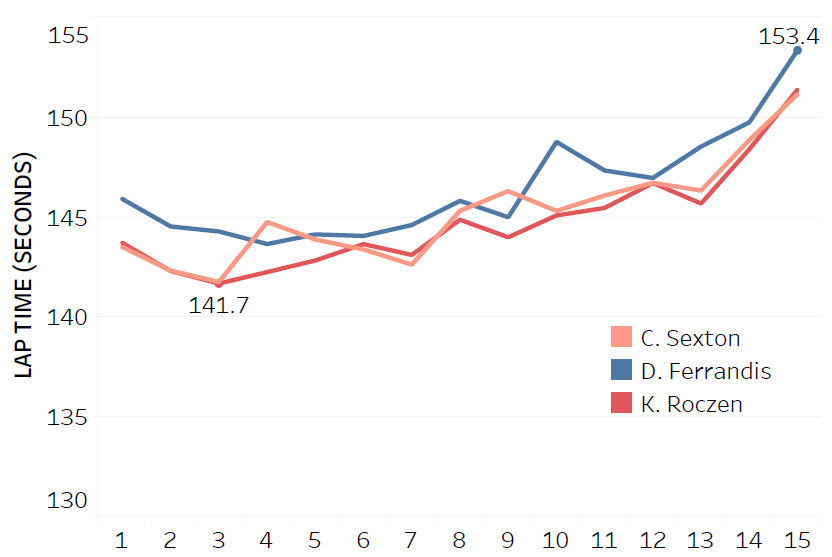 If there’s ever been a perfect weekend, Ken Roczen almost nailed it this past weekend in Unadilla. The only ‘blemishes’ were not getting the holeshot or leading the first 3 laps of the second moto. On a difficult track, Ken was able to set lap times that only Aaron Plessinger and Chase Sexton were able to match, and neither of them were able to do it both motos.