For this edition of Classic Ink, we are going to take a look back at the history of Husqvarna. 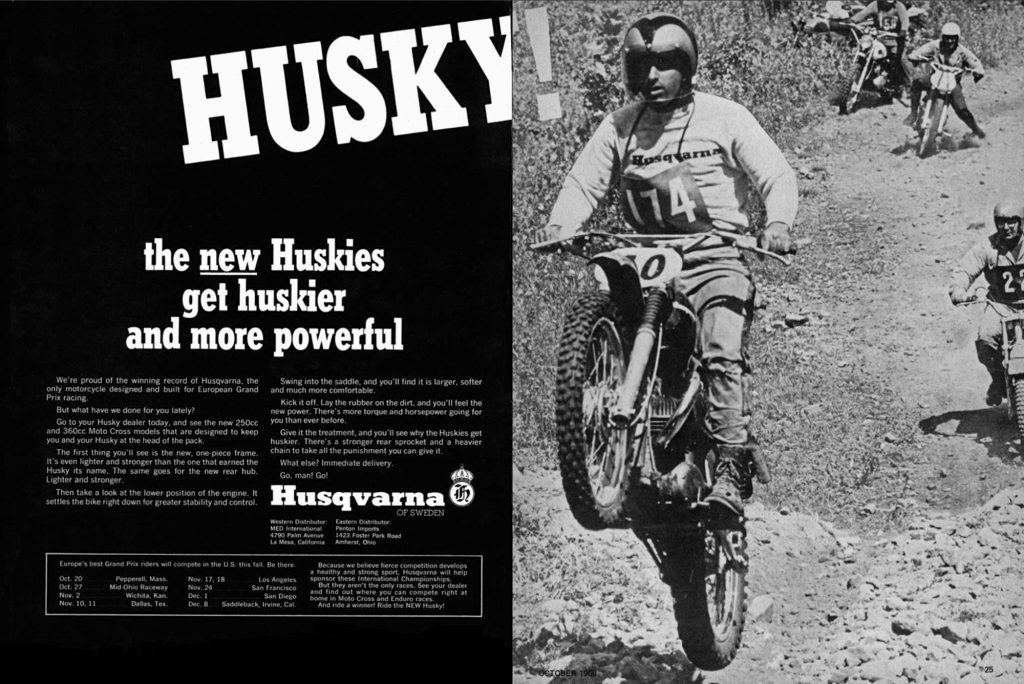 In the 1960s, Husqvarna was one of the first brands to make the move away from the heavy four-strokes to the lighter and nimbler two-strokes. With Swedish superstars like Torsten Hallman, Ake Jonsson, and Bengt Åberg at the controls, Husqvarnas of this era became synonymous with motocross success to a new generation of American motocross fans. Photo Credit: Husqvarna

No marque in motocross has enjoyed and endured as many ups and downs as the iconic Husqvarna brand. Currently an offshoot of powerhouse KTM, Husqvarna has been at the top of the mountain and the bottom of the heap many times in its 118 years as a motorcycle brand. One of the most storied brands in Swedish history, Husqvarna can trace its roots back to the 1600s as a manufacturer of small arms for the Swedish military. In 1903, they branched out into two-wheeled machines and by the late fifties they stood as one of the premier brands in the nascent sport of “moto-cross.”  An early pioneer in the switch to two-strokes, Husqvarna played a pivotal role in bringing the sport of motocross to America and stood as one of the premier brands in the sport well into the 1970s.

By the early 1980s, however, the Swedish brand had begun to fall well behind its competitors from Japan. As Japan pushed the envelope of motocross design relentlessly forward, Old World brands like Maico, Ossa, Montesa, CZ, Bultaco, and Husqvarna struggled to keep up. By 1986, only Husqvarna remained, and their fortunes were highly in doubt. 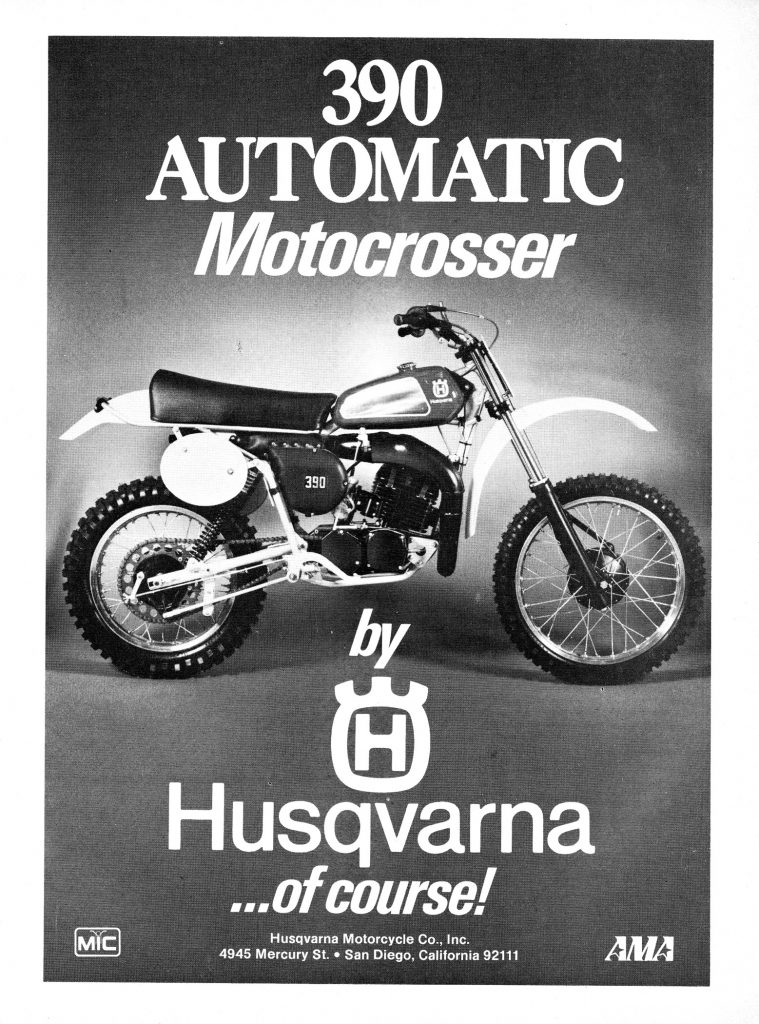 Never afraid to push the envelope of design, Husqvarna in the seventies continued to be one of the most innovative manufacturers on the track.  Unique machines like their 390 Automatic proved that the Swedes were more than willing to blaze their own way to the victory podium. Photo Credit: Husqvarna

While many of the traditional European brands struggled, one brand rose to the forefront as a legitimate challenger to the Japanese. Italy’s Cagiva rose from the ashes of Harley-Davidson’s failed motocross project to become 125 World Motocross champion by 1985. The Italian machines offered powerful motors and technology on par with their rivals from Japan. While not imported in large numbers into the US, the success of Cagiva’s off-road and street operations in Europe allowed them to expand their business throughout the 1980s. 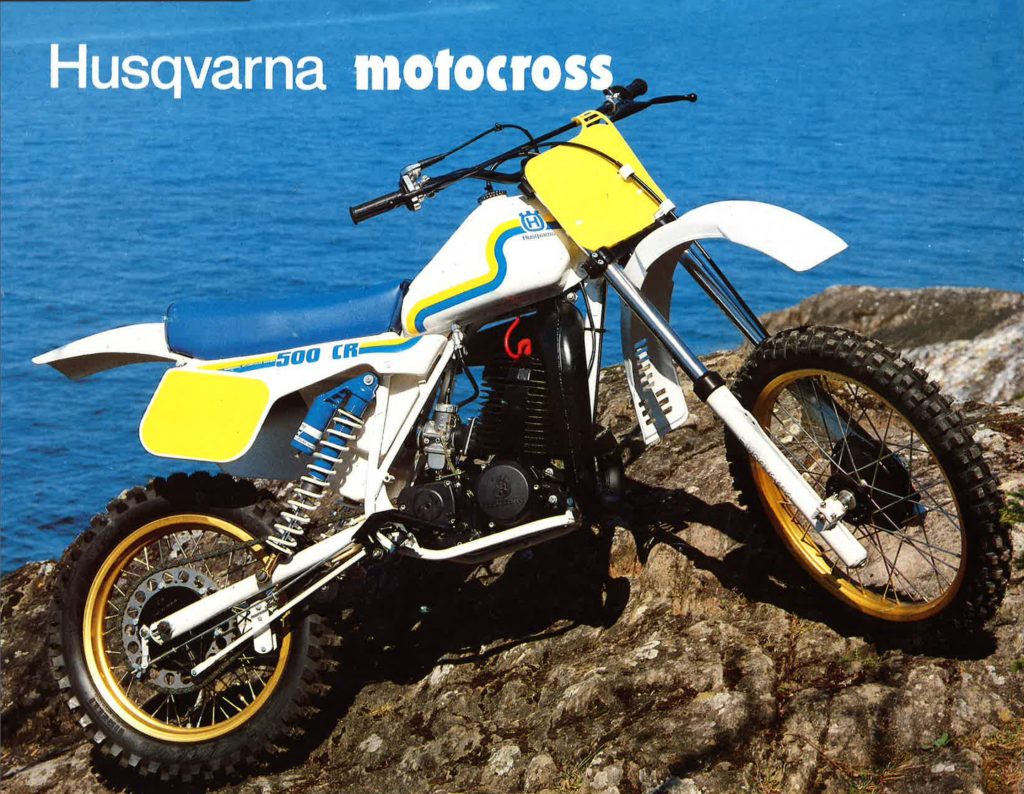 By the 1980s, Husqvarna’s motocross program had fallen quite a bit behind its rivals from Japan. Long after the Japanese had moved to massive 43mm forks, single shocks, and liquid cooling, the Swedes clung to spindly 40mm forks, dual shocks, and air cooling on all of their models. While this simplicity worked well off-road, their lack of technological sophistication hurt them on the track. Photo Credit Husqvarna

By 1986, Husqvarna was on the ropes and facing a very unsure future. The Swedes were no longer interested in chasing the Japanese and looking to unload their motorcycle operations. Thankfully, unlike so many other European brands that had just faded away, Husqvarna had a suiter in Italy’s Cagiva. In 1985, Cagiva had purchased Moto Morini to bolster their street lineup and in 1987 they looked to expand their off-road offerings by purchasing Husqvarna’s motorcycle operations. 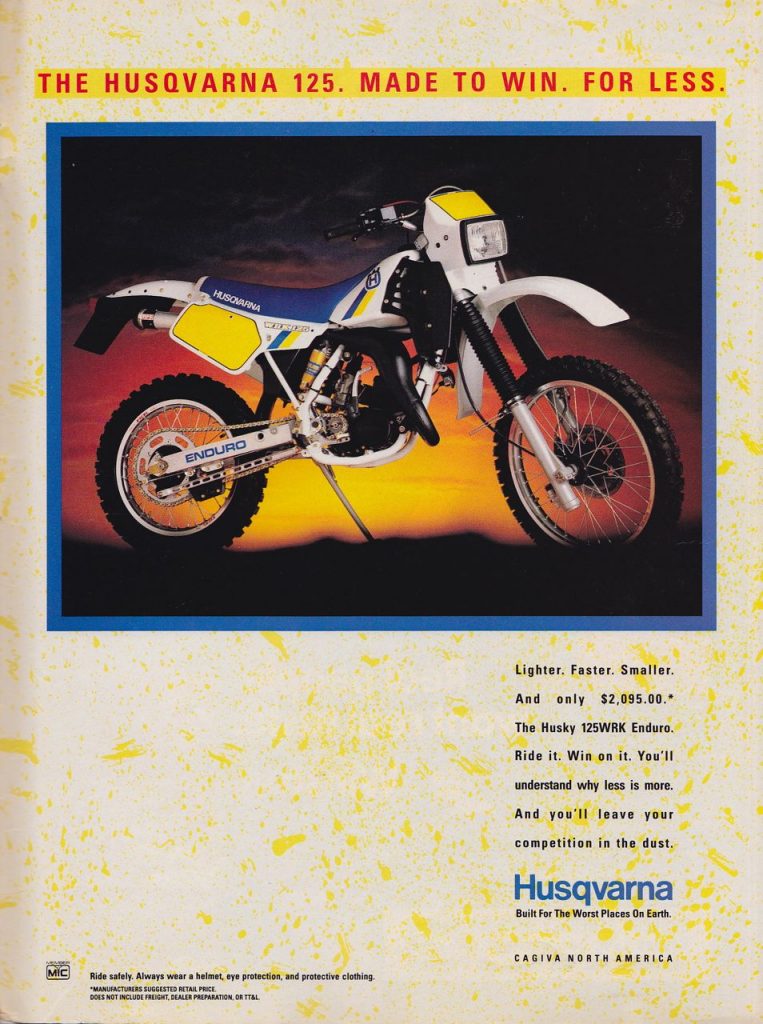 In 1987, Husqvarna sold off its motorcycle operations to Italy’s Cagiva and for several years their lineup consisted of an odd mix of Italian and Swedish machines. While branded a “Husqvarna” this 1988 WRX125 was a Cagiva 125 with a swap in colors and graphics. Photo Credit: Husqvarna

This move meant the end of nearly a century of Swedish innovation and design but insured that the historic brand would continue rather than fade away into obscurity. For the first few years after the acquisition, Cagiva’s off-road lineup was an odd mix of current Cagiva and old Husqvarna models, but by 1990, all of the new machines were rebranded as Husqvarnas moving forward. While the DNA of the old Swedish four-stroke models was still clear in the “new” Husqvarnas, the two strokes were all 100% Italian. 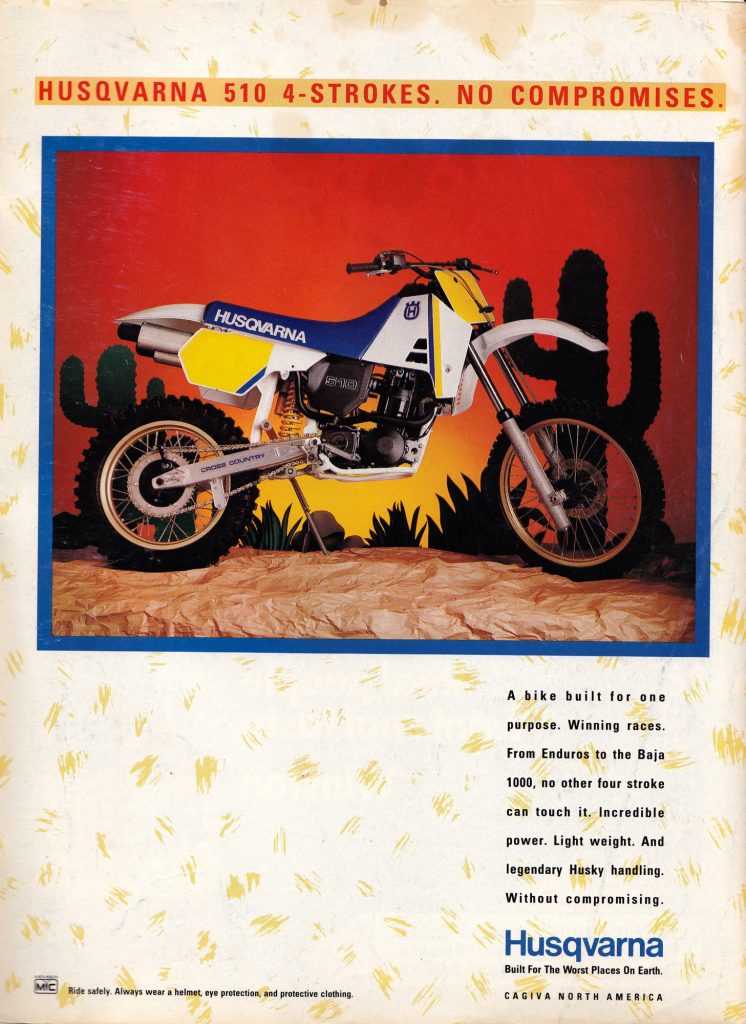 Right alongside the Italian Husqvarnas in the 1988 lineup you could find this very Swedish 510 4-stroke. Once a pioneer of the move to two-strokes, Husqvarna’s development of four-stroke racers in the 1980s paved the way for a valve-and-cam renaissance in the 1990s.  Photo Credit: Husqvarna

During the 1990s, the new Italian Husqvarnas would continue to struggle to make a dent in the American market, but their success overseas was undeniable. Several more World Motocross championships in the decade would continue the brand’s legacy of winning and propel Husqvarna into the new millennium. 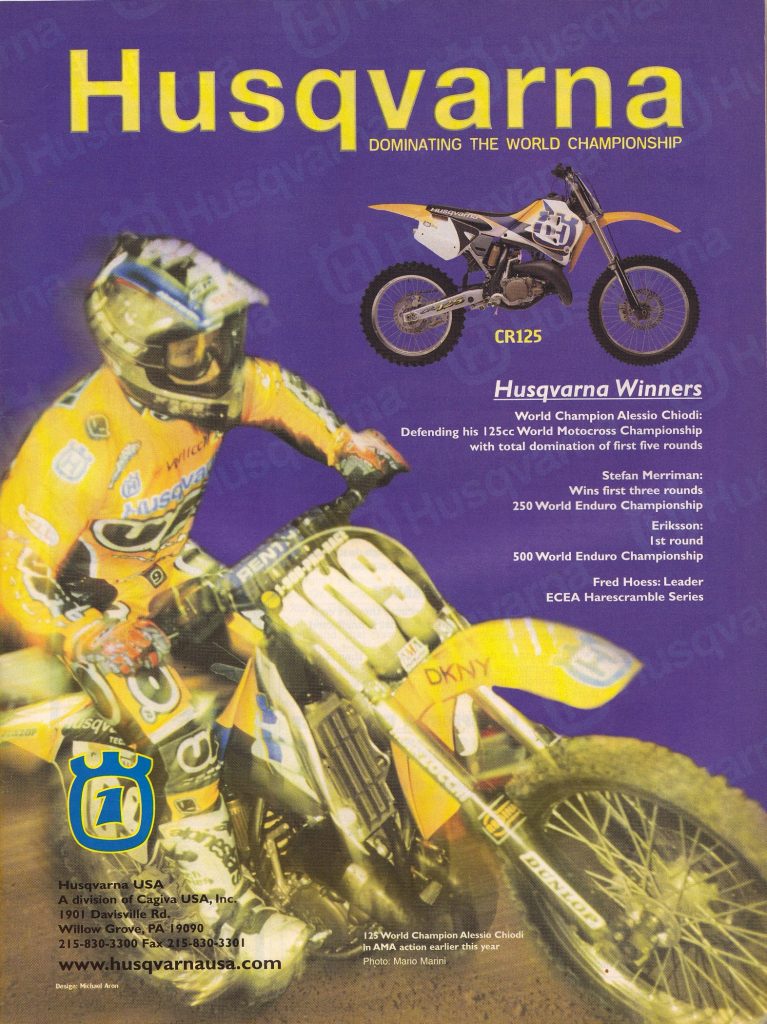 Serious winning in Europe never transferred to US success for Husqvarna in the 1990s. Photo Credit: Husqvarna

While the Italian Huskys continued to win on the world stage, their unique European design and character never really caught on with American buyers. Quirky styling, oddball ergonomics, a limited dealer network, and a lack of mainstream support by the press all contributed to Husqvarna’s struggles on this side of the pond. While often innovative, Italy’s version of Husqvarna remained more of a curiosity than a contender. 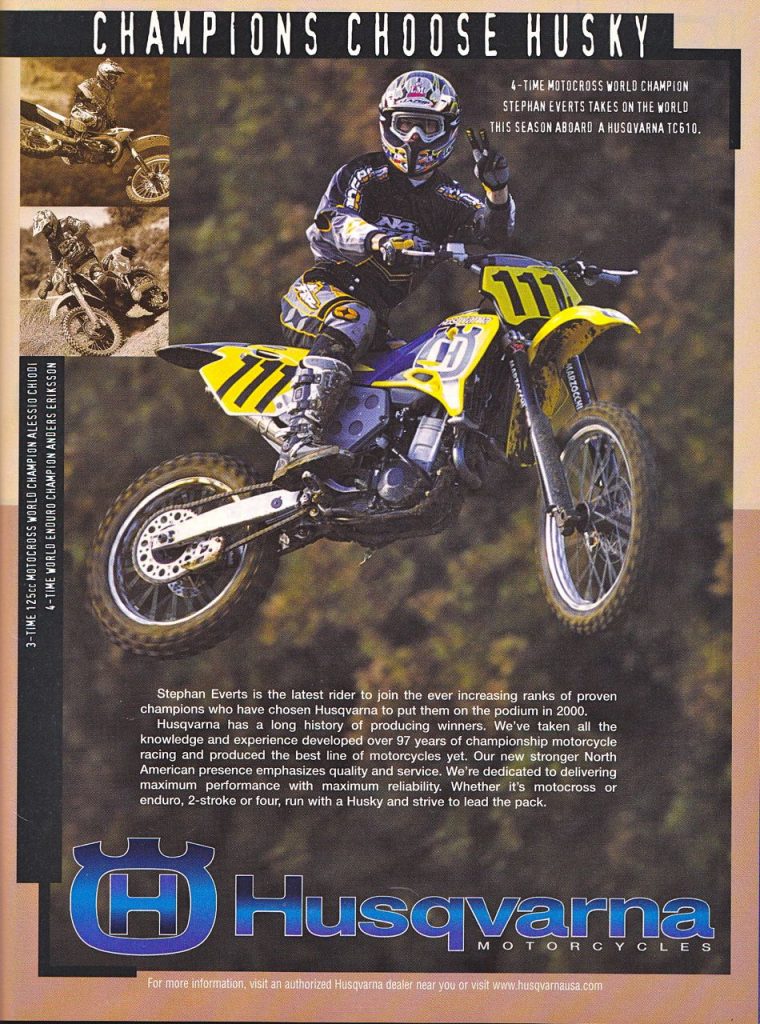 In the early 2000s Husqvarna made several high-profile moves that ended up doing more harm than good for the brand. Stefan Evert’s ill-fated and crash-marred stint with Husqvarna and the struggles of the US Fast By Ferracci squad did little to shake the perception that the Italians were just not up to standards being set by the Japanese. Photo Credit: Husqvarna

In 2007, iconic car manufacturer BMW purchased Husqvarna to bolster their off-road lineup. While the partnership offered significantly greater resources to the brand, it did not prove to be a successful pairing. Husqvarna only accounted for 10% of BMW’s motorcycle sales and the firm decided that their resources were better served by developing small scooters and electric vehicles for the European market. In 2013, BMW sold the brand to KTM AG for an undisclosed amount and set in motion Husqvarna’s modern-day renaissance. 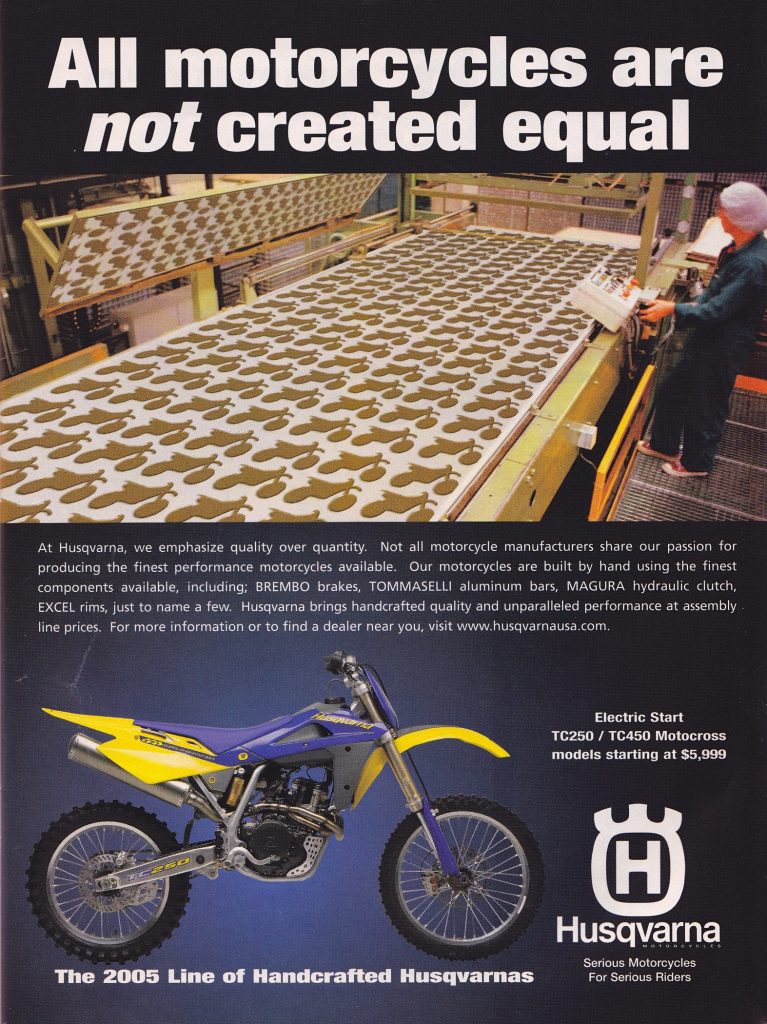 High-quality components, innovative designs, and handcrafted attention to detail were not enough to bring Husqvarna mainstream success against the Japanese in the 2000s.  Photo Credit: Husqvarna 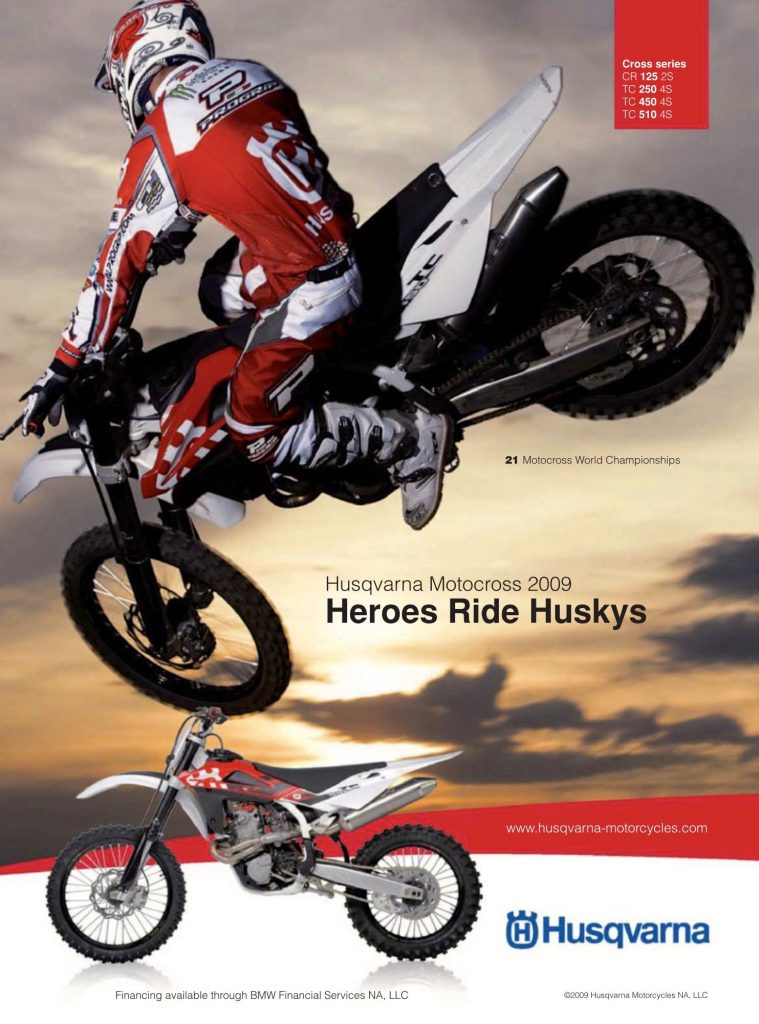 Today, Husqvarna is one of the most successful brands in off-road racing with several AMA titles in to show for their efforts. The KTM connection has brought the mainstream acceptance that the Italians and Germans could never deliver. While certainly not as quirky and unique as its forebears, a modern Husqvarna makes up for its lack of eccentricity with loads of competence on the track and trail. “White KTM” or not, there is no denying that the Austrians have done more to resurrect the historic brand than anyone since Kent Howerton. No longer the butt of jokes, Husqvarna has been revitalized by KTM and once again enjoys the prestigious position befitting one of the most historic brands in the sport. 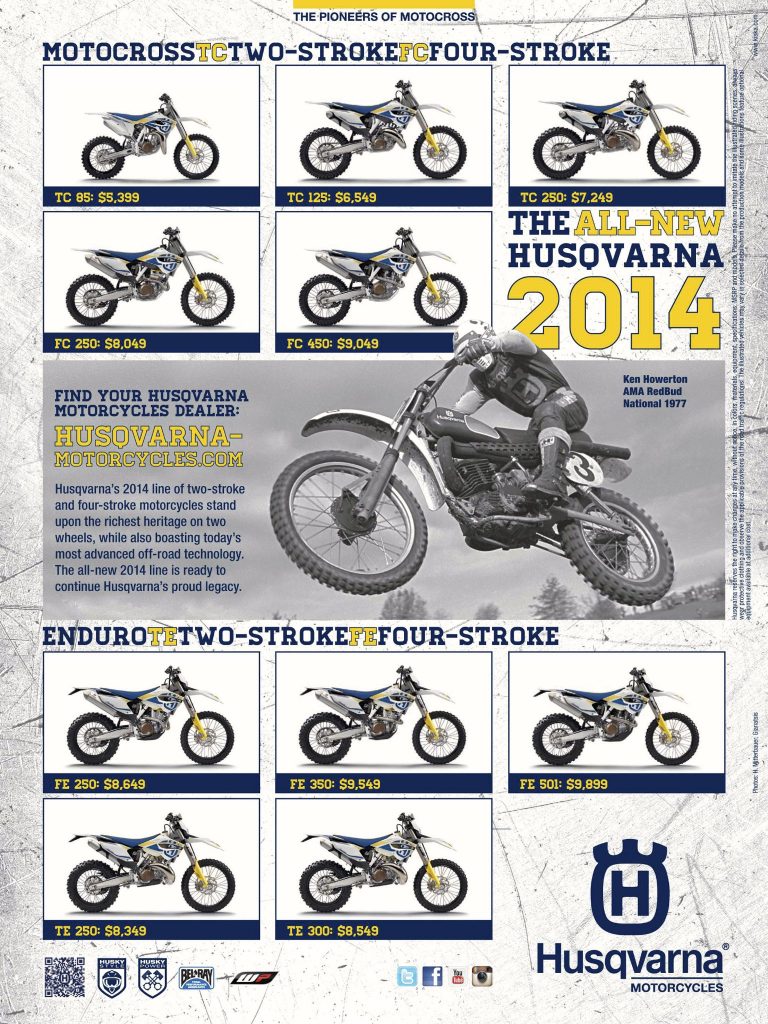 In 2014, an all-new chapter for Husqvarna was born with the introduction of the Austrian version of the brand. While not much changed from their orange cousins, this new reimagined Husqvarna proved just the thing to finally bring the brand back to its former glory. Photo Credit: Husqvarna