For this edition of Classic Ink, we are going to take a look back at a couple of interesting ads for AXO Sport’s 1994 lineup.

At first glance these two ads may appear identical but there is one very significant difference between them. The first ad is from the end of 1993 and includes one of my all-time favorite riders Damon Bradshaw in the mix. In the ad his number is listed as 9 which is the national number he earned for his performance in 1993. This was back when everyone was assigned a new number every season based on the points they earned, and Bradshaw’s number 9 was indicative of the lackluster 1993 season he had just endured. 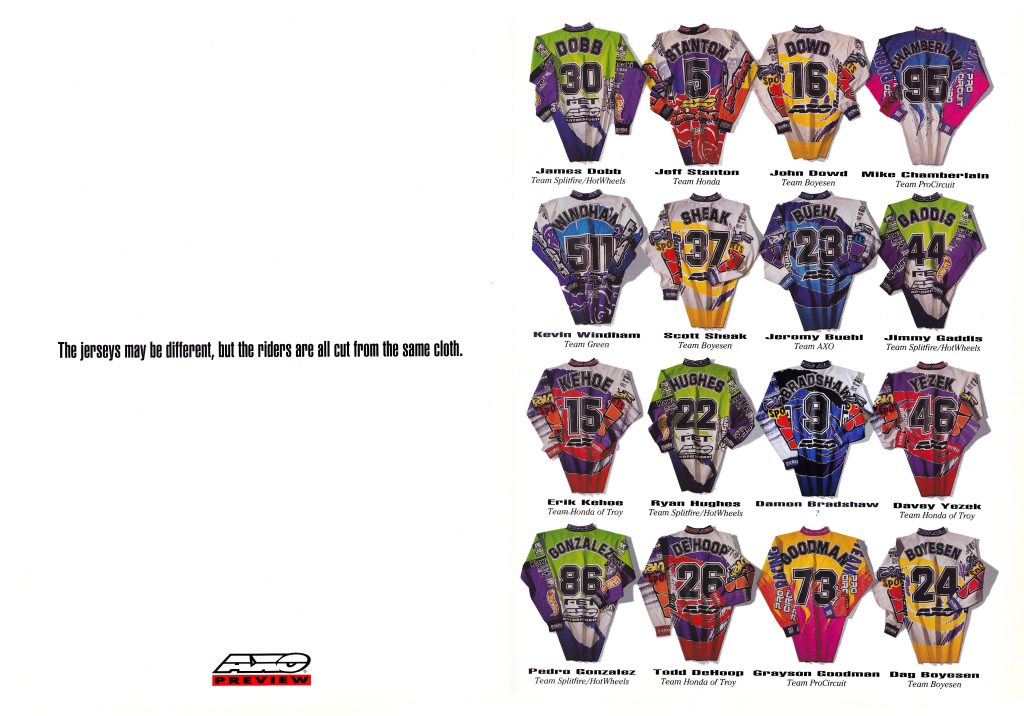 One of my favorite moments in the days before permanent numbers was the release of the new national numbers and seeing Damon with that number 9 still seems weird to me. I wonder if that 511 kid from Mississippi will ever amount to anything? Photo Credit: AXO Sport

After imploding at the last Supercross round of 1992 and taking the Nationals off to have his knee repaired, Bradshaw had come into 1993 as one of the favorites for both 250 titles. His Supercross season had started off right on schedule with a podium at round one and a win at round two. To the casual observer, it looked like Bradshaw was back, but things would quickly start to spiral for the South Carolina native. At round three, Honda’s rookie sensation Jeremy McGrath would race to victory and change the shape of the 1993 Supercross season. Both Bradshaw and defending champion Jeff Stanton would struggle to run with the number 15 and McGrath would go one to take his first Supercross title in dominating fashion.

For Bradshaw, the season would continue to spiral downward as frustration and depression sapped all the enjoyment out of his racing. In interviews, it became very clear that Damon was on edge and very unhappy. Always outspoken, it was not completely shocking to see Bradshaw speak his mind, but many close observers felt that Damon was more than just unhappy about losing to McGrath. At season’s end, he would make the shocking decision to walk away from a multi-million-dollar contract with Yamaha and retire at the age of only 21. 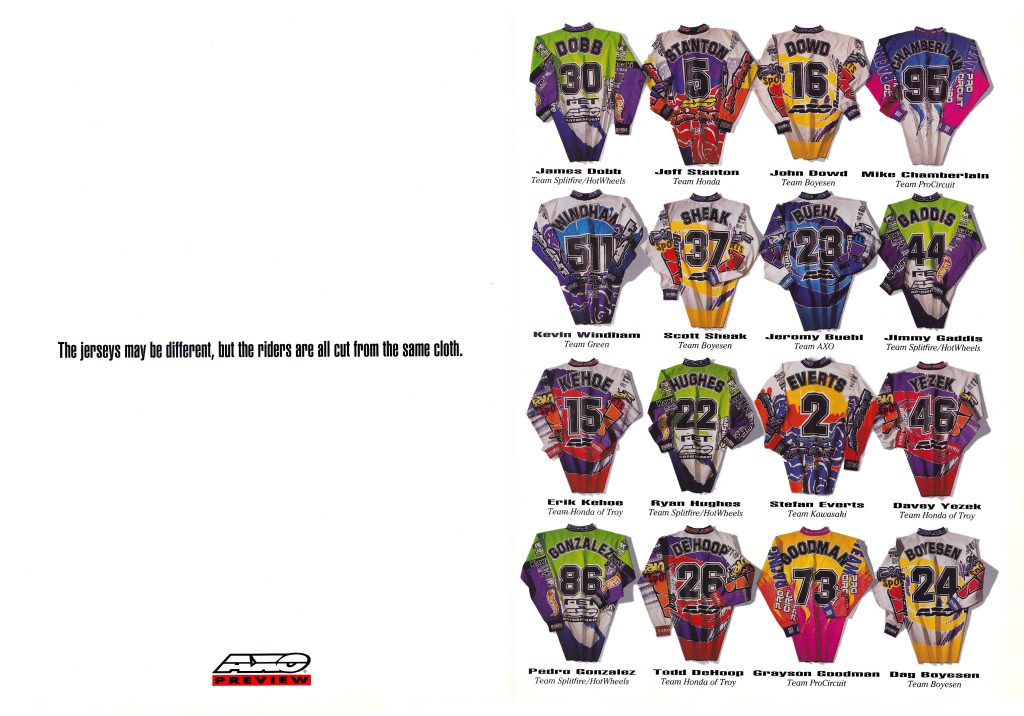 It is pretty interesting and probably indicative of the general lack of interest America was showing in GP racing at the time that Stefan Everts failed to make the cut in the first version of the ad. Everts was already a World Motocross champion and certainly a bigger star than 90% of the names here yet he was left off in favor of a bunch of 125 support riders, a privateer, and an unknown Team Green kid. A decade before this, Everts would probably have been the only name in this ad. Photo Credit: AXO Sport

As AXO Sport’s number one rider, Bradshaw’s retirement was a major blow to the gear giant, and it is clear that in this first ad Jim Hale’s team was still holding out hope that Damon might change his mind. The question mark below his name is indicative of this uncertainty but unfortunately, Bradshaw would make good on his promise to sit out the 1994 season.

In the second ad, a few months have passed and AXO is resigned to Bradshaw’s decision. In this version, European rider Stefan Everts has replaced Bradshaw and joined the many other names representing AXO for 1994. Thankfully for Bradshaw fans, Damon would make a return to racing in 1995, but his days as the premier rider in the sport were over. He would win one more race at High Point in 1997, but would never return to the level of greatness he had shown early on in his career.