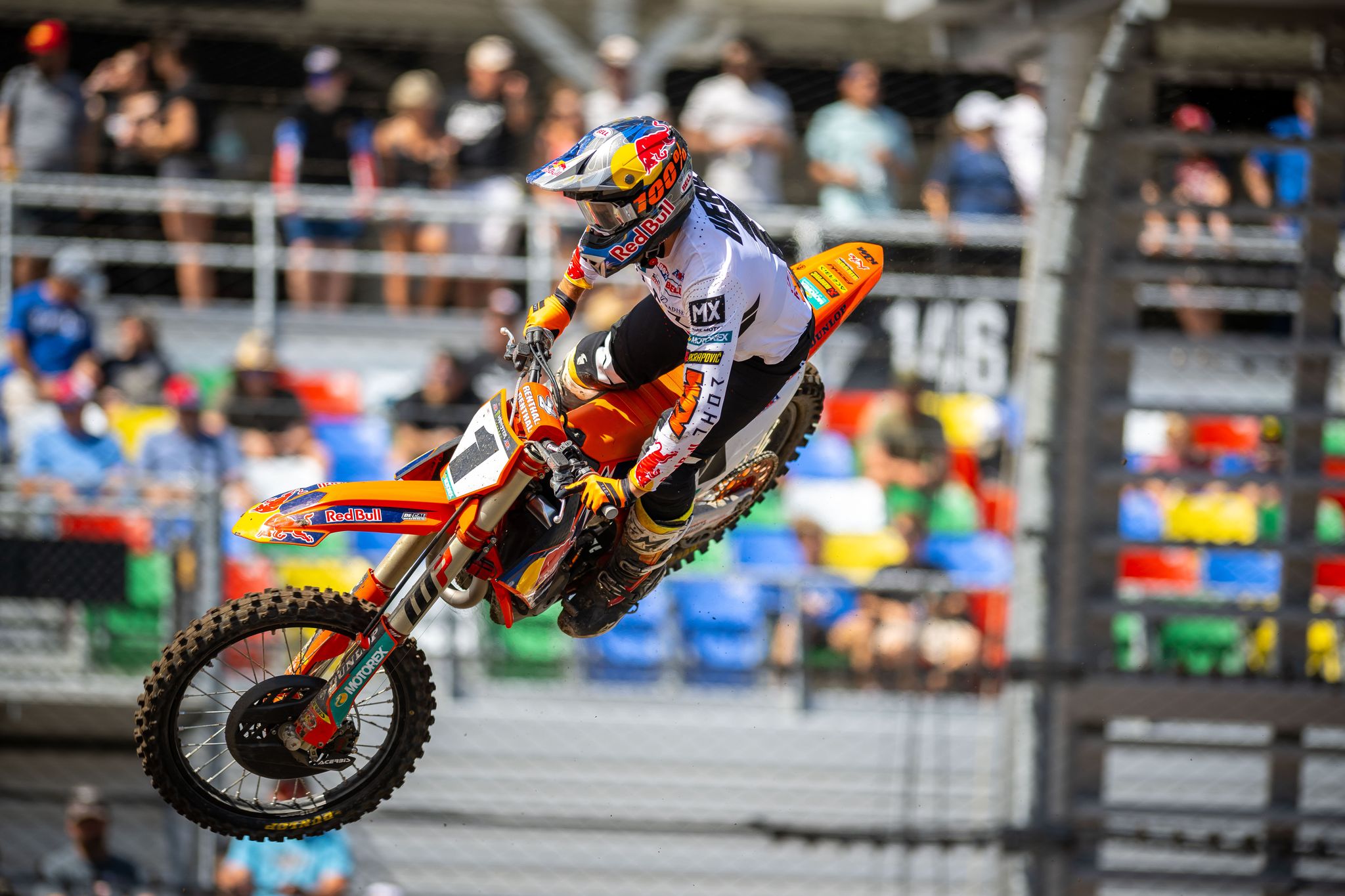 This week’s Daytime Program is going to be short as I was in Mesquite, Nevada for the Loretta Lynn Area Qualifier with the family. I missed all of practice so I didn’t get to analyze anyone or look at bike set up as much as I would like. I did watch the night show and thought I would write about a few things that caught my eye. We will be back with regular scheduled programming next week! 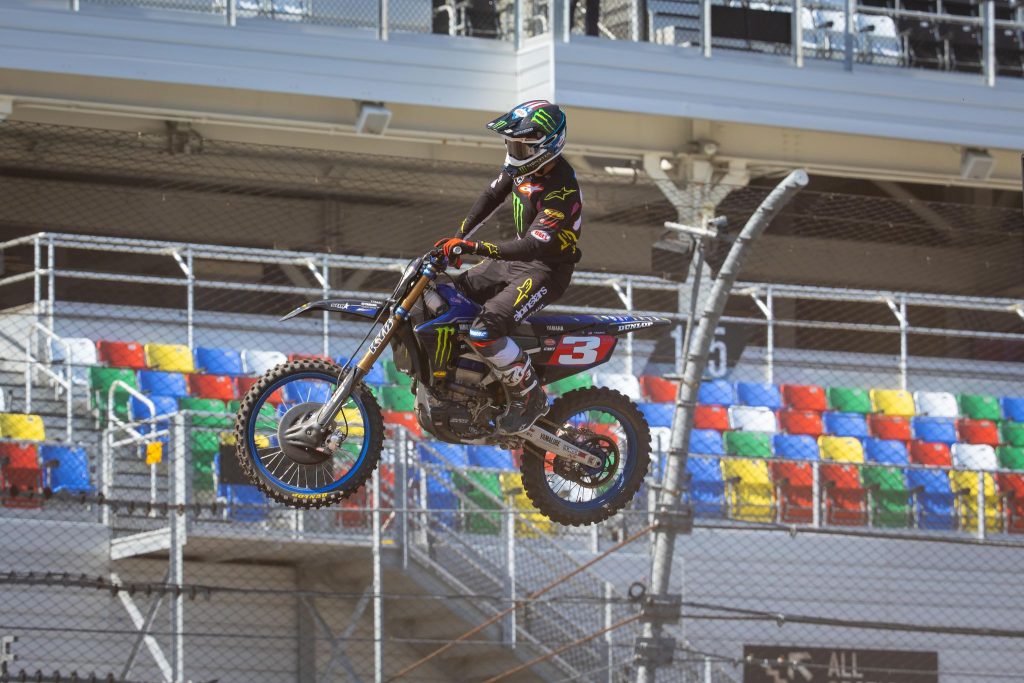 Eli Tomac: When I asked if Eli change his setting for this weekend at Daytona, I was told that he didn’t want to change anything on his bike and that he was comfortable. This 2022 Eli maybe isn’t the gnarliest we have ever seen, but to me he seems more comfortable at being patient and waiting for the race to come to him. Webb was riding good, but Tomac had those outdoor outside lines working for him. Being a six time Daytona champion is no joke and the jokes about Eli being the most inconsistent champion we have ever seen has been muffled this season. He is being consistent! Oh and this is the first time we seen the Yamaha smoking this much! Lots of SAND!! 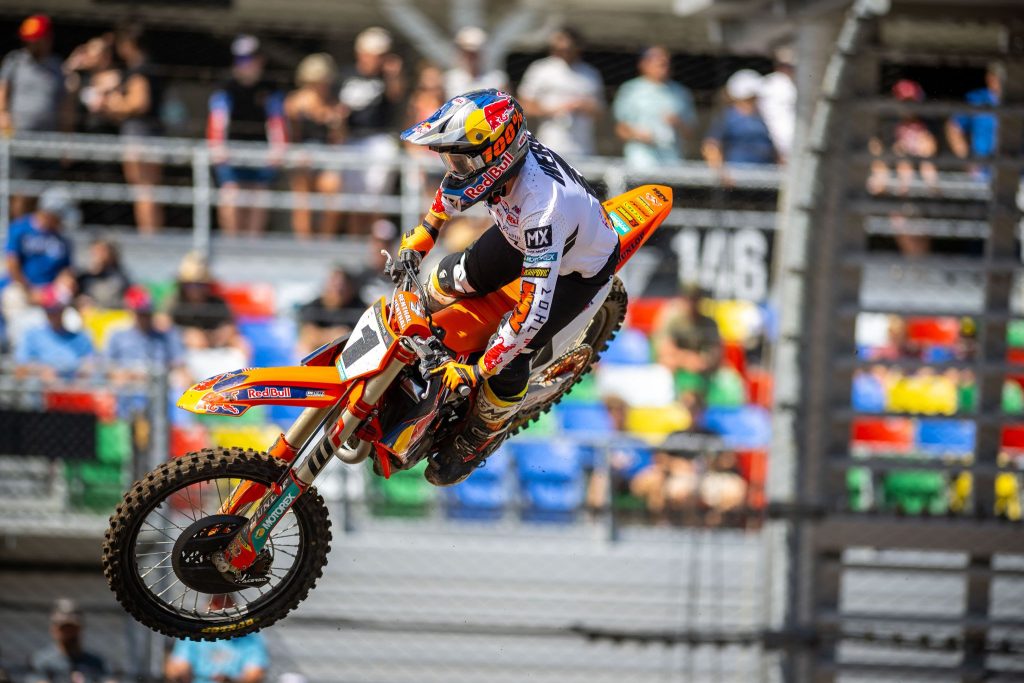 Cooper Webb: Here we go folks! If it wasn’t for Mcelrath I believe Webb keeps the lead and wins. Cooper has been playing with settings and has found the front end bite and comfort that he has been looking for. Stand by people, here comes Webb and something tells me that he will be a consistent podium guy. I have been on the production 22 FE KTM for the past couple weeks testing and also have found some settings that help cornering and front end feel so maybe the production side and race side aren’t so far apart these days? 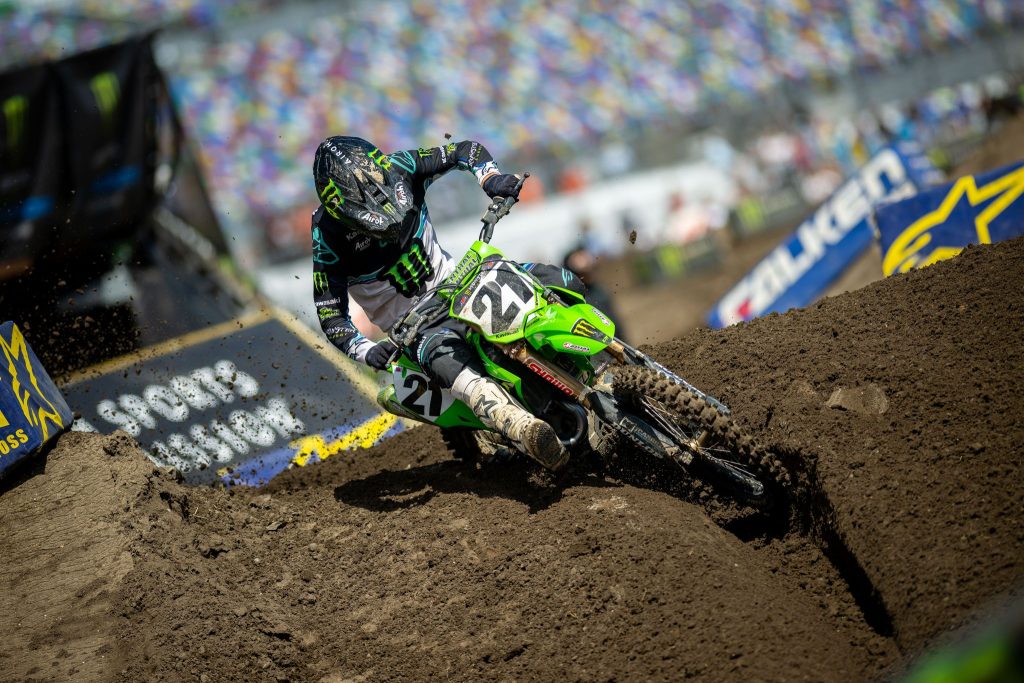 Malcolm Stewart/Jason Anderson: This started at Dallas, but let’s face it, Anderson dived bomb Mookie in the second corner and that just didn’t sit well with Mookie did it. Boom! Bam! Crash! Maybe Anderson thinks twice about banging Mookie around when he finds himself behind him. What sucks is that Mookie and Anderson both suffered in the points standing because of their actions. 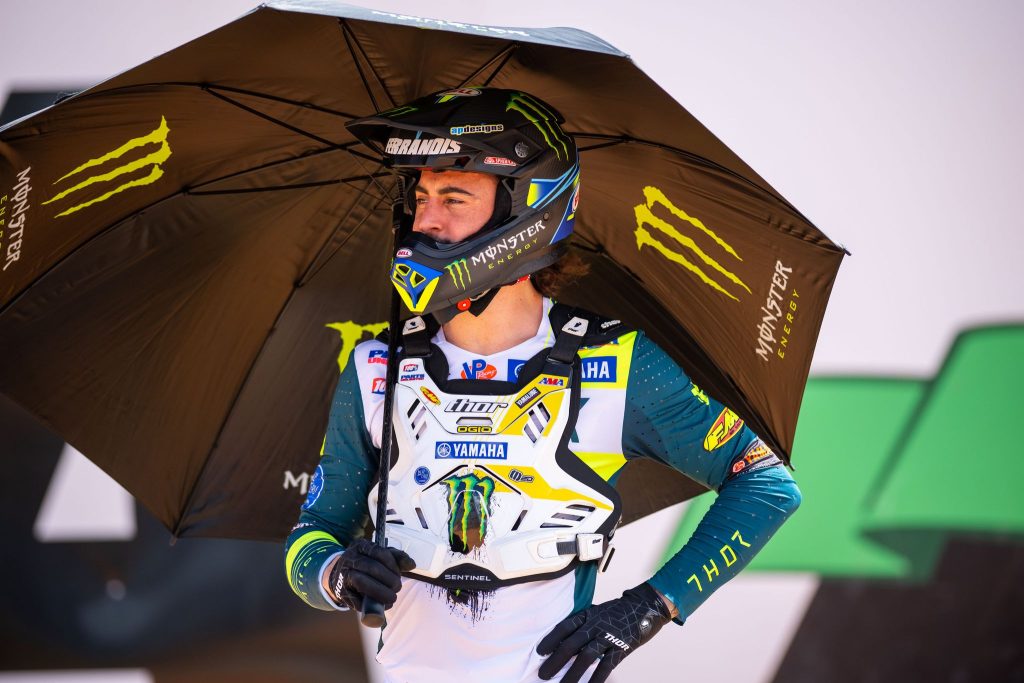 Dylan Ferrandis: Holy shit! Dylan got a top five start and finished fourth! It’s a miracle. Give the Frenchman some space of a speedway and boom he’s a good starter! I wouldn’t be surprised to number 14 hit the podium in the ATL. 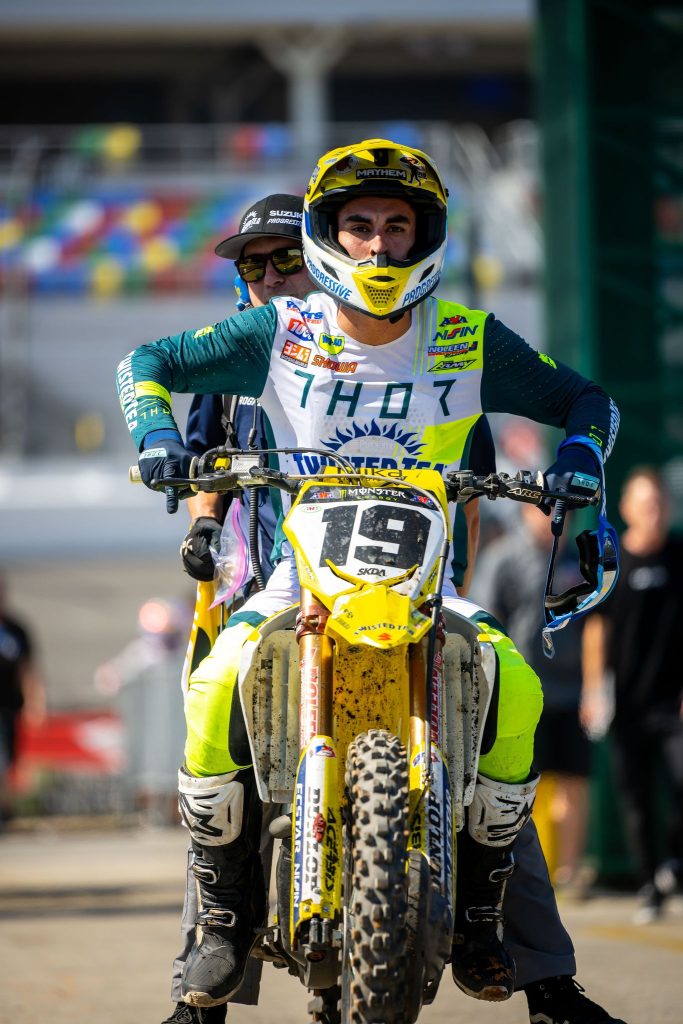 Justin Bogle: Can we give it up for Bogle here please. The dude never stops working and was in the top ten for a long time but fell back to 11th at the end of the main. He’s having fun racing his bike and is great at marketing his team sponsors! We need guys like him in our sport! 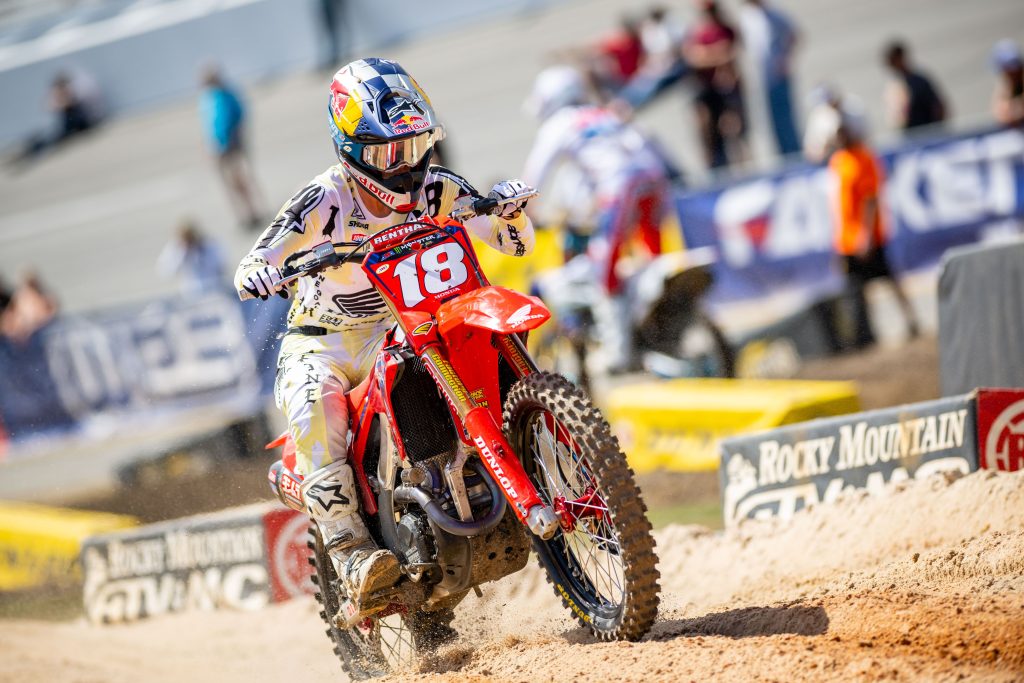 Jett Lawrence: What can you say about Lawrence that hasn’t already been said? I am not going to sit here and blow him more, but I will say that this was a nice rebound from a crappy triple crown last weekend. Crappy as in the way he rode, not his finish. 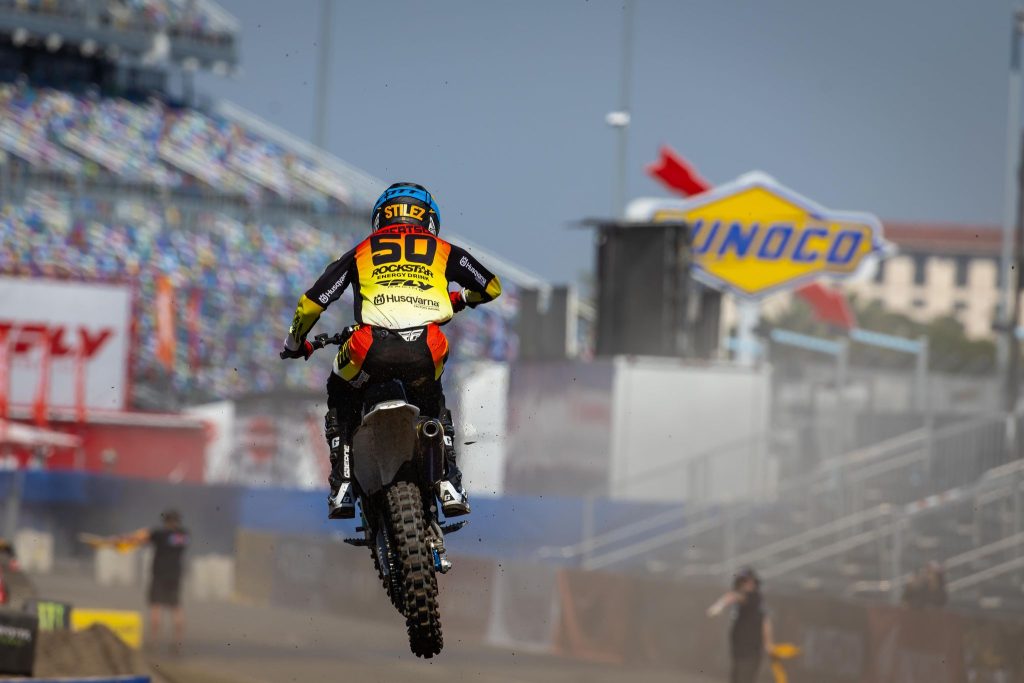 Stilez Robertson: The TV broadcast gave this guy zero play while he was in second! WTF! Stilez hasn’t been riding much and just like I mentioned before wasn’t riding at all when I was there at Baker’s factory in December. What is odd is that Daytona is more demanding and he does better which is odd. I would think he would do better in a triple crown where his good starts would reward him. Nonetheless, Stilez has been riding good, getting great starts and looks to be building his fitness up while racing. Let’s hope he keeps this momentum headed into the right direction and he can put this good result into the next round! Oh and kudos to Mike Brown for helping riders like Stilez during the week in order to get him ready for Saturday’s! 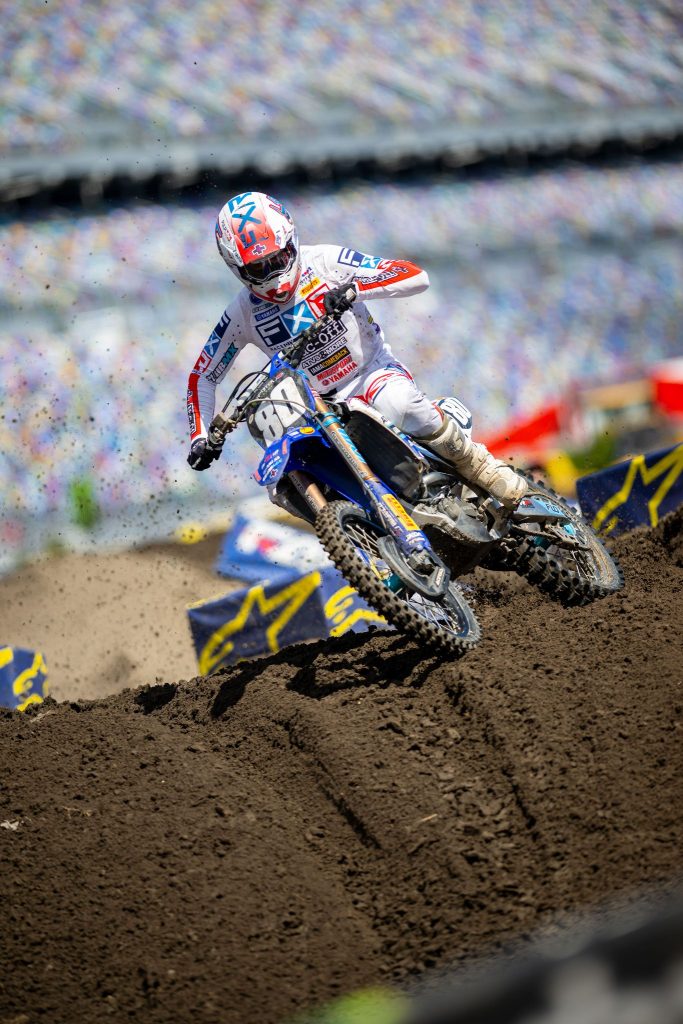 Enzo Lopes: The Pulp MX helmet sticker rider almost had a damm podium in site! Enzo has been keeping it on two wheels, has improved his whoop speed and looks to have some decent stamina. He outlasted Nicoletti and got a top five at Daytona! For a guy that didn’t have much of any kind of offer at the end of 2021, Lopes has been turning it around in 2022!