A Story About a Kitty B&E’ing. 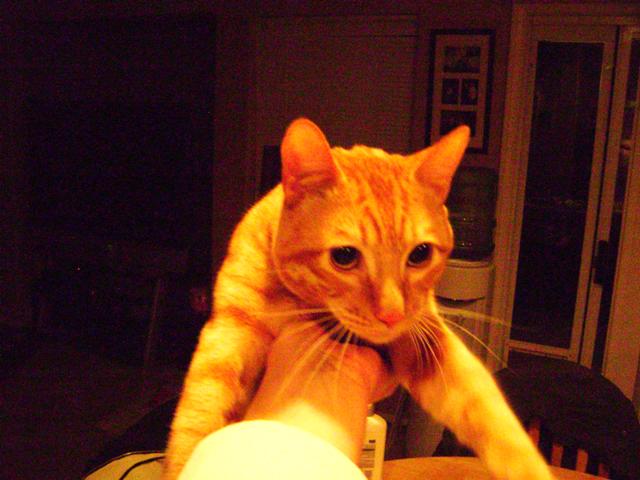 So last night my wife and I are all comfy-like in our bed at 4AM. Well, we would be comfy if it wasn’t for our 80lb basset hound named Hank who likes to come into the sack around 1AM and lay between us.

So last night my wife and I are all comfy-like in our bed at 4AM. Well, we would be comfy if it wasn’t for our 80lb basset hound named Hank who likes to come into the sack around 1AM and lay between us.

So anyways, we’re sleeping away when the neighbor’s dog behind us starts barking like crazy and waking up Angie, but not me because I’m comatose from the anti depressants I’ve been on since Ferry’s Daytona crash. So she’s up and all of a sudden, hears this meowing as well. She goes downstairs to discover this cute little orange kitty outside on our patio. Just meowing and looking up at her like that cat on Shrek.

Its obvious this cat is people owned and not feral as she picks him (she knew it was a him cause he had little kitty balls) up and the cat just starts purring and attaching itself to my wife. Now, I feel this is a good spot to tell you guys that if you haven’t clicked on the “Ungrateful Bastards” tab on this site to go and do so now. Ok? You’re back? So now you know we own four basset hounds and oh by the way, they do not like cats. On one of our walking routes we go down a couple of streets that have cats and from the moment we leave the door, it is Hank and Fred’s sole purpose to get to the ¾ part of the walk. Because that is where “Cat Street” is. They pull like mad and act up as if they are mainlining speed when they are on this street and once in a while, every so often, they hit the mother f-ing jackpot and actually see a kitty. Then they turn into little Cujo’s and freak out, acting like they want to tear the kittie from limb to limb and use it’s femur to pick the kitty meat out of their teeth. Our white dog, Buddy, also hates cats with a passion but he will only get excited IF he sees a cat, not much expending of energy by the white one if he can help it. Our other dog, Prince doesn’t seem to care and loves everything and everybody. His demeanor never changes, at the dog park, with a cat, getting hit by a car-whatever it is, he’s always chillin.

So back to the orange kitty that my wife has now named Garfield (very high on the originality scale) and is making figure eights between her feet (this is what she told me as I’m still out of it but did hear her yell at me to get up and see a cat…I think) and rubbing his scent on her. So what does she do next? Yup, she gives him water and food! Which quite possibly could be the worst thing to ever to do to a stray animal but my wife is an animal lover and would probably cut her arm off if it would save a woodchuck somewhere. So now this kitty is loving it but its 4:30 and she has to go back to bed, she puts him outside, wishes him well and comes back to me and Hank-who is snoring in my ear at this point. Did I mention that he has to have his head on our pillows?

A couple hours I’m dreaming I’m on stage with the Pussycat Dolls and Don’cha wish you were up there with me? Only the lead singer is just meowing really loud, over and over very annoying like. I’m awaken by Angie shaking me telling me to get up and check out what the hell is making that meowing noise, but I guess I don’t get up quick enough because she does and when the light is switched on, Garfield is upstairs in our hallway! He figured out the whole doggy door thing and thought that there might be more of that delicious food inside. She gasps and informs me of this fact and while I’m still trying to process that the Pussycat Dolls are actually just one pussycat and that it doesn’t want to get with me in that way, I hear a banging and crashing coming from the den. My wife is screaming, it seems that Buddy has been woken up by the kitty and he now wants to kill it. My lamp or chair be dammed. Garfield is leaping from the laz-e-boys we have to my desk, to the half wall and back downstairs before stupid Buddy can even comprehend where it went. Now I’m up and come out to the den to see a chair knocked over, a lamp turned on that has crashed to the floor and Buddy’s tail looking like a windshield wiper on high and he’s squealing. This might be the best day in his life (even better than that time my burger fell off the table) as he doesn’t even have to expend any energy and he can maybe eat a cat. Good times.

I go downstairs and my wife has put the cat outside and locked the doggy door but Kitty keeps meowing and wanting to come in, meanwhile Fred has woken up and is looking at the cat through the glass like it’s an alien. This makes me believe that in all those previous walks, he didn’t actually want to kill a cat, he just acted like he did to be cool to his life partner Hank. We slide the door open and Fred comes a little closer to the cat but then backs up slowly and goes behind the coffee table. His eyes were as big as saucers and his hair was standing straight up, he clearly didn’t want any part of kitty, despite him acting like he did when he was on the leash. My opinion of Fred changed that moment, he is a pussy and like one of those bullys in school. Once you show him up, he will back down. This was his waterloo, his General Custer last stand type moment in his life and he pretty much shit the bed. Good job Fred.

By now, ten minutes later Buddy has finally figured out that the kitty is no longer upstairs and waddled downstairs to see what was up. Prince also woke up to check everything out but again, he doesn’t care about this kitty or any of this monkey business. He just wants a treat and some belly rubs, he’s the equivalent of Sean Penn in Fast Times at Rigdemont High. Now Buddy is salivating on the glass looking at the kitty, he wants a piece of it so bad, he can taste it. My wife and I devise a plan-she goes outside and gets the kitty and brings him to the front door and lets him go. I let the dogs outside to sniff everything and the kitty doesn’t come back because if he did, he would see that there are wild beasts in the backyard that want to do terrible things to it. So the plan goes perfectly and we say our goodbyes to the kitty, Buddy and Fred are outside sniffing every square inch of the patio just to make sure they get everything in. I settle down, grab some coffee and turn on the computer-it’s now 5:45 so I guess I’m up.

Except the kitty comes back. He won’t let it go and I look in the backyard to see Fred, frozen in fear and just staring at it (good job on that redemption, Fred) and Buddy is on the other side of the bar-b-q so he doesn’t see it yet. The kitty circles the Q while Buddy goes the other way around it, no doubt getting a whiff of it. They do this comical dance around the Q one time and then, in a flash, the showdown is on. Buddy moves in slowly and just about when he gets to lunging distance, the kitty takes a swipe at Budders. This freaks Buddy out and he backs up a bit and looks to Fred for help but Fred is still scared shitless ten feet away. Prince is sleeping downstairs and couldn’t care less. What seems like hours (ok, 3 minutes) passes and finally the kitty leaps up onto the fence and just sits there mocking tubby Buddy before just strolling away. I bet he comes back though, he’s obviously very friendly with people and liked our food. Clearly he can outsmart our dogs and Hank, whose hatred of felines is greater than Buddy’s slept through the whole thing so clearly he’s not a threat. What were you doing at 5:30 AM this morning?

Blogservations from the Big Easy.