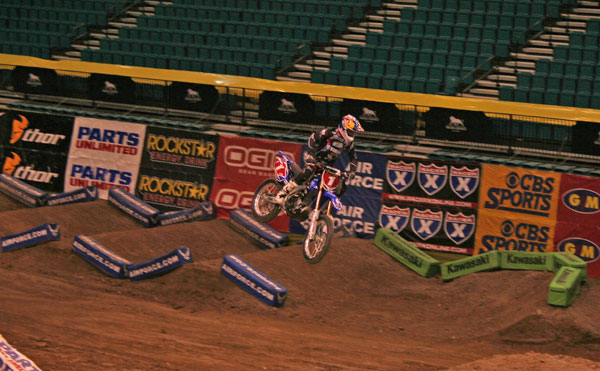 The 2009 Rockstar US Open press conference was today in Vegas. Since I live here, I rolled down to the MGM to check it out.

The 2009 Rockstar US Open press conference was today in Vegas. Since I live here, I rolled down to the MGM to check it out.

James Stewart, Davi Millsaps and Ryan Villopoto all took part in the press conference today with some interesting tidbits thrown in. Millsaps, while addressing his struggles this year said that there were reasons for his down year and that he didn’t really want to speak about it. Villopoto, when asked about being teammates with Chad Reed said that the deal wasn’t really done and that he didn’t know what was up with it. He then speculated that he didn’t know what Kawasaki was thinking in regards to putting them in the same truck and that maybe there might be another truck for Reed. He seemed to not be sure about much with that deal.

Stewie got up and said that everything was good, he liked the new bike and that being comfortable with his team will help him in the transition. He said that riding the new bike was just like switching bike brands, it was so different. When he got to the press conference he moved the Rockstar Energy cans set-up in front of him and was immediately questioned about that from a Las Vegas Review Journal reporter. James took the high road and said that he appreciates that Rockstar put the money up but that he’s a Red Bull guy and the cans were blocking the words San Manual on his team shirt. The reporter didn’t realize that and apologized. Good times. Anyways, here’s a couple of crappy shots.

Mailbag! You asked, I answered