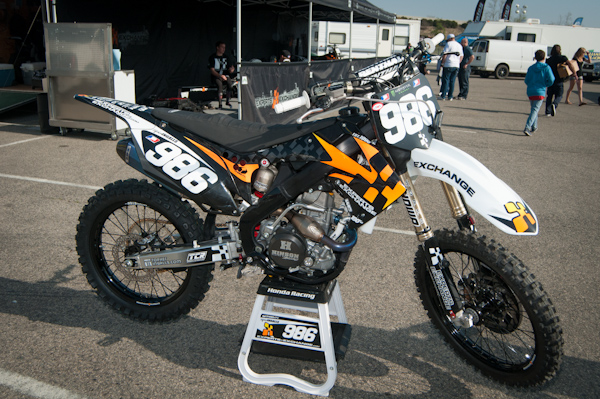 In the movie Porky’s there is a character called Meat with a stunning resemblance to Matt “Beef” Goerke who unfortunately just came up Short in L.A.

In the movie Porky’s there is a character called Meat with a stunning resemblance to Matt “Beef” Goerke who unfortunately just came up Short in L.A.

By:  Moser
Photos by:  James Lissimore

If you’ve never seen the movie Porky’s it’s the 80’s version of American Pie.  Horny high school students are attempting to get laid and hilarity ensues, it’s one of my mom’s favorite movies.  One of the lead characters goes by the name Meat and the resemblance to Matt “Beef” Goerke is uncanny.  With similar nicknames and appearances it seemed necessary to mention Porky’s and I highly recommend watching this 80’s classic.  Ironically both Topher Ingalls and Beef finished their heat races in 11th place and then both came up Just Short in their LCQ’s, and that’s the type of investigative reporting you can expect here week in and week out. At the polite request of one of my regular readers @a_arland I’ll make an honest effort to include as many to and too’s in this weeks column most likely incorrectly.  Thanks again for reading @a_arland glad to hear you enjoy my stuff and don’t take it too seriously.

Topher hasn’t qualified for a main event yet this year, he’s in that dreaded “bubble” spot in regards to speed.  When you hear the name Topher Ingalls the first thought that probably poops into your head is “I think that’s the bike Matthes has a woody over” and you would be correct.  At first glance I didn’t realize it was a Honda and to be honest at second glance I didn’t realize it was a Honda.  I bleed red and own virtually every Honda product Short of the Honda Plane, so I’ll now be cheering for Topher and his blacked out Honda with orange graphic by default.  I wouldn’t go so far as to say it’s the bike of the year like Matthes, but I appreciate one off bikes as much as the next guy and think it’s definitely cool looking.

Topher has one of the nicer looking rider websites I’ve seen it’s not as nice as www.andrewshort.com but I bet even Swizzle would agree it clean, simple, informative and well updated what more can you ask for, check it out at www.topheringalls.com  I contacted an industry insider to get you the readers some inside information, my source is to remain confidential.  What can you tell me about Topher Ingalls? “His bike is rad looking” end of quote.  Good luck to Topher in the remaining rounds and if he can get into the main event he will no doubt be rewarded with copious amounts of press from every corner of the pulpmx media empire, some well deserved press.

Goerke just got off the boat or plane or however that analogy goes, and is back from conquering Europe and winning the Germany SX Cup.  If history has taught us anything about the German SX series it’s that the riders that have conquered it in the past (JT$-Ironman of SX) come into the Monster Energy Supercross series already warmed up and guns a blazing.  Beef has had stand out rides in the past, his win at Southwick is obviously nothing to shake a stick at but I don’t think of consistency when I think of Beef.  Beef is something you want to be consistent, after having really good Beef it leaves you craving more (i.e. Southwick) opposed to having really bad Beef it leaves you with an empty feeling (i.e. LA).  The nickname Beef couldn’t be more fitting for Goerke and it’s nice to see a rider with a nickname that had a little thought go into it unlike the now all too common habit of RV2, RD, JS7.  Hopefully Beef is the beginning of a new/old era of giving riders relevant nicknames like the good old days of Hurricane, Flying Freckle and Showtime.  It only seems fair to mention that Georke appears to also have a website, but it’s the complete opposite of Tophers, for Beefs sake I hope it’s not ran by him and I’m not going to subject you to the site link.

Let’s address this Sexy Devil gear business.  I was unable to find the Sexy Devil website and using the google search terms Sexy Devil again got me sidetracked looking at all of the Sexy Devil search results in an attempt to get to the bottom of this.  I’m not a big fan of the orange and yellow but it does make it easier to find Beef on the track.  I hope Beef slips into some different colors this weekend because I like the plain design, some of the current gear is way to busy with designs and looks cool up close but on the boob tube from a distance it looks horrible.  The naked devil lady on the front is a little scary and reminds me of Salma Hayek in the movie From Dusk Till Dawn.  My industry insider provided me with this insight, what do you think of the gear Beef is wearing “it’s from Europe in case you didn’t know” end of quote.  In my expert opinion Beef will force his way into the main event in the near future he might not make all of them but there’s no doubt the current Germany SX Cup champion will slip in there.

Thanks for reading this Short recognition of the guys that almost made it. See you next week. Moser

Please send any pictures of Justin Brayton and/or complaints about this column to jasonw@racerxill.com