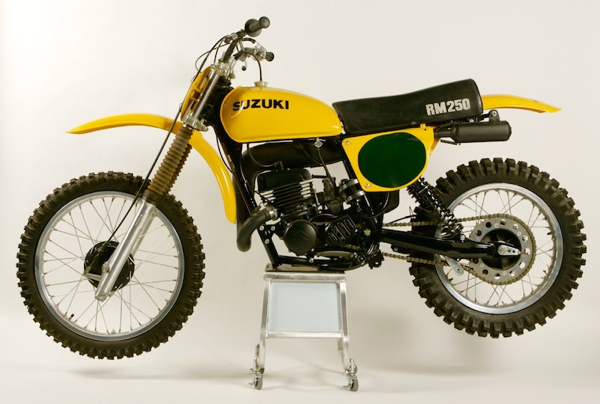 For this week’s Classic Steel we are going to look back at the last of the alloy tanked Yellow Zonkers, the 1978 Suzuki RM250C.

For this week’s Classic Steel we are going to look back at the last of the alloy tanked Yellow Zonkers, the 1978 Suzuki RM250C.
By: Tony Blazier

Throughout the first half of the seventies, Suzuki lacked a credible production motocross racer. Their TM line was a pale imitation of their awesome works bikes, panned by critics and riders alike. All that changed in 1975, when Suzuki debuted the first of their incredible RM race bikes. The new RM’s were light years better than the TM’s had been, and competitive race bikes right out of the crate.  The RM250-A and its successor, the RM250-B were some of the best and most popular bikes available in the 250 class at the time. Their success was not limited to the showroom either. With Tony DiStefano at the controls, RM250’s would capture the 250cc National Motocross title three straight times from 1975-1977. The late seventies and early eighties were a great time to be on a Suzuki.

The 1978 RM250-C is an interesting machine. In 1978 there were actually two RM250’s offered for sale. Halfway through the year, Suzuki came out with what it dubbed the 78 ½ RM250C-2. The 78 ½ C-2 would see upgrades to the RM’s motor and suspension to try and keep pace with Suzuki’s fast moving competitors. The 78-250-C model would be the last of the 1st generation RM’s, which began with the RM250-A. It would be the last to use Suzuki’s iconic alloy tank design (to be replaced with a far less attractive plastic one on the RM250C-2), and make due with a steel swingarm. The race for long travel had begun in earnest, and the switch to the C-2 mid year signaled Suzuki’s desire not to be left behind.

The 78 RM250-C featured a pretty conventional-for-the-time motor. The 246cc air-cooled, two-stroke single used a 67mm x 70mm configuration and reed-valve induction. This was combined with a 36mm Mikuni round slide carburetor and a slightly longer stroke to provide a very torquey power delivery. The ignition did away with the points used on earlier machines, replacing them with a much more reliable, maintenance free, electronic ignition. Putting power to the ground was a smooth shifting five-speed transmission.

For ’78 Suzuki focused on making the fast, but hard-to-ride RM250-B motor easier to manage. They increased the volume of the transfer ports, revised the ignition and reshaped the expansion chamber all in the hopes of giving the bike more low-end torque. The result of all this massaging was a powerband that focused its power much lower in the power curve than previous RM 250’s.

The RM-C came out of the hole with a strong blast of torque right off idle. From there, the power would pull strongly into a solid mid-range hit, before tapering off as rpm’s rose. Unlike the RM-B, there was no top-end past the healthy mid-range hit. The C model was best ridden by shifting right in the meat of the torque curve. It was a classic “short-shift” motor. This did not make it necessarily faster than previous RM’s, but it was quicker from turn to turn and easier to keep on the pipe.

On the suspension front, the RM-C was a mix of old and new. The front forks were all new for ’78, featuring the addition of air adjustability. Unlike today, there was no damping adjustability built into forks of this era. If you wanted to adjust the performance, you had to change oil viscosity or volume internally. In the mid seventies, manufacturers began adding schrader valves to the fork caps so riders could add or remove pressure to tune performance. It was by no means a perfect way of adjusting performance, but it could be used to fine tune ride height and compensate for too soft of a spring in a pinch. Believe it or not, this addition was big news in ’78.

The new fork featured 9.8” of travel to go with its enhanced adjustability. This was a full two inches less than the all-new ’78 Honda CR250R Elsinore offered, and quickly looking very outdated. Performance wise, the new fork was regarded as excellent for the time. It provided a smooth, controlled ride and gobbled up most track obstacles with aplomb. It was, however, very sensitive to the air pressure adjustments. With the recommended 20 pounds of pressure in the fork, the ride could be slightly harsh and give the bike a bad case of understeer. If however, you lowered that pressure to 18 pounds, the ride smoothed out and the front-end push went away. It was a good fork, but it needed to be properly set up to get the most out of its performance.

In the rear the picture was not quite as rosy. The laid down “Tru-Trac” shocks provided a decent, if not overwhelming, 8.6” of travel. Again this was far less than the Honda and Yamaha had in ’78. They were simple, non-adjustable gas/oil units, featuring small remote reservoirs on each shock. As delivered, they were set up with too stiff of a rear spring and too much rebound damping. They worked well on big jumps and hard hits, but deflected off smaller obstacles. If faced with successive bumps, they would tend to pack down and after about the forth hit start swapping side to side. They were considered pretty bad even in 1978, and since there was no real way to alter their performance, most serious riders just replaced them with aftermarket units.  This was one of the issues addressed by the 78 ½ RM-C2 with its much improved shocks and increased suspension travel.

These early RM’s were not particularly light machines, clocking in a over 230 lbs. That actually seems like a lot if you look at how little motorcycle is there. Even though there are no radiators, power valves, or big beefy frames, the use of low grade steel and heavy components made these bike actually heavier than their modern equivalents. On the bright side, even though the RM was slightly overweight, with proper set up they were good handlers. Turning was not quite up there with the best bikes of the day (it would take a few more years for Suzuki to earn its reputation for unrivaled turning), but it would hold an inside line if the rider kept his weight forward. Stability, however, was very good with an inch longer wheelbase (57.1 inches) than the ’77 model and very little headshake. The only real chinks in the RM’s handling repertoire were its recalcitrant shocks, which could kick the rear sideways at unexpected moments.

The 1978 RM250-C is a bit of an oddball. It was a bike that was rendered obsolete only a few months after its introduction. The ‘78 ½ RM250-C2 featured a better motor, better suspension and better handling. The RM-C on the other hand, was little more than a souped-up ’76. In spite of its shortcomings, the RM250-C was an excellent motorcycle. It may not have had the most suspension travel, but it was a very good race bike. It handled well, was fast and was easy to ride, plus it had good forks and was reliable. That was a combination that won Suzuki a lot of races in the late seventies.