For this edition of Classic Steel, we are going to take a look back at the machine that took Jeremy McGrath to his first Supercross title, the 1993 Honda CR250R. 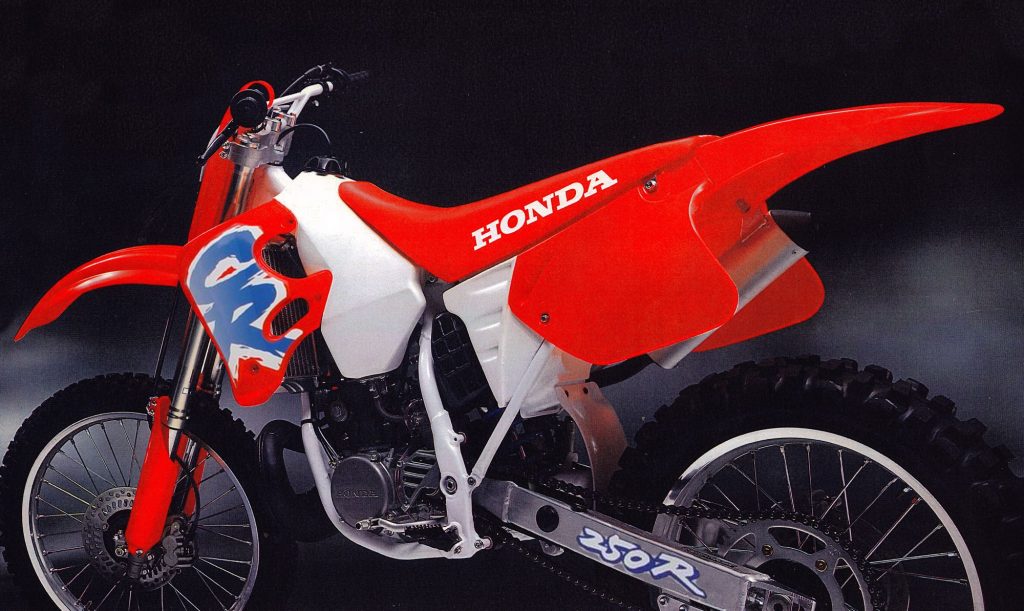 In 1993, the Honda CR was the fastest 250 money could buy. Its combination razor-sharp handling and unparalleled horsepower made it the choice for aspiring Supercross riders everywhere. Photo Credit: Honda

The 1993 CR250R was the second year for Honda’s latest deuce-and-a-half offering. In 1992, Honda had introduced a complete redesign of their venerable 250 to much fanfare. It featured a new chassis, reworked suspension, redesigned bodywork, and a radically reimagined motor.  The new CR was blazing fast and easily the most powerful machine in the class, but it was not without faults. The new motor, while fast, was far less easy to manage than previous Honda offerings and the suspension continued to be harsher than the competition. The new chassis also suffered from excessive flex and stress fractures appeared on the swingarms with use. Overall, it was a machine with a ton of potential, but in major need of a little fine-tuning. 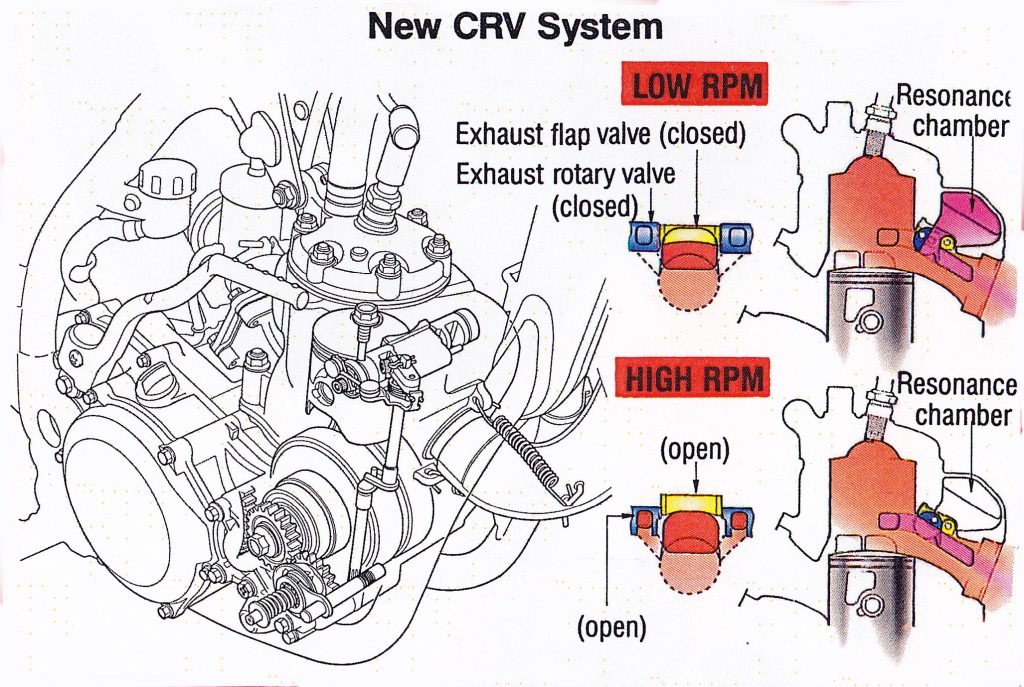 In 1992, Honda replaced their award and title-winning HPP motor with an all-new design that offered easier maintenance and a more aggressive character. The new CRV (Composite Racing Valve) design would power Honda’s 250-class racers into the next decade. Photo Credit Honda 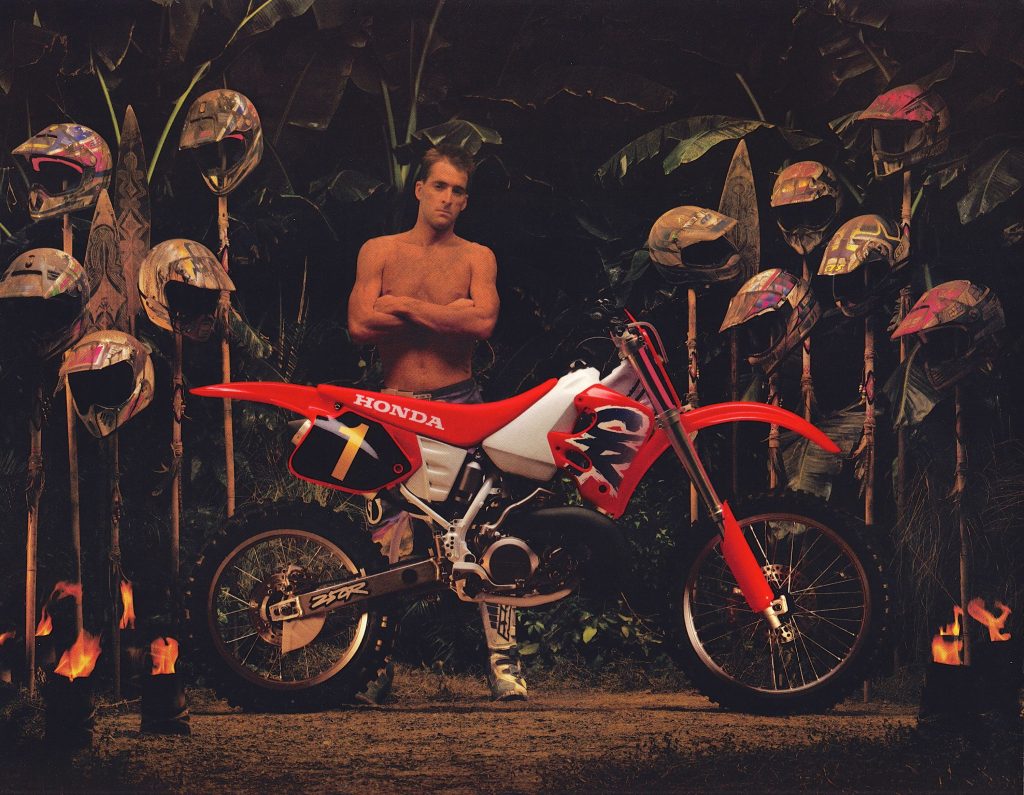 Coming onto 1993, most oddsmakers had their bets on another Jeff Stanton vs Damon Bradshaw showdown for the title. Unfortunately for Stanton, the Moto Gods had other plans in mind. Photo Credit: Honda

For 1993, Honda looked to alleviate these issues by beefing up the frame and reworking the swingarm. The motor was also massaged to smooth out the midrange hit and broaden the powerband. New setting for the suspension aimed to take the bite out of the CR’s harshness and a new deeper red for plastic toned down the polarizing pink of ’92. 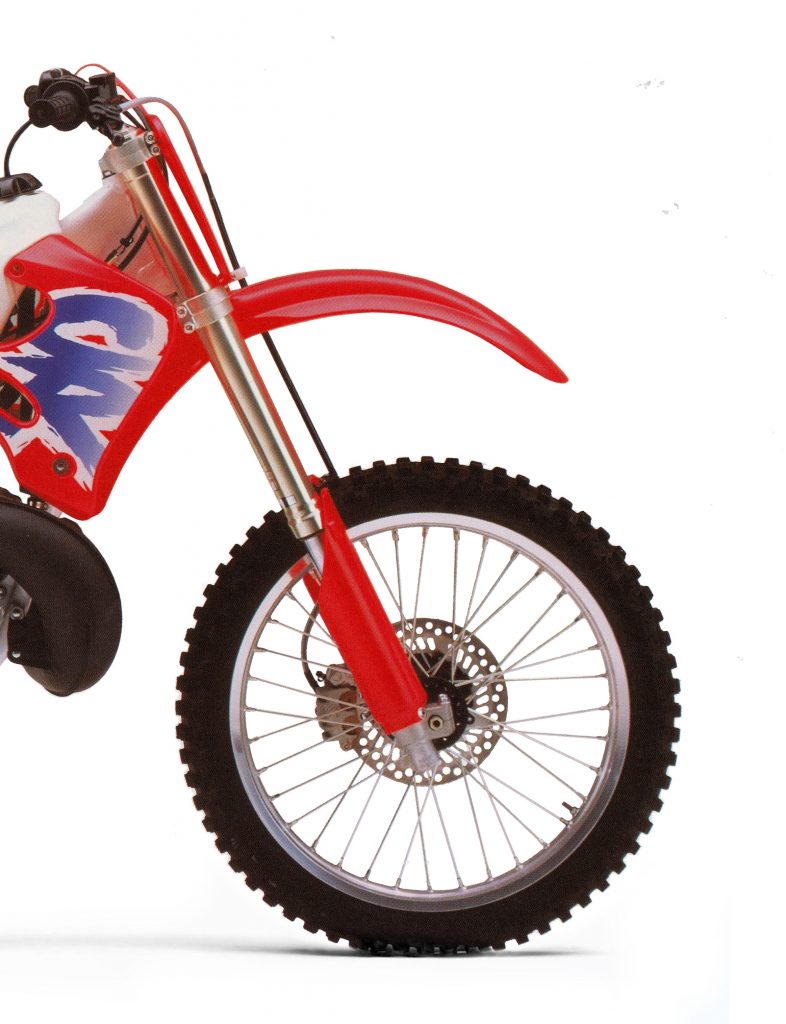 If you have ever seen the movie Groundhog Day, you know what it was like to buy a Honda CR in the early ’90s. Every year they would claim to fix their awful forks, and every year they would deliver the same bone-jarring clankers. These Showa pummelers were under-sprung and poorly damped. Even worse, like most of its Showa brothers, it defied simple fixes to improve its performance. A complete re-valve was the only way to sort out the abysmal action. Photo Credit: Honda

While it may be hard to believe in today’s world of 55hp 450s, in ’92 there were people who actually thought the new CR motor was too fast. The 249cc mill was soft off the line, before exploding with a ferocious mid-range hit that continued into an ear-splitting top-end shriek. It was blazing fast, but harder to ride than the ’86-91 HPP motors had been. For ’93 Honda changed the reed-valve, modified the intake track and reworked the airbox to punch up the low-end on the fire-breathing mill. The result of all this fine-tuning was a kinder, gentler Hot Rod for ‘93. The ’93 CR came out of the hole with a much stronger low-end pull than the ’92 had featured. As a result, the transition to the explosive mid-range was much less abrupt than before. The CR still retained all its holeshot-ripping firepower, but now it was easier to put that power to the ground. 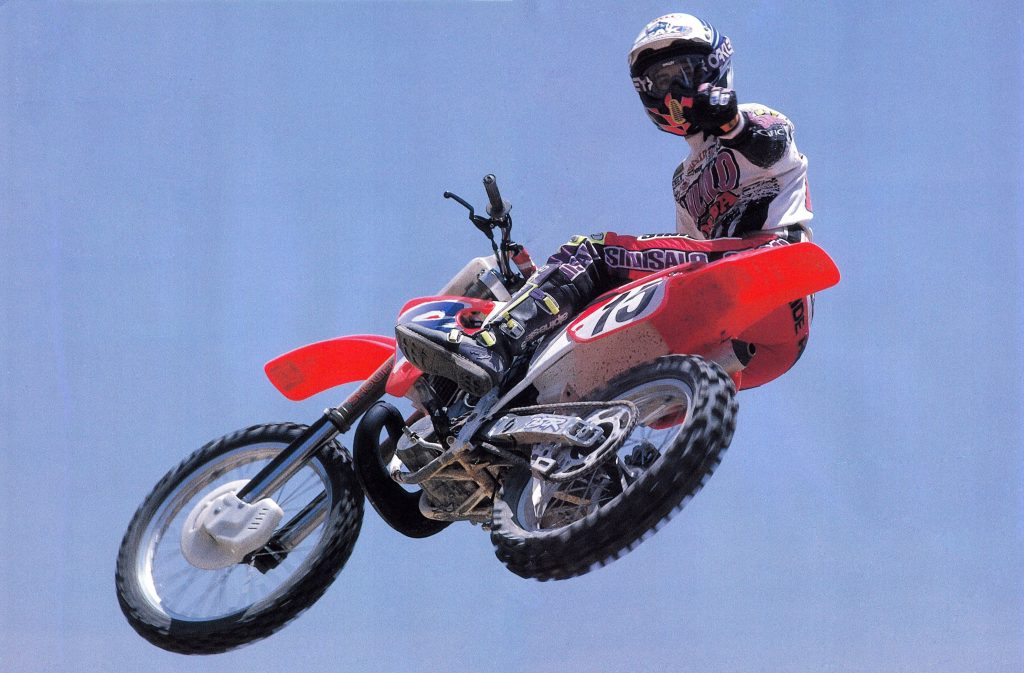 In the hierarchy of ’93 250 powerbands, the Honda and Yamaha produced the broadest spreads of power. Only those two made significant power in all three phases of the curve.  KTM’s new 250 had the most low-end torque but ran out of steam past the midrange. Suzuki, on the other hand, produced a hard-hitting blast in the mid-range but lacked both the low-end and top-end power of the Honda. Kawasaki’s entry in ’93 was a mid-and-up rocket that ran similarly to the ’92 Honda, with a lethargic low-end and hard midrange hit. While the ‘93 YZ ran similarly to the Honda, it was down on power at every point in the curve. With both the most outright power and broadest spread of useable thrust, the CR was the unanimous choice for the best motor of ’93. 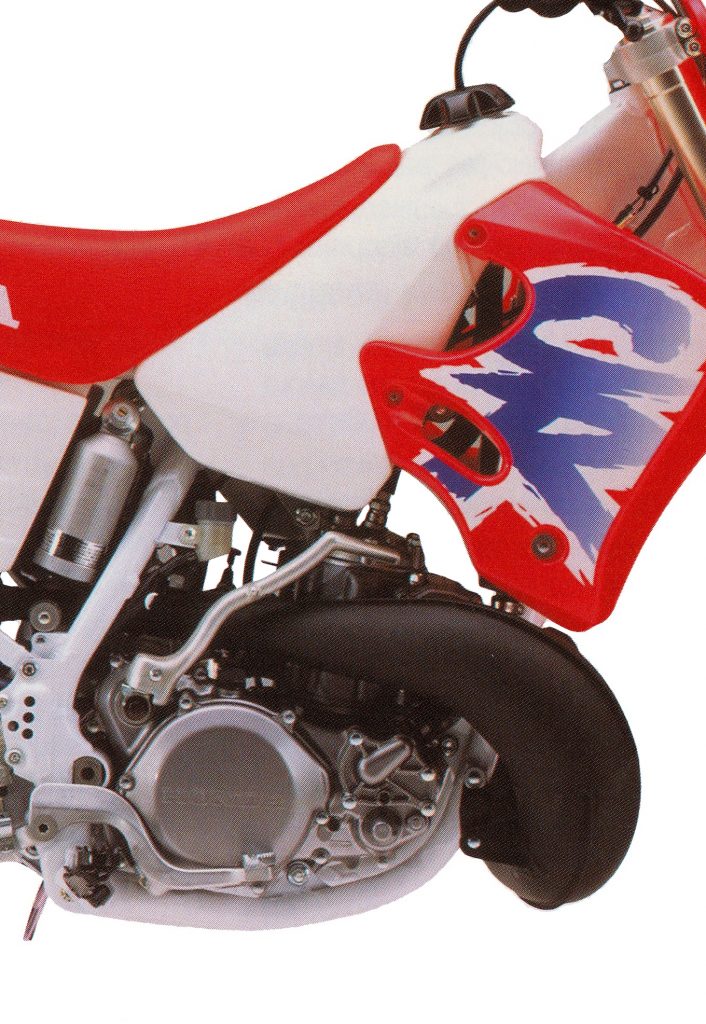 The 249cc mill on the ’93 CR pulled strongly from the first crack of the throttle, all the way until the rev limiter kicked in. It was broad, burly and badass. Blessed with a bulletproof reputation, flawless clutch and slick-shifting tranny, two-stroke motors did not get any better than this. Photo Credit: Honda

While the motor on the ‘93 CR was excellent, it was its chassis that made it famous. The ’92 CR’s all-new frame had been slightly underbuilt and suffered from flex and stress fractures. To combat this, Honda beefed up the CR’s frame tubes by 5% and strengthened its crack-prone swingarm. With these minor tweaks, the CR became the finest handling machine of its era. The ’93 CR was the absolute master of the inside line, it could carve underneath any other bike on the track with ease. Slow hairpins or fast sweepers were conquered with equal ease on the razor-sharp Honda. Its only handling weakness was its nasty headshake under braking. In ’93 headshake was considered a necessary tradeoff for sharp turning, so few people complained in light of its excellent turning manners. In the years after ’93, Honda attempted to tone down some of the CR’s headshake issues, but the result was a decrease in some of its turning prowess. To this day, the ’93 CR is considered by many to be the pinnacle of Honda 250 two-stroke handling. It was so good in fact, that Jeremy McGrath continued to use a ’93 chassis on his works Honda’s every year until the switch to aluminum in 1997. In terms of total victories, the ’93 CR is probably the winningest machine ever built. 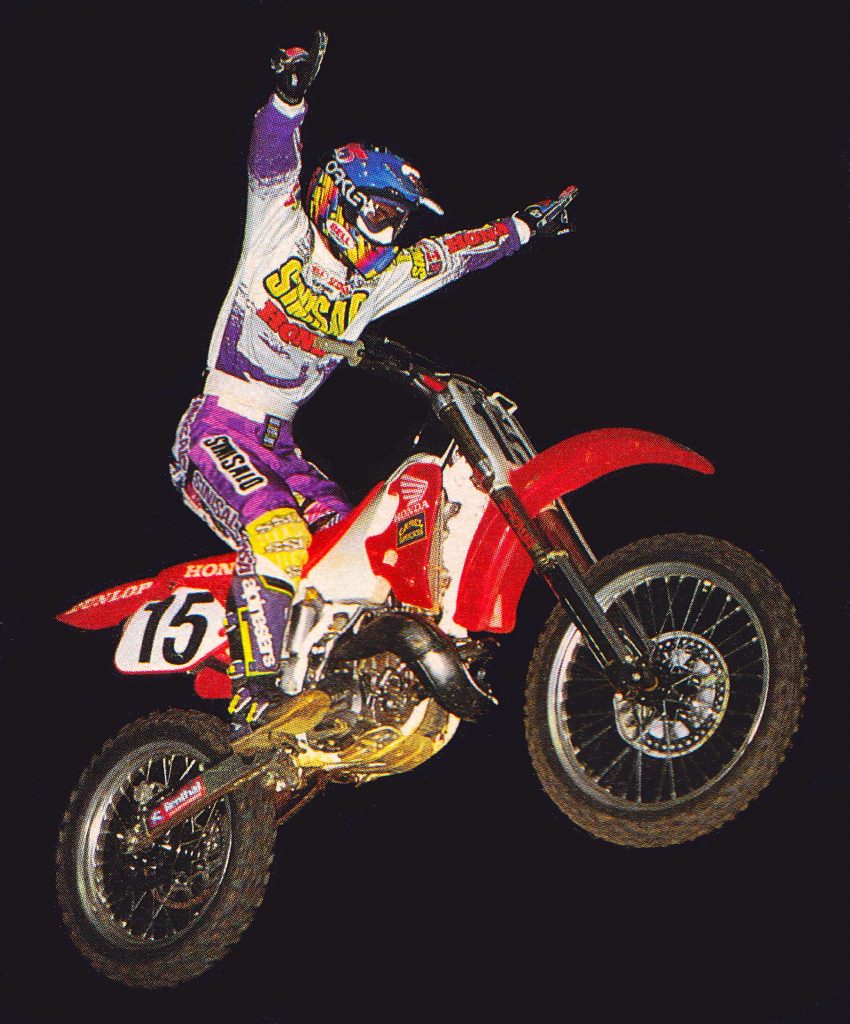 Jeremy McGrath loved the handling of the 1993 chassis so much that he continued to use it for the next three years on his way to three more AMA Supercross titles. Photo Credit: Fran Kuhn

So was the ’93 CR250R the best Honda ever built? Actually no, in fact some would say it was not even the best overall bike available for sale in 1993. Like so many Honda’s before and after, the ’93 CR250R was let down by its terrible suspension. Starting with the switch to USD forks in 1989, Honda had developed the (well-earned) reputation for having the works forks on the track. Year in and year out, the upside-down Showa’s were hopelessly set up and punishing in action. By 1993 this was becoming a bit of a Honda tradition, and no one was surprised when once again Honda delivered sub-par forks on the new CR. 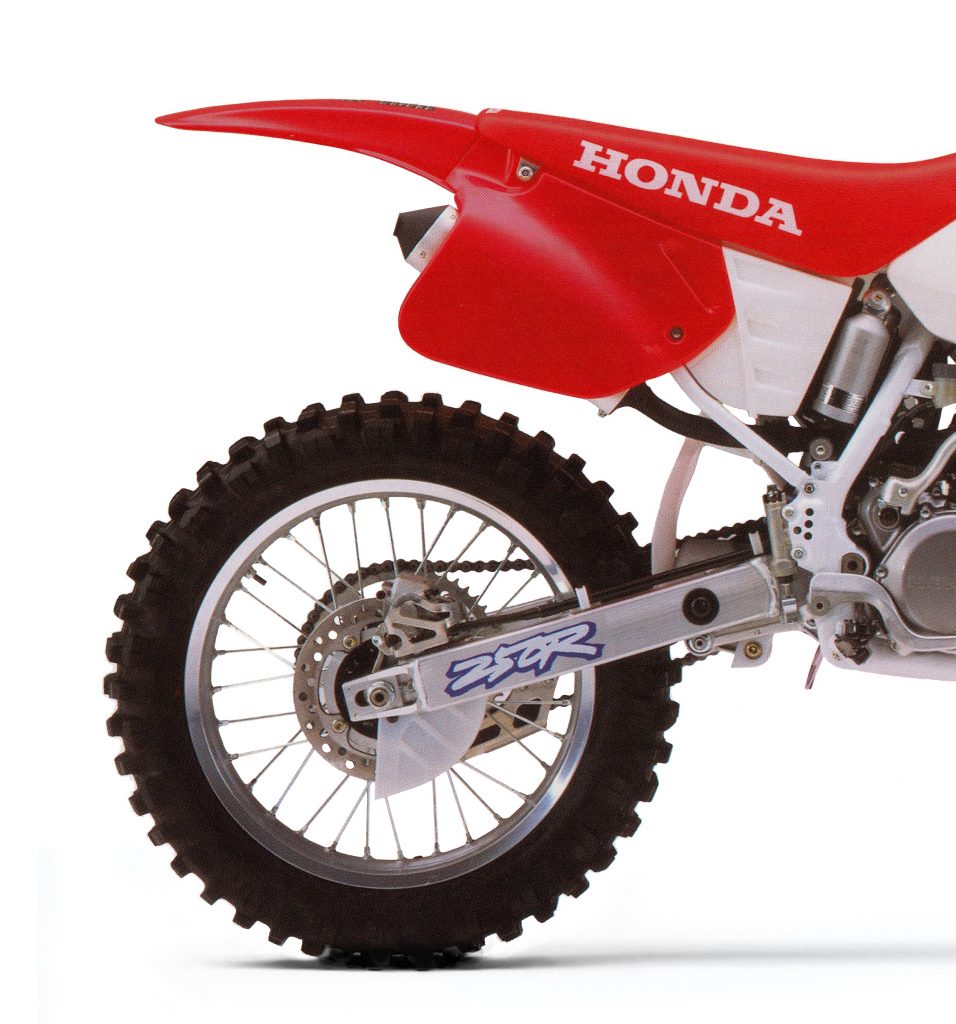 The Showa rear shock on the ’93 CR250R was nearly as poorly set up as its forks. The valving in the shock was badly suited to the rising rate of the linkage and would blow through the stroke on hard impacts. Adding to the misery was its lack of compliance on small chatter and braking bumps. Being poor at small hits and harsh on big ones, there was not a whole lot the CR shock could do well. On the bright side, the brakes on the Honda were world class in power and feel, far outclassing the CR’s competition in ’93. Photo Credit: Honda

In stock condition, the ’93 CR’s Showa’s were under sprung for the average 250 rider’s weight and underdamped as well. Even with stiffer springs, the forks would blow through the stroke and hammer your hands on big hits. If you raised the oil level to combat this, then they would become extremely harsh and unforgiving. They were harsh on small stuff while also being too soft on big hits. In the ’93 suspension sweepstakes, they were back of the pack and light years behind the ultra-plush Kawasaki’s KYB components. 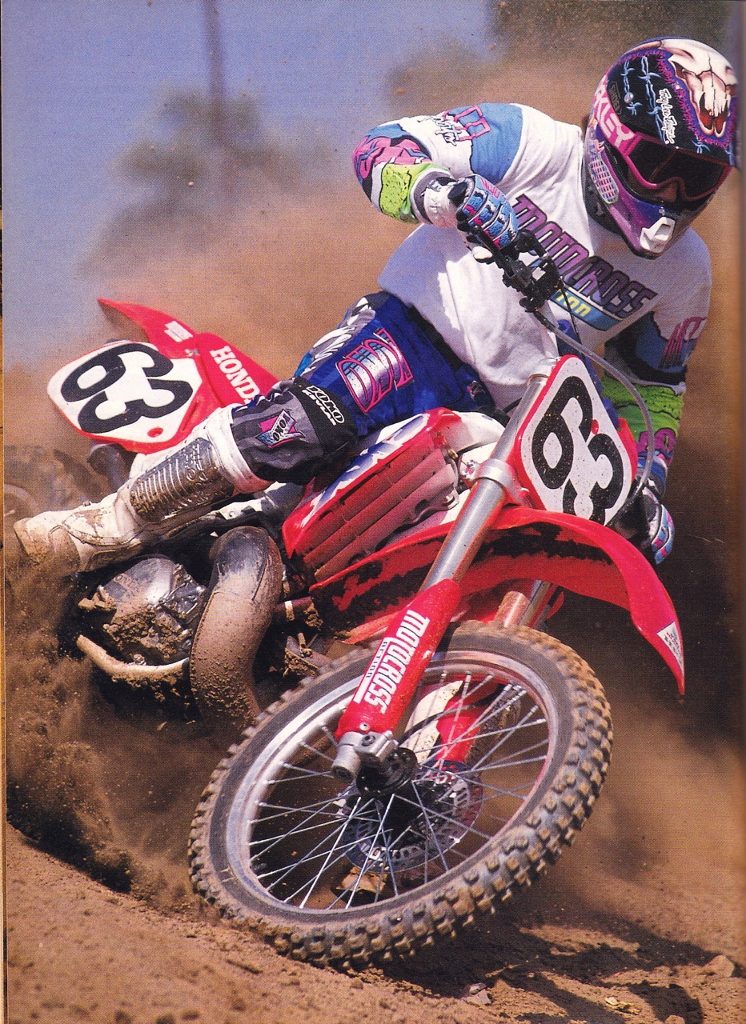 Motocross Action was a big fan of everything about the ’93 CR but its craptacular suspension. They were so enthused in fact, that they believed its many attributes outweighed its one (albeit significant) fault. Even though it was far from perfect, the CR250R was good enough to claim MXA’s coveted Bike of the Year award in ’93. Photo Credit: Motocross Action

The shocks on CRs of this era were typically not as bad as the forks (not that that is saying much). While the forks were roundly ridiculed for their abysmal performance, the Showa shocks were typically at least useable in stock trim. The ’93 CR250R continued this tradition by offering a shock that was marginally better than its gruesome forks. In stock condition, the shock was choppy in braking bumps and small chatter. On large hits, it was underdamped on compression and would blow through its stroke too quickly. With careful set up the shock could be made raceable, but like the forks, a revalve was necessary to get the most out of the Honda’s chassis. In terms of ranking, Honda’s shock fared better than in the fork ratings. The CR was rated higher than the confused Suzuki and hopeless KTM, but far behind the excellent Yamaha and Kawasaki. 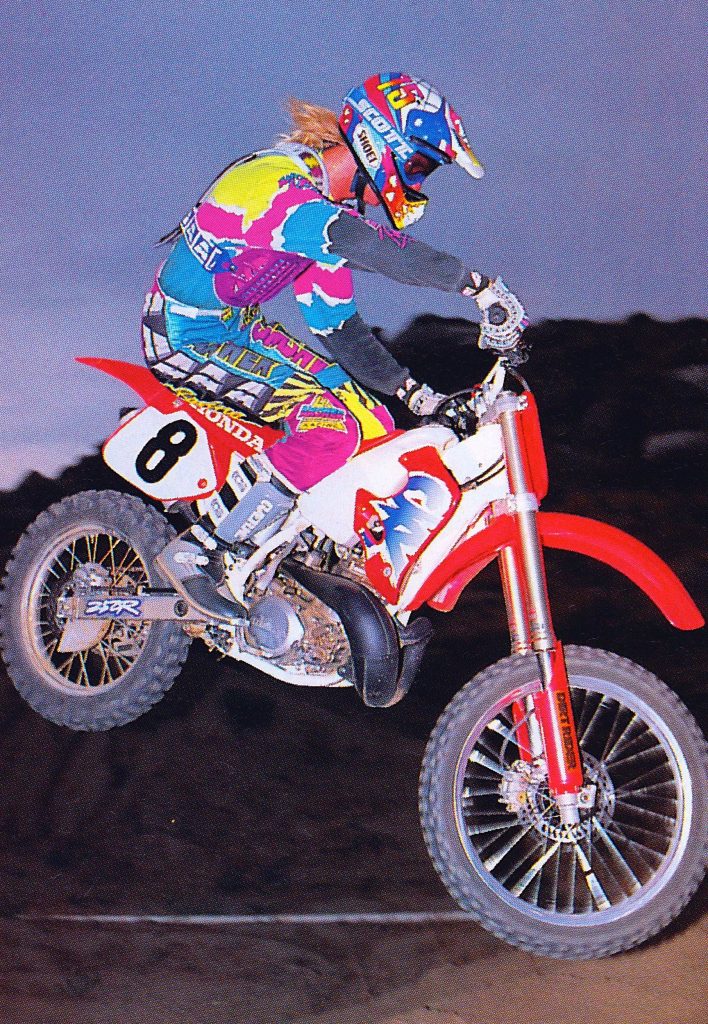 With a light feel, powerful motor, and excellent ergonomics the ’93 CR250R was an able flyer in 1993. Photo Credit: Karel Kramer

Aside from its disappointing suspension, the CR was the class of the field in ’93. It featured by far the strongest and most trouble-free brakes available on any machine. The CR’s ergonomics were roundly praised for being the most comfortable of any bike, with a plush seat and slim layout. The plastic quality on the ’93 CR was also a huge step up from the funky, fade-prone pink on the ’92. Best of all, the Honda was completely bulletproof, with a nearly indestructible motor and high-quality components throughout. If you bought a Honda CR, you knew you were buying the best built, longest lasting bike on the track. 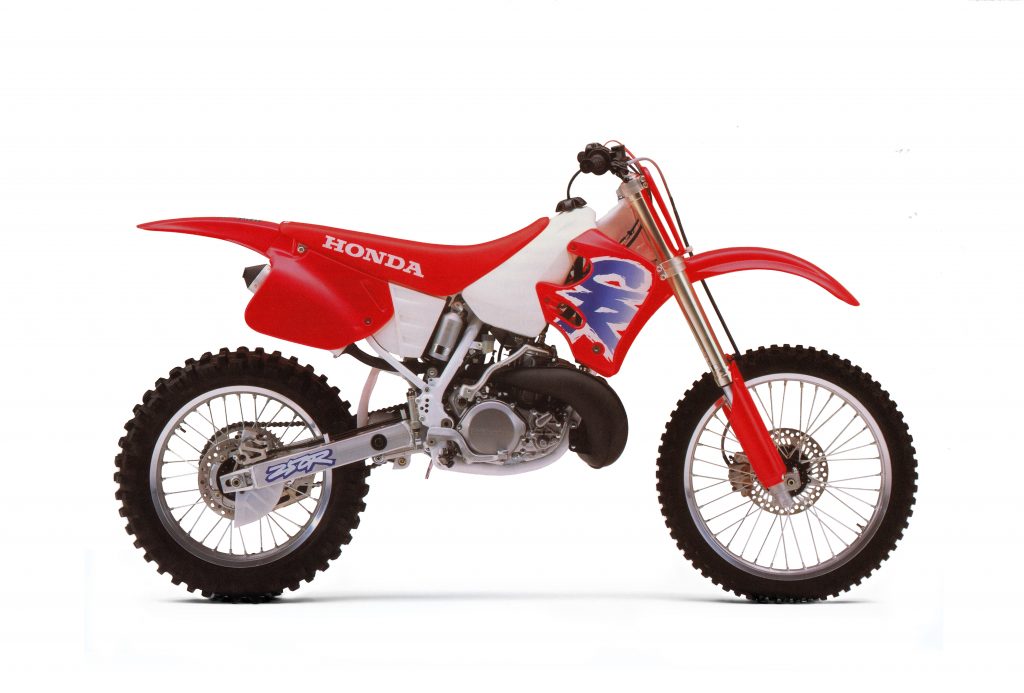 Stop me if you have heard this before…Honda produces a rocket fast machine, with a space-age motor, married to stone-age suspension. Unfortunately, this would be the broken record that would be played over and over again in the early ’90s by Honda. Photo Credit: Honda

The ’93 CR250R was a Ferrari Enzo, saddled with Ford Pinto suspension. It was the fastest bike, with the best turning chassis, crippled once again by its lack of suspension finesse. In Dirt Bike’s ’93 250 shootout, the CR250R lost out to the good-at-everything, but best-at-nothing Yamaha YZ250. It lacked the CR’s razor-sharp turning and rocket ship motor but made up for it with an easy-to-use powerband and excellent suspension. It had all the bases covered in ’93 and won out over the fast-but-flawed Honda. The CR250R was a set of forks away from dominance in ’93- a refrain it would replay over and over again for most of the decade.