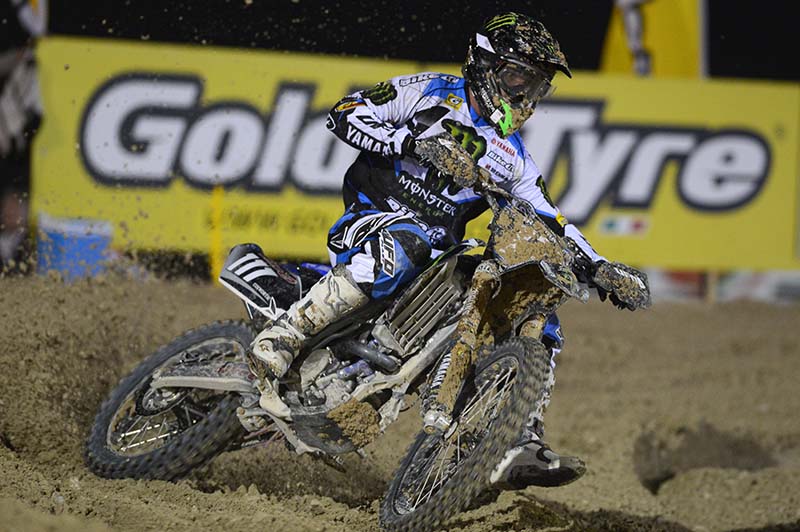 A new venue with a new format brought with it some exciting racing on a difficult track.

But before we get to the much talked about Superfinal lets looks at the opening MX1 and MX2 motos.

In MX2 Jeffrey Herlings was magically recovered from his leg injury. He took the led from his countryman Glenn Coldenhoff on lap three and checked out to an impressive thirty second win.

Behind him the battle raged between Coldenhoff, Frenchmen Romain Febrve, Christophe Charlier and Valentin Teillet.

Suzuki’s Max Anstie was amongst it too but crashed out hard and was forced to the LCQ.Teillet would join him there after a mechanical leaving Coldenhoff to hold of Charlier and Febvre for second.

Febvre dropped off the pace late in the race as Charlier pressured Coldenhoff right to the end but just could not find a way through. Coldenhoff crossed the line for his first ever top three and made it a Dutch 1-2 on the process.

Another man who had an impressive ride was Aussie Dean Ferris in fifth on the Dixon Yamaha in his debut ride in the MX2 class.

MX1 was a battle! Kevin Strijbos holeshot and was leading a four way battle with De Dycker , Desalle and Bobreyshev on his tail. Then, in crazy one lap, Strijbos dropped to fourth as the trio sped past.

De Dycker now led but Desalle made a cracking pass round the outside to surprise Ken and slowly but surely pulled away to win the first moto of the year.

World champ Cairoli got off to a mid pack start but eventually moved up to third passing Bobreyshev. The Russian slipped to fifth by the flag after Gautier Paulin followed Cairoli through and finished fourth.

The LCQ saw fast Frenchan Dylan Ferrandis miss out on the super final as Valentian Teillet and Max Anstie got the MX2 transfer spots with Jene Gettemen and Jason Dougan getting the last two places for the MX1 class in the superfinal.

The top twenty MX2 riders went onto the line first with the MX1 riders filling out the remaining twenty gates as the tension and expectation reached an all time high.

The 450s out powered the smaller 250 machines but having the inside gates meant the start wasn’t a big disadvantage for them as Herlings came out in the top five.

Desalle quickly got into the lead with Cairoli this time right on his tail as Herlings tried everything to pass Strijbos.

Eventually both Paulin and Searle would get Herlings who would finish a fine seventh and win the MX2 class.

Up front Cairoli, who has just signed a new three year deal with KTM, pushed Desalle wide to take the lead and then whipped it over the next jump just to let Desalle know who the King of Grand Prix racing was!

Desalle couldn’t retaliate as Cairoli took the win of the first ever Superfinal but it was the Belgian who won the MX1 class overall and left as the early championship leader.

Desalle said: “It is a good feeling to start the season with the red plate but it doesn’t mean so much because the year is very long. I have always said that when I have fun on my bike, then the results go well and that’s really important.

Gautier Paulin came on strong at the end of the race to nab third from Bobreyshev with Searle riding better in race two for fifth.

Behind Herlings the next best MX2 bike was the Yamaha of Dean Ferris, The Aussie was thirteenth in the race and second in his class giving him second overall in his first ever MX2 GP.

Ferris was the first Australian to podium since the late great Andrew McFarlene who also did it with Steve Dixon’s team and the moment was not lost on Ferris, who could prove a real contender this season.

“I was excited out there, battling all those 450s,” explained Ferris. “I’m well aware that Andrew was the last Aussie rider up here and he also did it with Steve (Dixon, Team Manager) so that was nice. I think the Yamaha is definitely the best bike I have ridden for any team that I’ve represented. The guys put in a lot of work to make it the best and that gives me a lot of confidence.”

Third overall was another fine performance this time by Romain Febrve. The Frenchman backed up his first moto fourth with a third in the Superfinal  (sixteenth overall) to make his first ever podium – and it won’t be his last. As expected Febvre has jumped up a level this year after joining the Jacky Marten KTM team and he will give teammate Jake Nicholls a run for his money all year!

Glenn Coldenhoff and Christophe Charlier rounded out the top five overall and both will be happy with starting the season strong.

So, was the Superfinal a success?

Yes and no. The race itself is very exciting due to the fact there is always something to watch with two races in one. Herlings battling the top MX1 riders is also really entertaining and to see the best of the best all in one race makes it an incredibly talented line up.

However the TV coverage of the MX2 riders needs to improve and the podium situation at the end caused a lot of controversy.

Even though it was Clement Desalle who won the MX1 class overall it was Antonio Cairoli who stood on the top step of the podium because he won the Superfinal. Jeffrey Herlings was the only MX2 rider to get on the podium as he joined the top three Superfinal finishers because he was the MX2 class winner.

That meant second and third overall Dean Ferris and Romain Febvre were nowhere to be seen which will not impress the team or sponsors at the lack of TV exposure for getting their first ever podiums.

The problems seems to be instead of just celebrating the MX1 and MX2 class overalls based on the superfinal results they are also trying to market the Superfinal as a one off main event. As a consequence people are not really sure what the main focus is at the end of the race.

Youthstream are focusing on the superfinal race results whereas the team and riders are focusing on the overall individual class finishes and the fans are caught in the middle.  Everyone needs to be on the same page for it to work more smoothly in Thailand.

Once the teething problems are sorted out in the presentation and TV coverage there is definitely potential for the format to be successful, but whether the teams would want it for every round instead of just the four fly away races (as it is this year) is another question.

The decision to go to Qatar and have a night race to launch the season was very interesting and overall successful – the track looked great under the lights and the images from the photographers make the sport look really cool. It also brought exposure to a new audience and a new TV contract with Al Jazzera is definitely proof that motocross is expanding worldwide.

All in all it was an exciting race weekend with plenty of surprise performances to wet the appetite for the season.

Clement Desalle looks back to the form that he had in 2011 and with Gautier Paulin also looking very good this season Cairoli will not have it all his own way.

In MX2 Herlings is doing what we thought but the riders behind him are raising their level this season and it is making for unpredictable racing.

The teams now all head to Thailand for this weekend’s race, it’s another new country for the series and new track to adapt too. With another Superfinal on the cards it will interesting to see if the MX2 riders can get closer to the top five and if the podium confusion can be eradicated.