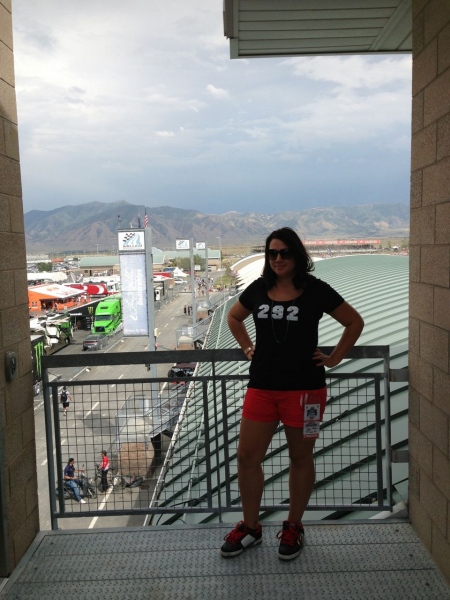 Guess who’s back? After a 5 year hiatus I decided to make my return to the national series. I went to Salt Lake City for Supercross this past April and it was so beautiful there that I decided it would make a great place for my return. I also heard that there was an air-conditioned press area which made me even more happy. I was pleasantly surprised when we arrived at Miller Motorsports Park to find a cement pit area and no dirt or grass! Although we arrived at the track around 7am the day went by surprisingly fast. I did manage to snap some photos to share with you.

After the races are over I get to wait for Steve to walk seemingly aimlessly through the pits to get scoops, goggles and interviews. To all of you that listen to those post-race pulpcasts, I was light headed from starvation but at least you got to hear Justin Barcia’s take on the race! While saying bye to Allan Brown I saw Filthy Phil Nicoletti who gave me hell for not sporting my Filthy Phil shirt that he sent me. I informed him that I flexed and the sleeves fell off but I still like to wear it to the gym because it puts me in a bad mood which he is usually in. Perfect for pumping iron.

I also got some flack from Zach Osbourne who saw me after the race and said “Oh so it was YOUR fault”, referring to Adam catching him right at the end of the 2nd 250 moto. Looking back on the day I never once set foot on any dirt which I probably should have to authenticate the experience but hey, at least I kept my 22 Etnies clean! Thanks to PulpMX for footing the bill and allowing me to tag along. Until next time, bros. ELE.