Tell Us Another Story, Jason Thomas 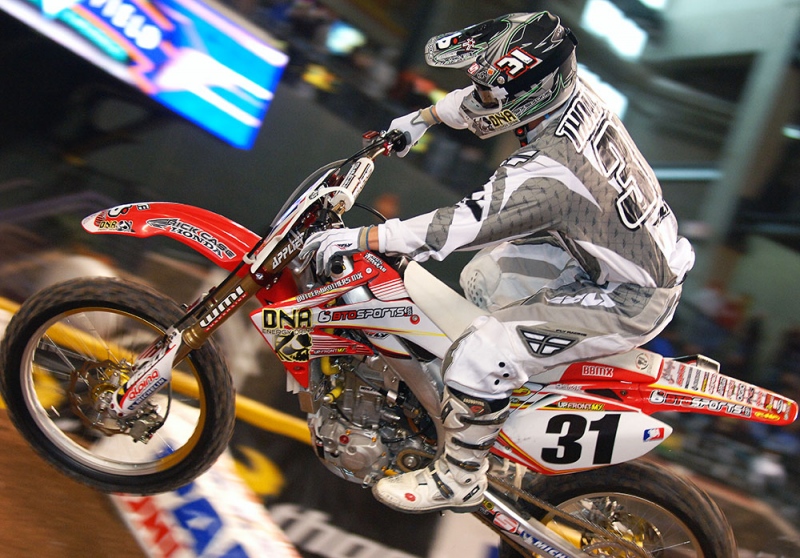 Some entertaining thoughts from Thomas on his race

Some entertaining thoughts from Thomas on his race

“This picture is from the year 2007 at the Phoenix Supercross. It was my first year on the Butler Brothers MX team which is now what we know as BTO/KTM. The team was growing quickly at this point and we were still trying to get the bikes up to a higher level. I was coming off a few strong years in a row with a different team and had high expectations for 2007 as a whole. Unfortunately, we struggled with getting the bike dialed in for me and supercross was a bit rough and tumble. We tried a set of A kit suspension but had no settings for it and paid the price for a month or two of poor results. We finally went back to the production setup and my results turned around somewhat but that stretch really defined the supercross season for me. I look back at that year and remember feeling letdown in myself and just not happy with where we were on the bike as well. We learned a lot, however, and it made for a much better 2008 season.

This race itself was actually not too bad. We were still on the production setup and I was confident that I was a top 12 guy coming from 2006. I remember I had to go through the LCQ (shocker) and made a few crazy passes to get into the last spot. There was a massive rhythm section on this track that everyone was actually jumping 4 instead of the typical 3. This was the main line for everyone that was brave enough during practice. It was the biggest jump in a rhythm section I have ever seen at a race and many guys just opted out of it altogether. As the day wore on, a few guys started changing their strategy and found a 3-3-3 line that was even faster. I picked up on this line and this was one of my strengths, jumping things that most guys just wouldn’t do. I made all of my passes here and the last rider I passed was Eric Sorby, no easy task. I remember getting by him and then sprinting for a lap in fear of him going for the jugular in the next turn. Luckily I made it into the main event and kept the LCQ legend alive!

In the main event, I put in a typically mediocre ride and ended up 14th. I had a pretty strong battle with Jeff Gibson and Antonio Balbi and snuck by both of them before the finish. Looking back at the results, I feel that I should have been at least 12th but that was just a tough year for the #31 Honda. I am happy the BBMX team stuck behind me through the rough times as we had some decent results over the years and really built a lasting bond beyond our 20 year friendship. It’s easy to look back and see the mistakes but when I was in the moment, there seemed to be no simple answers. Motocross careers are full of ups and downs but the bad memories are still what makes this sport so great.”