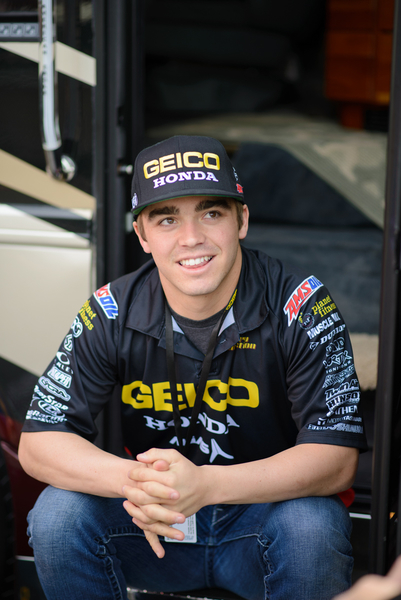 Moser and I hash out what’s right for Zach Osborne

Moser and I hash out what’s right for Zach Osborne

Moser: The Motocross Des Nations is only a short time away and with it’s return every year also comes my renewed Team USA pride.  Like most Americans I bleed red white and blue, I proudly fly an American flag on my front porch, these colors don’t run and insert every other cliche pro America catch phrase you would like.  Zachy Poo has been a member of Team Puerto Rico for a handful of years now due to some loophole about it technically being a commonwealth and unincorporated territory of the United States. (thank you Wikipedia for the correct terminology).  Well this year he declined to rider for his adopted country (let’s be honest he’s not Puerto Rican) and is going to be riding for the red white and blue of his true country USA in the ISDE which stands for the  International Six Day Endruo.  I’m a big supporter of this, for starters hes riding for the right country.  And although I still have a salty taste in my mouth from the many years he has represented his “adoptive” country this is a step in the right direction.

Matthes: Ok Moser, I’m confused here. You’re against Zach riding for Puerto Rico at the MXDN but you’re for him riding the ISDE for America? Wasn’t this supposed to be a Point/Counter-Point about whether Zach should ride for PR at the MXDN or go to the ISDE? You’re not only FOR the ISDE, you’re 100% totally against American’s riding for PR? Which are we arguing about here?

Moser: I’m against the PR team not sending born & raised Puerto Ricans. And against the Americans that have ridden on team PR

Matthes: Thanks for the elaboration. Well it’s perfectly within the rules and did you know that “Bullet” Billy Liles and Trampas Parker have all ridden for the MXDN under Luxemburg, a small country located by Belgium? How do you feel about those guys?

Anyways to my point. Racing the MXDN is a huge accomplishment and a rider should be honored for being chosen. And riding for PR is within the rules of the event so who cares? My point is that Zach, having raced for PR before, should be honored to be chosen to race the Olympics of Motocross that is the MXDN over the ISDE in Italy where a rider has to potentially fight off snakes, gorillas and change his own mousse’s. If you’re an off-road guy then fine, go to the ISDE and sweat your balls off. Osborne’s a motocrosser and he should not be so cavalier about the MXDN. Him and Filthy Phil would make a super-team of my guys and I’m just mad I guess.

Moser: I wanted this argument to be about Puerto Rico fielding a team with only one “real” Puerto Rican. I hear that in the past one of the Puerto Rican’s is a huge fan of riders who race in the USA and was getting autographs while on the line for the qualifying races. You wanted to drag Osbourne into this and his attempt at 6 days of monkey butt and changing his own Moouse’s (if Sarah Whitmore can be taught to change a Moouse anyone can).  There is NO bigger honor than being chosen to represent your country at the MXDN, a better question is who has declined the offer to represent their country (maybe a good tits vs tits question). But I digress it goes without saying if Osbourne had been chosen to represent the USA he would be going, but when Team Puerto Rico comes calling, 6 days of grueling hell in the desert representing USA sounded better to Zach.

The rules or loop hole that allows this is stupid, nobody takes the team seriously, it barely justifies an ehhhh.  Trampas Parker is a badass, one of my favorite podcasts that you have ever done. But Trampas Parker is also an arrogant asshole (it’s part of what made him a great racer) he would go out of his way to stick it to anyone so it doesn’t surprise me he represented another country to try and put it to the man.  Just because our moto forefathers did it doesn’t make it right.

Matthes: Who knew you felt this strongly? You should ask Zach or Top Jimmy who have ridden for PR before- they loved it. Yeah the one actual PR dude held them back from making the A main but they still had a blast. Putting the “I raced the MXDN” check in your column is pretty cool and besides, who really thinks the ISDE is fun? It’s not! It sucks. Yeah, yeah, good for those guys that are going for America and they are all bad-asses (not Zach though, I can’t let him get a big head) and truly, this whole thing boils down to the fact that I’m going to the MXDN and I want to see Zach. There, I said it. You happy bro?

So to get it straight, if you were an American racer and you were asked to go for PR to the MXDN, you would tell them to pound sand? If so, you’d be the only racer I know who would ever do that.

Moser: I’m on a soapbox screaming at the top of my lungs to anyone that will read this that I feel strongly about it.  I’m sure the MXDN is an awesome time, it’s on my bucket list of motocross related events to attend.  I still kick myself for not making the trip in the woody to Colorado to witness Shorty save America.  Osborne and Top Jimmy loved it you say?  Who wouldn’t want an all expenses paid trip to race with the best riders in the world followed by a gratuitous “thank you” trip to Puerto Rico where you get to zip line through trees with monkeys and your wife?  It’s a once in a lifetime opportunity to attend the MXDN so it’s hard to fault guys like Top Jimmy who may never get another chance to go, but this isn’t ‘Nam there are rules and this rule can suck it.  I asked this very question of JT$ in the XBrand tear off segment when Osborne was in studio in an attempt to stir up some controversy “If you were asked to represent team Puerto Rico at MXDN would you?” and he immediately responded “HELL YEAH, I’d a been all up in there swinging Puerto Rican flags”.

So maybe I’m the minority here but I know Kenny Watson agrees with me these colors don’t run.  Here’s some food for thought, Osborne could very well be chosen for Team USA next year, we could have another Dean Wilson country swapping situation on our hands, does anyone care but me?  Matthes you were born and raised in a country with little to no patriotic pride so I don’t expect you to understand.

Matthes: You should see my country when it comes to hockey and the international stuff, you wouldn’t say that about Canada then. But like you said, you’re in the minority here but I like the passion. It’s completely misguided and wrong but stick those guns bro, like Jon Bon says- “Ain’t nobody riding shotgun..”

Bottom line- riding for the MXDN for any country, any chance you get is better than going to the ISDE. Stamp that.