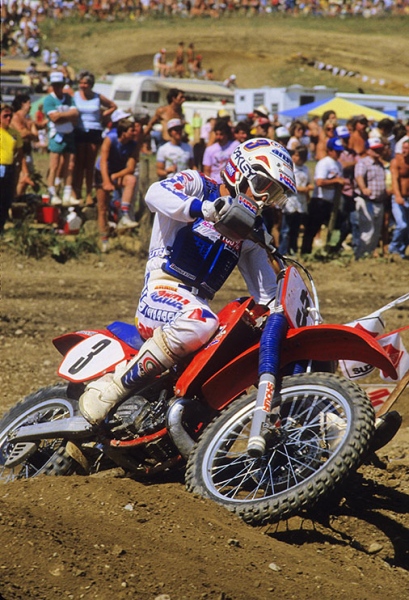 Johnny O’Mara- “I won the 125 national title in 1983 and in ‘84 I finished second to Wardy. So for 1985 it was time to jump up to the 250. Wardy really shined in those years you just talked about. Fortunately I was able to get the better of him a couple times. But then he went on, and we all know what Wardy did. I had some fierce some competitors no doubt. Wardy was right on top of the list there.

That was always my timetable, to get that 125 title and move on. I got it a year before Wardy and then Wardy took it away from me. So at least I got the big class Supercross one and then I was into the big class outdoors. And Honda had Ronnie Lechien so they already had 125 specialists. Even though I dropped down from Motocross des Nations that one year, the following year, it was time. I just moved on and got second in the series behind Ward again. But these photos were from Binghampton and someone else reminded me that I won. I guess I got out front, I was already out front in this one shot, and just put all the rocks on everybody else. Those rocks were brutal at that place.

You know what I kind of remember a little bit about in terms of that ’85 Honda? We had a chassis change on that bike. I think from the get-go I wasn’t totally liking the feel of it. That’s what I kind of recall just right off the top of my head. With that being said, I should have adapted or whatever. I do remember the two-moto format in supercross that year, it was a weird setup. Then I was trying to think, did I hurt my knee already by ‘85? But I think I hurt my knee right in that first or second race of the season before Anaheim ’86, so I don’t want to blame it on my knee at all.

The ’84 bike, when I won Supercross that year in the big class, that one was I think spectacular, but I remember something being changed. It still probably had the full works HRC look and the fuel pump and all that stuff, that we all back then drooled over. But somehow they changed something. We had no excuses; they can change anything. I changed chassis I believe. I can’t remember if I used my 125 chassis or something like that. I made some drastic changes trying to find that comfort feel that I had the year before, but I think I was just behind the 8 ball then, especially with two motos indoors.

Supercross that year, I can’t really totally remember everything about it, but obviously if I didn’t win I’d probably say I didn’t like it too much! That was the year they ran two 12-lap main events and it only lasted one season so I don’t think it was a big hit anyway. I think I was more probably more into having a 20-lap main. I was more used to it. When you throw in the two motos it’s just like too many risk factors. Maybe I had a bad moto here and there and that’s what put me out of the series right away.

I think probably all of us on the Honda team were a little bit bummed when the AMA went away from works bikes for 1986-just because we had such killer stuff in the works department. I don’t want to say my bike was no good in ’85, because I still feel like we had the best machinery out there. But we were probably all, damn, now all the other teams that didn’t run works bikes were going to definitely probably close the gap on us a little bit. But also still our whole personnel and management and engineers are still in place. We had a really gnarly group of engineers in the ‘80s. So our bikes in ’86 were spectacular, from what I remember.

In ’85 it was me, Hannah, Bailey, Lechien all on Factory Honda and that might be the biggest, most stacked team ever. Hannah was unreal in ’85- probably the fastest guy. We were a little bit younger, and you know how it is, the wear and tear on the body, Bob’s body was starting to deteriorate a little bit. But any given day Hannah could win by 20 seconds. I remember he was the old guy but looking back at it, I’m sure he was like 29! I think of that a lot too. I retired in my later 20’s also. You don’t see any guys running into their 30’s at all back then but nowadays it’s commonplace.”

Scott Motorsports: An Honest Look at the 450SX Points