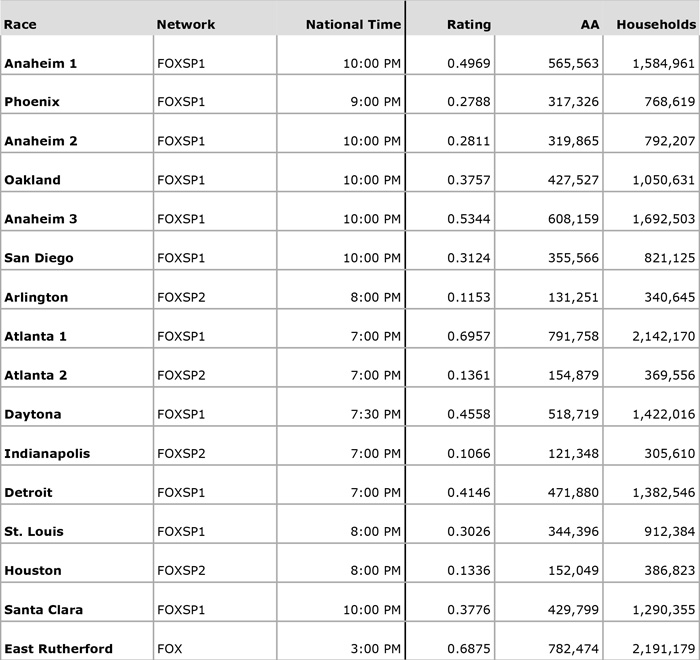 The 2015 Supercross series is in the books and the sport has been growing and growing for a number of years now. Although I have no proof, there did seem to be a drop in the paid attendance numbers this year to me that’s mostly due to the lack of a championship chase and the really nice TV package that the folks at Feld Enetertainment have put together.

Supercross is no different than the stick and ball sports where the ticket prices, the hassle of going to an event and the other costs outside of the tickets make staying in and watching the three hour live show on a high-definition 65″ plasma or LED TV more palatable. It’s something that every sport is going to have to balance going forward in the future. TV ratings for our sport aren’t put out there very much by the powers that be except to announce when they think it’s good and even then, getting the number isn’t easy.

Thanks to a Pulp reader out there that’s in the TV biz, he got me the ratings for all the SX races this year except for Vegas. Some interesting takeaways from looking at this list.

-First some definitions: Rtg column is the rating.  This is the % of people that can watch TV that watched. AA is the average number of people watching at any point in the program. HH’s is the number of unique houesholds that watched any part of the program

-The highest rated TV show was Atlanta 1 which was definitely a surprise because there wasn’t any real reason for it that I could see. Anaheim one was big and that’s understandable because it’s the season opener and New York is second which again isn’t a surprise because it was on the real FOX network and not their Fox Sports platform like ATL 1 was. Not sure what the lead in was there or maybe, partly because of storms in the area, the attendance was down and those people that normally pack the dome watched it on TV.

-Feld REALLY needs to make sure as many races as possible are on Fox Sports 1 as opposed to Fox Sports 2 because as you can see, the races on 2 didn’t do nearly as well as the ones on the top sports network that Fox has. Or better yet, ALL the races on FOX network would be best!

– Our TV insider also sent this note on the patterns he picked up on by looking at this chart: “For the Santa Clara race, on average 430,000 people were watching at any given time, starting around 650k and dropping over the course of the night to around 300k.

For the NJ race, on average 768,000 people were watching at any given time (78% increase), starting around 650k and increasing as the night went on to peak around 1.1 million.

Obviously it’s hard to compare Fox vs Fox Sports 1/2, but I think there is a trend that is still interesting, in that when the race is on later, people eventually turn it off (DVR playback is also much higher for the later races).

Anyhow, just wanted to share, as I find it interesting and I could see them doing more daytime races to increase exposure.”

– With almost half the races starting at 10PM EST (where the majority of the population lives) it’s a tough sell to get them to sit down and watch the race. And then when you wake up the next day, check social media and hear all about the race, well maybe the show never gets watched and the interest goes down. As our inside says, maybe we’ll see more day races although the great rating can’t be all traced to day time race as it was on the main network.