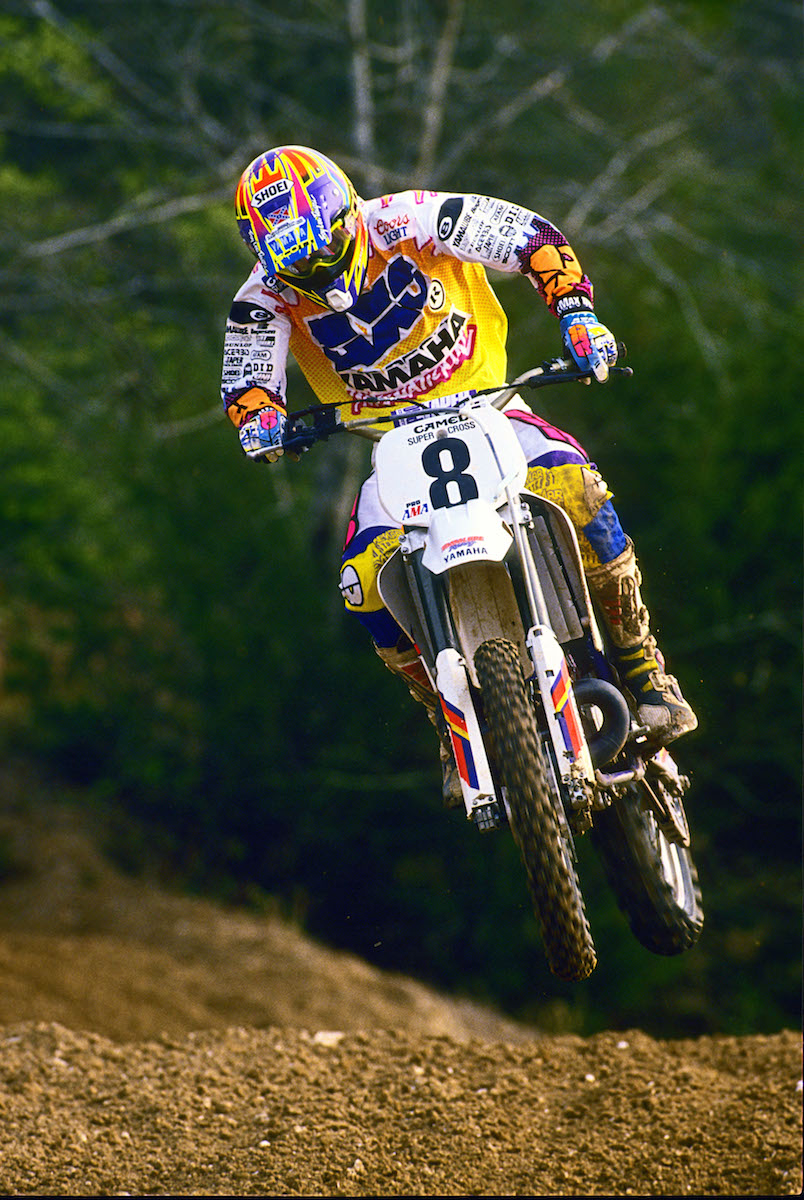 A hero walks away

A hero walks away

For MX Captured #45, I thought we would look back at a couple of classic Buckley shots from Damon Bradshaw’s infamous retirement season of 1993. This particular shot is from the National kickoff at Gatorback and in it, you can see that famous Bradshaw style that made him a favorite of fans around the world. His AXO gear is on point and that Troy Lee Designs Shoei is still the sweetest custom lid ever for my money. At the time, Bradshaw was the absolute embodiment of motocross cool and by far the most stylish man on the track, but the winds of change were blowing.

At Gatorback, Damon took his Factory Yamaha to a 10-2 score for 5th overall. This was not spectacular, but far from alarming.  At the time, the Jeremy McGrath train was just starting to catch steam and most people in the sport were still thinking The Beast From The East was the man to beat. He was coming off his second Supercross victory of the season at Atlanta and looked to be right on track with his comeback from ACL surgery the summer before. From the outside, Damon looked like a shoo-in to dominate for years to come.

In 1992, Bradshaw had set a record with nine Supercross victories and narrowly lost on the title to Jeff Stanton in one of the craziest Supercross finales of all time. His meltdown at the LA Coliseum was legendary and is still the subject of much conjecture and controversy. Did he choke, was it the effects of an ACL injury he suffered the week before in a spectacular Red Bud crash (my personal favorite), or did he actually throw it on purpose to negotiate a better contract (crazy talk to me, but a favorite theory of the tin-foil hat motocross set)? No matter what the true reason for the epic debacle, no one could argue that it changed the trajectory of Damon’s career forever. After LA, he would take the rest of the summer off to have his knee fixed and be introduced to the joys of sitting on the couch and watching General Hospital.

The summer away from the sport changed Damon and extinguished some of the fire that had lived in his belly since he was a mere toddler. Like so many mini prodigies before and since, Bradshaw had been under a tremendous amount of pressure from a very young age and the break had introduced him to a side of life he had not previously been allowed to enjoy. When he made his return to racing in January, Damon looked outwardly to be the same guy, but inside things were different.

At the Supercross season opener in January, Damon carded a very respectable 3rd behind Mike LaRocco and Mike Kiedrowski. A week later in Houston, The Beast was back and Bradshaw roosted to a resounding victory, his first in six months. At round three, he would card a frustrating fifth, while 250 rookie Jeremy McGrath would power his Factory Honda to his first 250 win. Wins at Seattle, Tampa and San Diego would follow for McGrath and the always-prickly Bradshaw would become less and less congenial in post race interviews. At some rounds it was truly uncomfortable to watch, as the one time heir apparent had his crown usurped by the new rookie sensation.

As the season wore on, Bradshaw became more and more frustrated with the pressure of people’s expectations and his results suffered. His 250 National season would close out with a string of double digit finishes, the worst being a 17th at Hangtown. As the Nationals switched to the 500’s, Damon would step down to the 125 class in support of his team mate Jeff Emig (Yamaha no longer made a 500). Once again, he would underperform and his best finish would end up being a 6th at the first round. His last race would be at Steel City, where he would card a disappointing 13th. Shortly after this, Yamaha would drop the press release heard around the world – Damon was retiring.

At the ripe old age of 21, the biggest star in the sport was walking away from a multi-million dollar contract and promising future. In the press release Yamaha put out at the time, Damon stated “I’ll be back when I feel I can earn my paycheck and not one second before”. Team manager Keith McCarty followed up with “I know this is (the) toughest decision of Damon’s life. I have always had a lot of admiration for Damon, but I really respect the way he faced his feelings and did what he thought was best. We will miss his dynamic personality around the pits and his presence on the race track.”

Thus ended the first chapter in the career of one of the most mercurial talents in the sport’s history. Bradshaw would sit out the entire 1994 season, before making a comeback mid-way through the 1995 campaign. Though he showed occasional flashes of the old speed (most notably with a second at Orlando in 1996 and a win at High point in 1997), he would never again be “The Guy.” Bradshaw would spend ’95 and ’96 at Factory Yamaha (a relationship that would sour badly toward the end), before finishing out his career with the AXO Sport backed Manchester Honda team in 1997.

While some would point to his 1992 Supercross title flameout and proclaim Damon’s career a failure, I would beg to differ. He may lack the titles of some of his contemporaries, but no one could argue his lasting impact on the sport. He was a trendsetter on and off the track and ushered in a new, more aggressive style of riding that is still apparent in the technique of riders today. The Chinese philosopher Lao Tzu stated “The flame that burns twice as bright burns half as long” and that was certainly true with Damon. The pressure and scrutiny success brought upon him sapped the joy out of racing, but while his heart was in it, he was one of the best.