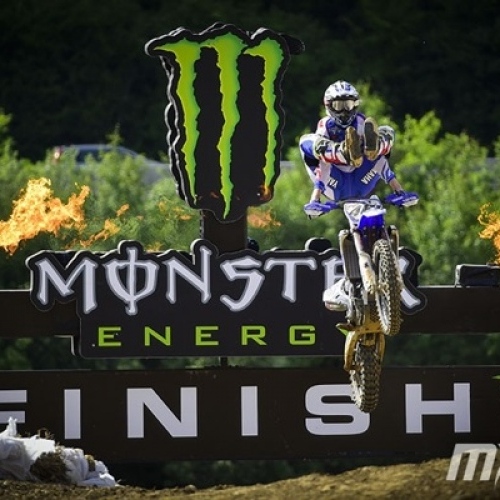 Romain Febvre will never forget the 2015 French GP. The 23 year old Frenchman, in his first year on a 450, won his first MXGP round in front of a brilliantly vociferous home crowd, and did it in style.

It was a brilliant performance from Febvre who stalked race one winner Cairoli all moto and took a solid second. But Febvre wasn’t going to accept second in race two and put the move on race leader Nagl with 20 minutes gone and that was that! Nagl had no answer to Febvre’s speed on the slick, hilly, blue-groove French circuit and the factory Yamaha man cruised to the overall win and celebrated with a heel clicker!

The former supermoto rider, Febvre, was one of the few to enjoy the track and his supemoto skills certainly came into effect on the slick surface but this win has been coming regardless. He stalled in Spain while leading and won the second moto in the UK, but this time in France he put both motos together and got to enjoy the French crowd singing the national anthem as he stood joyously on top of the podium.

Febvre is 50 points off the lead in the championship but with Desalle’s injury he might just be the fancied outsider if Nagl or Cairoli trip themselves up!

Evgeny Bobreyshev got his first podium of the year in yet another strong performance for the big Russian but Bobby understandably dedicated his podium to the three HRC hospitality members who suffered carbon monoxide poisoning in the Honda truck a couple of days before the event. All the three are still in hospital and not out of the woods yet.

For Bobreshev’s teammate it was the most frustrating day of a very frustrating season. Paulin was fast yet again on Saturday and on Sunday finally got a good start, and was hounding Cairoli for the lead when, unbelievably, his bike quit and the Frenchman was forced to push it off the track. In race two Paulin got a bad start and suffered vision problems on his way to a subdued sixth place.

It was a case of what could have been for Paulin yet again, and the Frenchman must be questioning just what he has to do to get results that match his speed in 2015. HRC have to figure out how to get Paulin of the gate and figure it out quickly.

The only man more disappointed than Paulin was Clement Desalle. The poor Belgian was doing everything right this season and was only four points off the lead going into the weekend. But, on a slow lap during qualifying, Desalle caught a rock under the front wheel on the take-off of a jump that caused the Belgian to crash and dislocate his shoulder. He bravely tried to ride the qualifier but crashed again and injured his shoulder more. On Sunday Desalle could only manage one lap before the pain and lack of strength in his shoulder forced him to pull out.

Desalle went from being four points off the lead to 41 in one devastating weekend. The only positive for Desalle was that after scans, he does not need shoulder surgery and should be able to finish the season. But will his shoulder be strong enough to race in two weeks time in Italy? There are still ten rounds left but riding with a weak shoulder won’t be easy for Desalle.

Tony Cairoli won the first moto and looked like he would take a lot of points off championship leader Nagl who could only manage sixth after a bad start. But in race two it was roles reversed with Cairoli with the bad start and Nagl in the lead! Cairoli came through to seventh while Nagl finished second. It meant Cairoli got third overall ahead of Nagl (fourth overall) and gained two points on the German.

The biggest surprise was the form of Dean Ferris, the Aussie hasn’t shown the speed many expected so far this season. But in France he rode brilliantly and scored two fourth places for fifth overall. Also impressive was MXGP rookie Glenn Coldenhoff who scored sixth overall and was fifth in race two, his best result of the season.

In MX2 it was another blistering battle between Jeffrey Herlings and Valentin Guillod in race one. After tipping over out of the lead, Herlings handed the lead to Jordi Tixier, which meant the French crowd went mental!

Behind Tixier, Herlings remounted in second only to have Guillod pass him and set the pace the Dutchman needed to match. Tixier held on to the lead for another ten minutes but even Tixier with the French crowd behind him, just couldn’t stay with the pace of Guillod and Herlings in the last five minutes of the race.

In the end Herlings just about held off the Swiss rider but both put on a brilliant show for the big French crowd.

Everyone wanted more of the same in race two but Guillod got a bad start and crashed with Damon Graulus in mid-air. The Swiss man went down hard but eventually remounted and climbed through to 13th to secure fifth overall.

Herlings meanwhile took the holeshot again and looked set to clear off into the distance, only no-one told Tim Gajser! The teenager on the HRC Honda was a distant fourth in race one but found some pace for race two and sat on Herlings back wheel until the last two laps of the race when he backed off to secure second. The pair beat Tixier by 26 seconds, showing again how hard they were pushing.

Pauls Jonass is having a very good season on the factory KTM and was solid again in France where he took fourth overall. In fifth it was Petar Petrov, the Bulgarian who switched from Hitachi/Revo KTM to the factory CLS Kawasaki team to replace Dylan Ferrandis. Petrov had his best result of the season in only his second race on the Kawasaki and if he can get out of the gate (which has been his problem his whole career) then more top fives and even a podium will be possible.

The riders get a week off now (although many are racing their national championship races) before heading to the historic Maggoria track in Italy for round nine and the halfway point of the championship.

Cairoli will want to win their in front of his home crowd, but Febvre, Nagl and Paulin will want to stop him! The biggest question will be just how fit Desalle will be and can he keep his title hopes marginally alive.