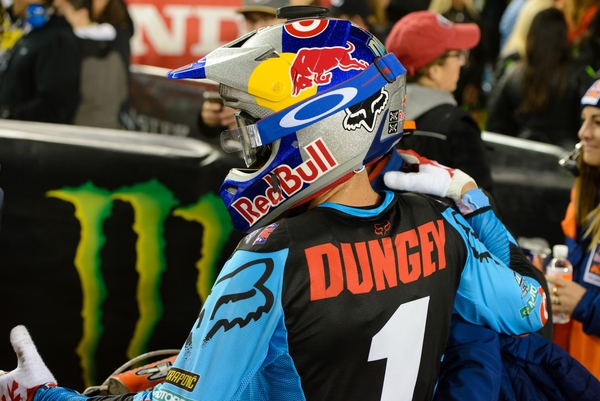 1- Kenny Roczen put heat on Dungey again, passed him briefly before getting repassed and then falling..what did you see in their battle?

David Vuillemin: It’s always great to have the 2 best riders start together. Ryan seems to get the best of Ken at the beginning of the race. He’s always just in front of the German. The battle was great early in the race. The rutted track as well as the sand section made it even more interesting. They both made small mistakes here and there and they were pretty even. For me, the key of the race was when Ken actually passed Dunj’ for a brief moment but didn’t make it stick. The pass was good which he hasn’t been able to do that much this season. Someone has to explain to me why Roczen decided to try to block Ryan at the landing of the triple when he already the pass made. There was no reason to do that. He had the inside line and was in great position to make the small inside line before the whoops section. By landing on the inside and going towards the outside to block Ryan and make him slow down, Ken actually gave Dungey the opportunity to pass him back by squaring him off. Which he didi beautifully. That was a great move by Dungey and I thought it was a very poor and dumb one by Ken.

When you make a pass and when you’re on the inside, you don’t need to do what Ken did. Especially when your opponent can’t pass you back in the next turn if you stay on the main line. Ryan couldn’t have passed him back if Roczen would’ve went for that inside rut. At this level and against the best rider of the moment, you can’t give him such a nice early christmas present… Soon after, Ken crashed and the race was over at that point. Dungey seemed out of reach even before Ken’s crash. A couple seconds lead for Dungey is like a 20 second lead for any other guys.

2— Anderson found himself again under the gun for some aggressive passing on Brayton…what did you think?

I might be biased when it comes to Anderson because I really enjoy watching him race and show no emotions when he rides. He doesn’t care of the consequences, he wants to move forward. This attitude would help a lot of guys these days. It’s Supercross, you gotta get in there if you want to pass. Especially on a tight track and when someone slower is in front of you while the best 2 guys are in front checking out. It seems like the nice guys always get the short end of the stick, Brayton as well as Seely, are part of that nice guys club. At one point, the nice guys need to figure out they have to stop being nice and start being fearless racers instead of being only good technical riders. Sometimes you have to trade paint to get the job done.

3- The Peick/JS7 collision that resulted in James not coming out for the semi was something that people were debating…what’s your take on the collision?

It’s tough to blame any of those guys on that collision. In theory, I would say that the guy behind should be in control of the situation and not jump. It’s like if a couple guys don’t jump a triple, you shouldn’t triple in the middle of the track. There are chances you might land on someone’s helmet. In this particular case, James doesn’t triple out and only double all the way on the left but cut inside sharply while Weston committed himself to triple out. It was very unfortunate for Stew but you can’t really blame Peick for the collision even if it could’ve been easily avoided. I would also understand if you are on Bubba’s side as well as Weston’s though. Both are defendable. Stewart is having such a difficult season though. It’s either he’s crashed all by himself and put himself out of the race or someone else does it for him, Dungey in A1 and Peick this weekend or he has bike problems. I never believed in luck or coincidences but it’s starting to be a lot of unfortunate events for James. I really hope we’ll see him at 100% one day even if I wouldn’t mind him call it a career…

4— Mookie crashed three times, has a one point lead now. What did you think about that 250SX class and J Mart looked great with a start.

Mookie had a tough night that’s for sure. He still managed to get 8th with 3 crashes which isn’t bad at all and let him keep the red plate. I think he got a little impatient when he was outside the top 10 early in the race. His last 2 crashes, in the sand and after the finish line jump could’ve been easily avoided. I still don’t know what he was thinking when he crashed in the sand. It seems like he thought the turn was a 90 degree instead of a 180 since he hit the tuff blocks at the exit of the turn. Back to square one for him and Plessinger and it’s giving JMart a little hope again. Jeremy was the best 250 rider in the main Saturday . Plessinger wasn’t as comfortable as he was in Indy. It’s weird because the track conditions were very similar. I am not sure what happened there. As far as Martin goes, he got a great start, checked out early by clocking the best lap of the race on lap 3. Despite the best lap time in the main, the great start and the win, I didn’t think he looked tremendously better than the past weekends.

In my eyes, he can do much better riding wise. He’s still making too many mistakes and missing too many sections to impress me. Also, if you compare his times to the 450, which is a good base because they were all doing the same obstacles, JMart would’ve been 11th fastest in the 450 main with his 250 Main best lap. He did his best time on lap 3 while Roczen clocked the best time of the 450 main on lap 5 and Dungey did his on lap 7. That is a 17 lap difference (with 22 riders on the track) between JMart and Roczen best times in their respective mains and 19 with Ryan’s. I doubt the track was better/faster for the 450. Jeremy should be closer in time than that. After seeing him ride and analyzing lap times, I can’t state that he looked great. He looked better but he still has some work to do in SX. That ride Saturday with a 450 won’t get him in the top 10.

5— Which riders make you shake your head and which riders have surpassed your expectations?

I didn’t think Audette would’ve improved that much by changing team/bike. A top 3 and a top 5 are some great performances for a replacement. I have to put Dungey in the mix. Even with what everyone says about the class being the best ever since a couple years, he’s super solid, starts are on point. He’s not affected by the pressure of the youth and the speed of Roczen. I don’t think I would’ve bet that Ryan would’ve won more that 50% of the races after Round 14. He’s 8 for 14. That’s pretty amazing.

On the other hand, I would’ve bet that Tomac would’ve gotten more that one top 3 and more than one win by round 14. Same thing for Barcia not making a Top 10 yet by round 14. He’s only raced 5 races though but still, who would’ve thought… We could also talk about the struggles of Baggett in SX, Bowers not making it on the box after 6 rounds, Davalos not being on the podium since Daytona. If Mookie didn’t stall his bike stupidly in the second to last turn in Daytona, Martin D. would’ve had only 1 win at the opener and no podium in the following 5 races. I guess I shake more my head than I get impressed or maybe I’m just a bitter old man!