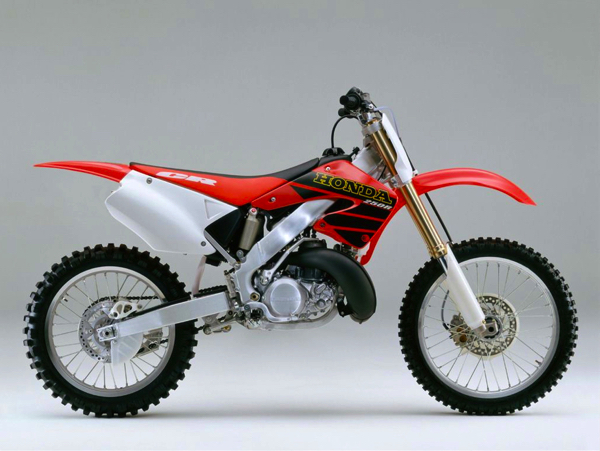 For this week’s GP’s Classic Steel we are going to take a look back at the machine that featured Honda’s last great 250 two-stroke motor, the 2001 CR250R.

For this week’s GP’s Classic Steel we are going to take a look back at the machine that featured Honda’s last great 250 two-stroke motor, the 2001 CR250R.

The Honda CR250R remains one of the most storied machines in all of motocross. For more than three decades, the red rooster remained one of the most influential machines in the 250 class. The first truly competitive Japanese 250 in ‘73, the first to move to liquid cooling in ‘81, the first to offer cartridge forks in ’86, the first to offer Supercross-bred “low-boy” body work in ’88 and the first to jump to an aluminum frame in ’97. Along the way, they certainly  had their share of misses, but also several epically great machines. Even today, the mid-eighties and early nineties CR250R’s are revered as some of the greatest motocross bikes ever produced. They were wicked fast, sharp handling and bred to win races.

Toward the end of the 1990’s, that Honda mystique began to tarnish, as a combination of technical gambles and greatly-improved competition began to chip away at Honda’s dominant position. A stitch to an aluminum chassis in 1997 wowed consumers initially, before the ZANG-POW factor gave way to sore wrists and a nasty front-end push. The new alloy chassis ruined Honda’s legendary handling, compounded their mediocre suspension and led many (including Jeremy McGrath) to lament the demise of their tried-and-true steel underpinnings.

In addition to their chassis woes, a series of motor missteps allowed the competition to catch and pass their once dominant power position. Starting in the mid-eighties, Honda had enjoyed a class-leading position in the 250 motor rankings. Nothing was as fast, flexible and fire breathing as Honda’s 250cc powerhouse. Then in 1997, a switch to a more top-end focused powerband opened the door for Kawasaki to snatch away the title of best deuce-and-a-half motor in the land. Brawny, burly and abrupt were the KX’s calling cards in the late nineties. These Kawasaki powerhouses got up and went at the twist of a wrist and left the other 250’s in their wake.

While Kawasaki was busy convincing the masses to go green, Honda continued to try and sort out their Buck Rogers racer. Poor suspension remained a Honda bugaboo and the CR offered the least forgiving ride on the track. The overbuilt chassis offered very little feedback (aside from mind-numbing vibration) and the new motor continued to lack the ease-of-use of its earlier siblings. A switch to an unpopular mid-range only power curve for ’99 only exasperated matters and left long time Honda owners wondering if Big Red had lost their way.

For 2000, Honda took what they had learned from their rocky first foray into alloy frame building and channeled it into a much-improved design. All new from the ground up, the 2000 CR was lighter, leaner and better than the ’99 model in nearly every measurable way.  The new chassis retained the aluminum construction of the ’97-’99 machines, but paired down the spar thickness, narrowed the midsection and dropped the dual down tubes in an effort to dial some flex back in to the ultra-ridged frame. New bodywork and a less butt-bruising seat improved ergos and helped bring some comfort back into the equation. Excess vibration continued to be an issue and the bike was still too stiff for some rider’s liking, but the overall handling was much improved.

For 2001, Honda chose to mostly stand pat in the chassis department and focus on bringing their award winning motor back up to snuff. New porting, a revised ignition curve and a redesigned exhaust looked to widen its midrange-focused powerband. In a big change for 2001, Honda ditched its decades old relationship with Keihin in favor of a new 38mm TMX carb from Mikuni. This switch would leave Honda with the only mixer of 2001 without a Power Jet or throttle position sensor. Finishing off the motor package was an all-new reed cage and slightly larger (20%) air intakes in the side panels to improve flow.

On the chassis side of things, the only big change for 2001 was the availability of a 20-inch wheel option for the first time.  This was a popular mod on Factory team at the time and it was intended to improve front-end feel and take a little bite out of the overly stiff alloy chassis. In addition to the wheel option, BNG moved the “CR” from the shroud to the seat and a half-waffle grip made its appearance for the first time. Other than these few mods, the 2001 CR250R chassis remained basically unchanged from the year before.

While the new bike looked largely unchanged, its performance was a major improvement. For the first time since the glory days of the early nineties, the CR was once again the conversation for best deuce-and-a-half motor of the year. Gone were the top-end focused mills of ’97-’98 and the mid-only power plants of ’99-’00. In their place was a broad and burly style of power that was a throwback to the glory days of Stanton and McGrath. Low-end power was decent but not in the same league as the torquey Kawasaki. Where the motor really came alive was in the midrange, where it hit hard and pulled with ferocity into a tire sheading top-end hook. The power was flexible and the bike required far fewer shift per lap than in 2000. With its mediocre low-end and explosive midrange, the CR could be a handful on slippery tracks, but if there was traction, it could run with anyone.

While the overall power was much improved, there were still some problems. By far the biggest of these was the new TMX carb, which proved nearly impossible to jet correctly. It was rich down low (helping to exasperate the lackluster low-end response) and lean on top. Sorting this out proved a tight wire act, as leaning out the low-end seemed to mute the midrange hit and fatting up the main led to a burble in the mid-to top transition. By keeping a stable of jets and needles at the ready, you could make it work, but it was never quite right and proved far more finicky to live with than the other 2001 offerings.

As to the handling, the CR250R remained more or less the same bike it had been in 2000. The second-generation alloy chassis was less overbuilt than the ’97-’99 offering, and did away with much of the numb feel and front-end push that plagued the gen one design. The slightly more compact dimensions and revised geometry were a huge improvement and brought back most of ’94 -’96 CR’s turning prowess. The Honda offered better turning than the yellow, green and orange offerings, but slightly less precision than the excellent YZ. On fast straights, there was still a little headshake, but it was less twitchy than pre-2000 CR’s. While the 20-inch front wheel was big news, testers were split on its actual benefits. In certain conditions (notably hard-pack), it seemed to offer sizeable improvements, while in others, its virtues were more ambiguous. Overall, it gave the front end a slightly plusher feel that was most noticeable on hard and choppy tracks.

In the suspension department, refinement was once again the name of the game. Upfront, the Showa forks remained largely unchanged, aside from stiffer springs (0.44 vs. 0.43) and a slightly lighter compression damping. Out back, a new linkage promised a more progressive action and a slightly larger shock piston was added to fight fade and improve oil flow in the Showa damper.

On the track, the Showa twin-chamber forks performed well in most conditions. The new stiffer springs and lighter damping curve alleviated some of the mid-stroke harshness riders complained about in 2000 (and every year since 1988), but on slap landings, the spike could still be felt. Some riders also complained of a “dead” feeling in the suspension that had been apparent since the switch to the aluminum frame. With the switch to the 20” wheel, the plushness improved, but it was still not in the same league as the excellent Yamaha’s KYB’s.

Out back, the changes were only partially successful. The stiffer spring was a step in the right direction, but most riders felt it needed in increase in rate. It tended to drop down in the stroke on G-out and hard landings and imparted a harsh feel overall. Stutter bumps in particular seemed to flummox its valve stacks and the CR liked to kick in the rough under braking. With an increase in spring rate, the action improved, but once again it was never going to be as plush as the excellent Yamaha.

Overall detailing continued to be excellent and the CR proved to be the best built of the 2001 offerings. Plastic quality, seat comfort and overall feel were excellent and the CR’s graphics were some of the most durable in the class. Both the clutch and brakes were trouble free and rated the best in the test. The new half-waffle grips were praised by most testers and proved comfortable enough to not demand an immediate aftermarket replacement.

On the not awesome list were the CR’s annoying vibration (a problem since the switch to alloy to the frame in 1997), notchy shifting (uncharacteristic for Honda) and harsh overall feel.  The addition of rubber mounted bar clamps helped slightly with the vibes, but the Honda continued to be the tingliest of the 250’s by a wide margin. The large alloy frame spars also made simple tasks like getting to the carb and adjusting the shock preload a major pain compared to the steel framed competition.

In 2001, Honda took a solid overall package and finally brought back the one thing it was sorely missing, competitive power. The 2001 CR250R would see the last usage of the venerable 249cc power plant that had powered Hondas to countless victories and titles throughout the nineties.  The all-new 2002 CR250R would see this mill retired in favor of a high tech new new case-reed motor that by most counts, was not nearly as good as the one it replaced. While this third (and last) generation two-stroke alloy chassis would prove the most refined of all the perimeter-framed CR’s, the glory days of Honda’s two-strokes were quickly fading into the rear view mirror. The arrival of the all-new CRF450R thumper for 2002 would herald a shift in focus away from oil-burners once and for all.  Within few years, the whole of Team Honda would be on four-strokes and by 2008, the bike that started Honda’s motocross story would be little more than a memory. It was a sad end for a historic machine, but at least in 2001, it got to have one more day in the sun.