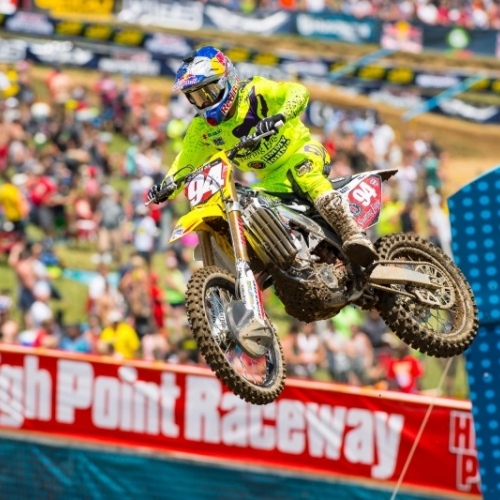 With three 450 class stars down and out it’s now or never for the guys to step up.

With three 450 class stars down and out it’s now or never for the guys to step up.

Oh, come on! Are we serious right now? Just when you think the 450 class can’t take another hit it does. The old saying is that bad things always come in threes. In the case of the 450 class this Lucas Oil Pro Motocross Championship this old saying has come true.

First we were hit with the news that Red Bull KTM’s Ryan Dungey would be sitting out due to a broken C-6. Then all of a sudden Trey Canard is out with a back injury. If those blows weren’t enough we are now hit with the news that Jason Anderson is out for up to eight weeks. Anderson has broken his collarbone as well, but his didn’t happen at the race like Dungey’s, rather a practice crash. Of course this doesn’t really matter because they are hurt regardless of where they crashed.

With Anderson out that takes some more wind out of a deflating 450 class series. If you’re keeping score that means that three out of the top ten riders in the standings are now sitting out. Of course racing will always be exciting, but Ken Roczen is running away with the championship very early. After High Point Roczen has a 41-point lead over Eli Tomac and it’s even farther back to Cole Seely in fourth.

Anderson, who currently sits fifth in the standings, is coming off of his best 450 outdoor finish at High Point. His 3-3 moto scores were good enough to for second overall on the afternoon. It gave me hope that he might be able to continue to step up his game to eventually to run with Roczen. Needless to say my hopes are dashed.

Who else can step up and run the pace of Roczen? I’m not necessarily even talking about beating Roczen because that’s a long shot at this point. The only rider that will be able to do that will be Eli Tomac, but that guy has got to get a good start and sprint right away. At this point it’s looking like K-Roc might just go 23 for 24 moto wins, but he may have been able to go undefeated if he didn’t have that mechanical problem at Glen Helen. If I’m out of bounds on this theory then please feel free to email me.

I honestly thought that Tomac would have really stepped it up at his hometown race at Thunder Valley a couple of rounds ago. That wasn’t the case and now the gap to Roczen is large. Tomac has a lot of time to make up and he needs to put on a riding clinic in order to get himself back in the title hunt. He needs to make something happen this week at Muddy Creek.

We also have wild cards like Marvin Musquin and Justin Barcia. Musquin has just come off of his first 450 outdoor podium at High Point and finished a strong second in the first moto. Musquin is always fast, but he’s spotty when it comes to standout podium speed. He was strong over the weekend and I think he will have the same type of performances on the other East Coast tracks this summer. Outdoors is a different beast than supercross, but I think Musquin favors the ruts and breaking bumps that the east tracks produce. Can he beat Roczen though? It’s going to take a mistake from the point’s leader and I don’t know how many of those we’ll see. It’s nothing against Musquin or any of these riders. K-Roc is simply on a different level right now and I don’t see him straight up losing.

Barcia’s season is coming around right now and it’s about time he showed up! It’s been weird watching him outside of the top ten because it’s never happened through his entire career up to this point. Bam Bam won races last summer and was one of the only guys to step up and beat Dungey last summer. Could he turn his year around so much that he starts beating Roczen? If anyone can do a complete changeup and win it will be Barcia. Let’s see if he can build off of his 7-5 finishes from High Point this weekend at Muddy Creek. Barcia will feel more comfortable on these east tracks and will be very strong at places like RedBud, Millville, Unadilla, and Southwick.

{Another side note I want to add in here is about the RCH Suzuki team. They’ve come a long way from the Hart and Huntington Honda days and it’s cool to see them have success. The teams that stick around long enough become powerhouses and that’s exactly what RCH has become with Roczen as their rider. It’s cool to look back and see just how far some of these teams have come (i.e. BTO Sports KTM). }

As far as the 450 class is concerned we’ve lost a few of our stars. It’s a big bummer, however who is to say that other riders won’t step up in their place? It’s the circle of life in any sport. Athletes will continue to push to the front and it’s actually always entertaining to see someone put in their best work. Let’s just hope someone finds the speed and consistency to give Roczen a good run in at least some of the motos.

Thank you for checking out my column this week. If you’d like to email me you can reach me at troy@pulpmx.com and we can talk some more dirt bikes!