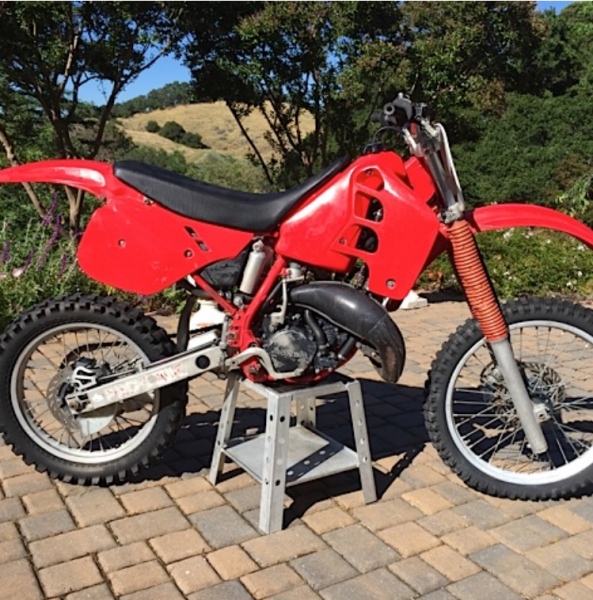 It took a while, it was a lot of money but we’re done!

Everyone has a different reason why they picked their project bike and I think in the end you have to respect that choice right? The ’90 Kawasaki was also on the bucket list for me because they were so damm cool when they came out. The ’88 YZ, well that wasn’t on my list but a guy in Alaska offered it to me for free if I paid the shipping (thanks Ollie!) so I went for it.

Now I did step by step for the other bikes and figured that was old news so let me just present the completed machine here with one “before” shot for you to look at.

Ok, so I’ve done three of these now and we have a cool idea for this bike down the road but for now, I think I’m done with project bike builds. Like, I’ve had enough you know?

It’s funny, as the bikes have gone along they’ve gotten progressively harder and more expensive. Despite being far and away the choice for vintage racing, Honda’s got the worst availability for NOS parts out of the three I did. This Honda was stored near the ocean so it was pretty rough with rust and broken/crappy bolts. The power valve was worn so badly and no parts were available for it that it took three eBay purchases to make one system. Well, three purchases AND Spencer at the JGR shop to fix one arm up and take the slack out of it after the purchased ones were too hammered to use. The transmission? Yeah, it was shot and that was another purchase. Clutch? Inner, outer, pressure plate- all blown out. The other two bikes didn’t need any of the above outside of an exhaust flap for the KIPS on the Kawasaki.

The frame? Cracked and a broken exhaust pipe bolt meant a trip to a welder and I figured I’d get the paint blasted off the swingarm at the same time via soda blast. I got the frame back with hack welds and a jacked up exhaust tab along with a swingarm that was pitted like crazy because they “ran out of baking soda”.

So that was more running around along with getting the brake calipers and ATAC chambers beat down black paint blown off.

The bike had an ’88 rear wheel on it which meant a new disc on the back as well and that was a whole other ordeal that I’d rather not talk about.

To be fair, some of the issues, costs I had were my own doing. After all, I didn’t HAVE TO decide to put on WP USD’s from a 2001 KTM on it did I? I didn’t HAVE TO spend the crazy amount of money on the “Honda Racing” covers from England or the handful of Ti bolts did I?

Ok, enough whining by me. I will say that I think this is the coolest looking project bike I’ve done so far and the trickest as far as what’s inside the bike. Let’s take a look at the final project yeah?