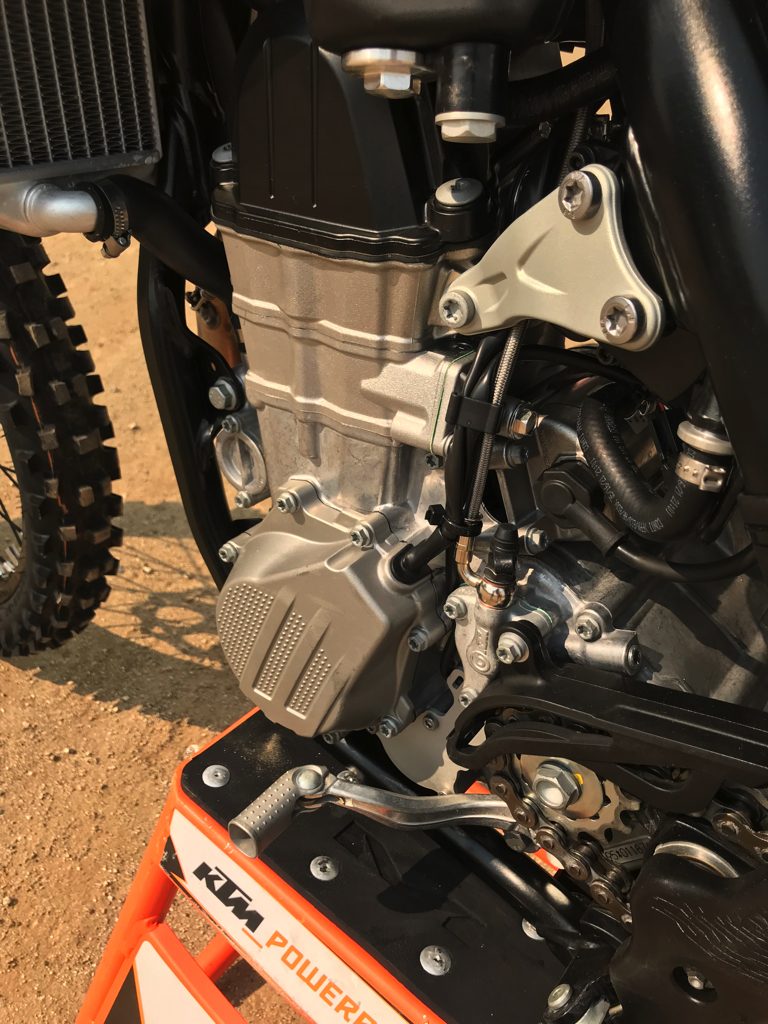 Engine: The new 2019 KTM 450 SX-F engine isn’t any different than the 2018.5 machine besides mapping. I do feel with the updated mapping you’re getting a little more mid-range pulling power and a slightly added RPM response (at mid-range rpm) increase over the 2018.5 model. The 2019 is still silky smooth and has a very linear power, which doesn’t wear the rider out easily like some other 2019 450cc models can. The map switch is a great tool for riders that want a more smoother roll on delivery (map 1) or want a more frisky and peppy bottom end hit (map 2). I prefer map 1 in 2019 as it’s still linear enough on hard pack portions of the track, but has a cleaner hit down low to get me out of soft pockets of the track better than map 2. 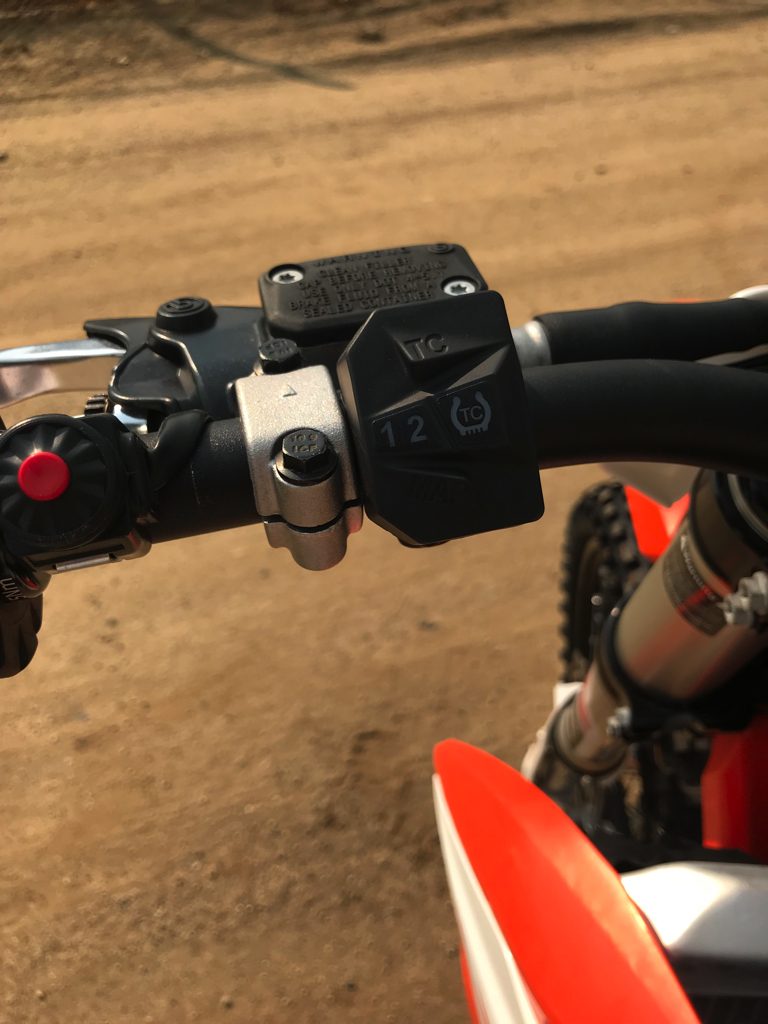 FI Setting: I do feel KTM missed the mark when it comes to the ignition/fuel mapping. The 2019 KTM 450 SX-F feels a little rich/dirty down low and a little lean on top end (de-cel popping). If KTM can get their mapping figured out, the already great engine character would be even better. I am going to go test some other maps and see if it helps with a cleaner power delivery. I know going to a Vortex ignition, that is mapped by Jamie Ellis of Twisted Development is a thing of beauty on this machine. Just FYI…. 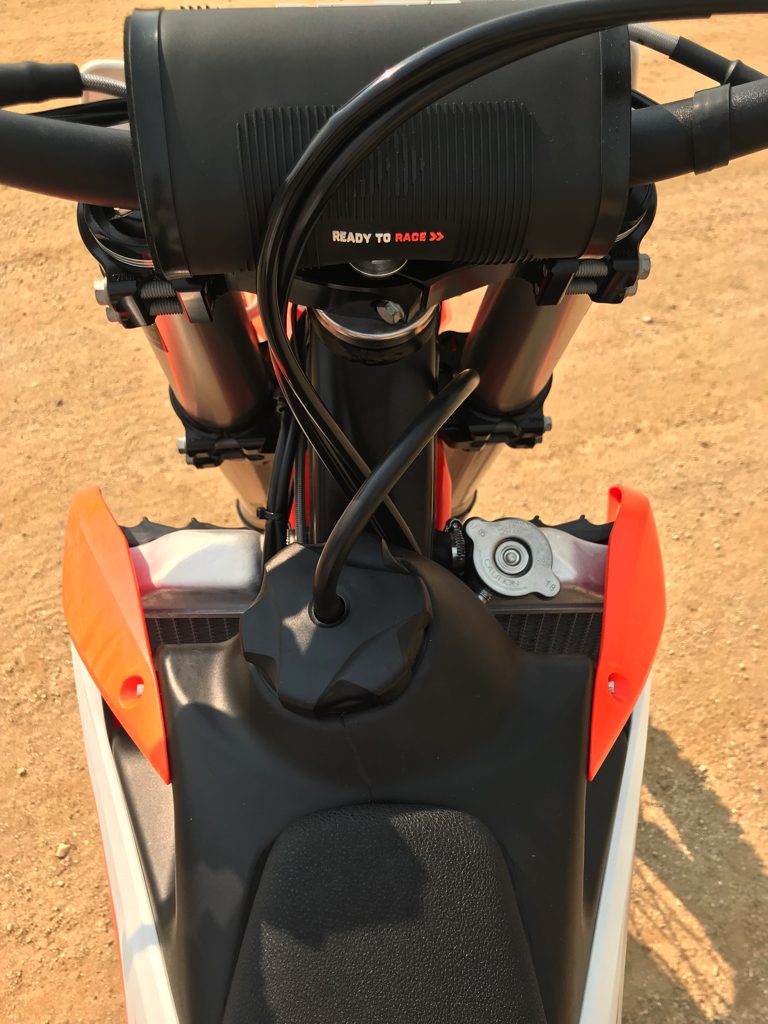 Chassis: This is where most of the changes (from the 2018) are felt on the track. The 2018 450 SX-F flexes a little too much at times off throttle (de-cel bumps) especially when the track is tilled deep or very loamy. I noticed this more when I went back east to go race than I did on the west coast. The 2019 KTM 450 SX-F is stiffer, but not harsher on choppy de-cel. This is important! Stiffer doesn’t always mean harsher! This creates a more precise feel coming into corners and also a better planted front end (yes, even with the AER fork). Did I mention it was light feeling? The 2019 KTM 450 SX-F feels like its five pounds lighter than the 2018. It’s only one pound lighter, but it feels much more lighter on direction changes. I am able to feel this on tip in leading into corners or on longer ruts. For example, a Yamaha YZ450F feels planted coming into corners, but also takes some effort to be able to lean it over (and keep it there) on longer ruts. The KTM just needs your body positioning to think about leaning over and it does it ASAP. It’s like the orange brigade is reading your mind coming into or through corners! Straight line stability is as good as the 2018 standard model, but everything is better on the 2019 model once off-throttle, which I prefer. 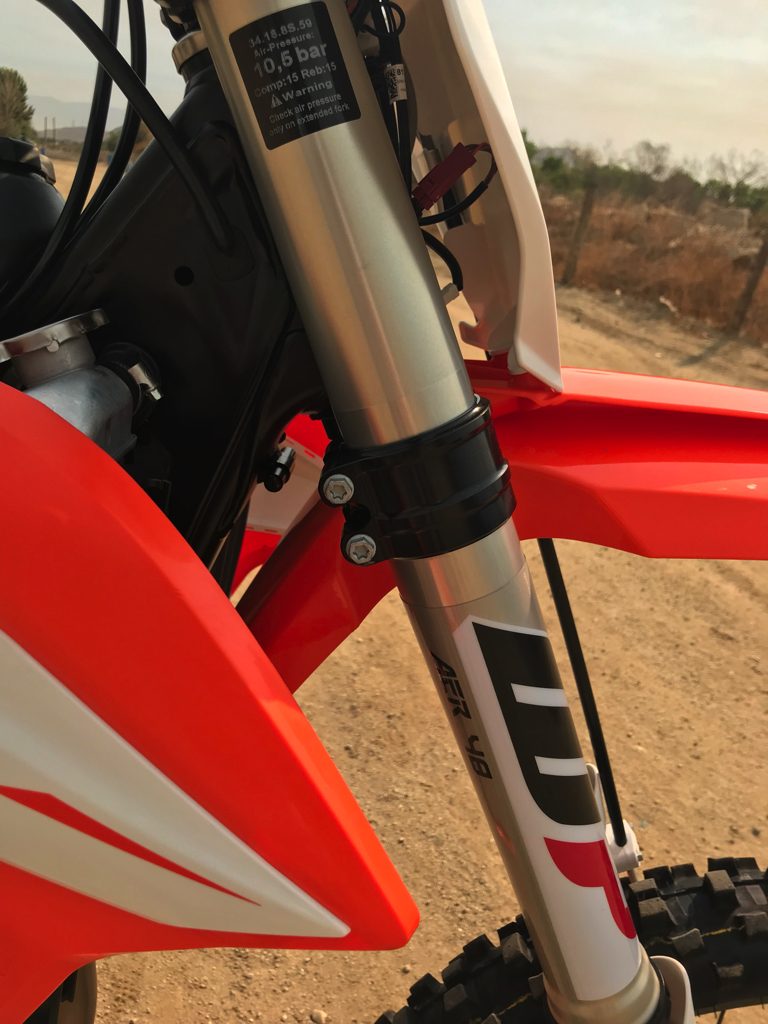 Suspension: I told this to Dave O’Connor at KTM. “If this bike came with a spring fork, every shootout would be yours”! You all know I am not an air fork kind of guy, but the WP AER stuff is pretty damn good (for an air fork). Does it have the front end bite of a spring fork? No, it doesn’t. Does the AER fork have mid-stroke comfort? Yes, it does. Now don’t get me wrong, the Yamaha KYB SSS fork is still better, but the AER fork isn’t atrocious like the Showa SFF-TAC Air fork was. Where the AER fork suffers is the consistency over a long day of riding. When I am riding the track at 3PM and have been there all day, the AER fork doesn’t react the same as it did at 1:30PM. It’s not as drastic as it used to be, but I still want a little more consistency in my front end. I am however getting used to how much front end feel I have with the AER and trust it more than I ever have. It gives me decent front end grip on lean in, but I would like a little more grip on flat corners where this is nothing to bank off of. Like I said, mid-stroke comfort is good on straight-line and the KTM 450 SX-F reacts well on braking bumps. The WP AER fork does have a little harsh spot on the top of its stroke when accelerating, but that is only when I went to a stiffer air setting (10.7 bars versus 10.5 bars). I would like to see a little less deflection than the KTM front end has (on acceleration). The shock is quite good on the 2019 KTM 450 SX-F and as usual has a dead feel to it. This is a great feeling on the track! Tons of rear wheel traction and less side to side movement is felt on the 2019, which gives me a feeling that I can twist the throttle harder and sooner out of corners. 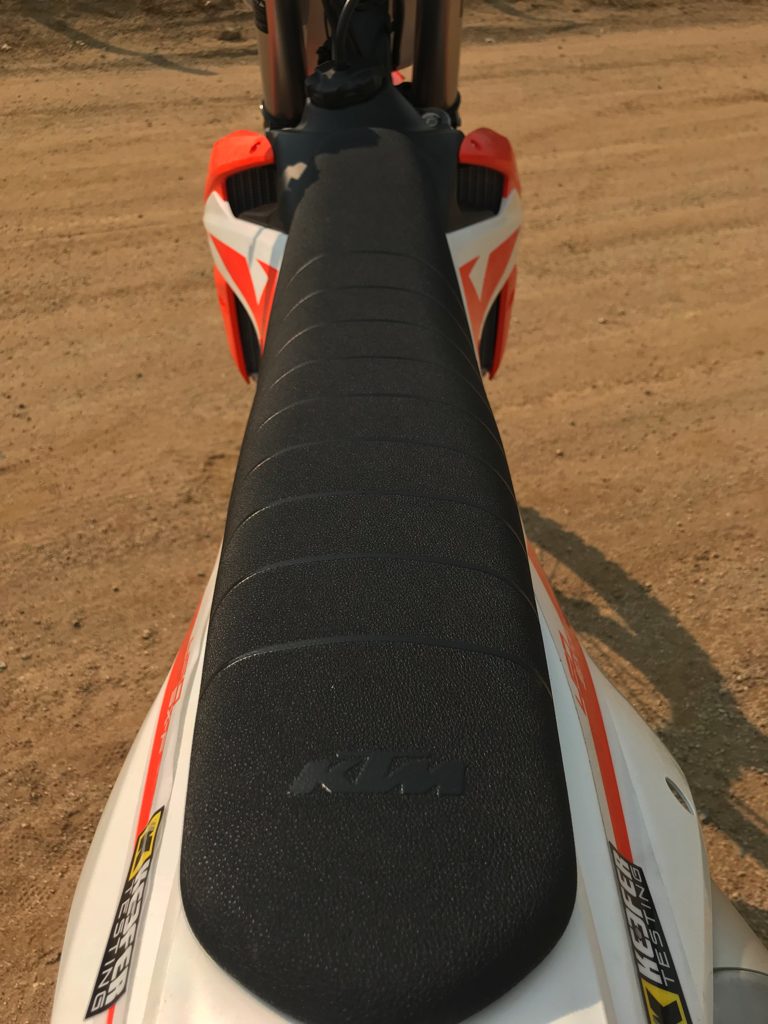 Ergonomics: The 2018 KTM 450 SX-F had a bend in the shrouds that annoyed my legs when I cornered. People complain about the Yamaha YZ450F being fat in the middle, but the 2018 KTM 450 SX-F was as fat in the shroud area (with that bend in it). The 2019 KTM doesn’t have that fat feeling or that bend any more in the shrouds! Hallelujah! The 2019 bike is very narrow feeling in the mid section and you are now able to ride up on the tank even better with the lower mounted radiators. The rider triangle (peg/seat/handlebars) is both short and tall rider friendly, but KTM needs to cut their bar width to a 803mm spec. The longer spec of the Neken bar gives me a wide feeling when I am cornering and makes me feel uneasy. I cut last year’s handlebars down to 803mm and it gave me an even better feeling coming into corners without my arms resting out too wide. You would think 7-10mm isn’t that big of a deal, but once you cut them and see, you will thank me for your new found confidence in corners. I am not a huge fan of the looks of the new seat cover, but it is much friendlier to the butt on longer rides. 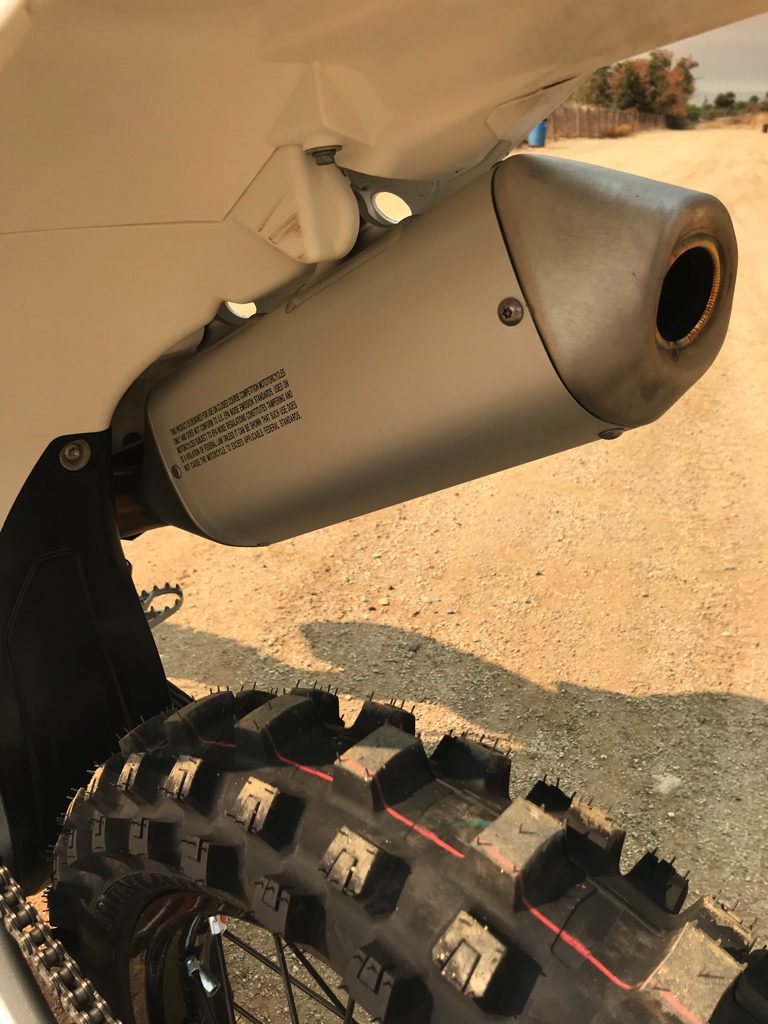 Things To Check/Carry On A Consistent Basis: I have put many hours on the 2018.5 Factory Edissssssh and know a few things that you want to check/carry more often than not. Check your spokes after break in, check your sprocket bolts every other moto or so (and blue or red Loctite them), carry a couple fuel filters in your toolbox and make sure to have an array of torx bits in that toolbox. You’re welcome! 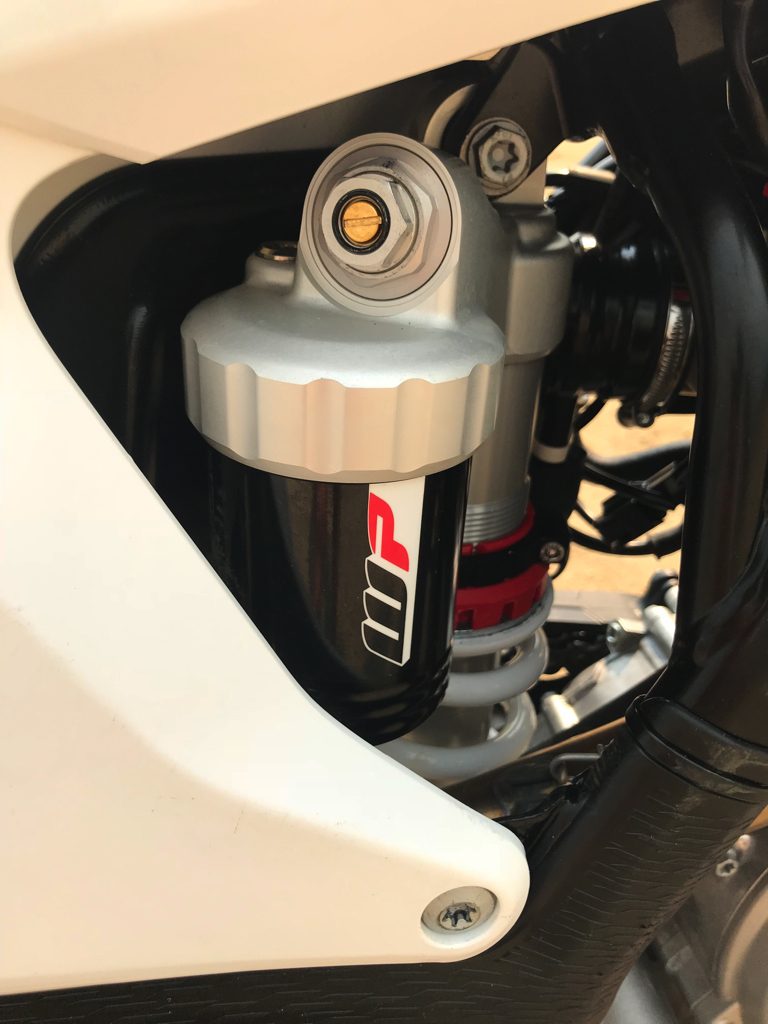 Black Throttle Cam: The stock “gray” throttle cam to me uses a long pull (twist to full throttle). I almost have to double chicken wing it to get there at times. In order to combat that and get some more bottom end feeling, install the black throttle cam that KTM offers you. Doing this will make the KTM 450 SX-F feel more exciting out of corners and hit slightly harder/sooner. I stayed on map 1 when using the black throttle cam.

Pankl Transmission: Under load the new 2019 transmission is much easier to shift. Not to say that the transmission on the 2018 is bad, but the buttery smooth shifting is somewhat reminiscent of some factory transmissions that I have spent some time on, in the past. Another thing that I noticed that the 2019 does better than the 2018 is that I am able to find neutral much easier (when at a stop), before I put the machine on the stand. However, while riding I have yet to hit a false neutral! Knock on wood! 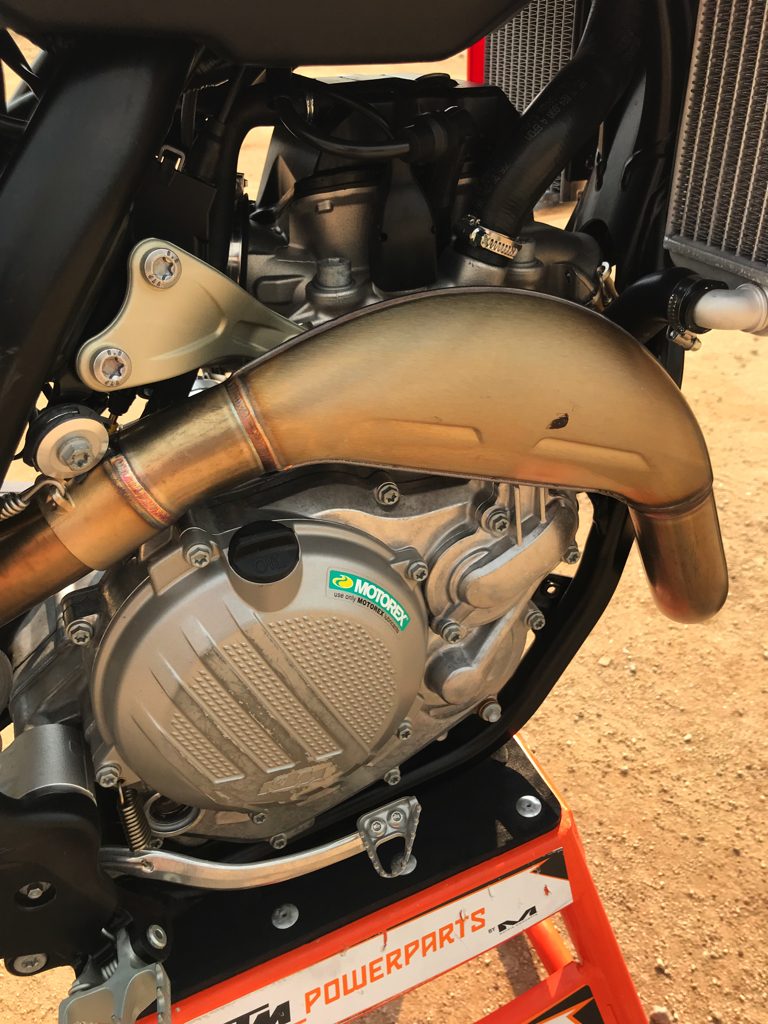 Adapting To A KTM: If you’re thinking about making the 2019 KTM 450 SX-F your next bike, but are nervous about that European feel, don’t stress on it. The newer KTM’s feel less foreign then they did just a few short years ago. I am able to adapt to the orange machines after coming off of Japanese machines easier than ever.

High Speed Compression: Heavier riders (180 and up) might want to try and go with a 1/4 turn in (stiffer) on high speed compression. If you’re less than 180 pounds you can stick with stock to 1/8 turn in.