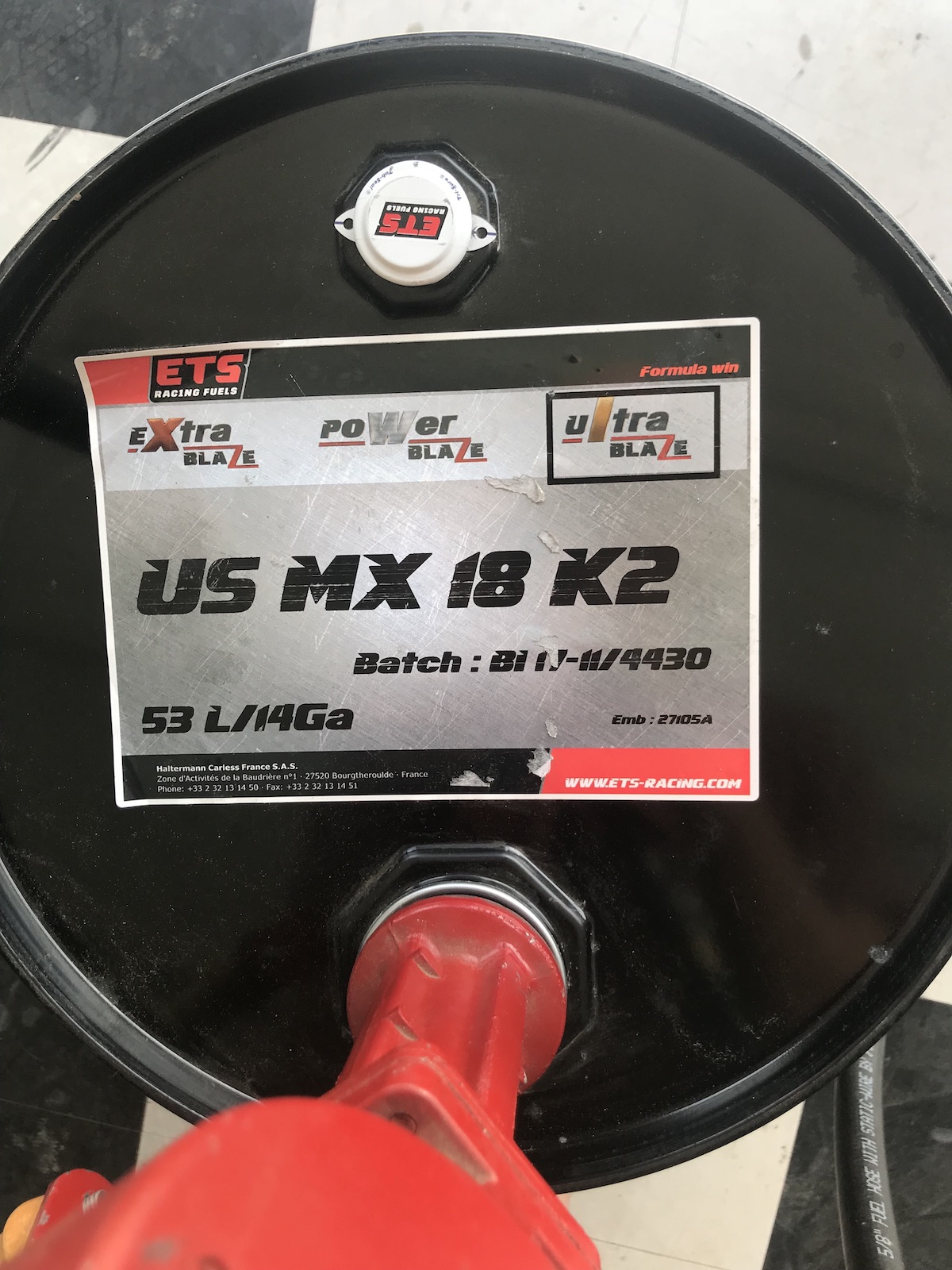 Not everyone has the money to go purchase race fuel for their dirt bike. High end race fuel is something that maybe only a few die hard weekend warrior racers really want. I understand this. That shouldn’t deter other media testing outlets away from testing such fuels, but it seems like you can’t find that much real world testing info about such things. This test may not be for everyone, but I feel like I wanted to really see how much of an improvement (on the track) race fuel can make in a machine when properly mapped for modern four-strokes. With most high end fuel, simply dumping it into your bike and riding is not going to benefit you in any way. So don’t waste your time and money unless you plan on mapping your existing ECU for any type of high end fuel. There are some other direct pump replacement fuels that DO NOT need re-mapping, but for this test I wanted to try and get the most out of what I am pouring in. I mean it’s $26.00 a gallon, so we have to be “ALL IN” when going this route right? More on that price later… ETS Racing fuels are based out of France and have been around for 10 years, but maybe you’re not too familiar with the company, so here is a breakdown of the ETS US MX 18 K2 racing fuel.

About The Machine: I chose the 2019 KTM 450 SX-F to test the ETS Racing Fuel because it is one of the bikes that I feel that can benefit from quality race fuel. The KTM 450 SX-F has a smoother power delivery with a stock ECU setting that is slightly off from the factory. I also have been doing some modifications along they way with this model and have seen very solid improvements. Each modification that I have done to the orange brigade has made this machine better with each bit of money that I have thrown at it. That is what you expect when you put money into your bike right? Well, that is not always the case because sometimes putting your money into your bike doesn’t mean it gets better. Putting the money into the right modifications is key and that is what we have done to this 2019 KTM 450 SX-F. Our 450SX-F has a Twisted Development Vortex ignition that is mapped for ETS US MX K2, VP MR Pro 6, and regular super unleaded pump fuel. The beauty of the Vortex ignition is that you have 10 preset maps that you can go back and forth from. The simple fact that the ignition is super consistent and hasn’t gave me any problems is just one reason why I went this route. The engine is completely stock (minus the FMF 4.1 Muffler System) and I wanted to keep it this way for durability reasons. I ride the crap out of the KTM 450 SX-F and I DO NOT need to be rebuilding it every 20 hours. 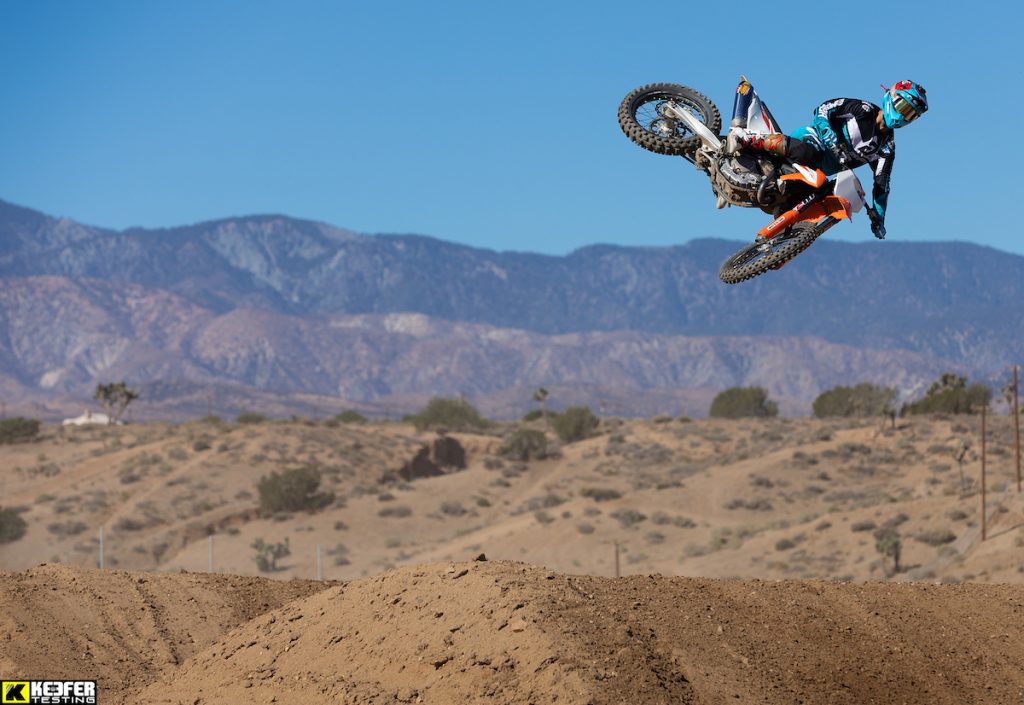 What Sparked My Interest To Test The ETS Racing Fuel: Number 1….Not a lot of people know about ETS Racing Fuel and who is using it. Factory Red Bull KTM and Rockstar Husqvarna race teams use and endorse the fuel. In fact, ETS doesn’t “give” those teams fuel, because in reality both teams “purchase” the fuel. This sparked my interest because it’s not everyday that teams are “spending” money on pieces to their factory bike puzzle. Most of the time factory teams test parts and said companies provide them with that product for free (or even pay them to run their product)! Number 2…We have a ton of ethanol based super unleaded pump fuels around California and this has caused a couple fuel pump failures for me in the past. Number 3…Once Jamie at Twisted Development put on the Vortex ignition he told me there was a map preset for VP MR Pro 6 and ETS US MX 18 K2 racing fuel, so I went ahead and got some of each coming my way. Number 4…I tested with the VP MR Pro 6 for a while and noticed a nice gain in pulling power (compared to pump fuel), but it boiled on warm summer days in California. I really liked the power gains I felt, but after 18 minutes of hard riding the KTM began to run dirty and inconsistent. This really sparked my interest to see if another competing fuel could give me the same power gains, but more consistency over the course of longer motos.

So How Did the ETS US MX 18 K2 Perform On The Track: First thing’s first. If you’re a die hard moto guy you will really love the smell of the ETS US MX 18 K2 racing fuel. It’s a sweet smell and if you have walked around the pits of an AMA Supercross, I am sure you have picked up the scent. However, other people may not appreciate the smell (like the wife), so you may want to store the fuel somewhere far away from the living room or kitchen area of your home (just in case your garage is close to these parts). Once the KTM fuel tank was emptied and the ETS was poured in, I headed out on the track to do a 30 minute moto. I made sure to test all three fuels (VP, ETS, Pump) on the same day (over the course of a few days) in 90 degree temps for an apples to apples comparison. The first thing that I noticed with the ETS US MX 18 K2 racing fuel is that the KTM 450 SX-F had better throttle response (than that of the VP). Throttle response was slightly more crisp and instant with a better bottom end pulling power out of corners. You can just feel a little more “meat” when rolling on the throttle. Mid range was also improved slightly, especially when I was rolling sweeping corners in third gear. The KTM just seemed to pull better and have increased mid range RPM response. The VP and ETS fuels feel very similar up on top end as I didn’t notice any real difference there. To me the biggest selling point (besides increased power feeling) was the consistency the fuel had over the course of a 30 minute moto. With the VP I had a clean running engine feel up until 18 minutes and then it started to boil (on very warm days), but with the ETS fuel the KTM ran crisp and clean throughout the entire moto. This was huge for me! There were no remnants of fuel puking out the vent house and I could do a full day of motos with zero boiling issues.

Cost And Where To Purchase: You may want to sit down for this. The cost of the ETS US MX 18 K2 racing fuel is $26.00 a gallon and comes in 15 gallon drums. Again, like I mentioned before, this is an expensive investment that is not for everyone, but if you’re serious about performance and getting that little extra, this is a great alternative fuel that is CONSISTENT! The VP MR Pro 6 fuel is slightly more expensive compared to the ETS US MX 18 K2 fuel so if you’re already purchasing high end fuel, this will not be a big shock to you. You DO NOT need an aftermarket ECU to run this fuel, but you will need to get your stock ECU re-mapped to reap all the benefits of this fuel. The ETS fuel usually makes your machine run a little richer than that of the VP MR Pro 6, so leaning out your bike a little is a good way to go. There are plenty of engine builders who are familiar with mapping ECU’s to this fuel so please feel free to email me and I can gt you some recommendations. If you are looking to get a drum of this fuel ASAP you can reach out to Bill Bovensiep (US Sales Director) at bbovensiep@h-c-s-group.com and he can get you sorted for delivery.

Any questions about this test please feel free to email them to kris@keeferinctesting.com