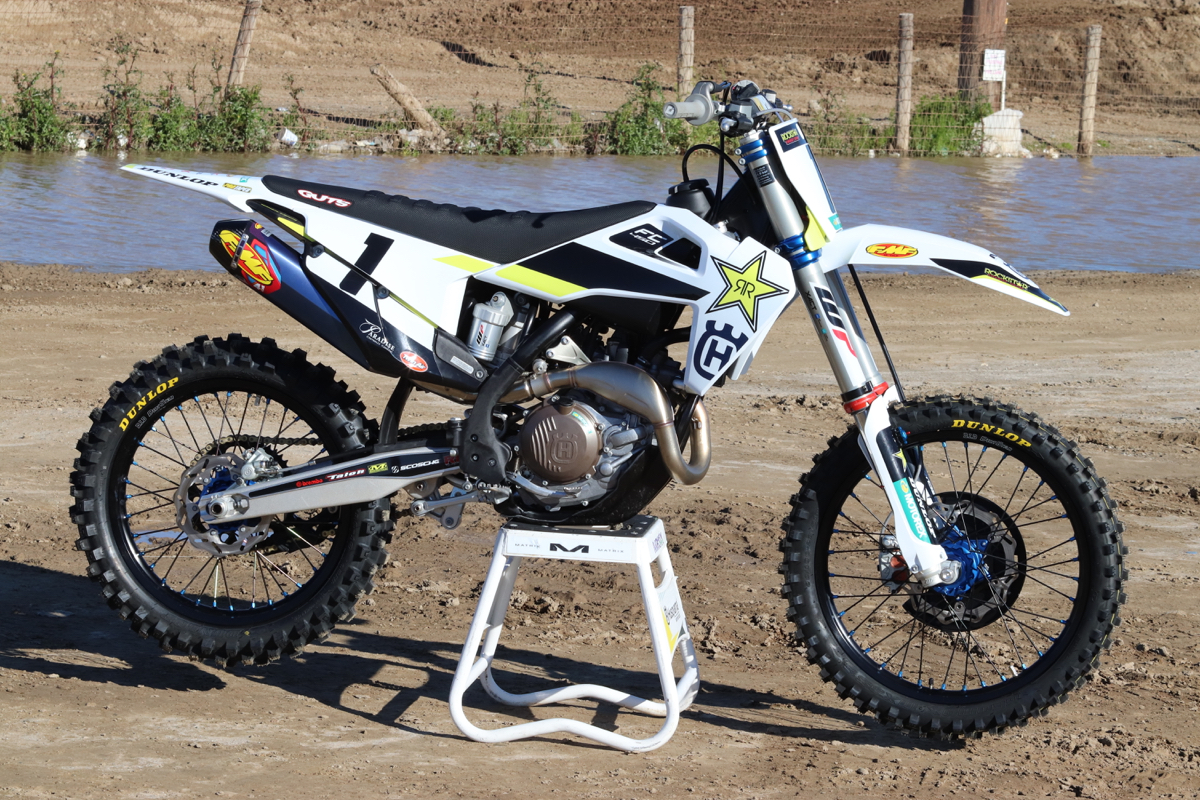 The latest Husqvarna has hit our grubby little test hands and we are here to let you in on what we thought of it. The 2019.5 Husqvarna FC450 Rockstar Edition has some small changes from the previous version, but we wanted to see if those changes made a difference on the track. Not to be outdone by the orange side, Husqvarna has a few different bits and pieces to their bikes to separate themselves from the brigade. Below are ten things that you all should know about the latest “Edissssssssshhhh” offering from Husqvarna.

What are the changes to the 2019.5 Husqvarna Rockstar Edition? 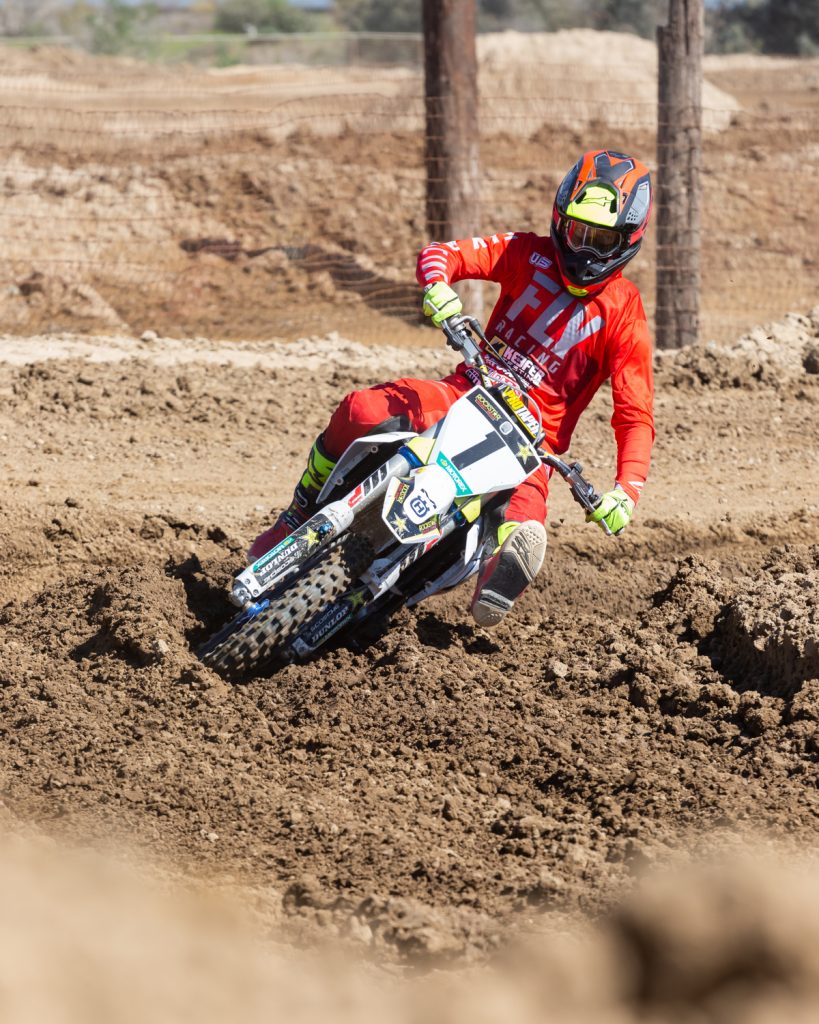 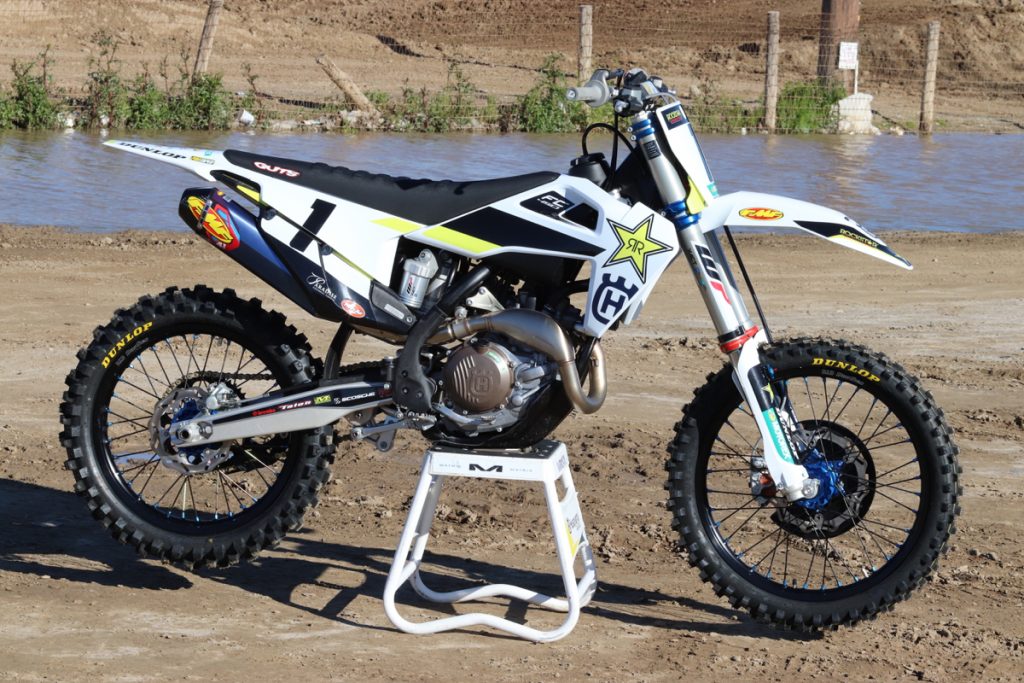 Engine: On paper there are only three pieces to the RE’s engine that have changed… The CP box in box piston, the Pankl connecting rod with brass bushing, and topology optimized rocker arms. Now with those three things in mind I wasn’t expecting much change from the 2019 KTM FE, but to me the free-feeling of the engine is slightly more noticeable in 2nd and 3rd gears than the orange bike. When revving the Rockstar Edition out in second gear there is much less engine de-cel drag than the 2019 version. The RE also feels like it pulls farther in second gear than the 19, but the overall bottom end delivery has slightly more RPM response due to the FMF slip on muffler. I tried the stock Husqvarna 2019 muffler at this test and it provided a smother roll on power delivery than the FMF, which made rolling corners easier, but the FMF system had more punch out of the corner.

ECU Settings: ECU settings are the most important piece to your modern day four stroke engine. An ECU setting that is spot on can help the bike’s chassis and an ECU that is not mapped correctly can hurt handling on the track as well. The Husqvarna’s ECU setting is not as good as the KTM FE in stock form, plain and simple. Yes, it’s the same ECU as the KTM, but feels different on the track! Why? I DON’T KNOW!!!!! I only know what I feel on the track and I am telling you it’s not the same low end delivery. It’s slightly rich off the bottom (0-10% throttle opening) and has a slightly disconnected feel to the rear wheel, which hurts the handling of this bike mid corner. It’s tough to roll the corner smoothly with that jerky on/off feel from the mapping (on very low RPM only). To help remedy some of this I experienced with back pressure on the muffler. With the stock mapping, the FMF slip on needs some back pressure, so installing the insert into the muffler can help that 0-10% throttle opening. Once I got some added back pressure, the Rockstar Edition smoothed out on low RPM and gave me some connection back to the rear wheel through/out of corners. Map 1 (linear pulling power with less throttle response down low, but more top end pull) and Map 2 (more pulling power/RPM response down low and slightly less pull up top) also has a distinct difference on the track and are more noticeable than the 2019 mapping choices. This is all good news for future RE buyers.

Chassis: If you’re a Husqvarna owner you know that it takes more time to break in the 2019 steel frame compared to a Japanese aluminum framed motorcycle. I have only a few hours on this chassis and it still has that firm feel to it much like the KTM FE did. It takes a good 7-8 hours on this frame to feel broken in or “relaxed” on the track. The RE turns as good as the 2019 version (once mapping has been remedied) and all the same excellent “change of direction” qualities are apparent on the RE as well. Straight line stability is not the best of the 450 bunch, but not the worst neither.

Suspension: WP has changed their branding strategy so don’t freak out about the XACT name just yet (we can explain that one in another article). I do like the silver color change that WP has done for the RE/FE line of suspension and that color change will also be on the 2020 production models. The WP AER fork has an updated piston that allows for a tighter tolerance along with valving updates. The standard air pressure fork setting has also now gone up from 10.5 bars to 10.9 bars on the RE. The rear shock likes a sag of around 105mm, but the overall feel of the RE’s WP suspension is slightly firmer with more hold up than the 2019 model. Would I rather have a spring fork? Of course, but the updated AER fork does have some qualities that I like. I like that the front end feels light (de-cel/off-throttle) while keeping front end traction high enough so I don’t have to change my riding style up. I am a front end steering rider and the AER fork will give you what you need on initial lean. The mid stroke of the RE’s WP fork has a free-er feel and the action seems smoother than 2019, which makes for a plusher ride. The shock doesn’t feel that much different to me than the 2019, but then again, I never had a problem with the 2019 shock.

Gearing: It comes with a 13/48, but with the FMF slip on muffler, it doesn’t need that extra tooth like the KTM does. The FMF has more bottom end pull than the Akrapovic so stock gearing is just fine.

Lightweight Feel: You would think with an engine character that is so smooth down low and linear feeling, that the Rockstar machine would feel heavy on the track, but it feels quite the opposite. It’s light, flickable, and if you want to make a sudden line change, it can do that exceptional as well. Leaning into corners and keeping it leaned all the way through the corner is the Husqvarna RE’s strong suit. I can also stand up through corners much easier on this machine (compared to other colored machines) due to the lightweight nature and slim feel.

Pro Taper Handlebars: Say what you want, but handlebars are a huge piece to a bike’s puzzle. Compared to the KTM/Neken combo, the Husqvarna/Pro Taper combo is much friendlier to the hands/wrists out on the track. There is less vibration and more dampening character through the EVO bars, which I prefer on rough tracks.

FMF Slip On: The FMF slip on has better RPM response and more excitement than the Akrapovic. The FMF is louder than the Akrapovic, but the FMF also needs that insert put in with the stock mapping. If you have an FMF system already on a current Husqvarna/KTM model than that insert (that’s probably still in your box or garage) will work inside this new system on the RE. 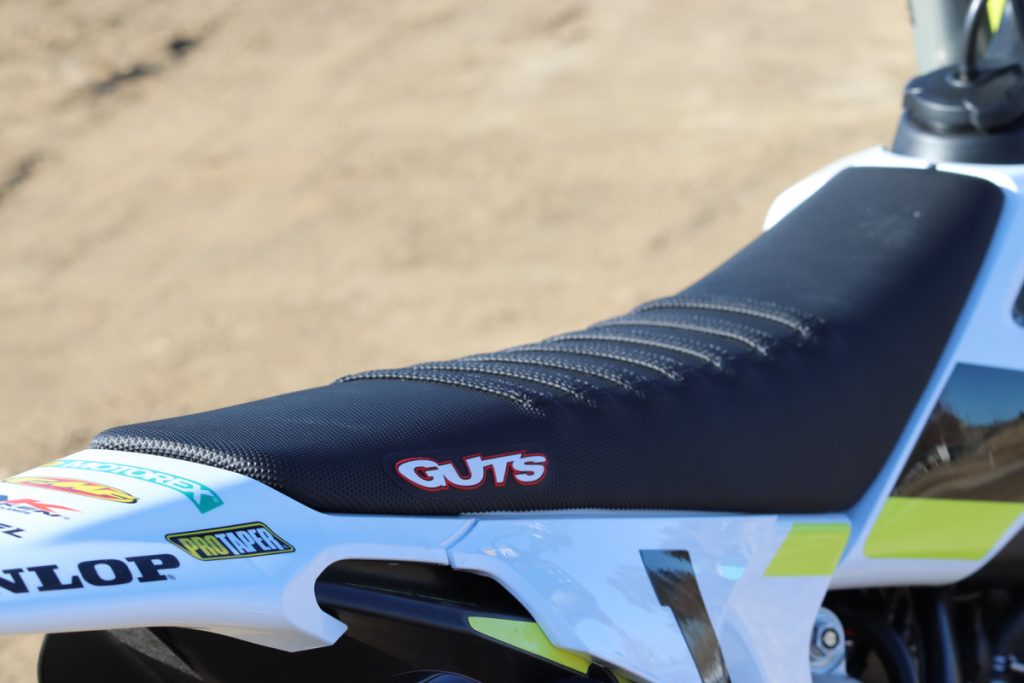 GUTS Racing Seat: Just like the KTM seat, this GUTS seat is very grippy, but also will eat your butt cheeks up on a long day of motos. The foam itself is not the problem, it’s just that the pleats on the seat are very aggressive. Just be ready to spackle the cheeks up with some Bag Balm if you’re riding sand or plan on doing a long day of riding.

Factory Trips Clamps: The Husqvarna aluminum factory CNC-machined triple clamps feature optimally tuned steering stem stiffness, in order to try and achieve perfect alignment and precise fork clamping for a highly responsive and smooth fork action. They can be adjusted to an offset of 20 or 22mm that gives you the option to change your Husqvarna RE for different track conditions. I noticed zero added rigidity riding with RE’s clamp (compared to the stock 2019 clamp). I also didn’t notice any improvements on the track (with the the RE clamp), but the blue does look eye popping!

So which new “Edition” machine should you get? The white one or the orange one? These bikes are like 1A and 1B and both have minute differences on the track. I prefer the Husqvarna’s components (with the FMF slip on, GUTS seat, and Pro Taper handlebars), but I also like the KTM’s low RPM feel a little more than the Rockstar bike. Find out what is more important to you and go that route. However, just know when it was time to spend my own money on a dirt bike, I did choose the Husqvarna Rockstar Edition.

If you want to learn more about this 2019 Husqvarna 450 Rockstar Edition, listen to the Rocky Mountain ATV/MC Keefer Tested Podcast on iTunes, Stitcher, or here on pulpmx.com, and or keeferinctesting.com right now. We try hard to give you a couple different avenues to digest your dirt bike information.