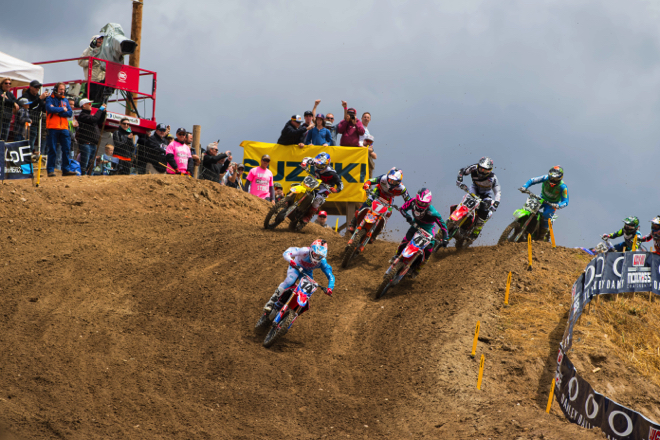 It’s time to take the big dogs off the short leash, twist some loud handle and hold it open!

First, the “easy” part, if you have some time on Saturday afternoon and can check your computer or mobile device during the 120 or so minutes between end of qualifying and first gate drop, you will be choosing riders that are going to be in the motos. No worries about picking a rider that doesn’t make the main!

Second somewhat easier thing, two gate drops! This means that you will get two chances to correctly choose your first lap leader.

Now, the hard part, if you have taken a peak at the handicaps for Hangtown you might have noticed some 18’s. Don’t translate that 18 as if you are looking at Supercross, this is an entirely different beast!

First off, we are talking about a 40-man gate, not a 22-man like Supercross. Second, points only pay for top 20, so your 18 handicap pick needs to finish at least 38th to score any points, at least 28th to score double points, and 18th or better to max out.

The first thing that needs to be noted going into Hangtown is the weather. The current forecast, as of my writing this on Friday, the day before the race it’s looking like it’s going to be a mudder, with a 92% chance of rain starting right at gate drop.

Keep in mind, if practice is dry, and the floodgates open for moto one, we will be looking at two entirely different tracks. I would advise staying away from riders who do not have good support, spare engines, mechanic, pressure washers, etc.

All stars for the 250 class include; Shane McElrath (5), Chase Sexton (3), Alex Martin, (4), Jordon Smith (6), RJ Hampshire (4), Justin Cooper (2), Dylan Ferrandis (2), and Adam Cianciarulo (2). Of these riders it’s hard not to like Chase Sexton at a 3 and Dylan Ferrandis at a 2. I know, they are both coming off of championships, etc. but I’m not buying into the “hangover hype”. Both are hard working riders who only gained strength as the ’19 Supercross season progressed.

There are some notable non-all stars to mention as well. Michael Mosiman (2) showed great speed to finish the SX season, is on a rock solid team, and is well capable of finishing in the top ten outdoors. He finished 11th overall for the season last year, and only looks to improve.

Garrett Marchbanks (3) is another rider with a solid team who should put in some good rides outdoors. He finished 10th place at Hangtown last year, and started the season 10P – 8P – 9P. With a 3 handicap he could make a great pick.

Thomas Covington (1) is the biggest mystery of this bunch. He was clearly not ready to race Supercross this past season, but the outdoors is a different game. Will he regain confidence now that he’s in his happy place? During the 2018 MXGP season he had 13 top 5 finishes, including an overall win and nine podiums. At a one handicap, he could be the pick of the weekend. Bonus, many owners might stay away due to recency bias.

Finally, of the factory supported non-all stars, I also like Colt Nichols at a 3 handicap. He has shown brilliant speed, and is very capable of a top 5 finish, no matter the conditions.

This is a good place to discuss game theory as I predict a very high pick trend for Zach Osborne at a 5 handicap. He makes a great pick here, hence the predictably high pick trend. That being said, should something funky happen in the mud, and he winds up with a lower than expected score, team owners who make the contrarian play will have a huge edge on the rest of the field.

I feel like there are questions with quite a few of the all stars here, Baggett always struggles at Hangtown, will this continue? Jason Anderson is returning from injury and a long layoff from racing, how hungry is he and is he in shape? Justin Barcia is great in the mud, but broke both wrists only weeks ago, how can he be in shape? And finally, what’s going on with Ken Roczen’s health? He was not himself in the late rounds of Supercross, has the two-week break given him a chance to figure it out?

This means that we might see some non-all stars shine and I think there are a few that we need to take a look at.

First, Justin Bogle (3) who was a frequent mention in this column during Supercross, and was the PulpMX Fantasy Supercross scoring champion. He is riding for a job, and coming in hot on great equipment. He has shown great outdoors speed in the past, and is well capable of putting in a top three ride and scoring lots of points.

Cole Seely (1) hasn’t raced Pro Motocross since 2017. When we last saw him competing outdoors he was a consistent top 5 finisher in the 450 class, with his last four finishes going 4-5-3-4. He may also be riding for a contract and should make a very strong pick for Hangtown.

Henry Miller (10) was a consistent 12th – 17th place finisher during the 2018 Pro Motocross season. At a 10 handicap he could be up for a strong scoring day, however, he was involved in an automobile accident on his way to Hangtown in which his RV was very damaged. Take a look to check if he made it and is racing before locking him in.

Lorenzo Locurcio (10) is all over the map with his outdoor finishes. His last three in 2018 were 26th, 36th, 13th, so he presents a high risk-high reward pick. He had a high finish of 7P at Southwick last year and is very capable of a top 15 finish. He could be a make or break player for overall scoring this week.

I would be negligent not to mention PulpMX’s own Kris Keefer (18) here. The 42-year-old expert of all things moto – and after dark has been training hard for his two-race Bullfrog Spa – Smart Top Honda ride. He will bring veteran savvy, great technique and a sense of purpose to Hangtown. Keep an eye on qualifying, if he qualifies top-40 he might make a lot of team owners very happy!

As we mentioned in the intro, you will get two chances to correctly choose the first lap leader, this should provide a significant increase in correct picks, especially when we look at some scoring from Supercross.

Those of you who read this column during the Supercross season may remember that Pro Circuit Kawasaki dominated the 250 class. Adam Cianciarulo was first to the stripe 4 times for 60 points in the west, with his teammate Austin Forkner repeating the effort on the east coast with the same 4 for 60 points. The only 250 rider that was close to repeating that was Colt Nichols, who scored 3 for 45 points. While we won’t have Forkner to choose from at Hangtown, Nichols and Cianciarulo will still make great picks for first lap leader.

During the Supercross season correctly picking the 450 class first lap leader was statistically harder than the 250 class. This is really interesting when we look at the end of year stats though. Cooper Webb dominated it. He was first to the stripe seven times for 105 extra points. If you had guessed him every week you would have finished the season up 25 points. I don’t see a reason for this not to continue and am interested in locking him in on a weekly basis for first lap leader.

The 450 class was taken down by Justin Bogle with a huge 436 point score. Ben Lamay followed him with 429 points and Cooper Webb with 418. Cooper’s score was significant as he was only eligible for double points once, at the season opener. Here’s how the top-5 broke down.

The 250 class was taken down by team Ram It himself, Cameron Mcadoo with 288 points. This is a pretty huge score considering he rode seven less races than the 450 class. We also saw Michael Mosiman score 281, and Kyle Peters round out the podium with 252. Here’s the top five overall.

That’s it for now! There’s a lot of questions to be answered on Saturday, I for one am looking forward to seeing what happens as this outdoor season unfolds. We are likely to see some handicaps that are glaring mistakes in hindsight, make sure you dig deep and find them before gate drop.

Good luck to all this season and please remember to support the PulpMX Fantasy sponsors when you shop for all of your off road, motorcycle and MTB needs.