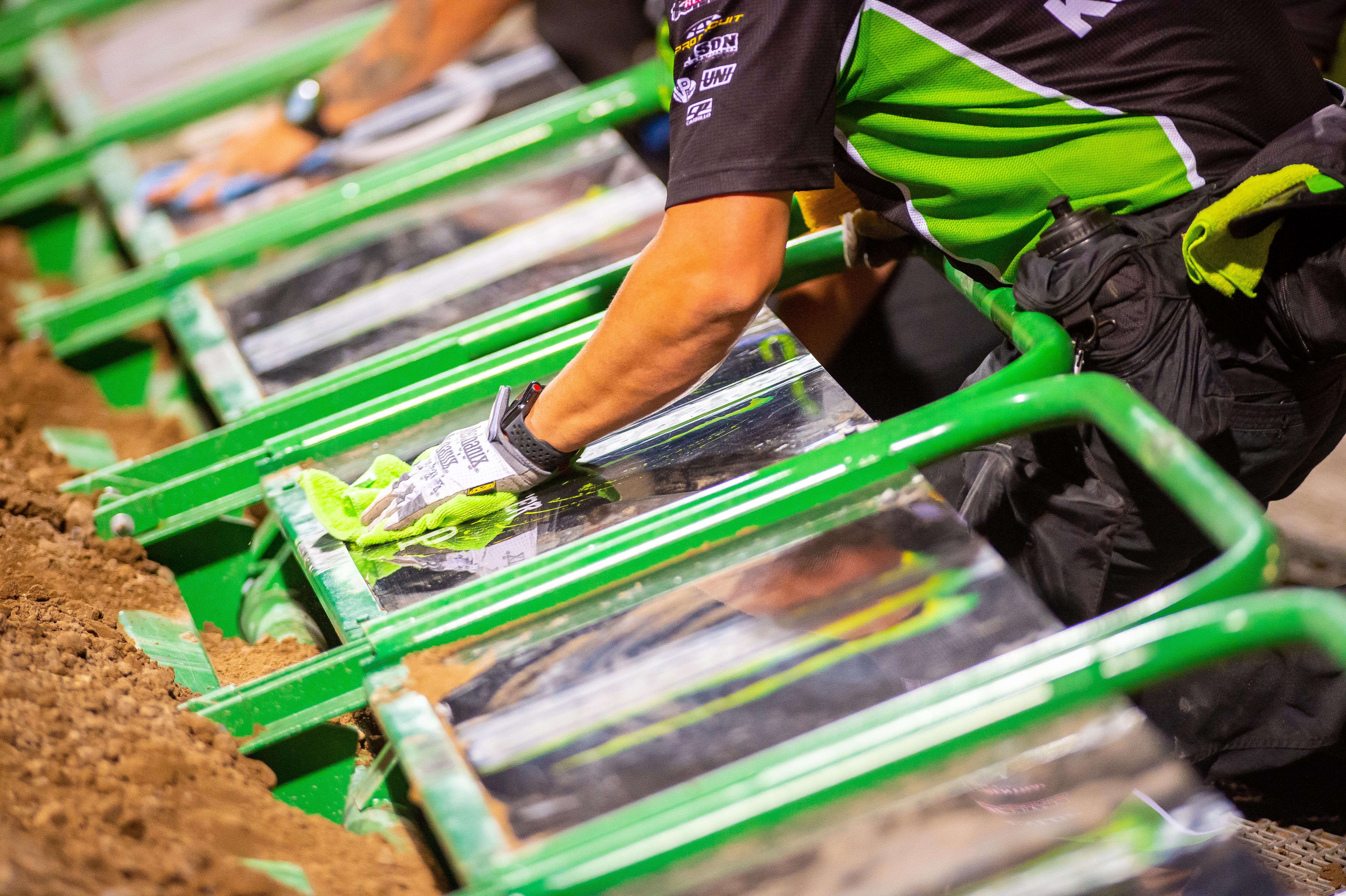 Mike Sweeney’s been a contributor for us for a while now and a guy that once got a cover shot on MXA! He’s a visual type of guy and has some ideas on how to improve the presentation of SX…take it away Mike!

One. They don’t emulate the successful formula that MotoGP and Formula One have built upon. Over the last two decades, MotoGP and Formula One racing leadership have taken their sports to unprecedented levels. They have achieved this in many ways. One of the key factors has been by making each race an event for fans of the sport. They have adopted multi-day formats, practice on one day, qualifying the next, and finally race day. They also include many great marketing – fan activation events that allow fans to interact with the stars of the sport. Each of the days leading up to race day is special; this helps build the race day drama, and drives interest amongst fans and the media.

This leads to a subcategory that should also be followed. MotoGP runs three classes, the premier MotoGP class, Moto2, and Moto3. A racer has to work their way up to the premier class from the Moto3 class. Each of these sub-classes participates in practice, qualifying, and racing on the same days as the premier class.

Supercross promoters currently run a one-day race format for two classes. They could improve things significantly by adopting two things. First, a Moto3 type class that is raced on 125cc two stroke bikes. Second, with this third class added, they could then go to a multi-day schedule that would include a practice/press day for day one, a qualifying day for day two, and race day on day three. This would make the race day broadcast more enticing in that it would only air the best competitors, competing at the highest level. If we are to attract new people to the sport, we need to ensure that the product they are being exposed to on television and the internet is the best available.

This could also benefit fans in a number of ways. With the current format, race day is a long day. Fans that arrive for practice, and stay through the conclusion of the main events are in for a 7-8 hour day. Many families that arrive early have to leave before the main events, because the kids are simply worn out. Going to a shorter, tighter schedule would help mitigate this. It would also provide a chance to sell less expensive tickets for practice day and qualifying day, meaning more opportunity and possibly more new fans that might decide to check it out after doing cost analysis.

Adding a 125 class and with it, making riders work their way to the premier class would also help build the skillsets of competitors and improve racing at the upper levels. Also, if Moto3 were any indication, it would also provide for some great, entertaining racing.

Two. They don’t film it like it’s the unique sport that it is. Recently I was thumb-scrolling Instagram and I came upon a post by Glen Helen Raceway. It was a video, shot at ground level, showing the hillside straights of Glen Helen. As it was shot at ground level, it did a great job portraying how steep those hills really are. Cameras tend to flatten things out, and make things look less steep. Ask anyone who has been to Unadilla and stood on the edge of Screw-U looking down, how it compares to what you see on television and they will likely tell you that it isn’t close.

It’s the same with Supercross. Ask anyone who has stood on the floor of a Supercross race how it compares to what you see on television. They will note that it’s not even close. The bikes fly tremendous, jaw-dropping distances at great heights, and the speed carried by the competitors is incredible.

So, why are promoters filming SX like they film football and baseball? They use many of the same camera positions and cameras that are used to broadcast the stick-and-ball sports. By doing so they “flatten” the sport. Overhead cameras are great for painting the big picture but they completely fail to show what is unique and great about the sport of Supercross. Going back to the success of MotoGP and F1, an easy step to make improvements would be to mount cameras with analytics showing speed and lean angle onboard race bikes and riders. Can you imagine how cool it would be to have the lean angle indicators that MotoGP bikes have on SX bikes? Recently Repsol Honda rider Marc Marquez made the news and blew up social media by hitting physics-defying and new record lean angle of 67 degrees in a corner. Imagine knowing what angle a SX racer is leaned over at while railing a berm, scrubbing a jump, or doing a whip! (And the possibilities that could open for marketing.)

They could also include more low camera angles on the stadium floor utilizing wide-angle lenses. Getting away from the long lens-high angle shots would greatly improve the visual package presented and broadcast to viewers. Personally, I would love to see the producers consult with long-time MX/SX photographers like Simon Cudby, GuyB, and the guys from Octopi Media. They create amazing images and have a wealth of knowledge that should be embraced and adopted by television producers.

Three. They don’t broadcast some of their most important races at an optimal time. It’s no secret that the first two or three rounds of Supercross are usually the best. They feature the deepest field of competitors and emotions are high as possibilities for the season are an open book. These races typically take place in the Pacific Time Zone, meaning that the first qualifying races are starting at 10:00 PM Eastern, with the main event starting well after midnight on the East Coast. This pretty much guarantees poor ratings and that only the most ardent fans are watching. We definitely are not attracting new viewers by broadcasting the best races well after midnight.

A few seasons back, SX promoters made a great call in that they scheduled a daytime race at the Meadowlands with a 3:00PM start time. This was broadcast live on NBC and by all accounts was a great success. Since that time, it has made me wonder why these same promoters refuse to start the races on the West Coast at 5:00PM local?  This would ensure that a huge percentage of TV viewers who live on the East Coast would be more likely to watch and could provide a great boost to ratings. Other than diminishing the opening ceremonies for those in attendance at the stadium, is there a down side? I can’t think of one.

Four. They don’t use track barriers that are effective, or enhance safety. I would love to see a scientific study proving that Tuff Blocks provide any benefit to riders and their safety. If anything it might be possible to prove that they actually cause crashes and injuries. Sorry to beat the MotoGP/F1 horse to death here, but once again, I think we can improve by emulating what they are doing.

F1 and MotoGP currently have a low, wedge-shaped border of textured concrete lining their tracks. Outside of that they have additional layers that have greatly improved safety, but we won’t get into those as SX tracks don’t have room to adopt them. However, getting back to that wedge shaped first barrier. Tuff Blocks as we know them should be redesigned to emulate this low and flat wedge shape. They would be approximately 2-3 inches thick on the low side, and 6-8 inches thick on the high side. The length would be the same as current Tuff Blocks, and Velcro could connect them. Going to this low-profile wedge shape would allow riders to land on them without crashing, while still providing distinct division of the lanes. They would also still be able to include sponsor logos that would be visible on camera and to the fans in attendance. Another benefit, they could provide a padded spot for a rider to land on in the event of a crash.

By embracing positive change the sport of Supercross could move forward and reach new heights. Personally I think it’s well past time to look at everything and make decisions that will provide a much better television experience, while enhancing rider safety. They could start with small changes like improved start times and Tuff Blocks, and go from there.

I hope that promoters take note and discuss some of these things moving forward. Supercross is a tremendous sport that I care deeply about. I would love to see it bigger and better than ever in the years to come.