Sunday, Sunday, Sun… I mean Wednesday. It’s been fun watching races on a Wednesday. As we all know (thanks Ralph), Wednesday is the day that Cooper Webb wins. He’s now undefeated on Wednesday’s with 3 victories and that ties him with Eli Tomac for the most all-time wins in Salt Lake City. As impressive as Webb’s ride was (did you see that turndown on Osborne!?), it was once again Eli Tomac that put on a show and came from last place to finish 2nd (be sure to check out his start here). In the process he set the fastest lap of the race and all but solidified his first premier class championship.

In the history of supercross, there’s only 2 instances where the leader of the series has lost the championship at the last round. Broc Glover lost it in 1985 and Damon Bradshaw in 1992. In 1985, the series was only 11 rounds long and Broc Glover held a slim 1 point lead over Jeff Ward entering the final round of the championship, 211 vs. 210 points. At the final round in Pasadena, CA, Jeff Ward finished 4th and Broc Glover finished 5th. It wasn’t without it’s controversy though as you can read in the excerpt below from Cycle News.

In 1992, the series was 16 rounds long and Damon Bradshaw held a narrow 6 point lead over Jeff Stanton entering the 16th and final round of the championship. Jeff Stanton won while Damon Bradshaw struggled to a 5th place finish. Not likely that Eli Tomac has a similar fate given his 22 point lead, but interesting to take a quick look back at history. 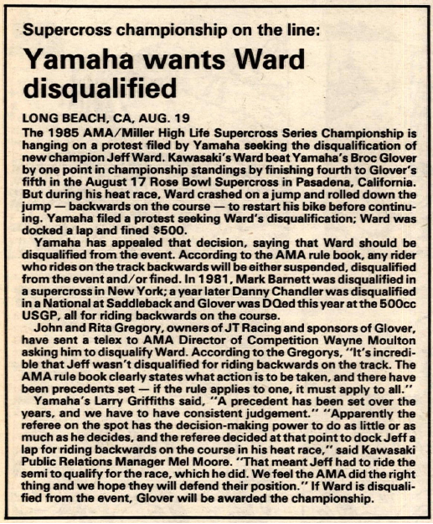 Eli Tomac is about to solidify his name amongst the best the sport has ever seen. This will be his 2nd supercross championship in 10 attempts. Maybe most impressive is that he’s finished 2nd in supercross championships on 5 other occasions. He sits tied with Ryan Dungey for 6th on the all-time wins list with 34 wins. That’s 30% of the 113 main events he’s entered. He actually holds 6th outright in total supercross wins with 45 and the names in front of him on this list are McGrath, Stewart, Carmichael, Villopoto, and Reed. Add in that he has 4 motocross championships, sits 6th in overall motocross wins (35), and 9th in moto wins (68 with a chance to be in 3rd at the end of this season), Eli Tomac is amongst the best we’ve ever seen.

While I’d love to see Eli Tomac win his 35th on Sunday night, I’ll be cheering for Zach Osborne to get his first win before we #TakeItOutside and start the outdoor nationals. While Zach’s first 10 rounds weren’t what he hoped, the last 6 rounds have been among the best of the best. I’d love to see that hard work pay off and see what confidence can do when he starts a bid for the Pro Motocross series championship.

Who’s excited for the east/west shootout on Sunday!? With two championships on the line, you couldn’t ask for more potential drama. Chase Sexton is leading Shane McElrath by 6 points and Dylan Ferrandis is leading Austin Forkner by 7 points. Both Forkner and McElrath will need to finish 3 positions in front of Ferrandis and Sexton to win the championship. Considering there are 7 different teammates across these 3 teams, Colt Nichols, Justin Cooper, Jett Lawrence, Hunter Lawrence, Christian Craig, Jo Shimoda, and Cameron McAdoo that could potential factor into the results, we’re likely to see some fireworks on Sunday.

Hope you enjoyed this weeks version of Advanced Analytics. Check out the Round 16 key stats and box scores for each class below. As always, drop me a line on Twitter or Instagram @3lapsdown with any questions or just to bench race. Hope you enjoy the analysis (especially the NBC Sports crew).